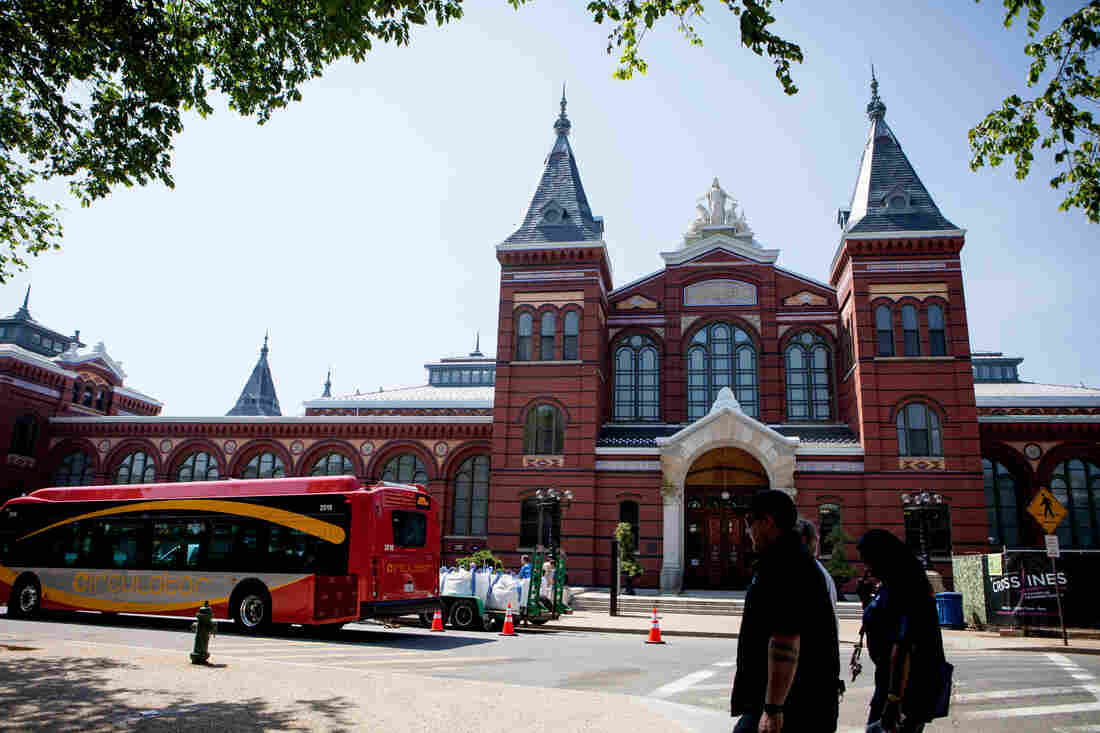 The Smithsonian's Arts and Industries Building first opened to the public in October 1881, though back then it was known as the U.S. National Museum. Ariel Zambelich/NPR hide caption 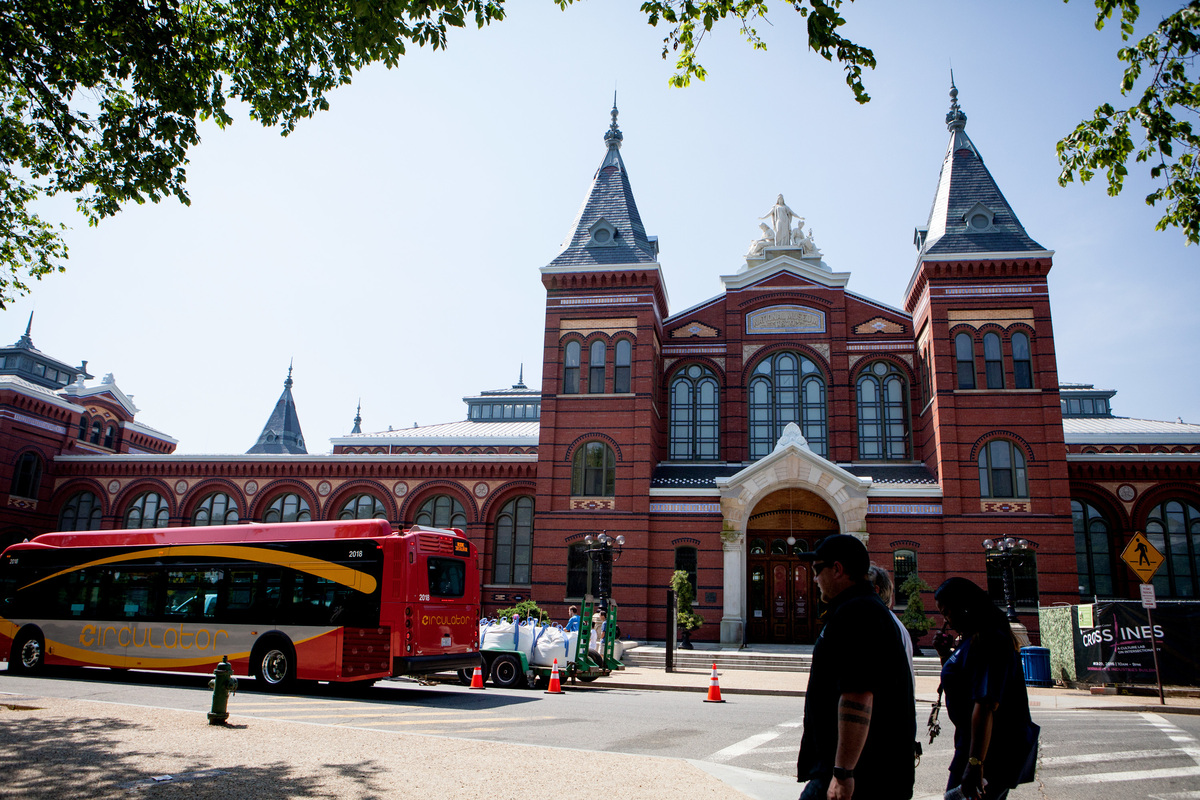 The Smithsonian's Arts and Industries Building first opened to the public in October 1881, though back then it was known as the U.S. National Museum.

There's no denying it: The architecture on the National Mall commands a kind of weighty reverence. From the neoclassical columns of the Capitol dome to the immense, white marble of the Lincoln Memorial, charm does not seem to have been the design goal for the nation's front lawn. Save for one standout: the Smithsonian's Arts and Industries Building, which, until this summer, had been chained shut for years.

With its colorful facade, arched windows, spires and rotunda, the A&I (as it's often called) is a festive relief. Even the building's next-door neighbor, the brownish-red Smithsonian Castle, feels somber by comparison.

But despite the perky building's popularity, its reopening was hardly grand. Why so little fanfare? Lack of funding seems to be one explanation.

"Unfinished character is one of its charms"

One of the A&I's most striking features is its colorful, ornate artwork: geometric patterns on tiled floors and arabesque-like friezes that frame interior arches. According to a Smithsonian report on the building's history, the stenciled decorations were inspired by the work of designers Owen Jones and Auguste Racinet and have Moorish, Greek and Byzantine influences. Smithsonian Acting Provost Richard Kurin believes these flourishes point to the building's Victorian origins, "and what you saw in Victorian England is taking — almost appropriating — different cultural styles from around the world," he says. 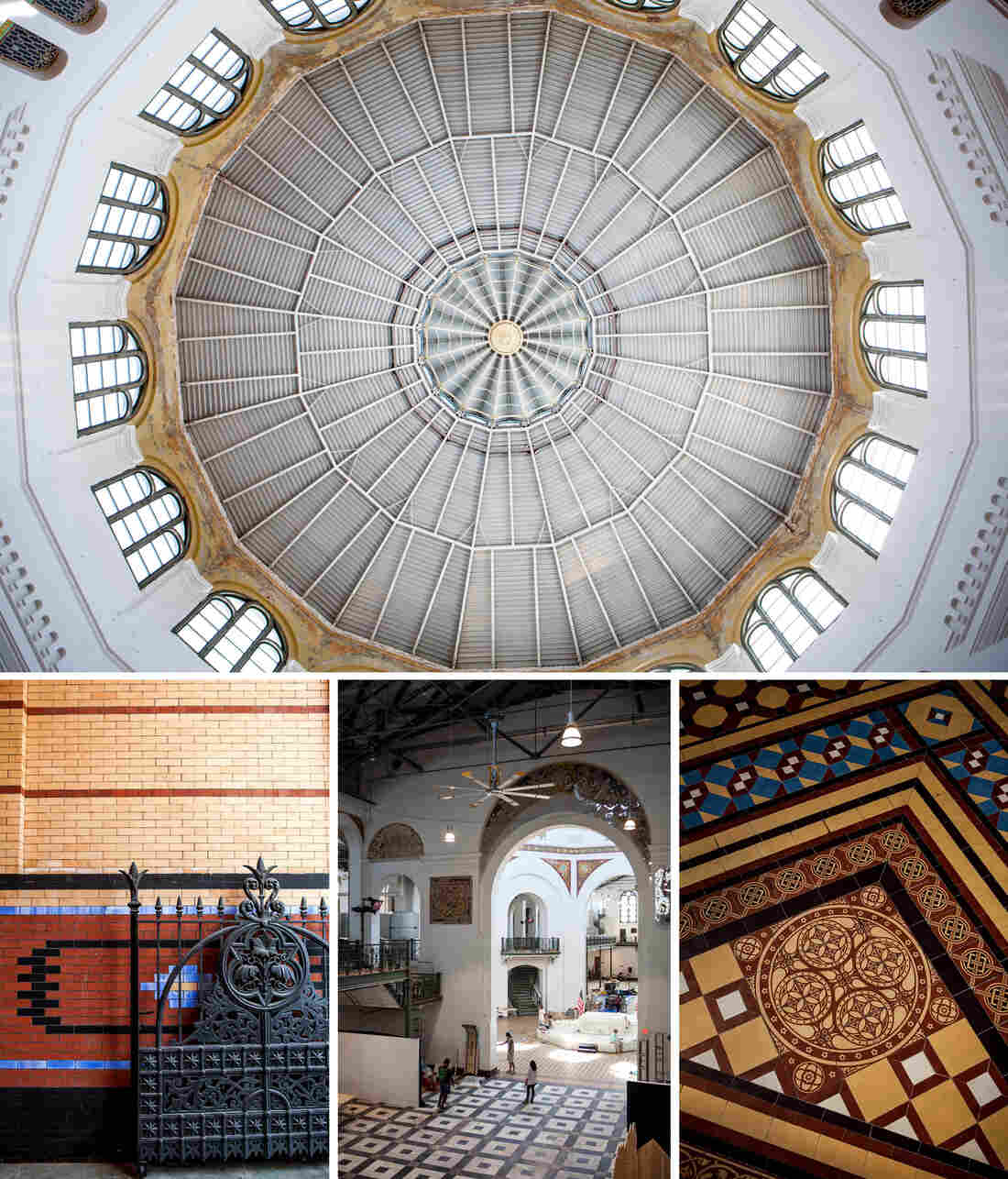 (Above) A detail of the building's rotunda. (Below) From the geometric patterns on its tiled floors to the friezes that frame interior arches, the Arts and Industries Building is an architectural hodgepodge of Moorish, Greek and Byzantine influences. Ariel Zambelich/NPR hide caption

But upkeep of this 135-year-old building has been costly. After an enormous, 2003 snowstorm collapsed the roofs of two similarly aged buildings in the area, the Smithsonian did an emergency inspection. Christopher Lethbridge, the building's project manager, says the roof turned out to be fairly solid, "but by that time the plumbing systems, the electrical systems, the mechanical systems, were all beyond repair." The Smithsonian's Board of Regents decided to close the building.

At that point, Lethbridge says, the A&I had all parts of the Smithsonian in it: archives, public relations, a day care and even temporary exhibits. About 500 employees were all relocated, including Isabel Lara, who worked for the Smithsonian Latino Center. (She now works in NPR's communications division.) "I loved that at lunchtime I could eat in a room with a view of the [Folger] Rose Garden and the carousel on the Mall," she says. But the building was in disrepair: "There were cracks in the tiles, leaks when it rained, and mice if you worked late. The offices had random mismatched furniture and remnants of old artifact labels in hidden corners. It really did feel like 'the nation's attic.' " 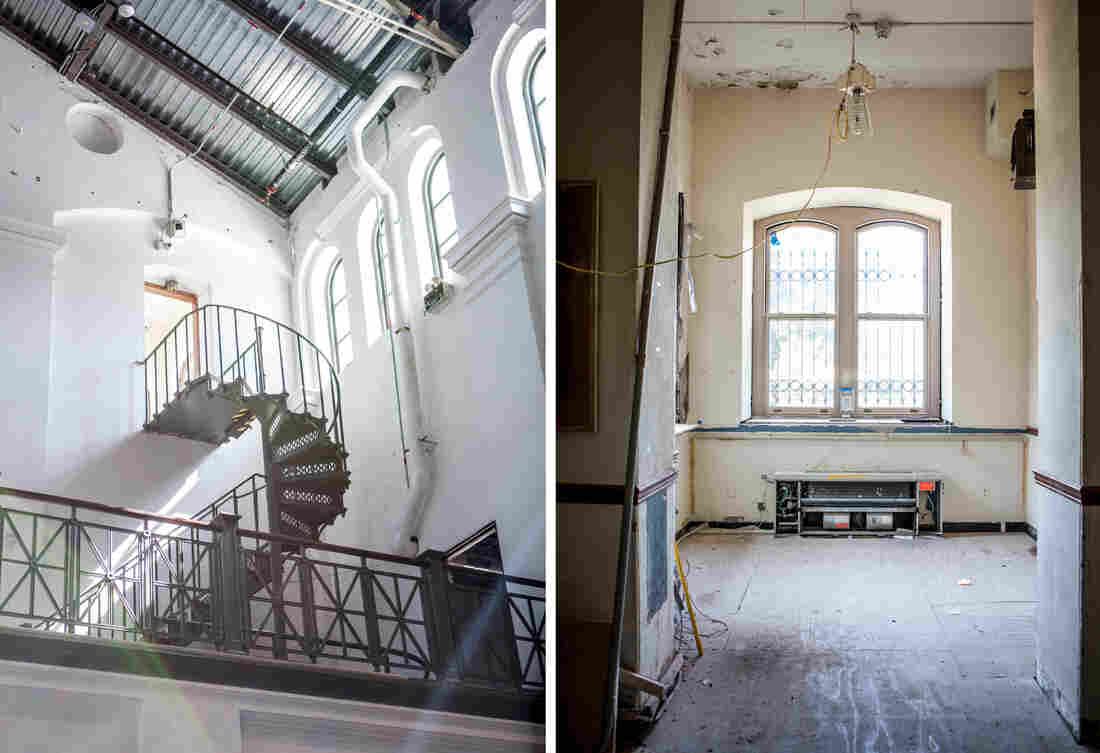 The Arts and Industries Building is still a work in progress: The ceiling isn't yet fully restored and the entire second floor remains closed to the public. Ariel Zambelich/NPR hide caption

When Lara recently visited the A&I for this year's Smithsonian Folklife Festival, she noticed the ceiling wasn't fully repaired and the second floor was closed. For many years, Lethbridge says, they had only enough money to relocate staffers and close the building. "We had no funding to go further than that," he says. Then, in 2009, the Smithsonian received $25 million from the American Recovery and Reinvestment Act, and some of that went toward the A&I.

"We got funding to restore the exterior of the building," Lethbridge says, "and that entailed really rebuilding the roof, but retaining the original structure, and replacing the 900-plus windows, no two of which are exactly the same size, we found. But still no more funding for restoring the interior."

A Smithsonian spokesman says that will take an additional $81 million.

(Left) A crew removes the South Hall monitor roof in 2011. (Right) During the renovations in 2010, all of the building's windows were replaced with energy-efficient units matching the appearance of the originals. Ed Wahl, Richard Strauss/Smithsonian Arts & Industries Museum hide caption

For Kurin, the building's "unfinished character is one of its charms." He says, "It's clear that it's an old building. It hasn't always been as gently used as we would like. But that's an important part of our history — Smithsonian history and American history."

The story behind the A&I is a reflection of the Smithsonian's complicated history. While today it's the world's largest complex of museums and research centers, in the mid-19th century the Smithsonian was still figuring out its future. British scientist James Smithson's bequest to the United States came with an open-ended (you might say ambiguous) mission statement: His wealth was to be used for "the increase and diffusion of knowledge." Over the decades, Smithsonian secretaries have grappled with that broadly stated goal: Should the Smithsonian emphasize public collections over scientific research? Is history and art as important as science and technology? 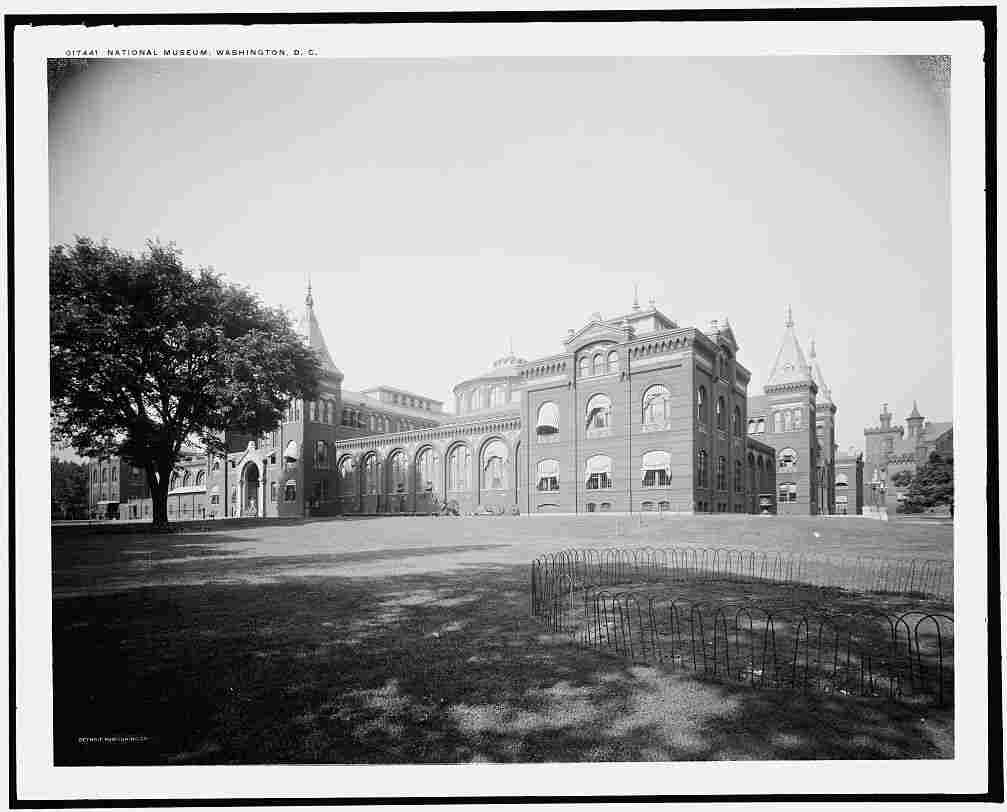 Those debates initially took place inside the Smithsonian's very first building on the National Mall: the Castle, which was completed in 1855. The first Smithsonian secretary — Joseph Henry — was a leading physicist whose heart was in scientific research, discovery, studies and publications. He wasn't too keen on accumulating artifacts, a position that was reinforced in 1865 when a terrible fire destroyed the Castle's roof along with scientific articles, books, artwork and most of Smithson's personal effects.

Henry's assistant secretary, Spencer Fullerton Baird, felt differently. He was a naturalist and ornithologist who showed up for his first Smithsonian job with two railroad cars full of his own collections. According to Smithsonian archivist Pamela Henson, Baird (who became secretary when Henry died) "quietly but relentlessly continued to amass natural history collections." He eventually persuaded Henry to ask Congress for money to build a museum. Everyone agreed it needed to be fireproof, which meant brick and iron. 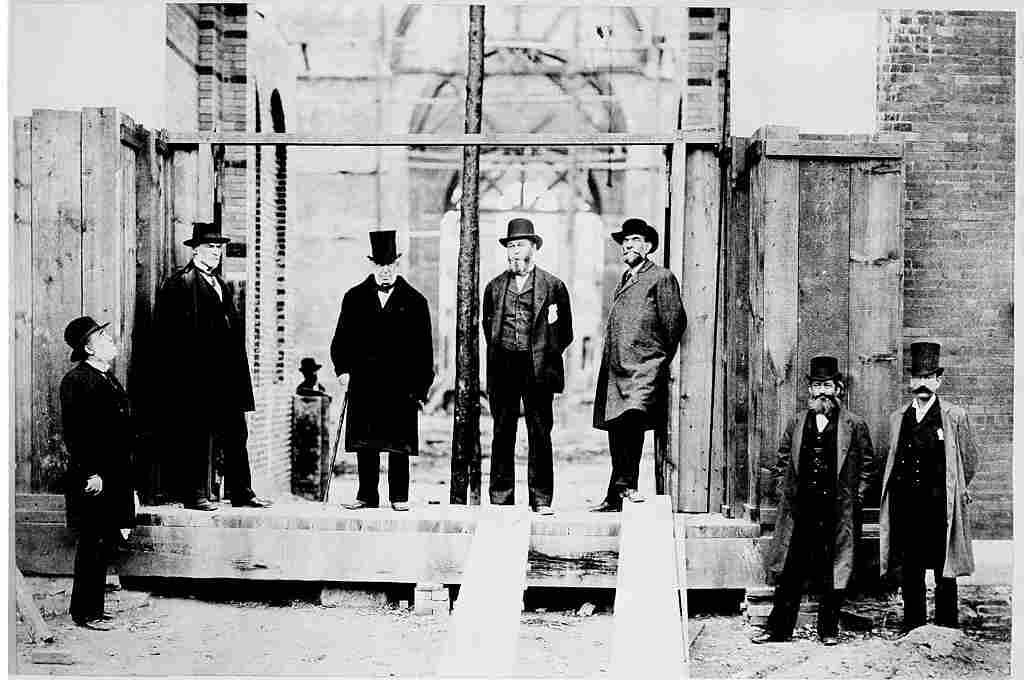 The architects for the U.S. National Museum, as the A&I was originally called, were two German-born Americans (Adolf Cluss and Paul Schulze), and the oversight committee included two Civil War heroes (Gen. Montgomery C. Meigs and Gen. William Tecumseh Sherman). They all went to great lengths to both fireproof the building and stick to Congress' budget. "It's still the cheapest government building ever built," says Lethbridge. 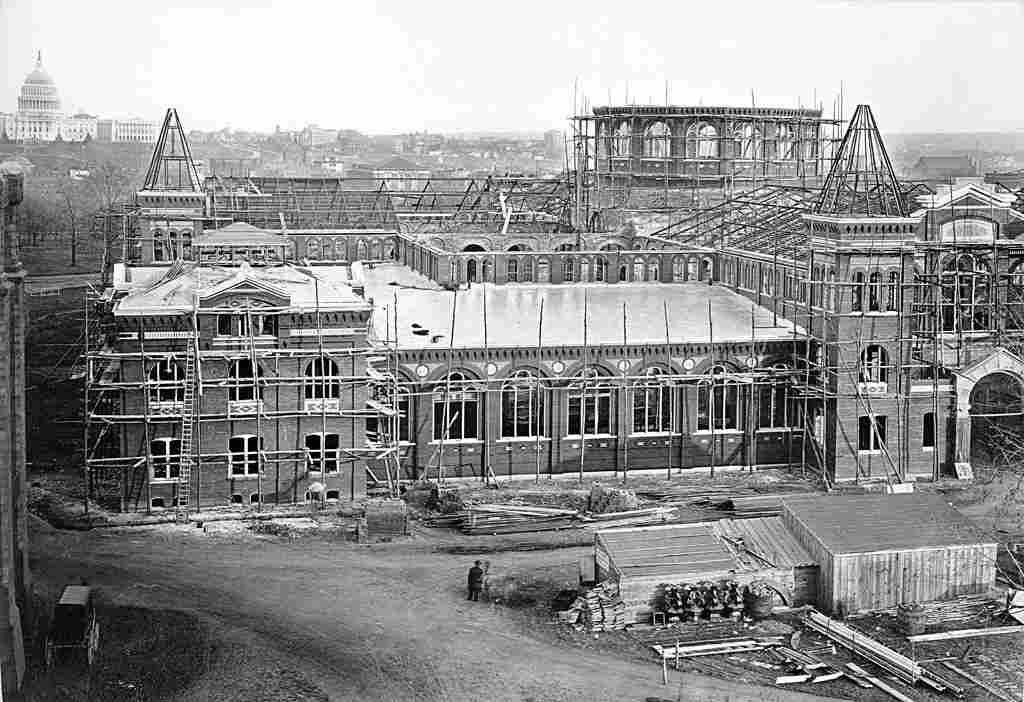 The Arts and Industries Building, shown while under construction in 1879. Smithsonian Institution Archives hide caption 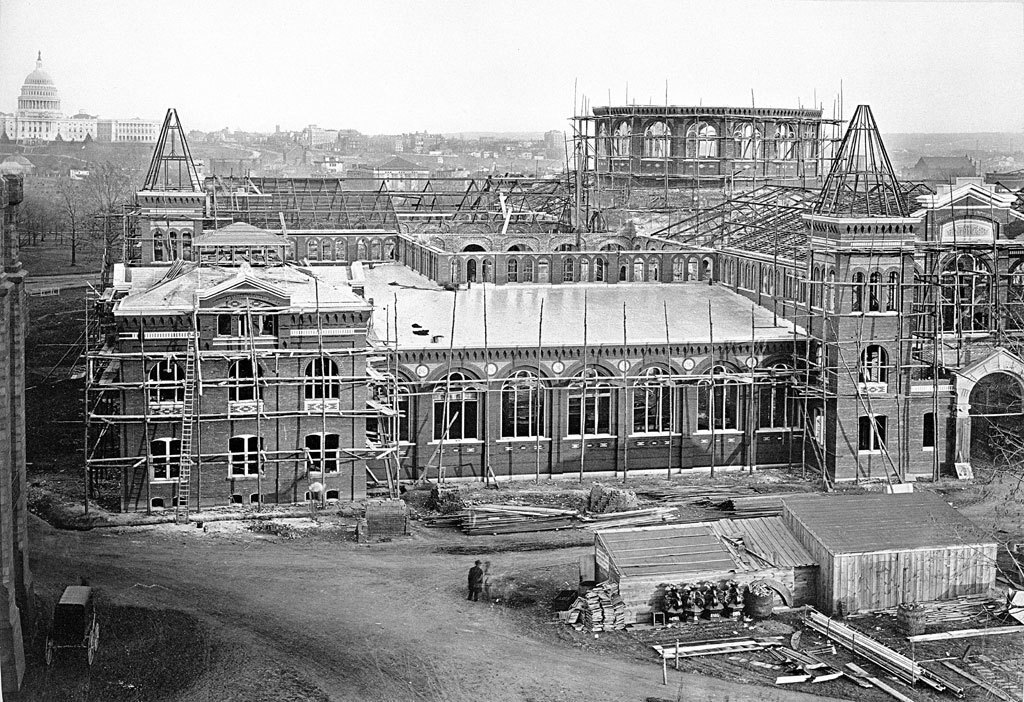 The Arts and Industries Building, shown while under construction in 1879.

This was an era when America was eager to prove itself. Kurin says the U.S. "wanted to show that we weren't a frontier nation anymore. We were developing in terms of our industry, the progress of democracy, the industrial revolution, and how we are becoming really a world nation post-Civil War." The Smithsonian was part of that effort — and so was the 1876 Philadelphia World's Fair. Baird produced award-winning exhibits for the fair. They highlighted the Smithsonian's scientific research prowess and explored North America's rich natural resources. Eventually, Baird persuaded the other Philadelphia exhibitors to donate their displays to the Smithsonian, forming the basis of the museum's first collection.

(Left) The original plaster model of Thomas Crawford's Statue of Freedom, which sits atop the dome of the U.S. Capitol, was displayed in the Arts and Industries Building's rotunda for several decades beginning in 1890. (Right) A view of the building's Paleontology and Comparative Anatomy Exhibit from the 1880s shows the skeletons of mammals, marine mammals and a giant sloth. Smithsonian Institution Archives hide caption 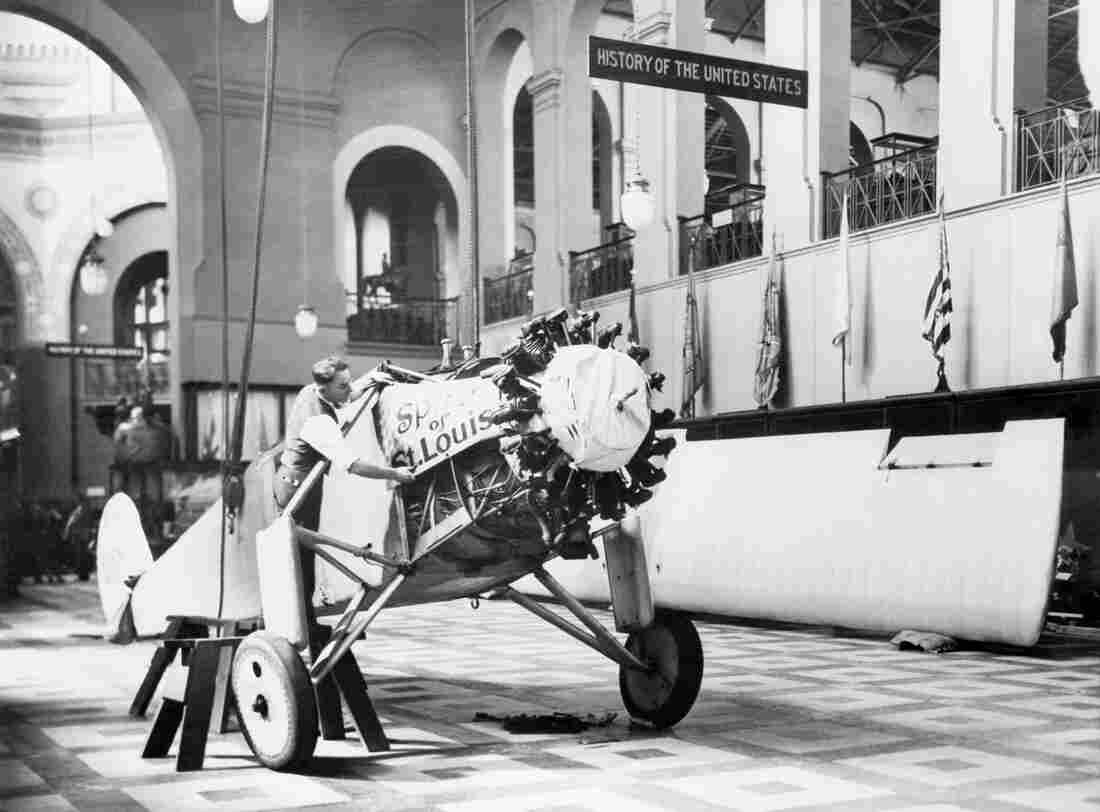 In 1928, when Charles Lindbergh gave his Spirit of St. Louis to the Smithsonian, it was first displayed in the Arts and Industries Building. Here a Smithsonian worker reassembles the plane near the building's rotunda. Bettmann Archive/Getty Images hide caption

The U.S. National Museum finally opened to the public in October 1881. (It was renamed the Arts and Industries Building in 1910.) Electricity was only just coming online, so the building opened with two electric lights and 3,000 gaslights — and of course a fireproof iron roof. Zoology, anthropology, history, art and technology were all represented in a vast array of displays and glass cases. Among the first items in the museum were George Washington's uniform and sword, skeletons, musical instruments and a family of buffaloes.

Kurin says, "This museum was the incubator for many other museums — our Natural History Museum and Air and Space." In 1971, it was named a National Historic Landmark, and in 2006, it made the list of America's Most Endangered Historic Places by the National Historic Trust for Preservation. The trust said it was "a dramatic exhibition space until it was shuttered in 2004 after years of neglect and underuse." 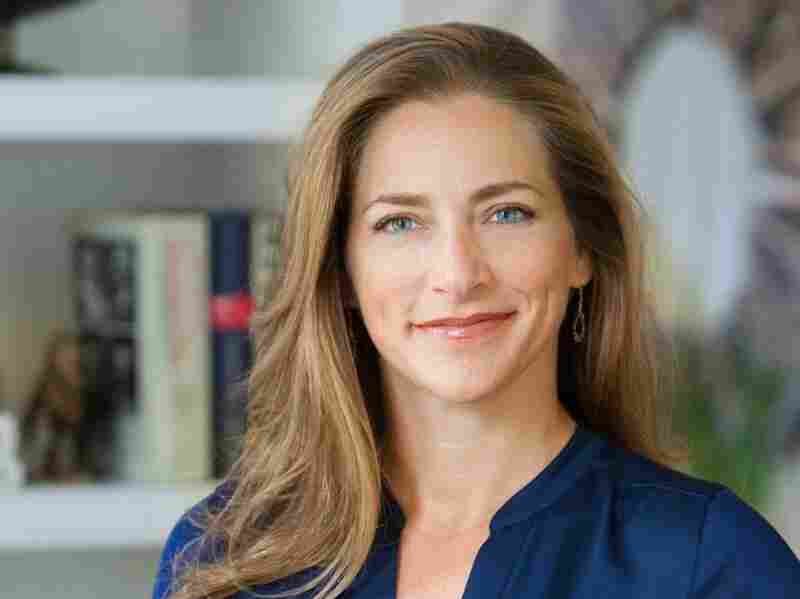 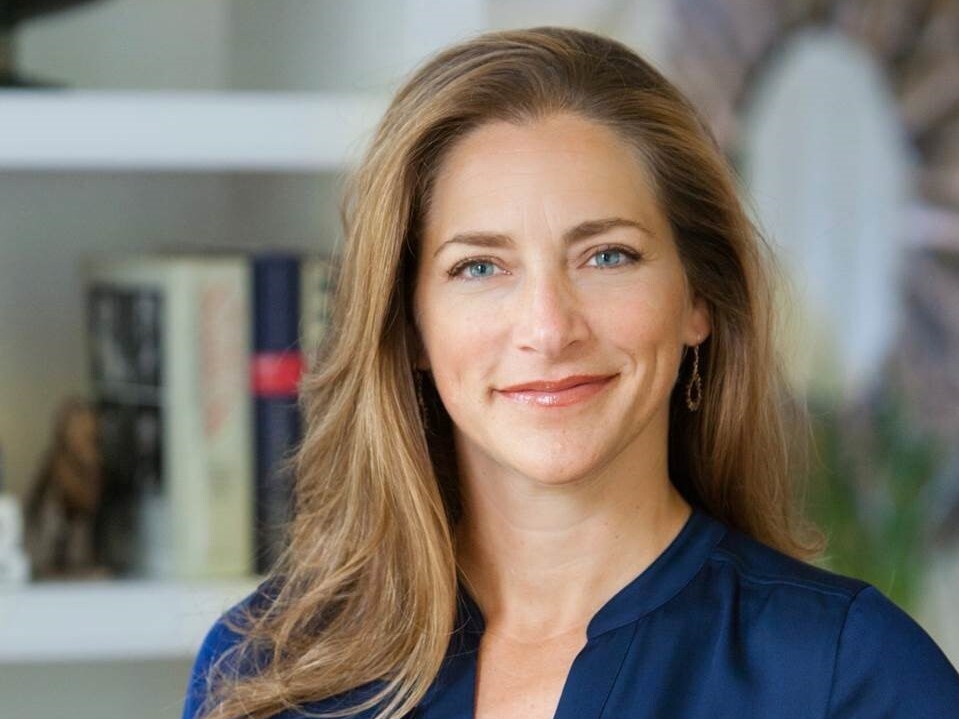 Monday was Rachel Goslins' first day as the Arts and Industries Building's director.

Smithsonian Secretary David Skorton recently announced a new director for the building: Rachel Goslins, the former executive director of the President's Committee on the Arts and the Humanities. Goslins says she is "thrilled to be joining the Smithsonian and to help write the next chapter for this amazing building," according to a press release. Her first day on the job was Monday.

In that same release, Skorton says the Smithsonian plans to use the Arts and Industries Building "as a place for educating and inspiring Americans about the impact of creativity and innovation on our society."

According to Kurin, there are many ideas about the future of the A&I, among them that it be used for the National Women's History Museum or the National Museum of the American Latino. But because the A&I is a federally funded institution, Kurin says, "Congress is going to have to decide the ultimate disposition of this building."

For now, the building will open only for pop-up exhibitions and special events. The rest of the time, visitors may still find the doors to the most cheerful — and second oldest — of the Smithsonian buildings locked.

Nicole Cohen contributed to this report.