Accessibility links
Book Review: 'The Couple Next Door,' By Shari Lapena Shari Lapena's novel about a couple whose baby daughter goes missing while they're at a dinner party next door strikes at the heart of parenting fears — but falls down as a police procedural.

'The Couple Next Door' Ratchets Up Parenting Paranoia

'The Couple Next Door' Ratchets Up Parenting Paranoia 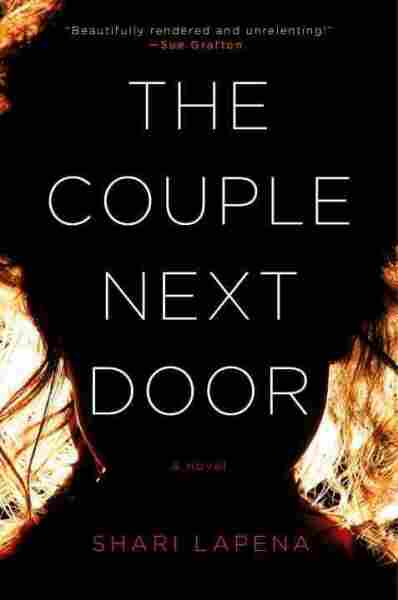 The Couple Next Door

Novels about missing children aren't, well, novel — but there's a special terror for anyone who has loved a baby when the missing child is an infant, unable to walk or climb or otherwise toddle into danger. Shari Lapena's The Couple Next Door examines the blind fear a couple in upstate New York experience when they return from a dinner party (yes, next door) and discover their beloved daughter is no longer in her crib.

LaPena sets the scene and gets the action quickly: Anne and Marco Conti have accepted an invitation from their neighbors Cynthia and Graham, leaving their 6-month-old, Cora, asleep. Anne clutches a baby monitor as if it's a lifeline. "She wonders what the other mothers in her moms' group would think if she ever told them. We left our six-month-old baby home alone and went to a party next door. She imagines all their jaws dropping in shock, the uncomfortable silence."

The author excels at re-creating the words and thoughts of a helicopter mom whose spouse and friends seem hellbent on keeping her from following her own better instincts. "Just one more," Marco says. "Poor you," Cynthia says. When Anne and Marco return home and find their door ajar, it's Marco's "Maybe you forgot [to lock it]; you've had a lot to drink" that particularly rankles.

Unfortunately, since the action is fast unfolding, a police officer is on the scene before we can really see Anne become unhinged or Marco become stealthy — and Detective Rasbach has so little affect and is so little described that his words and actions seem like a ventriloquist's dummy's. "You make it sound like this was planned," Anne says, and point taken. The entire plot must have been carefully outlined, which makes for an excellent foundation.

'The Couple Next Door' could have been a look at postpartum depression and how it breaks a marriage; instead, it attempts to be a procedural.

However, each step in Rasbach's investigation is transparent, and worse: Dull. Aside from an occasional reference to his "summerweight suit" and steps that are hurried or slow, we learn almost nothing about the detective. If it were a deliberate choice to keep Rasbach opaque, it would have been more effective to have him less visible, too.

When Rasbach recedes, one of the book's strengths comes to the fore, which is the exquisitely torturous tension the Contis feel as they wait for news of Cora. No matter what secrets they have from the police, their family and friends, and even each other, it's clear that Anne and Marco both love their little girl.

What's that, you said? Parents who love their little girls wouldn't leave her alone in the house while they spend time swilling wine with "the couple next door"? It may not be front-page news, but LaPena does make you understand exactly how and why parents might make that decision: They want to relax and feel like grown-ups again. Anne has experienced postpartum depression and is exhausted from breast-feeding. And so forth.

That works. Alas, as Rasbach relentlessly unearths the secrets beneath the suburban gloss, things get a little too pat. Of course Anne's chilly, difficult parents are millionaires who can easily rustle up a ransom. Of course Cynthia is a sultry flirt, and Marco a very bad boy.

If The Couple Next Door had ended on an examination of how a small bad decision can upend lives, that would have been enough. Or if an evil scheme had been exposed, that would have been fine. What really ruins this novel of suspense is an over-the-top finale that comes out of absolutely nowhere. No spoilers, but the last three pages simply do not make sense in context.

The Couple Next Door could have been a look at postpartum depression and how it breaks a marriage; instead, it attempts to be a procedural. Trouble is, good procedural mysteries involve well-developed characters and a good deal of atmospheric detail to keep readers engaged with and tied to the action. Without those things, this book feels slim.