Barbie at the Louvre?! Sacré bleu! But it's true — the impeccably dressed blonde bombshell has her very own exhibition in Paris. As a '70s feminist, I've always disparaged that doll — a wasp-waisted, clothes-horse, sex pot. But for all the Barbie lovers out there, I paid a visit to the lavish exhibition at the Musée des Arts Décoratifs at the Louvre Palais. 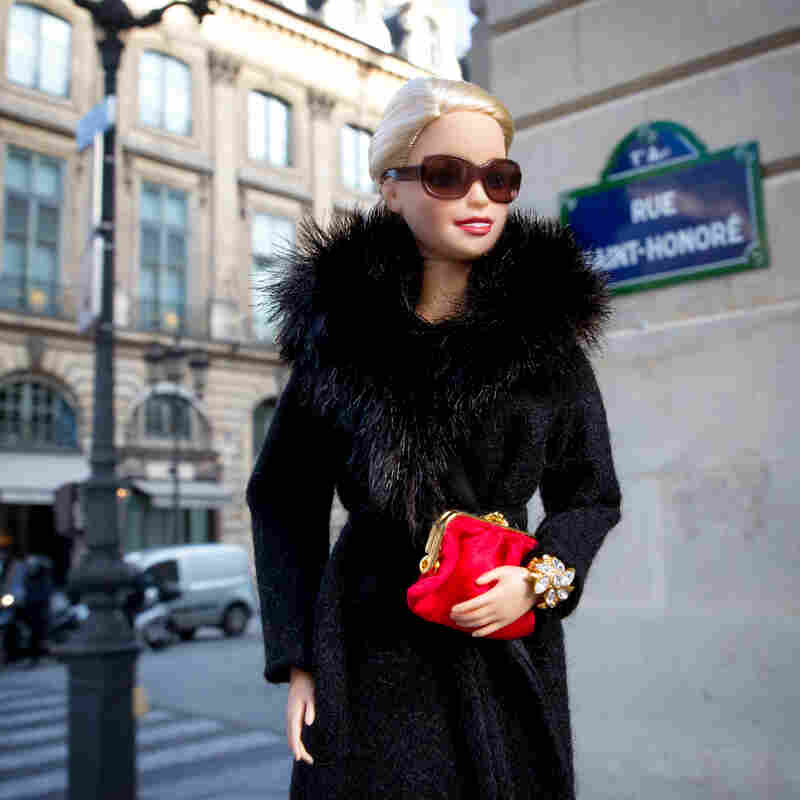 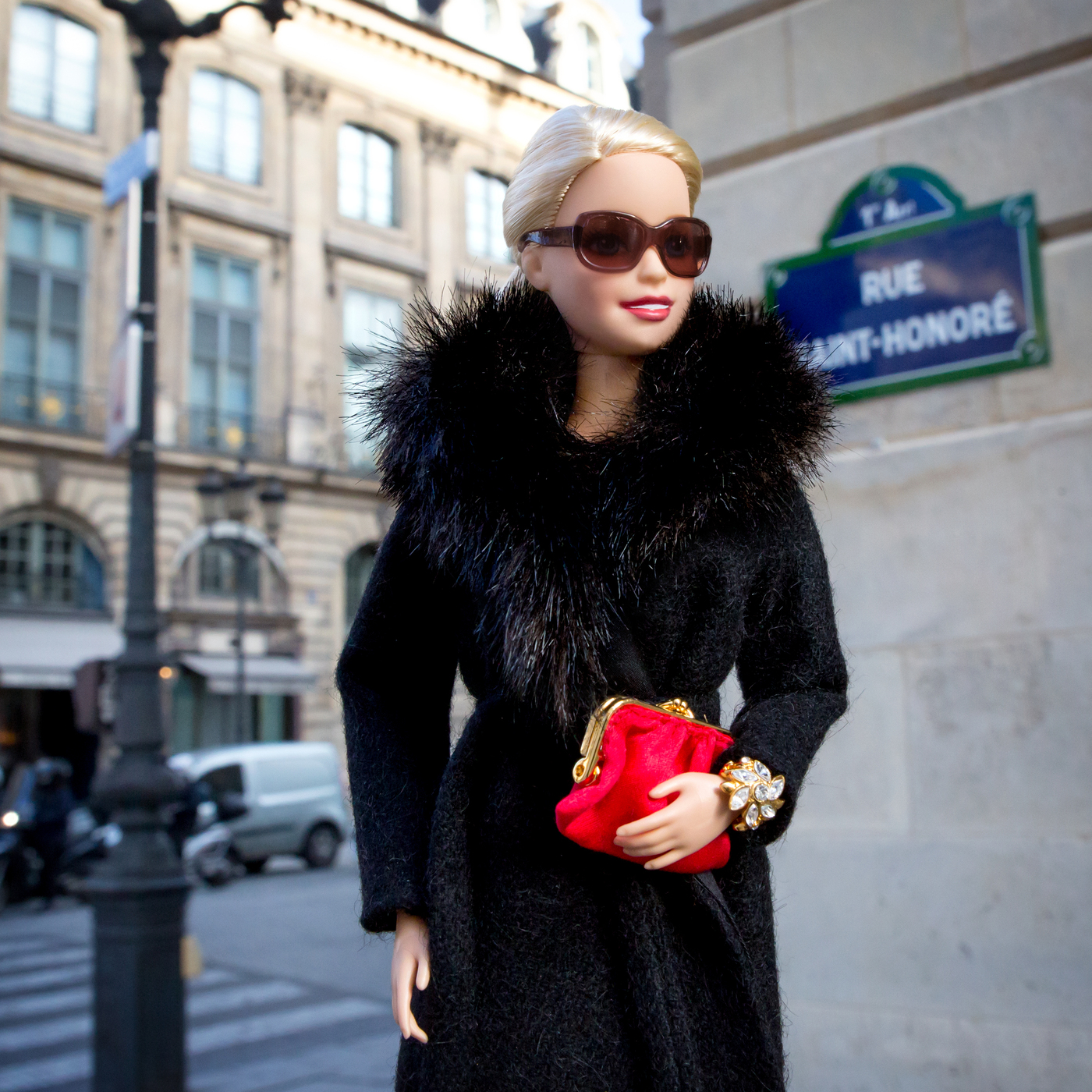 Barbie has taken over Paris — she has her very own exhibition at Les Arts Décoratifs.

Up the elegant marble stairs, past pink walls, onto a pink carpet, the visitor is met by a barrage of 700 Barbies. They reflect changes over the years, in size, shape and color. For decades, Barbie was white and "one size fits all," but today she has 27 hair colors, 14 skin tones and several different figures.

"Beauty is also about diversity," says Anne Monier, curator of the museum's toy department. "Today you cannot give a child one doll and say, This is a beautiful doll. You need to show the child different models of beauty so they can pick the one that they want to identify with."

Sure, Barbie changed as time went by. But why bring this pointy breasted, perpetually smiling, tippy-toe-ing miss to Paris?

"She is the embodiment of every change of society," Monier says. "You can see that between 1959 and today Barbie has evolved a lot." 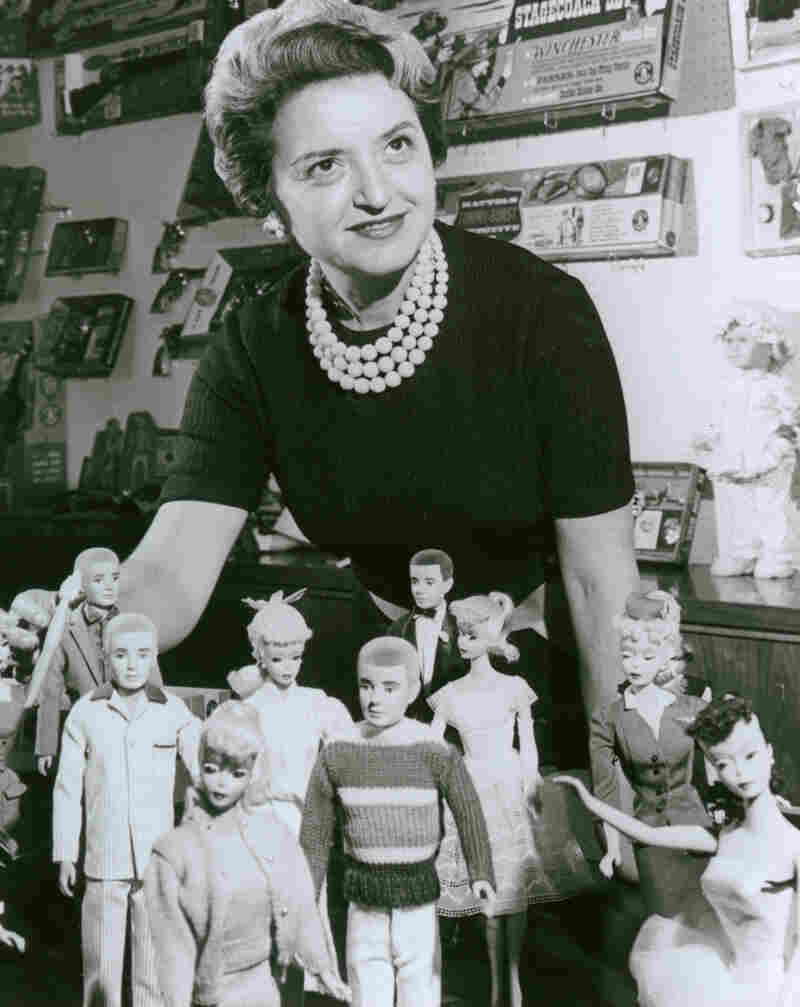 Ruth Handler was inspired to create a doll that would appeal to older girls after watching her own daughter, Barbara, dream up grown-up scenarios for her own dolls. Mattel archives/Les Arts Décoratifs hide caption 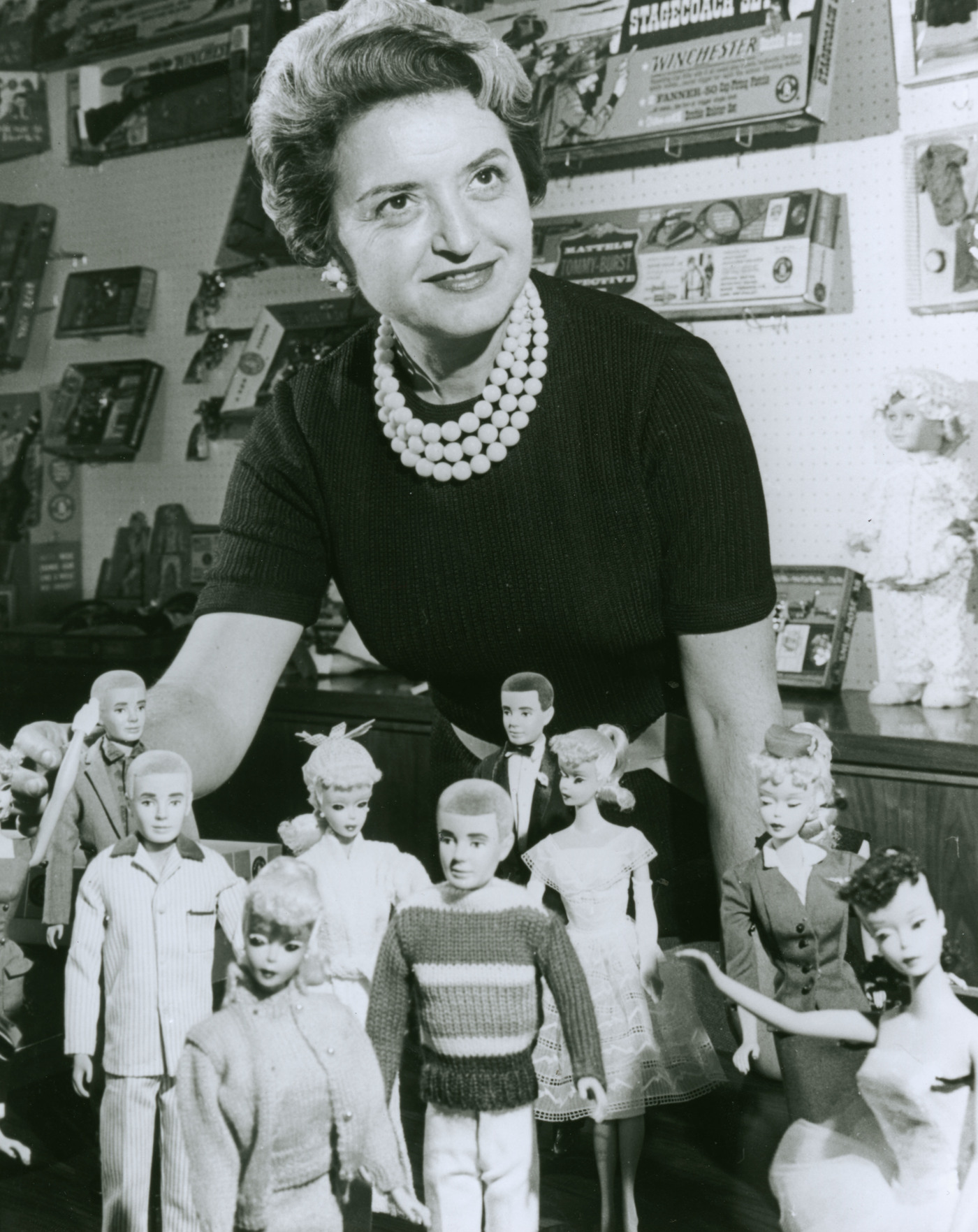 Ruth Handler was inspired to create a doll that would appeal to older girls after watching her own daughter, Barbara, dream up grown-up scenarios for her own dolls.

We've come a long way since Malibu Barbie; over the years, she's been a flight attendant, a surgeon, an office clerk, a cheerleader, a presidential candidate, a Royal Canadian Mountie, a nun and a dentist, just to name a few. In 1965, astronaut Barbie beat Neil Armstrong to the moon by four years.

When Kristen Wiig played Barbie on Saturday Night Live, she was unabashed about her unstable job history; asked about why she couldn't hold down one job and stick to it, she seriously replied, "Almost, if not every, job requires elbows."

Barbie was created by Ruth Handler in 1959. She'd noticed that young girls had only baby dolls to play with, which let them play mommy — but not much else. 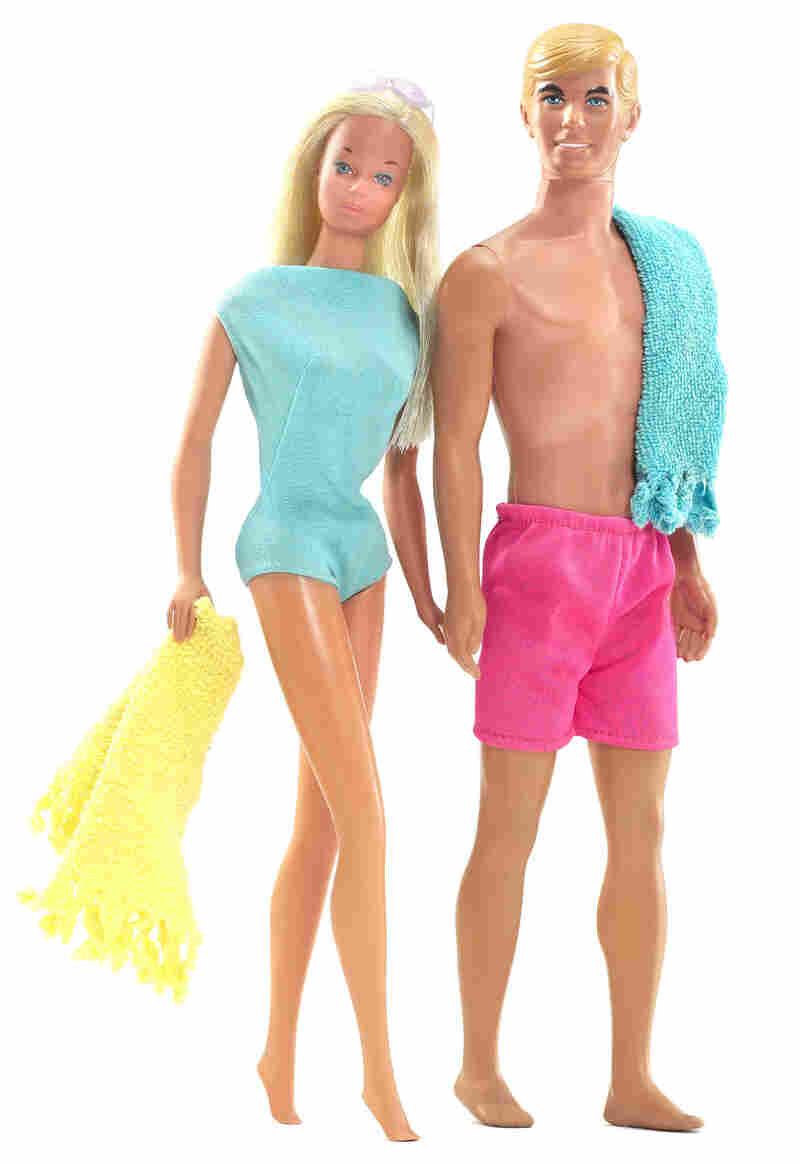 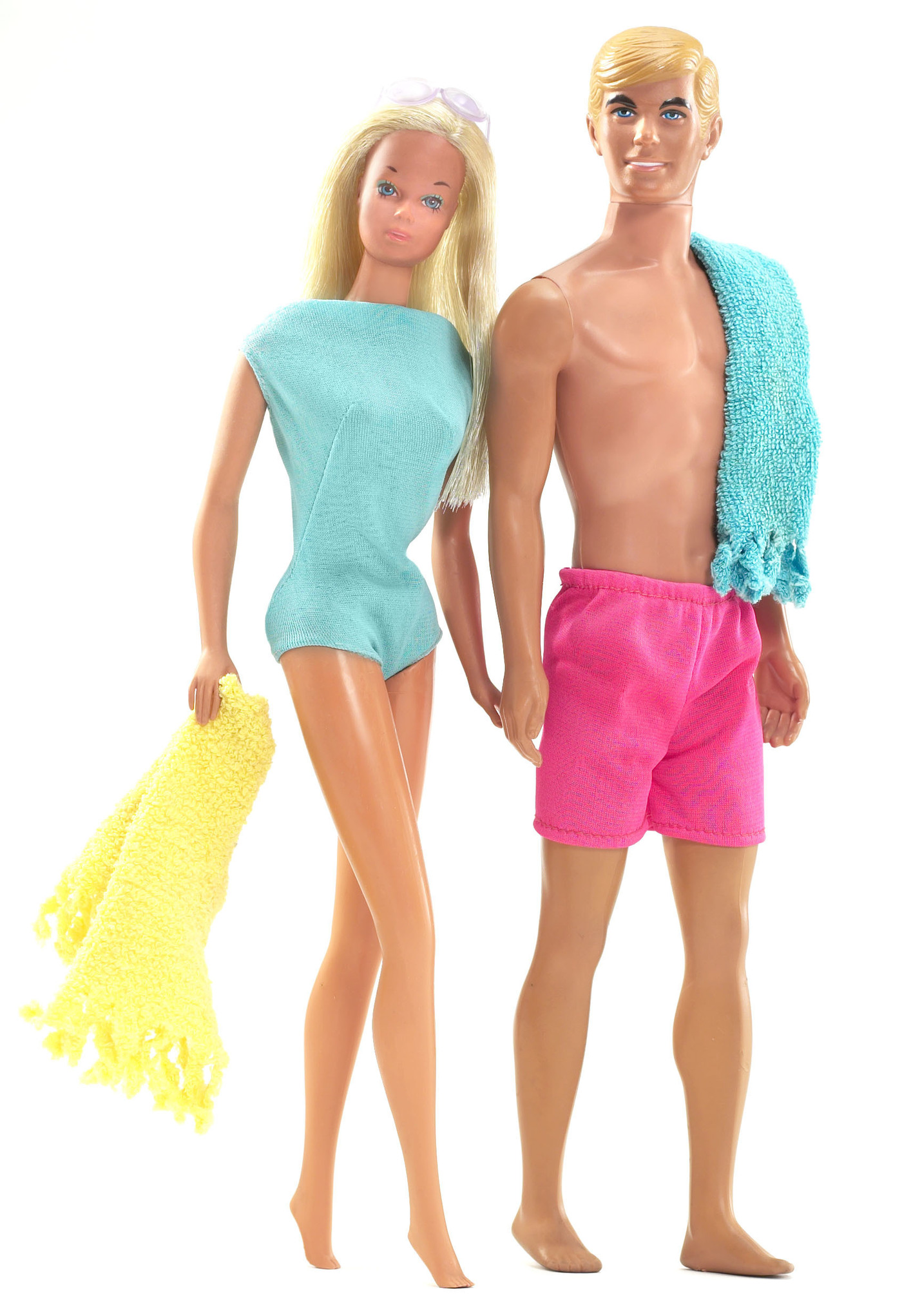 Malibu Barbie and her boyfriend Ken in the 1970s.

"Handler realized that little girls wanted to picture themselves as adults," Monier says.

Young girls look up to older girls. They want to imitate them and imagine their own futures. The very first Barbie fans were older — girls in their early teens. Today, girls start playing with Barbies at age 4, and quit by 8 or 10.

These days, you're just as likely to accessorize your Barbie with a computer as a handbag, and Mattel's business reflects these shifts. Barbie sales were plummeting but turned back up after the new, more diverse line of dolls came out in the spring.

There's Mattel money behind the elaborate Paris exhibition. It's a big and busy show — lots of sound and spectacle. Exhausting, for mature visitors — feminist grandmas, say, who still wouldn't buy Barbies for their little ones ... although they may leave with just a bit more respect. 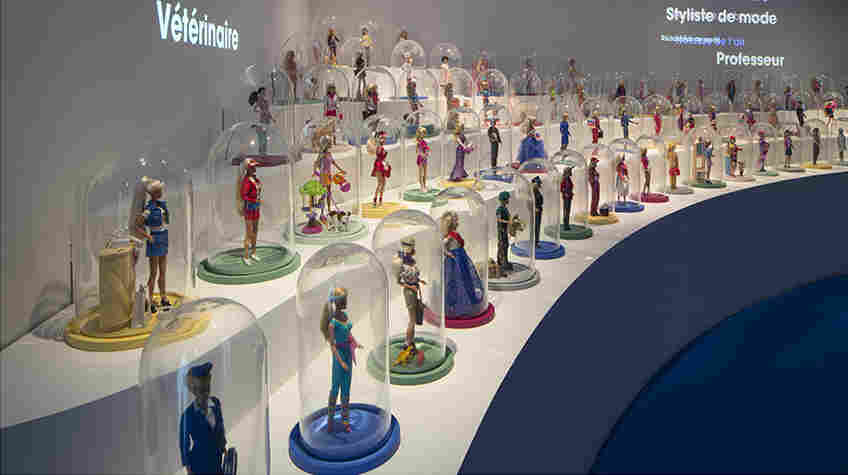 Pretty, Plastic Barbie: Forever What We Make Her

Hello, Barbie! What Do You Want To Talk About Today?