Accessibility links
After Louisiana Floods, A Photographer Finds Resilience Photographer Collin Richie and three colleagues have been shooting portraits of people who were impacted by the floods in Louisiana. The images focus on what people were able to save. 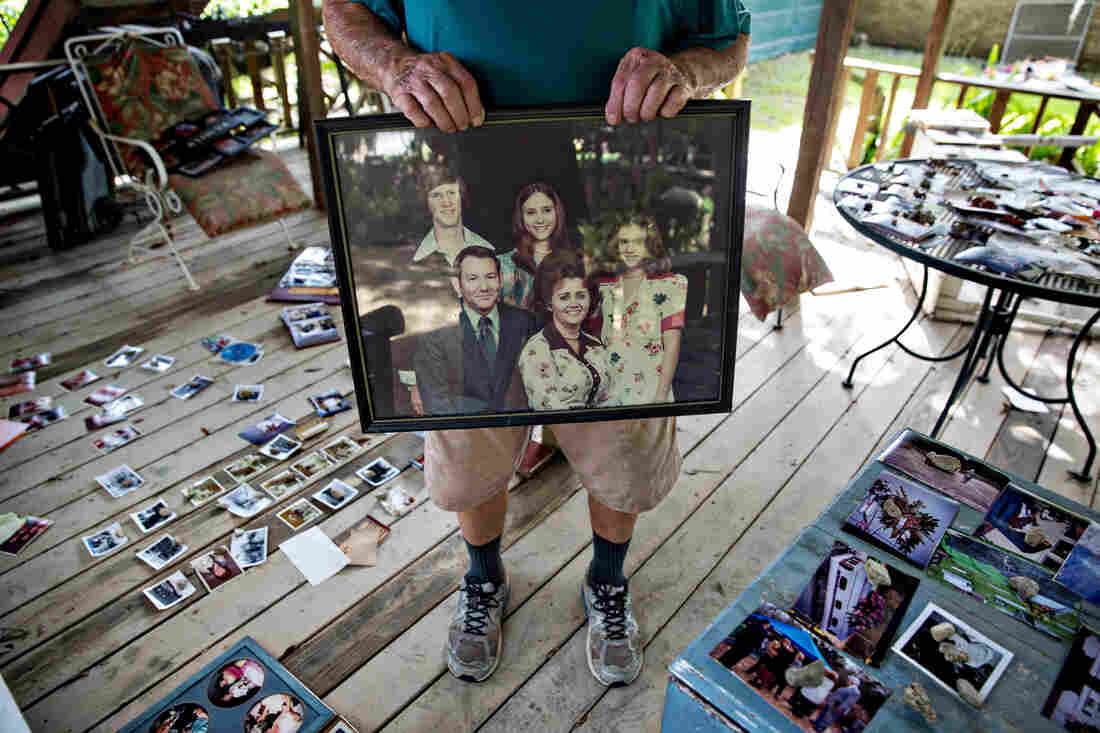 Hilton Pray, 82, holds one of thousands of his photographs that were damaged after an estimated 4-feet of water filled his home in Denham Springs, La. Collin Richie/Humans of the Water hide caption 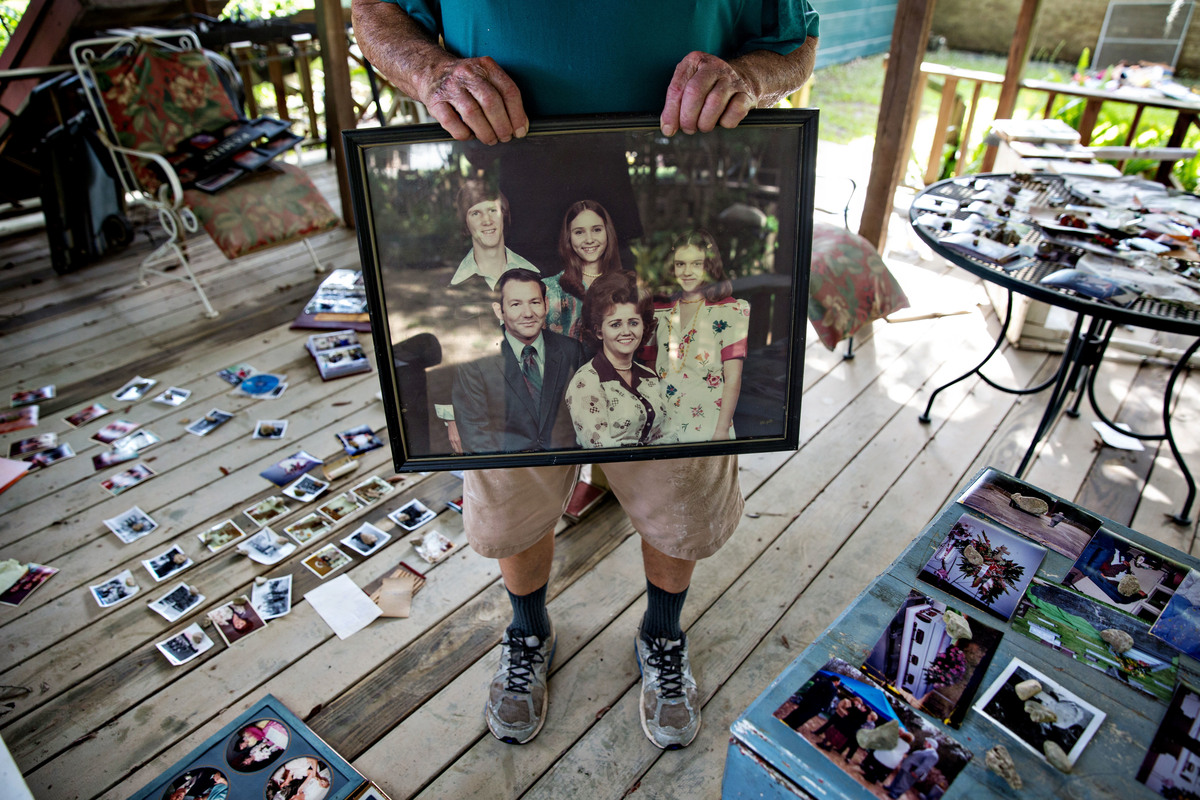 Hilton Pray, 82, holds one of thousands of his photographs that were damaged after an estimated 4-feet of water filled his home in Denham Springs, La.

Collin Richie/Humans of the Water

In Baton Rouge, La., people are using whatever tools they have to help their community recover from the flood.

Four photographers have been creating portraits of those affected. Their project, "Humans of the Water," focuses not on what people lost, but on what they saved.

One of those photographers is Collin Richie. He says documentary photography isn't typically his style. Most of his work involves snapping photos for weddings, magazines and corporate advertisements.

But when a local magazine asked him to photograph someone who was using his boat to rescue neighbors from the flood waters, the story drew him in. He went back to photograph another flood victim, and then he went back again. That's how this project was born.

In one of Richie's images, a man is surrounded by thousands of water-soaked photographs scattered over a deck, on tables and chairs, some are weighed down with stones to dry out.

"He was scared of the wind," Richie says. "He didn't want any of the items to blow into the still-flooded yard and take it any worse. You can see albums, too. They're trying to separate the pages. He had lived in the same home for 72 years. He was 82 years old. And so it was, basically he referenced it as his entire family history." 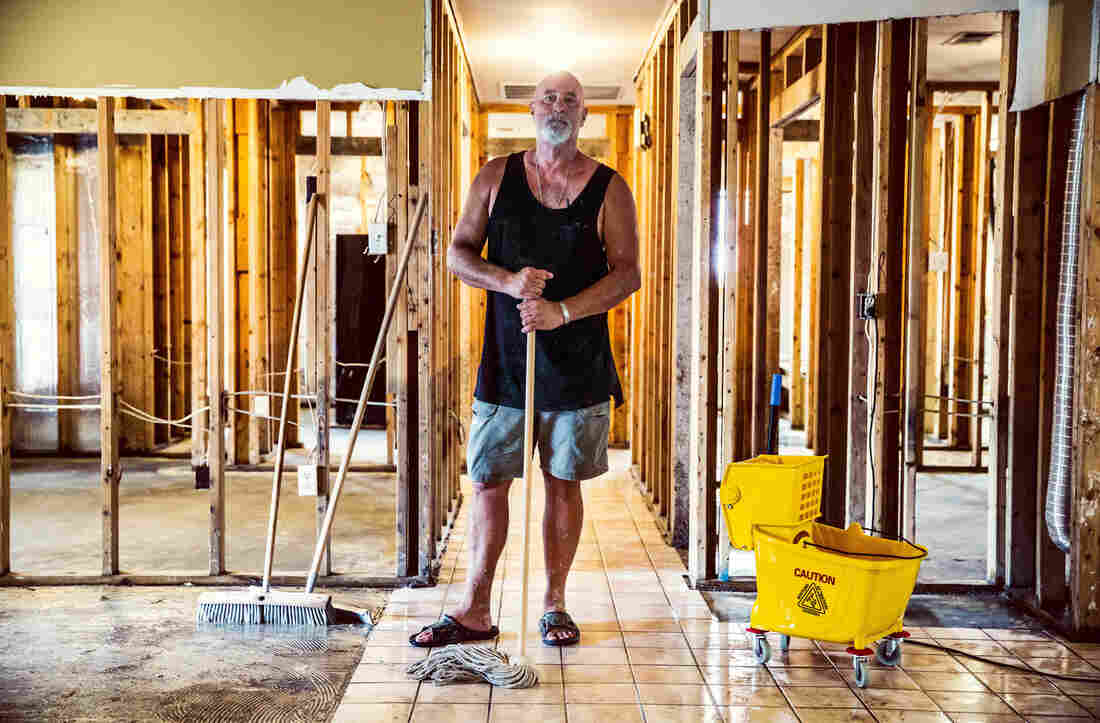 Phillip "Mooney" Brignac, 58, works on cleaning up his home, where he's lived since 1991, raising two children during that time. "We will definitely rebuild. We are St. Amant strong. We will do whatever we've got to do," he said. David Morris/Humans of the Water hide caption

Another photo shows a young man sitting beside an American flag that his roommate brought home after serving in Afghanistan.

"They were both veterans, and it was actually a group of them all live close by, and they were all trying to salvage their Navy medals, their Army medals, their flags, their service flags," Richie says. "Those things were the most important to them." 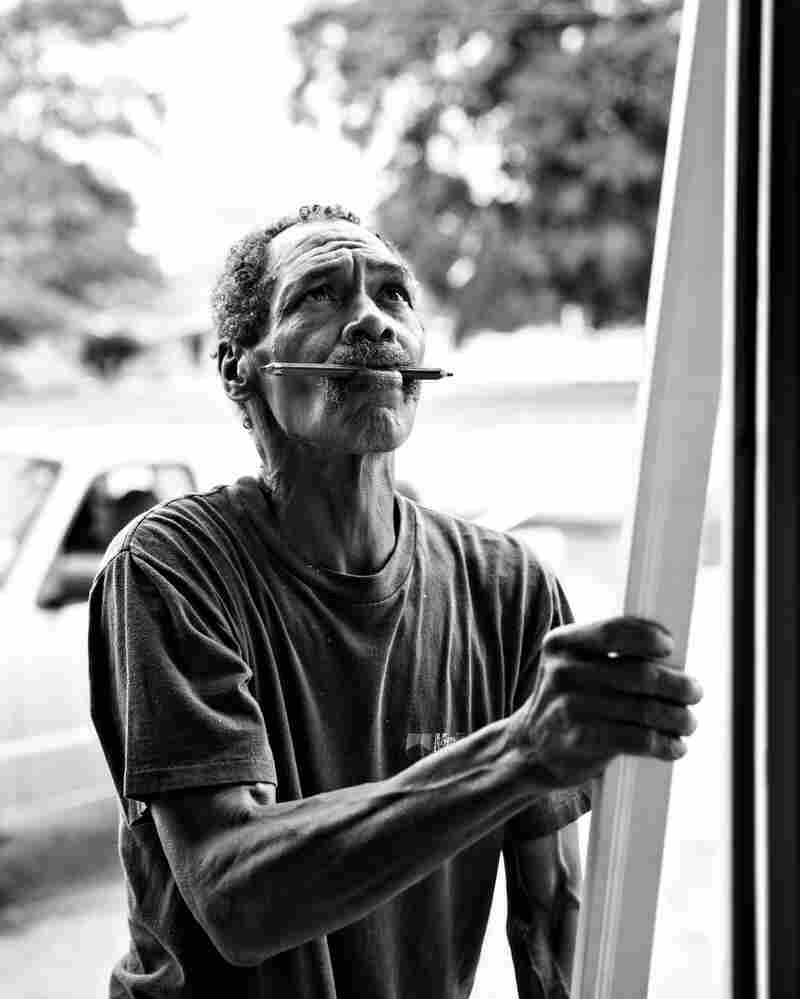 Gil Gauthier, a contractor from New Roads, works on a door frame on a small commercial building off of Plank Road. After a little small talk, he turned around and quietly said "...helluva thing wasn't it?" before going back to hammering. Collin Richie/Humans of the Water hide caption

Richie says what surprised him about working on this project was how humble people were despite all they had lost.

"They ask, 'Why are you taking a picture of me? My neighbor took 7 feet. I took 6 feet,' " he says. "They always related to someone who had it worse. And they don't want the focus to be on them because they know so many of their family and friends are in such a worse spot. They're like, 'Well, I have a place to stay. You need to go photograph these people over here who are still looking.' "

When Richie met people, he would ask them about the one thing they took with them.

"They'd pause, and immediately walk me to the one item," he says. "They knew exactly what was most important."

Many of these photographs capture the role of faith in people's lives. Richie says one of the images that stood out to him was of a man holding a sign that said, "Faith." It was the only item the man recognized that wasn't in complete disarray.

"He took a video of it himself," Richie says. "He wanted to remember that moment. And the video shows him walking into still water in the home, and the faith sign is cock-eyed, and he corrects it. And then the video closes." 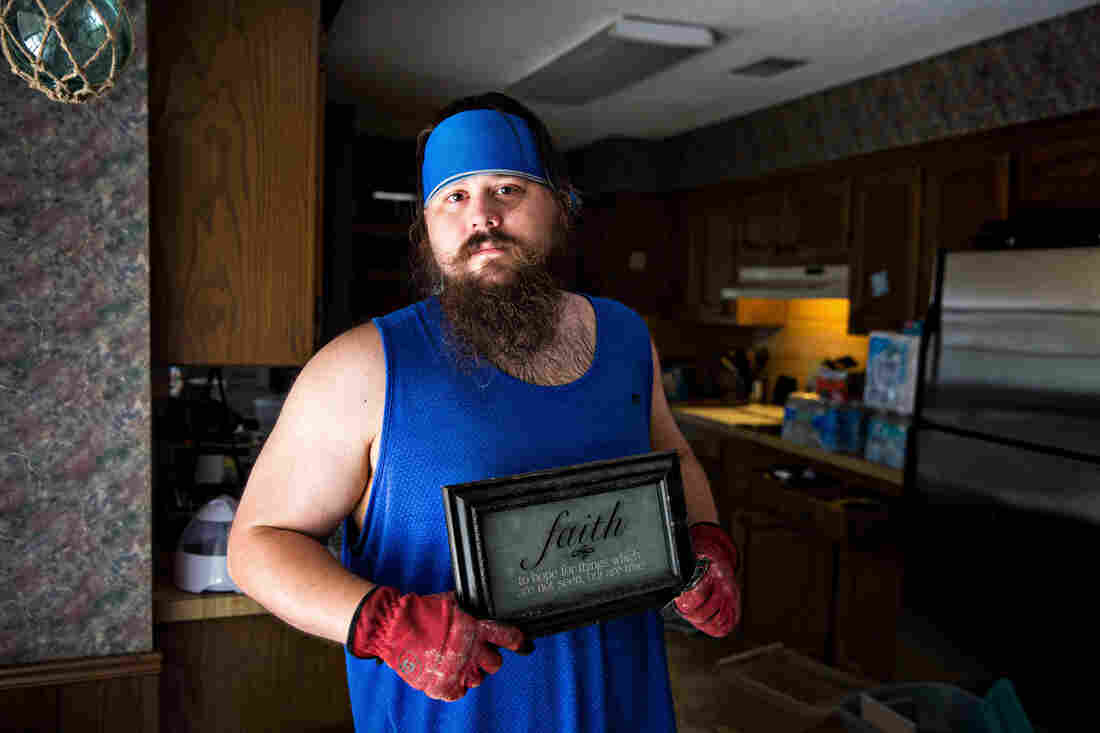 The first thing Adam did when he returned home was straighten the "Faith" sign above his door, creating a sense of normalcy and hope for himself after his home was overwhelmed with water in Denham Springs, La. Collin Richie/Humans of the Water hide caption

Richie's photos not only capture what people were able to save, but also the people who are helping communities rebuild. One of those images shows someone repairing a house.

"You're seeing an influx of contractors from the unflooded areas, and when we approached him, and we started taking his picture I said, 'You don't mind?' And he said, 'You do you're thing, I'll do mine,' " Richie says. "And as we're walking way, he kind of half turned and said, 'Hell of a thing, wasn't it?' And that just was really powerful." 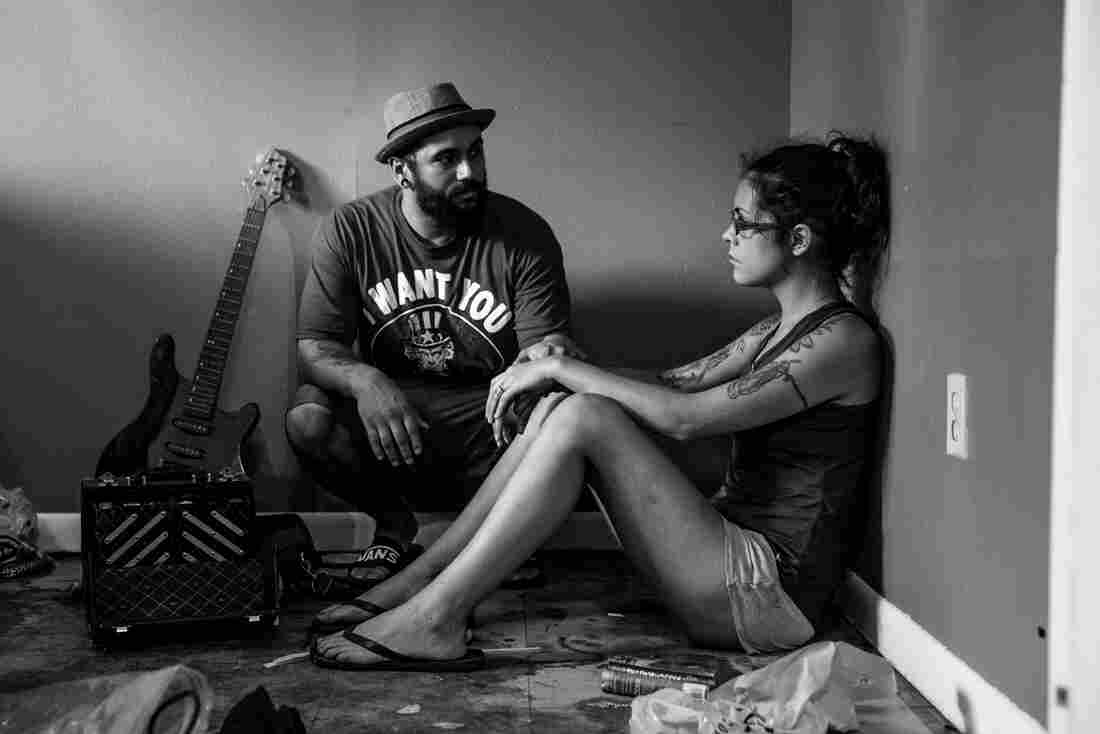 Wade and Audry sit amongst the dirt and debris left by the flood waters. Having just moved to Baton Rouge from San Antonio, Wade said, "When you lose everything, it puts what's important into perspective. When we came here, we wanted to start over....Now it looks like we have to." David Morris/Humans of the Water hide caption

Richie says he hopes this project will inspire photographers elsewhere to do the same when tragedy strikes.

"I think when you're faced with an adversity the size that Louisiana is now, we need everyone to help, and you can help best by doing what you do best," he says. "Everyone has something they're good at, and if we all come together and use our talents, we'll come out of this a lot better."