Accessibility links
'It's Punk Rock To Be Black In America': Afropunk Festival Pushes The Movement Eleven years ago, Matthew Morgan started the festival not only to book people of color, but also to redefine "that [punk] attitude that we've always had." 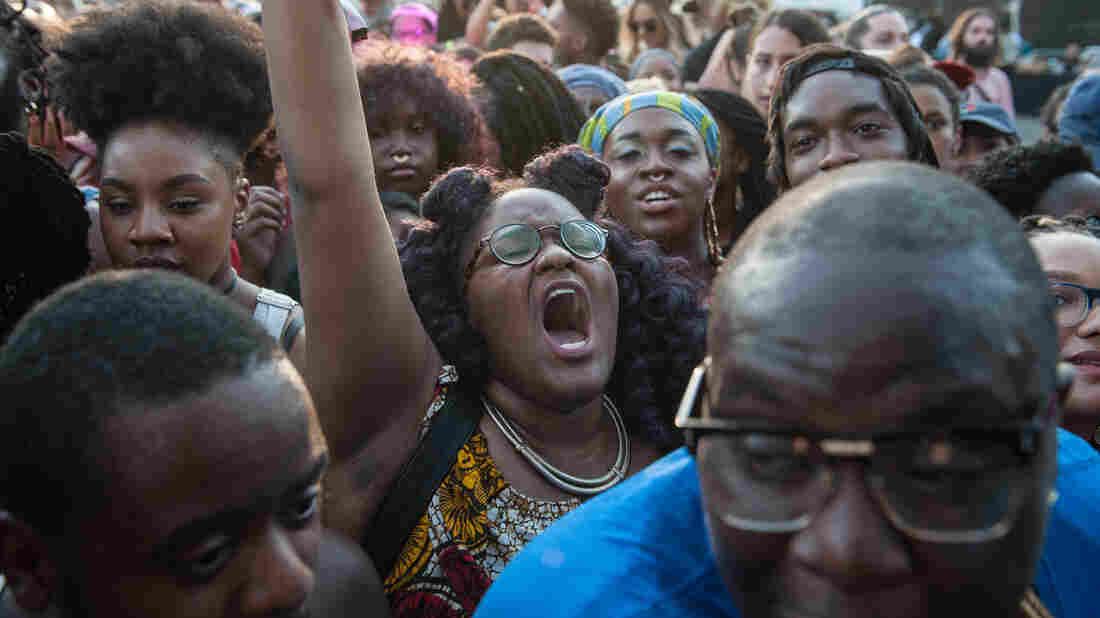 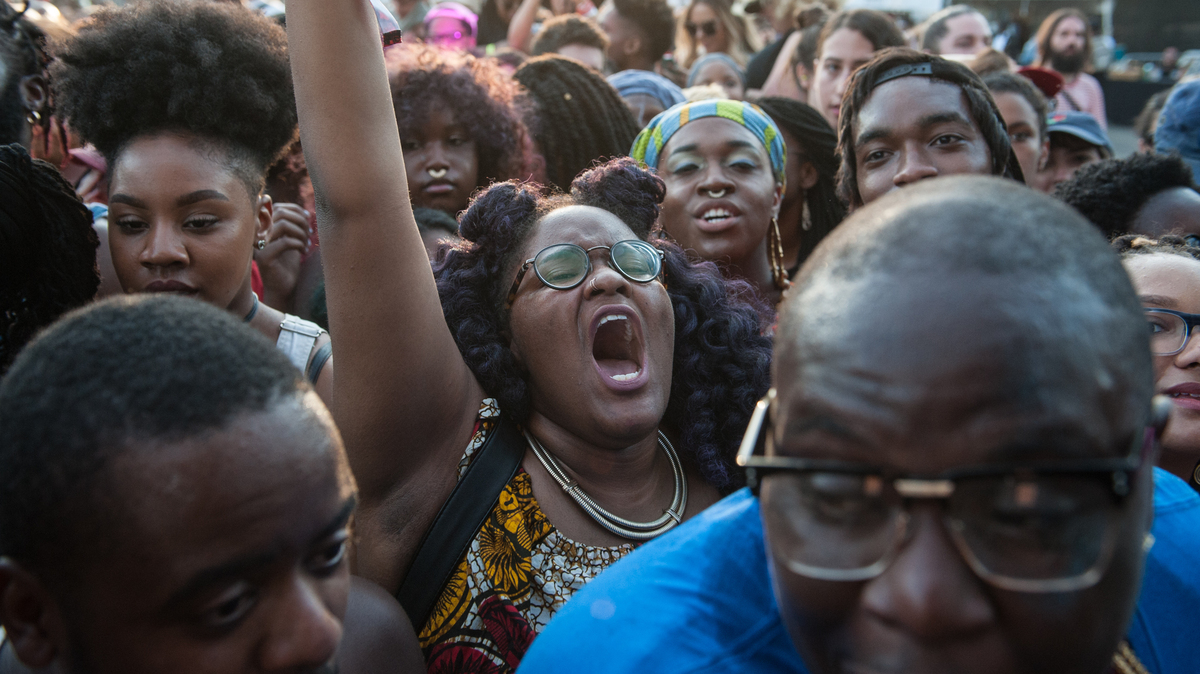 Fans at the Afropunk Festival Brooklyn, now in its 11th year.

When you think about punk music, you might picture some very thin, pale young guys with mohawks. But Brooklyn's Afropunk Festival is out to prove that punk is much more than that.

The young Canadian rocker Sate was one of the up-and-coming acts at Afropunk, which took place Aug. 27 and 28 this year. I met her right before she hit the stage. She was wearing a cut-off Fishbone shirt, and she says the black punk band inspired her.

"I think I was just, like, dumbstruck," Sate says of her first time seeing Fishbone live, "and I just remember there being sweat on the walls and being like, 'That's the kind of show that I want to create, where there's sweat on the walls.'"

AfroPunk Acts To Free Your Mind And Your ... Ears

And with soulful mosh-pit anthems like her song "Warrior," she's achieved that teenage dream.

The music was scorching at Afropunk this year, and so was the weather. Despite that, thousands poured into the Brooklyn festival, which at times looked like a fashion event — colorful hair, exquisite makeup, bombastic outfits and, of course, the music.

The festival's lineup also had its share of mainstream stars. Headlining on Sunday was rapper Ice Cube. And on Saturday, the festival was graced by one of the founding fathers of funk: George Clinton. At age 75, Clinton says he's mellowed out.

"Now, I've been getting ready to leave the planet," he says. "It's hard to be hardcore, so you got to be careful that you don't hurt yourself trying to be hardcore."

"Are you still hardcore?" I ask.

He reminisced about hearing punk for the first time, right around when Motown was big.

"Here come these groups from England, wearing jeans with holes in them, patches on them saying, 'F*** and peace and love.' And it became the new hype, so we realized, 'Oh, you just have to be able to let go whatever you think is cool and flip it.'"

It's that same spirit that attracted Matthew Morgan back when he was growing up in London. He says he came into punk music like a lot of kids: through a rebellious sibling.

"So I grew up in a very Jewish West Indian neighborhood," Morgan says. "And in the '70s, there was a lot of angst with the second-generation West Indian kids that were not like their parents and started pushing back against the police and the government. And they were my punk-rock idols. It was, like, my brother and his friends that were just saying no."

But as Morgan started working in the music industry, he found people were saying no to him. He saw people of color embraced as artists, but shut out of business decisions.

"The music business is a funny thing because it has a perception of this very liberal, equal business, but it's actually quite rare for people of color to be in those positions that book acts," Morgan says.

He had a really hard time getting gigs for the artists of color he represented, so 11 years ago, he started the Afropunk Festival, which he now runs with his partner, Jocelyn Cooper. Performing at that very first event was Saul Williams, a spoken word artist. Under the cool shade of a tree, I sat down with Williams and asked him how he defines punk. He says it's about rebellion.

Williams says back when he started, punk offered him a chance to embrace his weirdness, to be quirky — something he says black men in America often don't get to do.

"That punk spirit to me signifies the reality of the need to, like, stand up and face the nonsense creatively and to be unafraid, to challenge it, to face the challenge," Williams says.

As the festival grows in audience and adds more mainstream acts, I asked organizer Matthew Morgan why punk is important to African-Americans.

"I look at Sun Ra and Miles Davis and Grace Jones and Bootsy Collins, and they're punk rock to me," Morgan says. "You know, Malcolm X is punk rock to me — redefining that attitude that we've always had. It's punk rock to be black in America."