Accessibility links
At MTV's Video Music Awards, It's All About 'Moments' This year's VMAs featured Rihanna, Beyonce, Britney Spears, and several minutes of Kanye West doing whatever he wants — all vying for social-media dominance in the hours, days and weeks ahead. 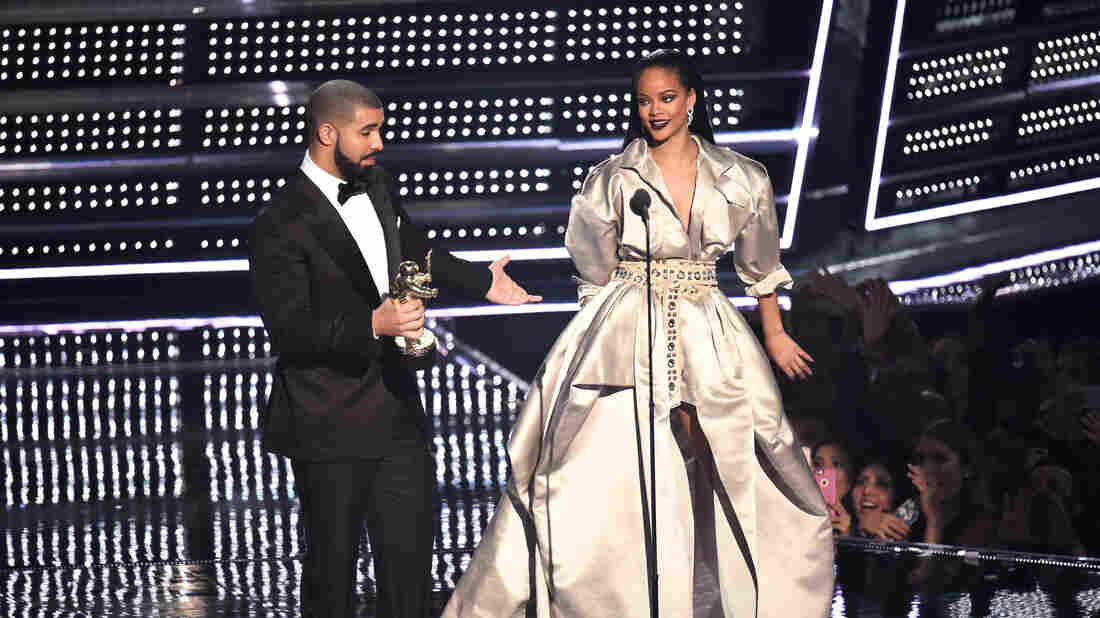 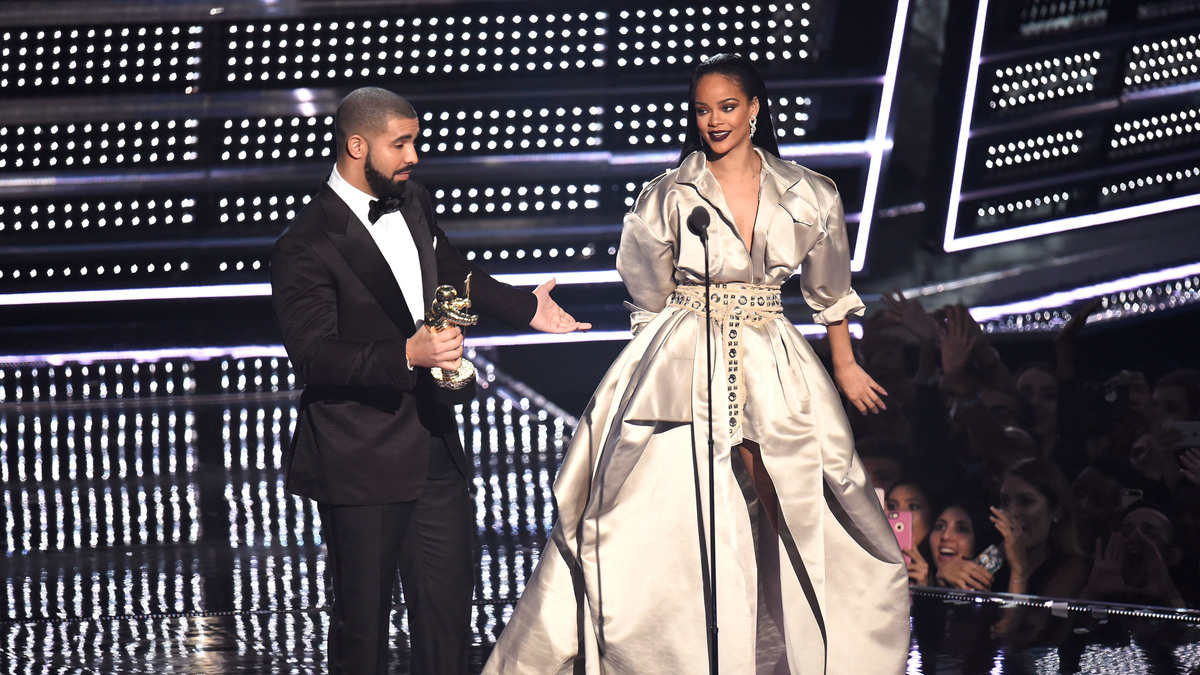 Drake presents Rihanna with the the Video Vanguard Award during the 2016 MTV Video Music Awards.

Since 1984, MTV has given out awards to honor achievements in the world of music videos. But the Video Music Awards have long been about moments as much as trophies: Madonna kissing Britney Spears in 2003, Kanye West busting into Taylor Swift's speech (which gave the world "I'ma let you finish") in 2009, the culmination of a Nicki Minaj-Miley Cyrus feud (which gave the world "Miley, what's good?") last year. It's a long tradition — as far back as the mid-'80s, Madonna was using the VMAs to cultivate controversy — but since the rise of social media, this particular awards show has played the hashtag game brilliantly.

For MTV, the VMAs are a high-wire act of painstakingly choreographed performances and deliberately unscripted opportunities to let unpredictable stars air their ids and grievances on live television. This year, the beefs were kept to a minimum, but MTV did give West four minutes to essentially do whatever he wanted — following last year's famous onstage ramble, in which the star claimed to be running for president in 2020. This time around, he mixed social commentary with seemingly free-associated conversation and callouts, before introducing the world premiere of his new video for "Fade."

On Monday morning, Linda Holmes and I will post a discussion of this year's VMAs in a special Small Batch edition of Pop Culture Happy Hour. (It'll appear on this page, but you can also subscribe to the podcast feed here.) In the meantime, major VMA Moments have belonged to the likes of Beyonce (nominated for 11 awards, for an assortment of videos from this year's Lemonade), Rihanna (the winner of this year's Video Vanguard Award, she performed four times throughout the night), Britney Spears (making her return to the VMAs to coincide with the release of Glory), Ariana Grande (in a high-profile duet with Nicki Minaj), Olympians as presenters, and much more. Oh, and Kanye West didn't merely speak: He was also up for Video Of The Year against Adele, Beyonce, Drake and Justin Bieber.

UPDATE #1 (9:50 p.m. ET): A grand total of two awards have been doled out onscreen, for Best Hip-Hop Video (Drake's "Hotline Bling") and Best Male Video (Calvin Harris' "This Is What You Came For [feat. Rihanna]").

UPDATE #5 (11:40 p.m. ET): Beyonce's "Formation" wins Video Of The Year. Which should just about do it for the night's festivities, once Rihanna performs for the fourth time this evening.

UPDATE #6 (11:50 p.m. ET): But wait! Drake had been "stuck in traffic" and thus unable to accept his award for Best Hip-Hop Video, but he arrived in time to present Rihanna with her Video Vanguard Award.

An early version of this article misidentified the singer of DNCE. It is Joe Jonas, not his brother Nick.