Accessibility links
For Some Donald Trump Loyalists, It's Personality Over Policy At the opening of a new Trump campaign office in Nevada, Donald Trump's supporters say they'll vote for him regardless of whether they agree with everything he says. 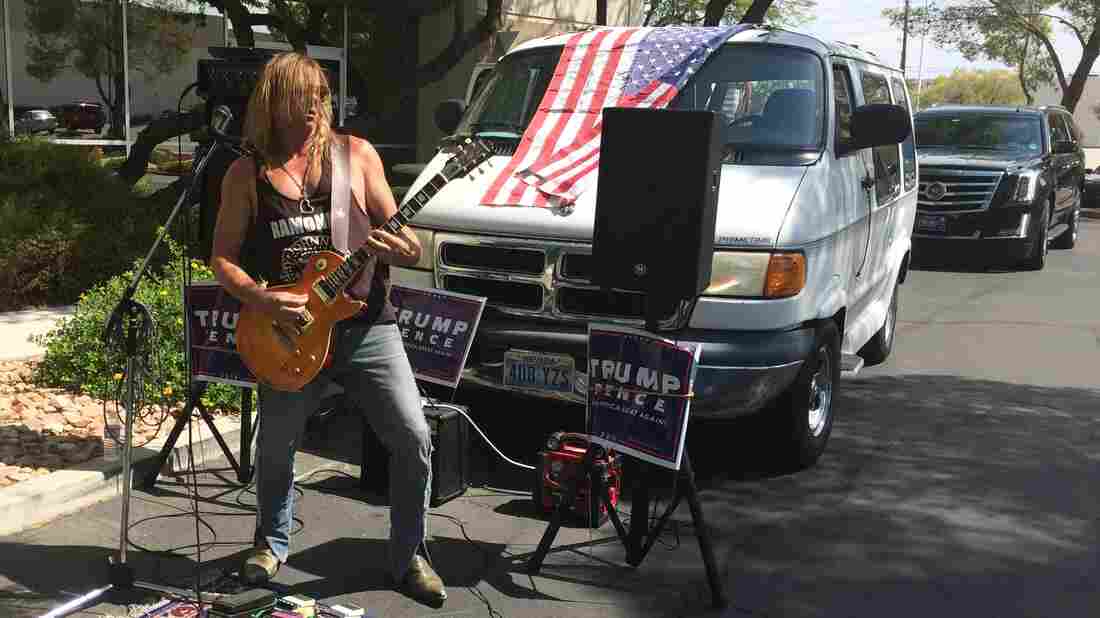 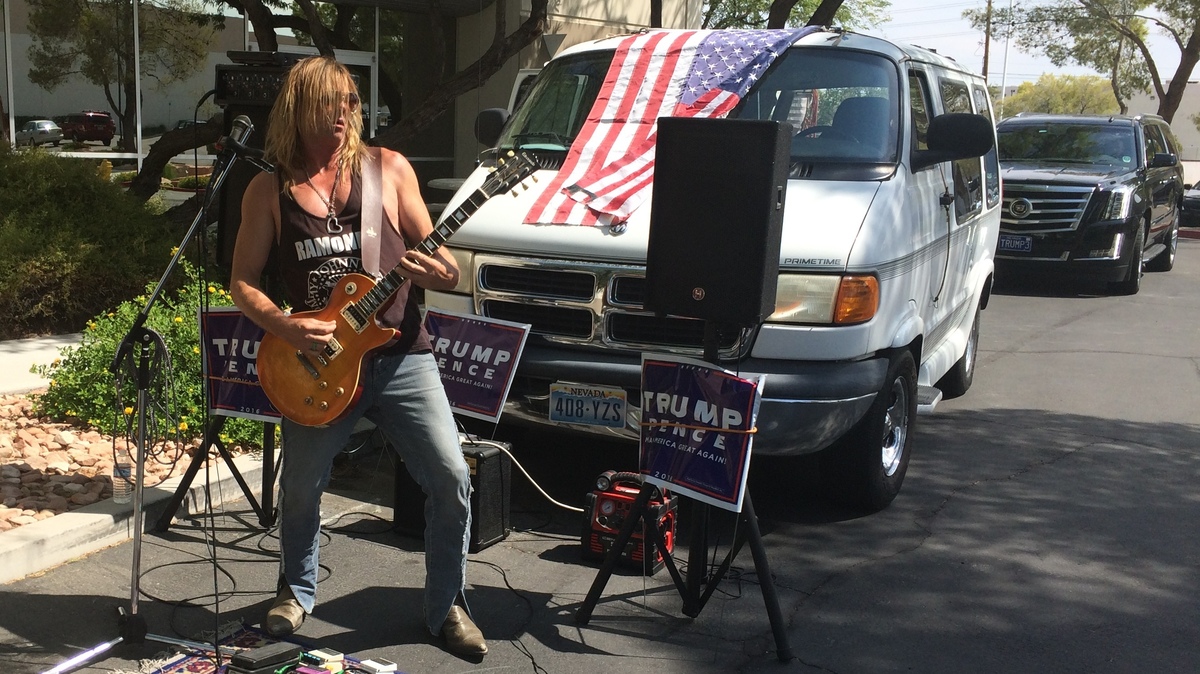 Steven Boz performs outside of a Trump campaign office. He says he loves Trump's "attitude."

Immigration has been a galvanizing issue in Donald Trump's campaign from the beginning. But in recent days, the Republican nominee has been adjusting his position — first suggesting he'd be willing to "soften" calls to deport people in the country illegally, then returning to a more hard-line stance after criticism from prominent conservatives.

But many of Trump's staunchest supporters seem unconcerned about his apparent policy shifts.

Over the weekend, Trump supporters streamed in and out of a new campaign office opening in the battleground state of Nevada, collecting yard signs and bumper stickers. Outside, Las Vegas-based musician Steven Boz performed a ballad to the real estate developer.

Boz has flowing blond hair, and wears sunglasses as he performs. Outside the Las Vegas office park, he set up a makeshift stage on an Oriental rug in front of his white tour van. He said he loves Trump's "attitude."

"I can relate to it," he says. "It's like, say what's real and get on with it. And stop pussyfootin' around, people."

Boz says illegal immigration is a problem, but when it comes to policy, he trusts Trump to figure that out. "Whatever he wants to do, I'll back him. That's all I can say. It's tough," Boz says.

Inside, Judy Callahan, 69, says she's preparing to retire from her job as a hospice cook — and devote her free time to volunteering for the Trump campaign. Wearing a red "Make America Great Again" hat, Callahan says she has supported the real estate developer from the beginning.

"I just love him — I love every second of him," she says.

Callahan says she opposes amnesty and wants Trump to be "strong" on immigration, but it doesn't bother her that his policy positions can sometimes seem unclear. 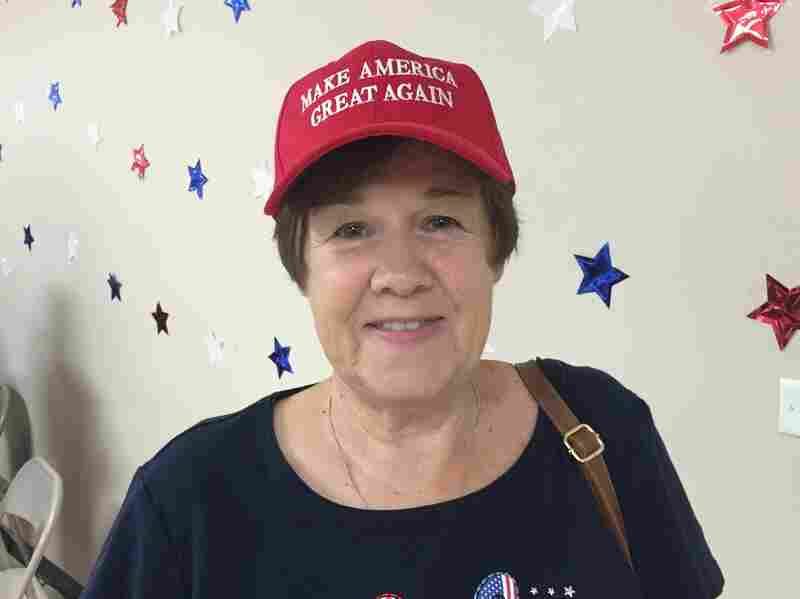 Judy Callahan says she supports Trump but listens "to half of what Trump says." Sarah McCammon/NPR hide caption 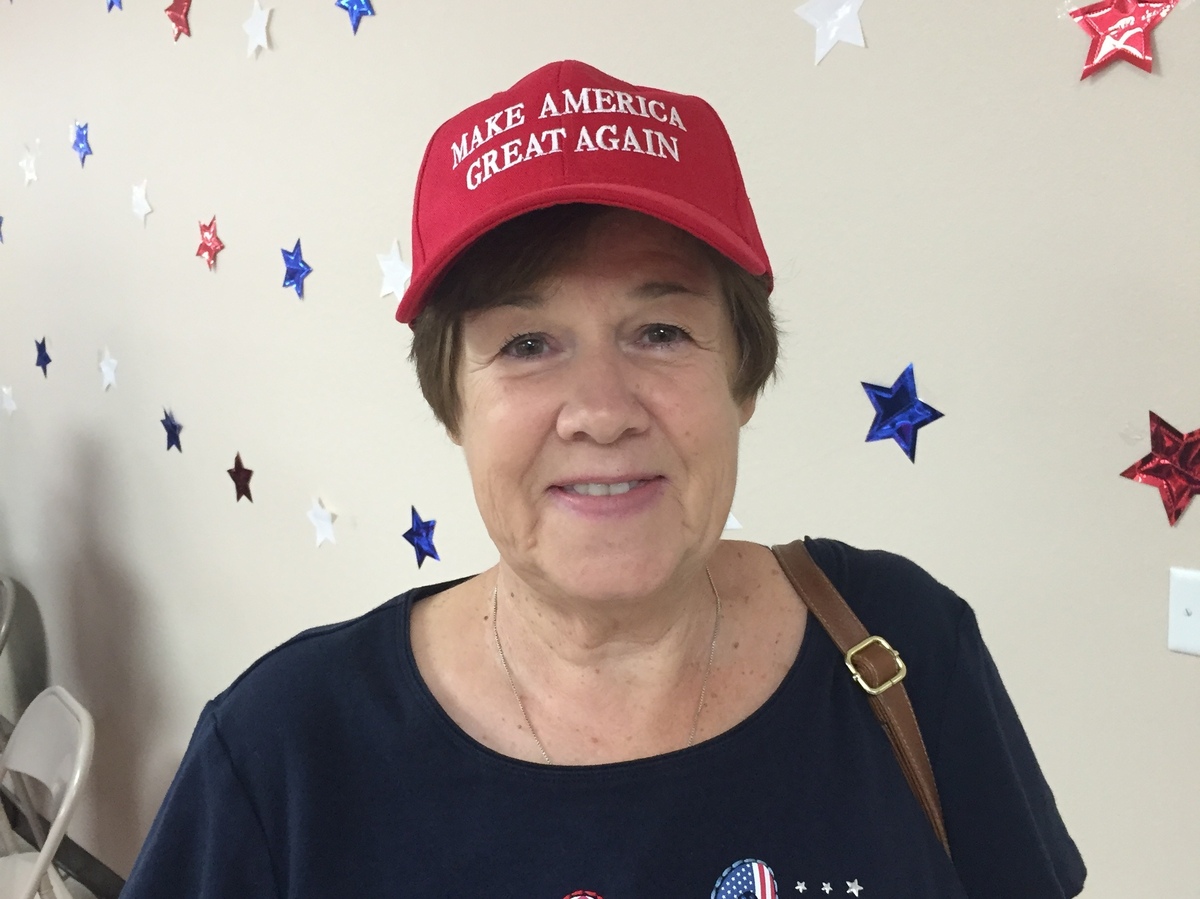 Judy Callahan says she supports Trump but listens "to half of what Trump says."

"I listen to half of what Trump says," Callahan explains. "And then I move on because you have to get people's attention."

Callahan says that strategy worked to help him knock out his Republican primary opponents, but she thinks he will develop more specific policies if he's elected.

"And not everything Trump says is true — I mean, it's not true like it's in concrete," Callahan says. "He said he would stop the border flow, he would build some kind of wall, and he would work on the people that are here. That's all there is; the rest of it's kind of fluff." 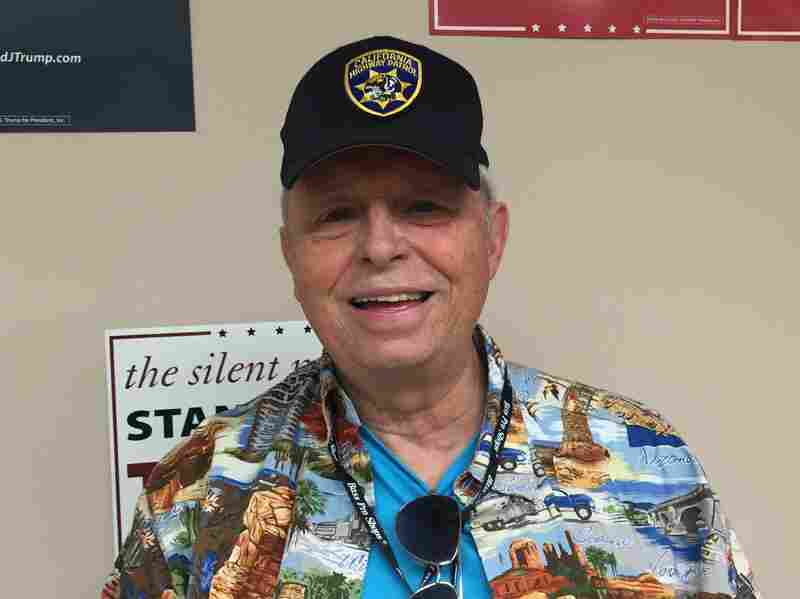 Monty Kiefer, 75, says Trump's ideas are part of a "negotiation," rather than a firm policy proposal. Sarah McCammon/NPR hide caption 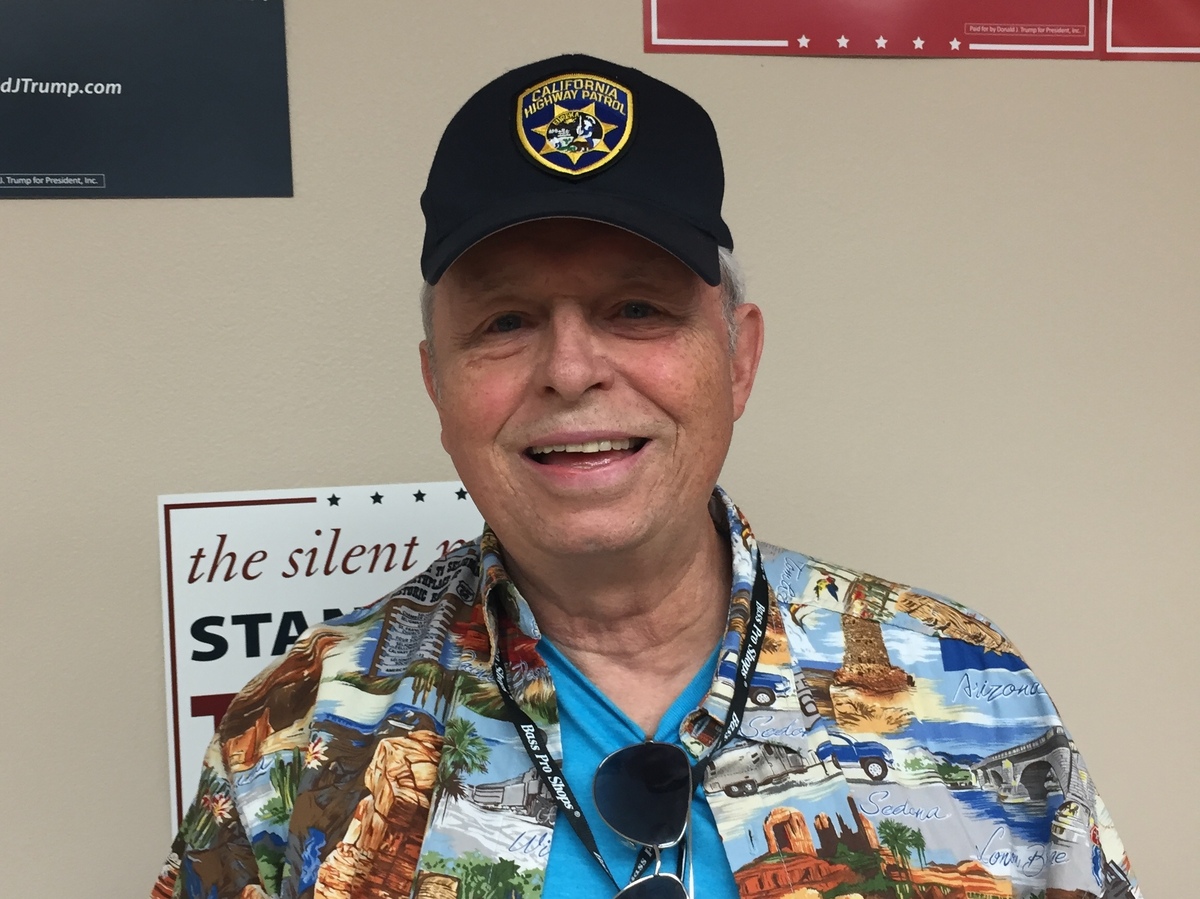 Monty Kiefer, 75, says Trump's ideas are part of a "negotiation," rather than a firm policy proposal.

"He's a negotiator. He takes a position to start a negotiation," Kiefer says.

He says Trump has been consistent about what he sees as the most important thing — getting rid of what he calls the "bad" people.

Last week, Trump told Fox News he could "work with" people who are in the country illegally and have not committed crimes. That sounded much like a path to legalization — an idea Trump had previously criticized as "weak" when proposed by his GOP primary rivals.

"That's a negotiating point," Kiefer says. "Remember, he wrote the book The Art of the Deal." 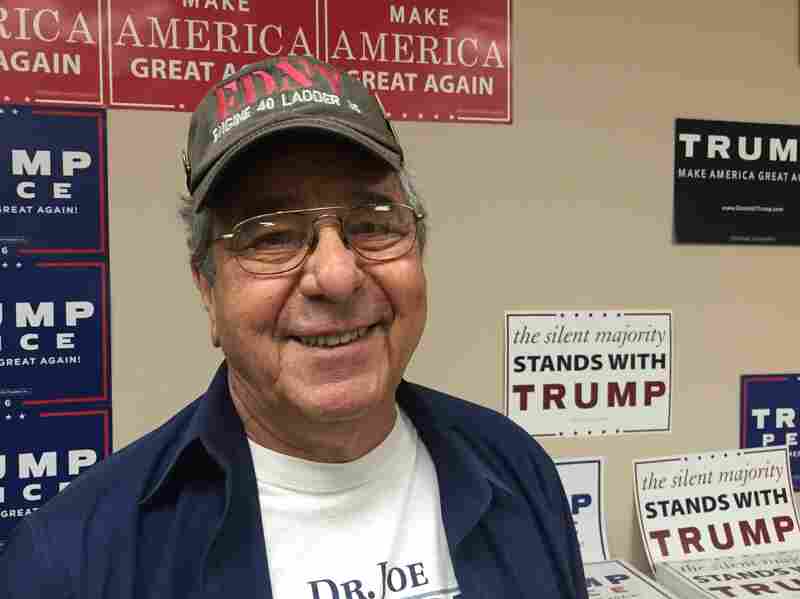 John Delaberta is a retired businessman. He supports building a wall on the U.S.-Mexico border. Sarah McCammon/NPR hide caption 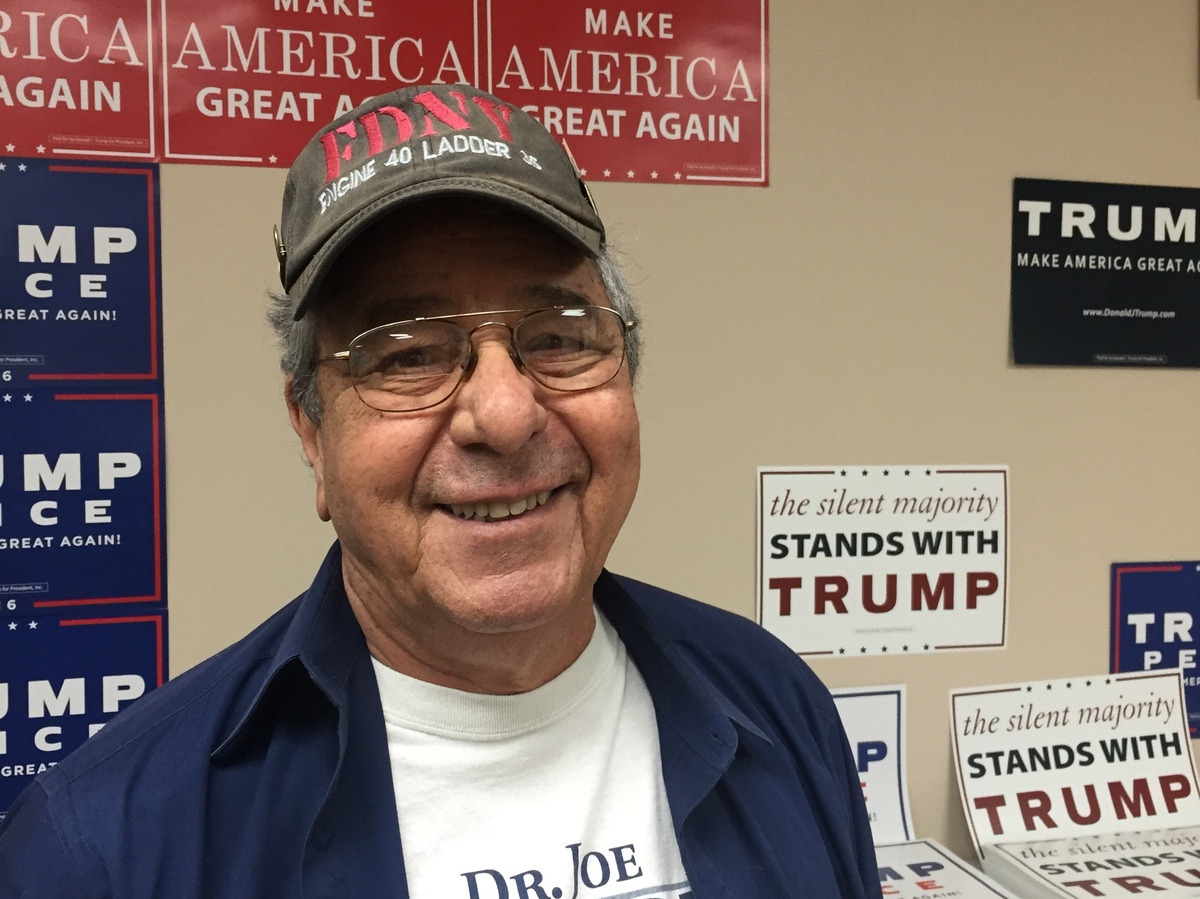 John Delaberta is a retired businessman. He supports building a wall on the U.S.-Mexico border.

For John Delaberta, a retired businessman who also came to sign up to volunteer, what to do about immigration isn't complicated.

"I'm a little older than you," he tells me. "And I have a lot more common sense that I was taught as a young child growing up in America. And common sense and practical solutions seem to work most of the time."

One solution, Delaberta says, is to build a wall along the U.S.-Mexico border.

This weekend in Iowa, Trump returned to a hard-line position, telling supporters that on "day one" he'd use existing laws to deport what he called "hundreds and thousands" of criminals who are in the country illegally.

But deporting large numbers of people could be a tough sell to general election voters, and Trump has yet to outline exactly how he'd go about it, but he tweeted Sunday that he'll make "a major speech on illegal immigration on Wednesday" in Arizona.

I will be making a major speech on ILLEGAL IMMIGRATION on Wednesday in the GREAT State of Arizona. Big crowds, looking for a larger venue.

"Obviously people are telling him that he has to come more to the middle to not offend young white women like you, who are college-educated and just think he's an evil man," Delaberta says.

Trump and his campaign have promised a more detailed policy speech on immigration in the coming days. Still, for the candidate who once told a crowd in Iowa he could "shoot somebody" and not lose voters, the details may not matter.

"He could shoot someone on Broadway and I would still vote for him," says Judy Callahan.

Pressed on whether she meant that literally, Callahan laughs.

"Well, only if he just, if he just wounded them. We'll just let him wound 'em," Callahan jokes. "No, what I'm trying to say to you is, the people who are here today, they're going to vote for Trump."