Accessibility links
Surfers And Scientists Team Up To Create The 'Perfect Wave' Surfers once deemed man-made waves weak and mushy compared to the best that break along the coast. Then engineers and an 11-time world champion surfer showed just how good an artificial wave can be.

Forget Hawaii or Fiji. The spot that's really got surfers talking these days is a secluded pond more than 100 miles from the ocean, in California's Central Valley.

"It's just an amazing, amazing wave," says Robert "Wingnut" Weaver, a longboarder from Santa Cruz, Calif., and one of just a handful of surfers who have ridden the wave. "It's mind-blowing."

But it's not natural. A machine generates these breakers in an experimental wave pool south of Fresno, in Lemoore, Calif. And, unlike natural waves, this one has an owner: the Kelly Slater Wave Co., which plans to market its wave-making technology around the world.

Slater is an 11-time world champion. In December 2015, he electrified the surfing world by releasing a video titled "Kelly's Wave." It shows him carving turns and riding in the tube of a flawless, head-high wave that lasts for more than 40 seconds.

Surfing publications immediately declared the wave a game-changer — one that could bring high-performance surfing to landlocked areas and allow surfing contests to be held in stadiums.

Artificial waves designed for surfers have been available in U.S. surf parks and resort pools since the 1960s. But most haven't been very impressive. They tend to lack the size and power of natural waves, and they don't create a hollow "barrel" that lets surfers ride completely inside the curl.

Slater's wave is different. "It's just like a normal wave," Weaver says. "You get that lift, that drop." 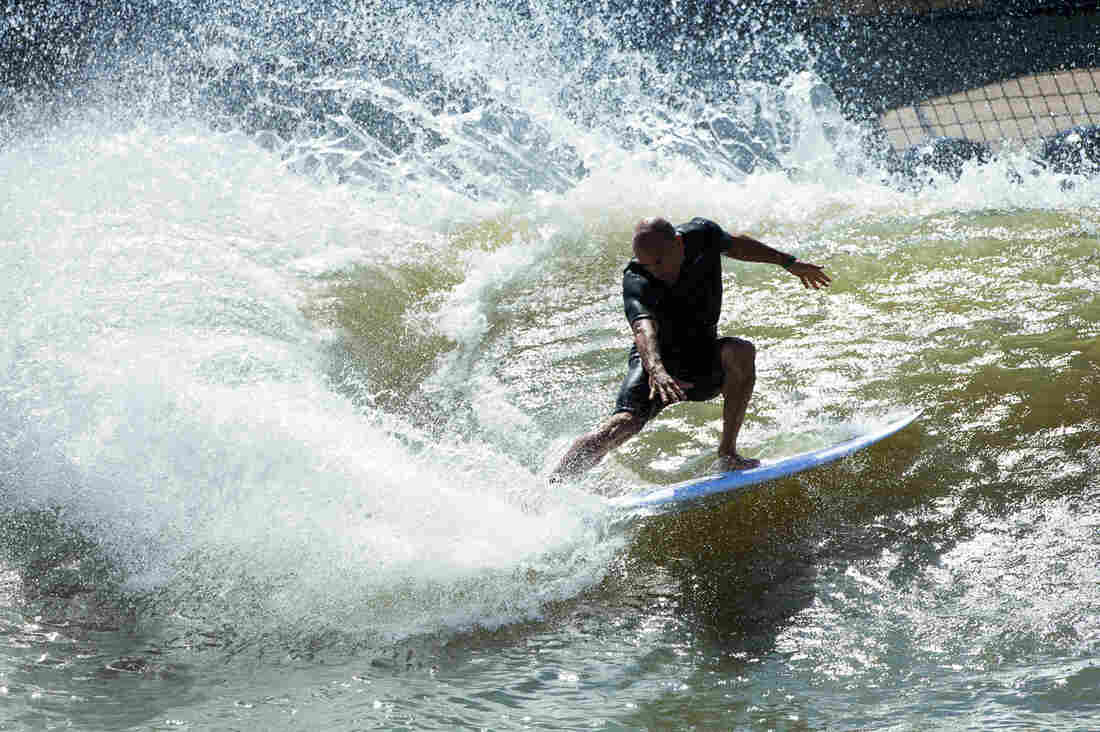 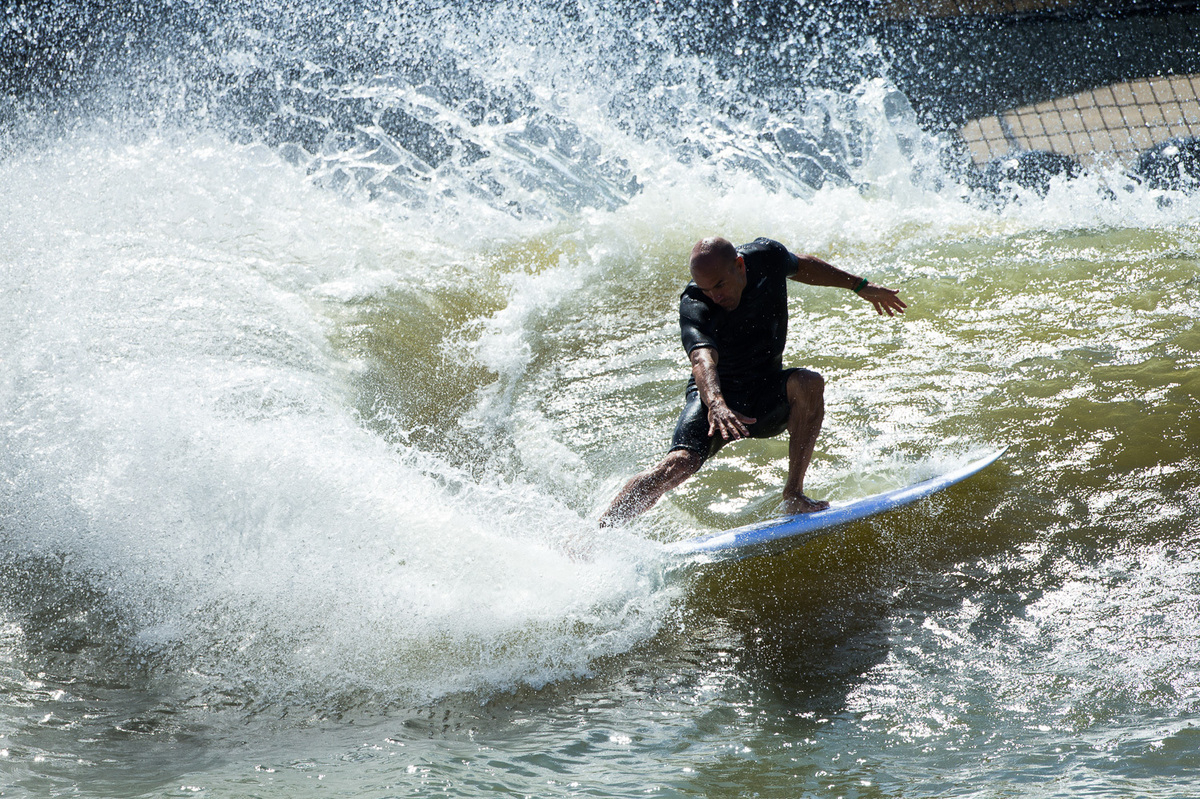 Surfers say the artificial wave at Kelly Slater Wave Co.'s pond has a natural feel. But the technology that creates it requires a several-minutes-long wait between swells.

The wave is created by pulling a wing-shaped device through the water, according to Slater.

"It's a freak of technology," he says in his video. But neither Slater nor the scientists who worked on the wave have been willing to discuss details of the system, which is patented.

Other pioneers in the design of artificial waves were happy to talk about the science of how they do it.

In a miniature surf pool near San Diego, an air-powered system cranks out tiny but perfect waves every 10 seconds.

"We're trying to carve water here," explains Justin Enjo, an engineer at Wave Loch and its sister company, Surf Loch. "We're trying to make water exist in the shape of a ramp."

That means first creating waves in deeper water, then providing a reef, or carefully contoured shoreline, that causes these swells to break in just the right way.

"As they hit the reef they transform, and they get that really hollow section," Enjo explains. "In the science realm, they call them 'plunging breakers.' In surfing vernacular it's referred to 'the tube' or 'the barrel.' "

Surf Loch has yet to build a full-scale surfing wave with this technology. But the firm's founder, Tom Lochtefeld, has created hundreds of less sophisticated artificial waves for clients around the world. 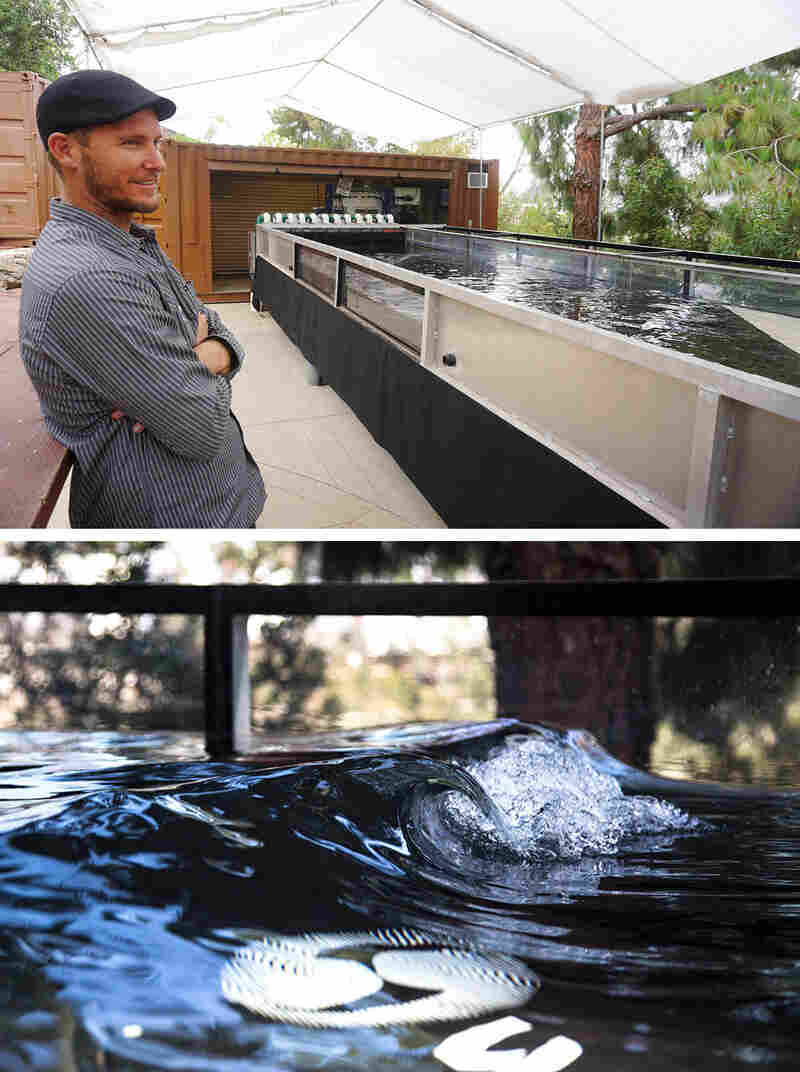 Justin Enjo, an engineer at Wave Loch, "carves water" with a ramp in his experimental wave-making pool near San Diego. So far, the system is able to create tiny, "perfect" surfing waves every 10 seconds. Jon Hamilton/NPR; Courtesy of Wave Loch hide caption 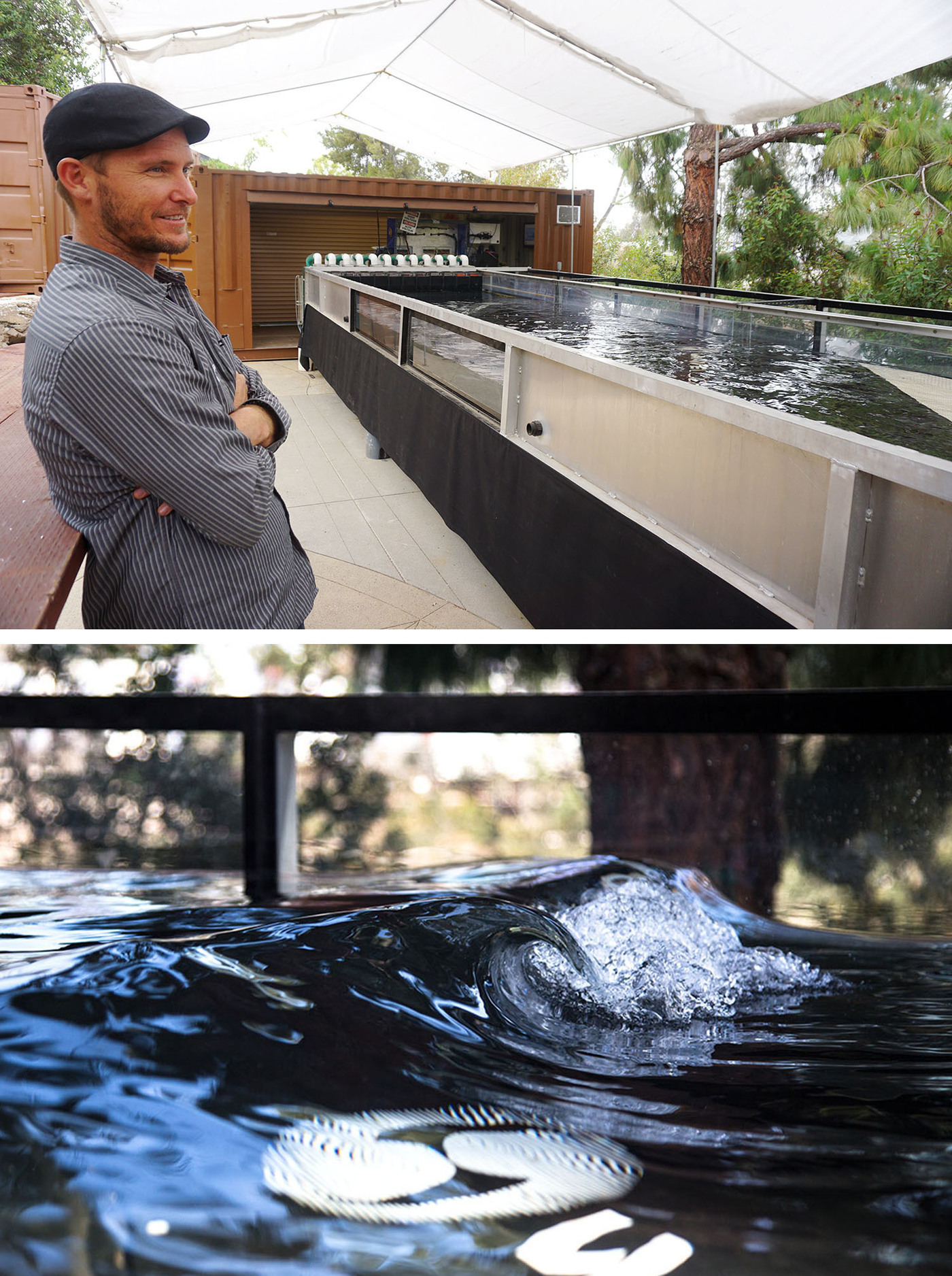 Justin Enjo, an engineer at Wave Loch, "carves water" with a ramp in his experimental wave-making pool near San Diego. So far, the system is able to create tiny, "perfect" surfing waves every 10 seconds.

One such customer was a sheik in Abu Dhabi, Lochtefeld says. "The wave itself was mammoth — I mean it was a double, breaking left and right."

Even so, Lochtefeld admits, it didn't look or feel like a natural wave, because it's really hard to replicate an ocean swell in a small space.

For one thing, it takes a tremendous amount of energy. In the ocean, that energy comes from winds that may build water into a wave over 1,000 miles — long before it reaches shore.

With artificial waves, "you don't have 1,000 miles," Lochtefeld says, "So you've got to compress that to the smallest possible footprint. That takes a lot of science," he says — research capability that was out of reach just a few years ago.

Now, though, supercomputers allow Lochtefeld to predict precisely how a wave will interact with the underwater contours of a surf pool.

One of the continuing challenges with artificial breakers is to provide a high quality wave every few seconds, Lochtefeld says.

Wave pools like Kelly Slater's that rely on a wing pulled through the water typically require surfers to wait several minutes between waves. But fewer waves mean less money for the operator.

"It's difficult to get the quality of wave a surfer would like and make it commercial," Lochtefeld says.

So he is focusing on a wave-generating device that uses a row of air chambers controlled by a computer. That allows him to produce a wave every eight to 10 seconds, he says.

But it also means his wave pool design has to incorporate a system to dissipate the energy from each wave. That's crucial to prevent sloshing water from distorting the shape of subsequent breakers.

Both Lochtefeld and the Kelly Slater Wave Co. are hoping to see their systems used in surfing competitions. In May, the parent company of the World Surf League, which runs surfing competitions, agreed to acquire a majority stake in Slater's company. The World Surf League is also offering two "golden tickets" that will allow a couple of lucky surfers to try Slater's artificial wave.

Artificial waves would make it easier to schedule contests, and they would ensure that each competitor faces an identical wave.

"You'll get to who can do the best turn, the highest air, because you'll have such a level playing field," Weaver says.

For the moment, at least, the International Olympic Committee seems to agree.

The committee has added surfing to the 2020 Olympics in Japan, but the event will take place in the ocean — not in a wave pool.

Science reporters at NPR have been exploring all sorts of waves this summer — from gravitational to seismic and more. You can find all our favorites here.