Accessibility links
In This 2005 Interview, Gene Wilder Explains How He Learned To Get Laughs When he was 8, Wilder's mother had a heart attack, and he took it upon himself to cheer her up. We'll listen back to a Fresh Air interview with the comic actor, who died Monday at age 83. 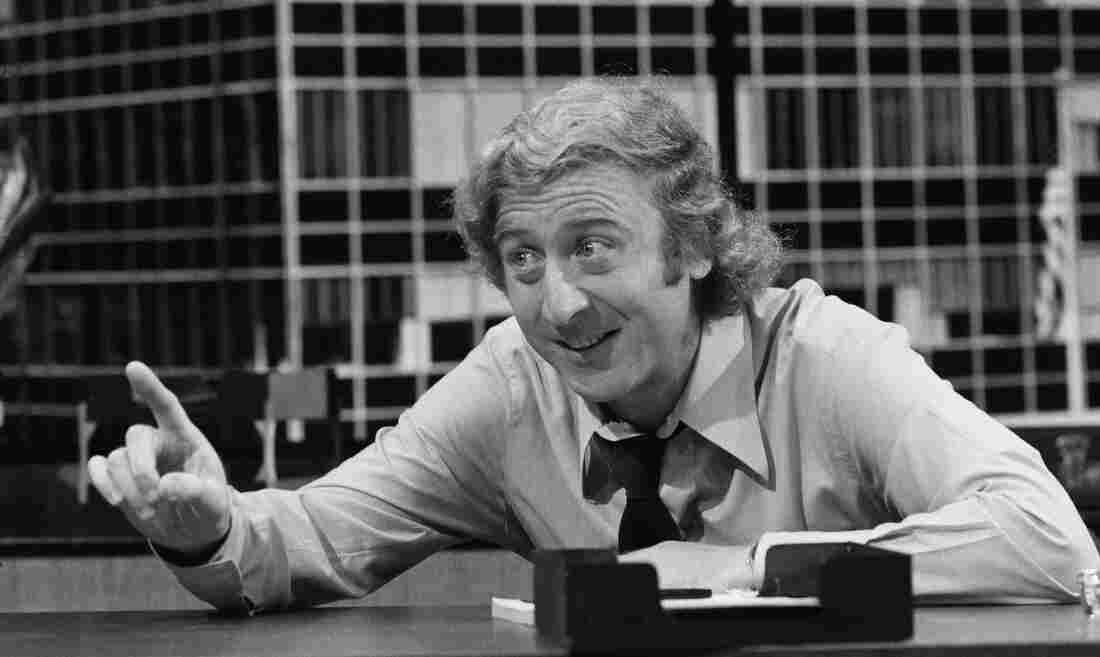 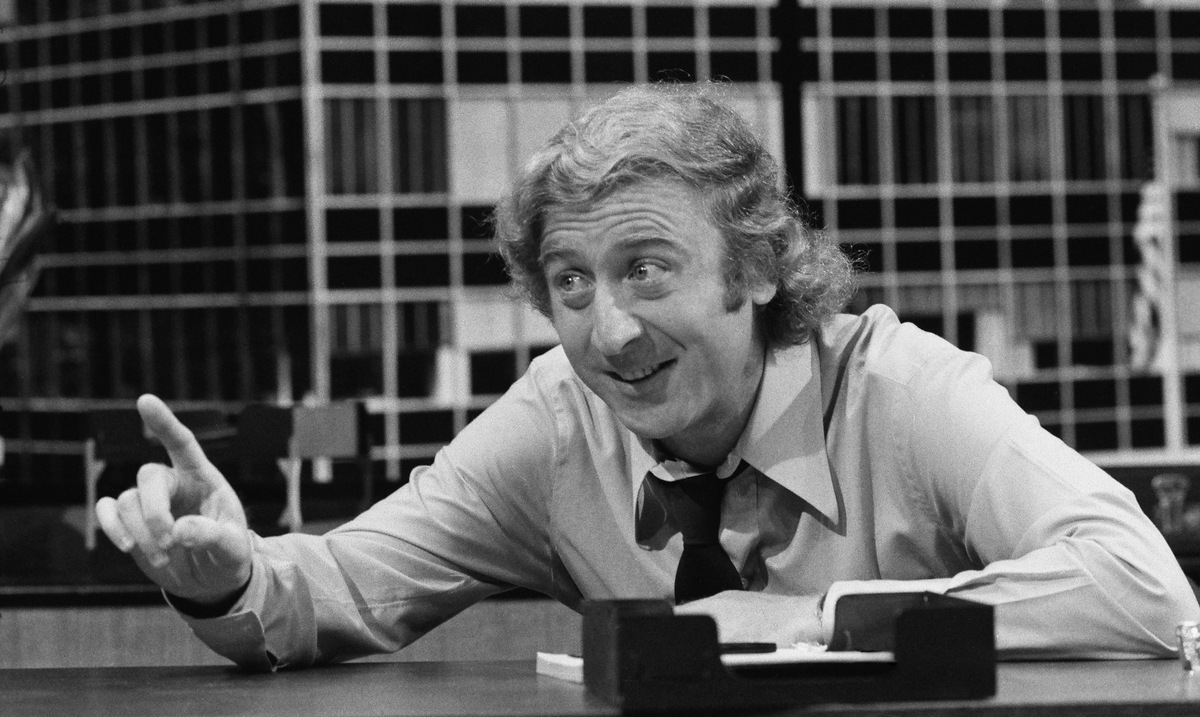 Actor Gene Wilder, who entertained audiences with his performances in Willy Wonka & The Chocolate Factory, The Producers and Blazing Saddles, died Monday. He was 83 years old.

When Gene Wilder was 8 years old, his mother had a heart attack — and he took it upon himself to try to cheer her up. "It was the first time I ever tried consciously to make someone else laugh," Wilder said. "And when I was successful, after peeing in her pants, she'd say, 'Oh, Jerry, now look what you've made me do.' "

Wilder — who was born Jerome Silberman — went on to become a comic actor whose film credits included Willy Wonka & The Chocolate Factory and The Producers and Blazing Saddles. He died Monday of complications related to Alzheimer's.

When your mother gives you confidence about anything that you do, you carry that confidence with you. She made me believe that I could make someone laugh.

In a 2005 interview with Fresh Air, Wilder said that those moments with his mother sustained him throughout his career. "When your mother gives you confidence about anything that you do, you carry that confidence with you," he told Terry Gross. "She made me believe that I could make someone laugh."

Though Wilder was known for his comedic roles, he also had a serious side. He described his marriage to comedian Gilda Radner as an "odyssey" that was "wonderful, funny, tortuous, painful and sad." Radner, his third wife, died from ovarian cancer in 1989. He remarried in 1991.

Wilder faced his own cancer diagnosis in 2000 — but he wasn't afraid, and was in remission when he spoke with Gross in 2005. "I've had a very good life and a very good career," he said. "I have no regrets."

Today, we'll listen back to Wilder's 2005 Fresh Air interview. Click the play link above to hear the conversation, or read some highlights below.

On meeting Mel Brooks, with whom he would later work on The Producers, Blazing Saddles and Young Frankenstein

I was miscast in that production [of Mother Courage and Her Children] ... but it was with Anne Bancroft, whose boyfriend at the time was Mel Brooks, and that made my — I can't say my day, it made my life, in a way.

I met Mel backstage in Anne's dressing room. He was wearing one of those pea coats, pea jackets that were made famous by the Merchant Marines, and I admired it and he said, "You know, they used to call this a urine jacket, but it didn't sell."

I laughed and he laughed and after we saw each other several times he said, "Would you like to come to Fire Island and spend the weekend with Anne and me? I'd like to read the first 30 pages of this movie I'm writing called Springtime for Hitler."

I said, "I'd like that very much," and I went there one June weekend and he read me the first 30 pages of what was later called The Producers.

On auditioning for Zero Mostel, who played Max Bialystock in The Producers

Mel said, "I love you, but Zero doesn't know you, and he has the right of approval of whoever is going to play Leo Bloom, so come to the office and you'll do a reading with him."

So I went to the office on a Thursday or Friday morning and knocked on the door and Mel opened it and I saw Zero Mostel in the background and he said, "Come on in, come on in. Gene, this is Z; Z, this is Gene."

And I put out my hand to shake hands with him, and he took my hand [and] he pulled me up to his face, and he gave me a kiss on the lips. And all my nervousness went out the window.

I think he must've done it on purpose, because he understood actors and how I would naturally be a little nervous doing this, and I gave a very good reading, and then I got the part.

I was a very shy person in those days, and working with Zero [Mostel], who was bigger than life, helped me grow.

On what he learned from Mostel

You say the character [of Leo Bloom] was meek and insecure, and you could've been describing me as well. I was a very shy person in those days, and working with Zero, who was bigger than life, helped me grow. Zero was a strong influence on me.

We didn't go out to lunch, we always stayed in the studio ... and we'd have lunch together, a sandwich and a cup of soup, and he would talk to me about the days of the blacklisting and everything he went through, and they ruined his life for a while. ...

He wasn't afraid of authority in any form, and that's the part that influenced me the most. He would tell anyone anything, not to be impolite, but he'd show that he wasn't at all afraid of however much money that person [had] or whatever title they had in a company. It didn't scare him. Mel was very much the same way.

On getting the idea for Young Frankenstein

At the time, I didn't know why, but I know now that when I was a little boy, I was scared to death of the Frankenstein films ... and in all these years later, I wanted it to come out with a happy ending, and I think it was my fear of the Frankenstein movies when I was 8 and 9 and 10 years old that made me want to write that story.

Wilder's Nephew On The Actor's Comedic Talent And Alzheimer's Diagnosis

On working with Richard Pryor in Silver Streak

I met him for the first time in Calgary, in Canada. A very quiet, modest meeting. We gave each other a hug, he said how much he admired me, I said how much I admired him, and we started working the next morning, and we hit it off really well, and he taught me how to improvise on camera.

On his relationship with Gilda Radner

I met her on the first night of filming ... Hanky Panky that Sidney Poitier was directing. And it's funny, I was in costume and makeup — my tuxedo and makeup because I'd done a few shots before she arrived, and she told me later that she cried all the way in, in the car, because she knew that she was going to fall in love with me and want to get married.