Accessibility links
Cannabis Growers Seek Blue Ribbons For Their Buds At Oregon's State Fair This year, Oregon's Legislature designated marijuana, which is legal there for recreational use, as a farm crop. It debuted among funnel cakes, livestock and zucchini this summer at the state fair. 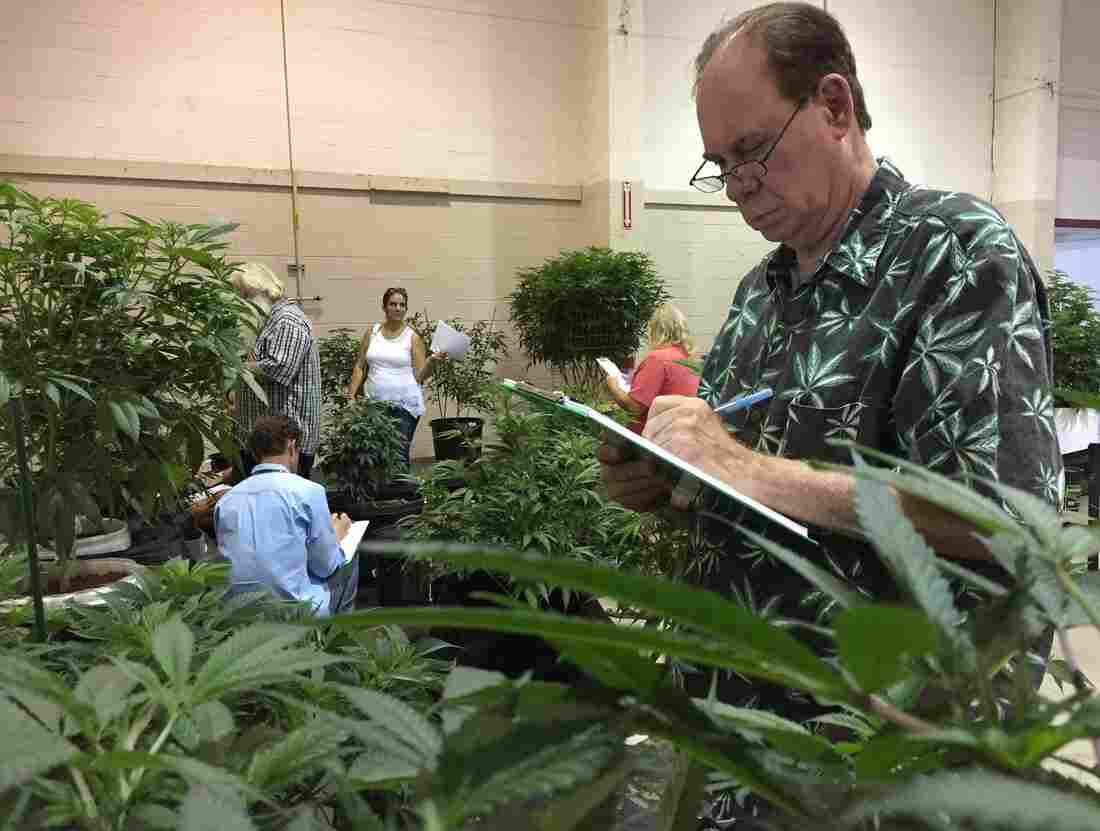 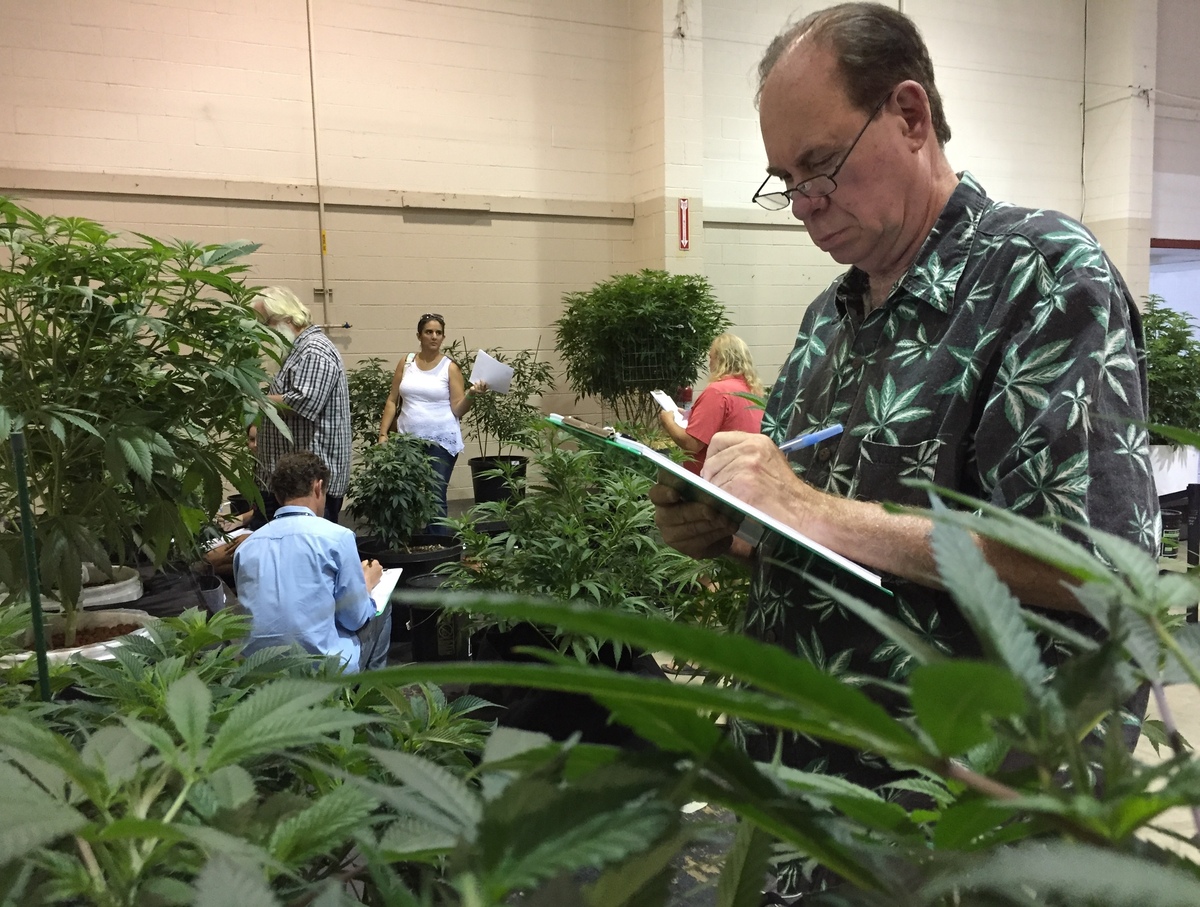 Ed Rosenthal, nicknamed the "Ganja Guru," judges marijuana plants on Aug. 13 at a competition designed to select nine specimens for display at the Oregon State Fair.

Whether you're in Maine or Michigan, state fairs have their own smell — a mix of hot oil from the curly fries, and that unmistakable livestock tent.

One exhibit at this summer's Oregon State Fair, though, has a particularly distinctive funk. It's the one introducing a new crop: marijuana.

"It was this year that the state Legislature designated cannabis as a farm crop. And the general public should know what it's all about," says Don Morse, the head of the Oregon Cannabis Business Council.

And the tent — which has a strong piney, somewhat skunky smell — features nine prize-winning marijuana plants. They're the first live pot plants that have ever been shown at a state fair.

To be clear, the judges at the fair in Salem, Ore., didn't actually sample the finished product. And the health and appearance of the plants don't necessarily translate to their potency, or how much of the psychoactive compounds are in the end result. But still, there's some glory to be had, says Mandy Seybert, one of the competitors.

"We've never shown anything at a state fair — it would be like my husband's dream to be able to show some of our cattle or his pigs or stuff," she says. "So it's a pretty big deal for us."

Seybert's livestock is back at the farm, but her cannabis plant took second place for the Indica variety. She's been fielding questions in the tent all day. 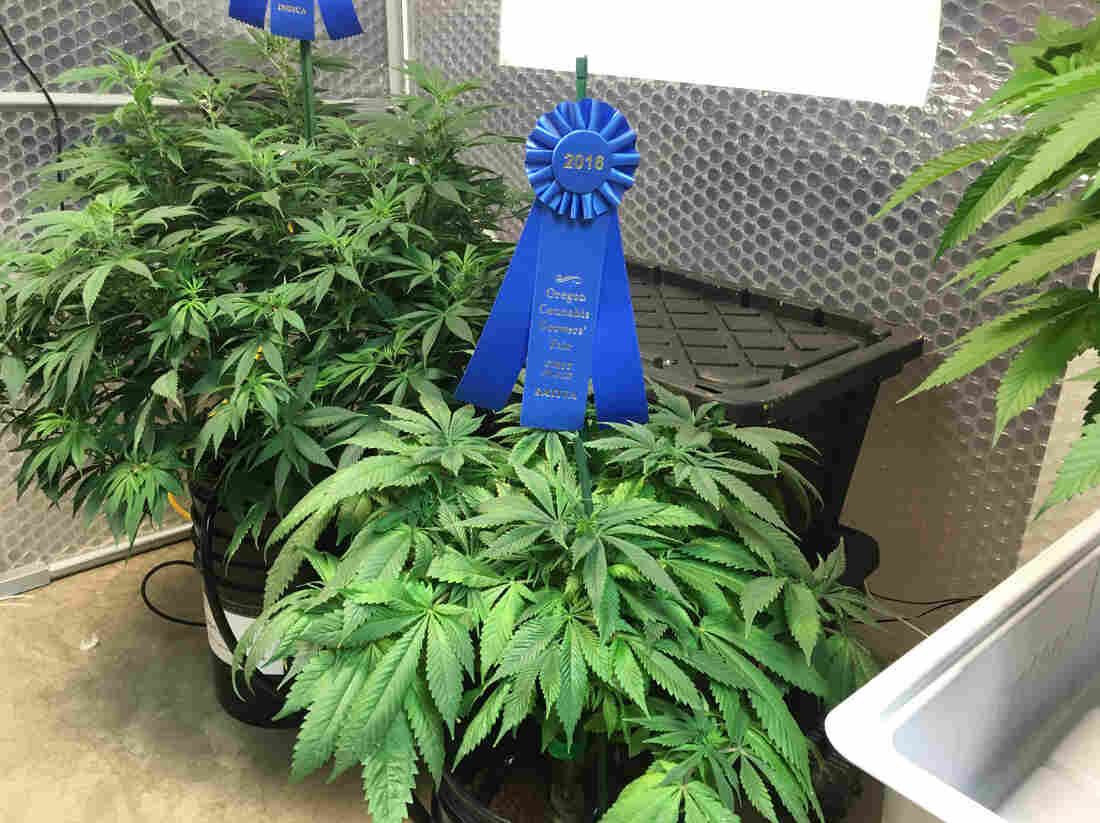 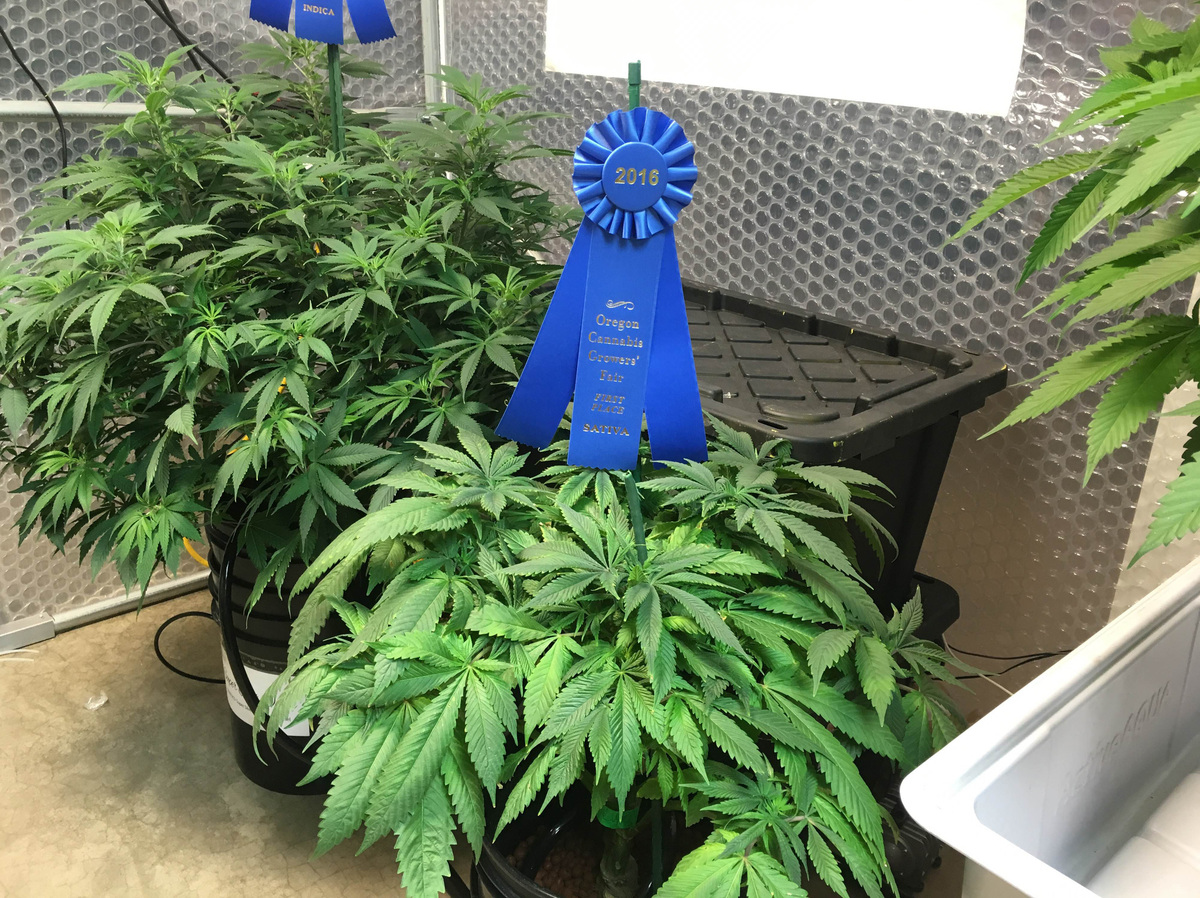 The first-place Sativa variety cannabis plant at the Oregon State Fair in Salem.

"Basically, 'What strains are these?' or 'I've never seen a plant up close!' or 'Oh, my plants look way better than this!' — that type of stuff," she says with a laugh.

Since a 2014 vote legalized recreational pot in Oregon, cannabis has become big business, setting up farms, opening dispensaries and taking in taxes.

So while this is the first time cannabis plants have been at a state fair, for Oregonians, it's not shocking — it's a photo op for folks like Garvin Reiter.

Like everyone else in the tent, Reiter is just sort of amused.

"It's not really much of a surprise, honestly, to see it at the state fair, because it's everywhere," he says. "Plus you can just go down to the store and buy it if you want some."

As with stores, the state fair tent has people checking IDs, to make sure visitors are over 21. But folks like Reiter are clearly having a bit more fun than they would at the corner shop.

"You know, it's up there with the prize-winning turnips," he says. "So that part you really gotta love."

Well, not quite. These plants are at the state fair — but they're not next to the turnips. The cannabis tent is in a pavilion with commercial vendors, people trying to win you over to new cleaning products and exotic pets. Don Morse, with the Oregon Cannabis Business Council, would love to see cannabis in the agricultural tent — just like any other Oregon crop.

Based on this year's state fair crowd, Oregon cannabis growers are well on their way to meeting that goal.