Accessibility links
RIMPAC Naval Exercise In Hawaii Has U.S., China Navies Training Together Even as China presses ahead with a military buildup in the South China Sea, the U.S. invited it to take part in the world's largest naval exercise at Pearl Harbor in Hawaii. 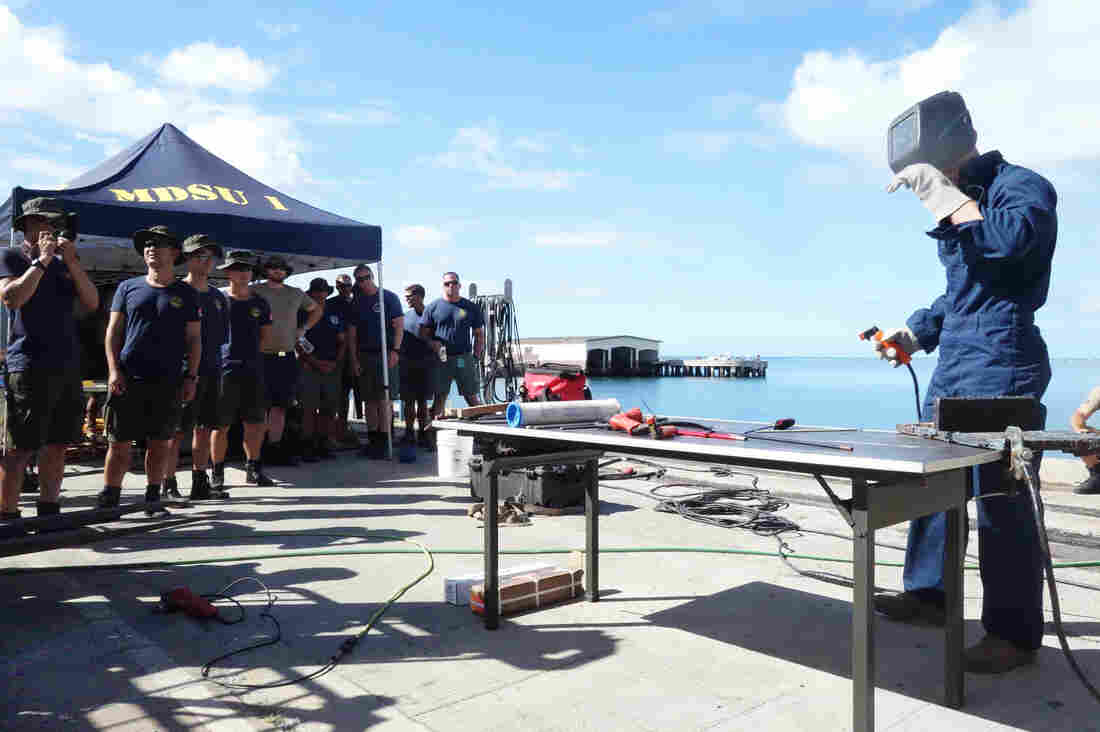 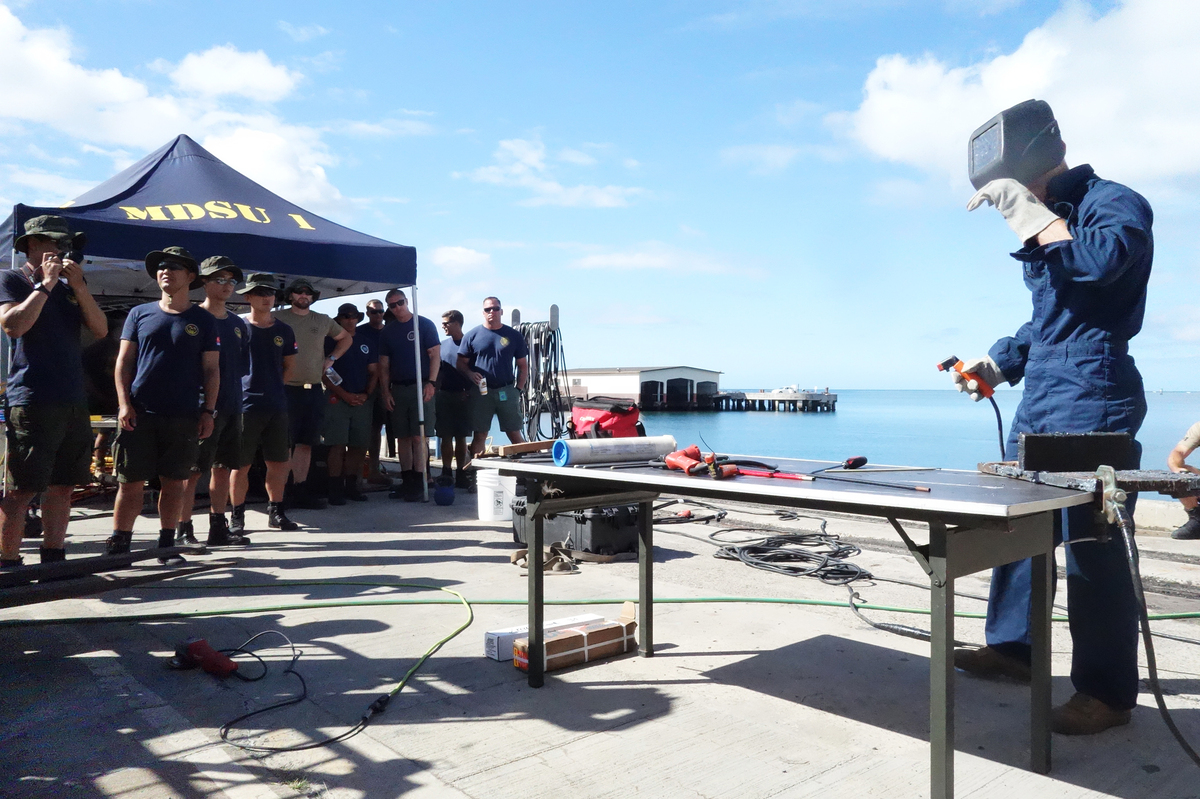 On a sweltering July morning, divers in full gear from the U.S. Navy's mobile diving and salvage unit jump, one by one, off a Pearl Harbor pier in Hawaii. Tethered to air supply hoses and armed with heavy equipment, the units dive about 20 feet deep into the Pacific to weld thick metal, a necessary skill in disasters or conflicts when ships or piers are damaged and need underwater repair.

The divers train for this regularly. But this time, it's a little different. Just behind them underwater are Chinese naval officers from the People's Liberation Army Navy.

This is all by design. The U.S. Navy, the world's largest, invited the Chinese, along with 25 other naval forces from around the world, to its Rim of the Pacific naval exercise, or RIMPAC, a monthlong drill that has taken place in Hawaii and Southern California every two years since 1971.

Relations between the U.S. and China are strained lately, in large part because of tensions in the South China Sea, through which half the world's trade passes. But the U.S. still invited China to participate in this joint naval exercise, continuing to reach out — at least at some levels — to a strategic foe. The Chinese first took part as an observer in 2012, and as an active participant in 2014 and this year.

RIMPAC has grown bigger and more inclusive each time it takes place, which means unlikely allies are teaming up. This year, South Korea and Japan, which have been more rivals than partners, conducted a missile exercise together in the water for the first time. The U.S. and China trained one another for natural disaster recovery scenarios, using advanced communications and staged earthquakes.

"RIMPAC is an exercise about building a partnership between all the countries, and I say all of the countries," said Commodore Mel Wise of the Royal Australian Navy. It assisted the U.S. in commanding this largest maritime exercise in the world, involving 45 ships, more than 200 aircraft and 25,000 sailors.

"One of the things you agree to do when you come to RIMPAC is that you agree to participate with all of the partner nations," Wise said.

But there are limits. China was allowed to drill with the U.S. when it came to natural disaster scenarios — but not combat war games. Given ratcheting tensions, the U.S. invitation for China to take part at all in its third RIMPAC, its second as a full participant, was hotly debated among a circle of Asia watchers and former military officials.

Defense Secretary Ash Carter made clear in April that China should not be excluded.

"If the Chinese want to participate, I think it's the right place for us to be," he said. "Come on, and instead of standing apart from everybody and isolating yourself and excluding yourself, try to be part of the system of cooperative nations that have made, as I said, the Asian miracle possible."

But in the run-up to this exercise, China's ambitions played out over real contested territory in the South China Sea. And in the same week that RIMPAC started, an international court ruled that China's claim to much of the South China Sea had no basis. 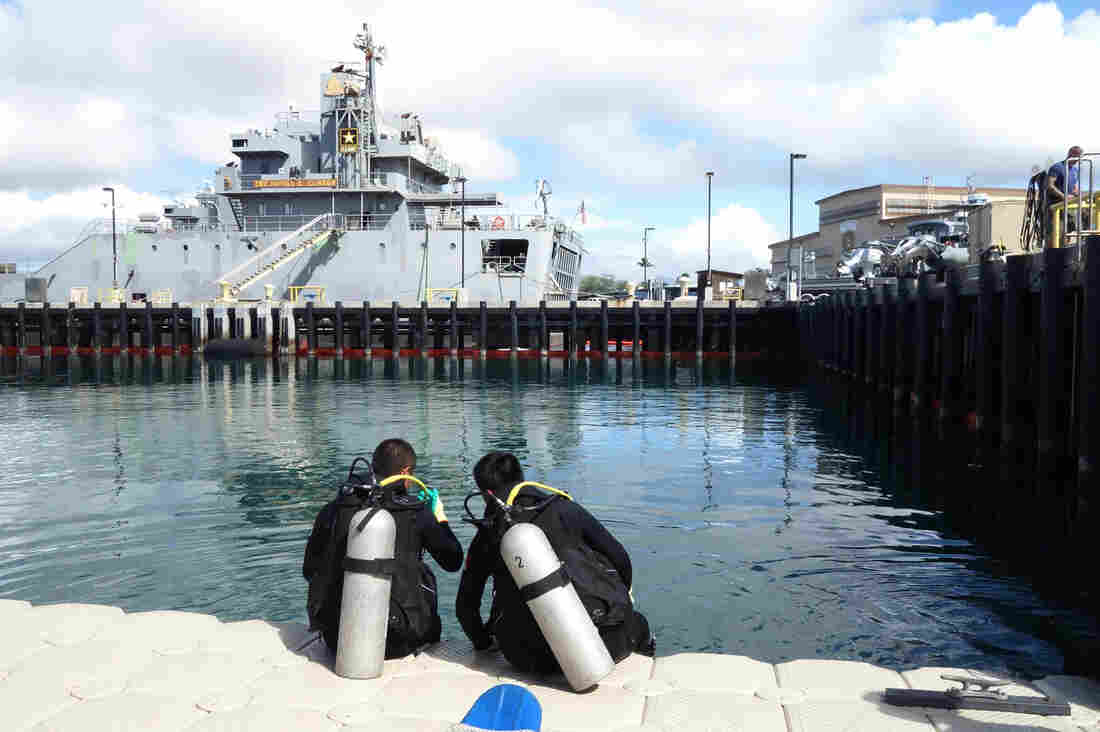 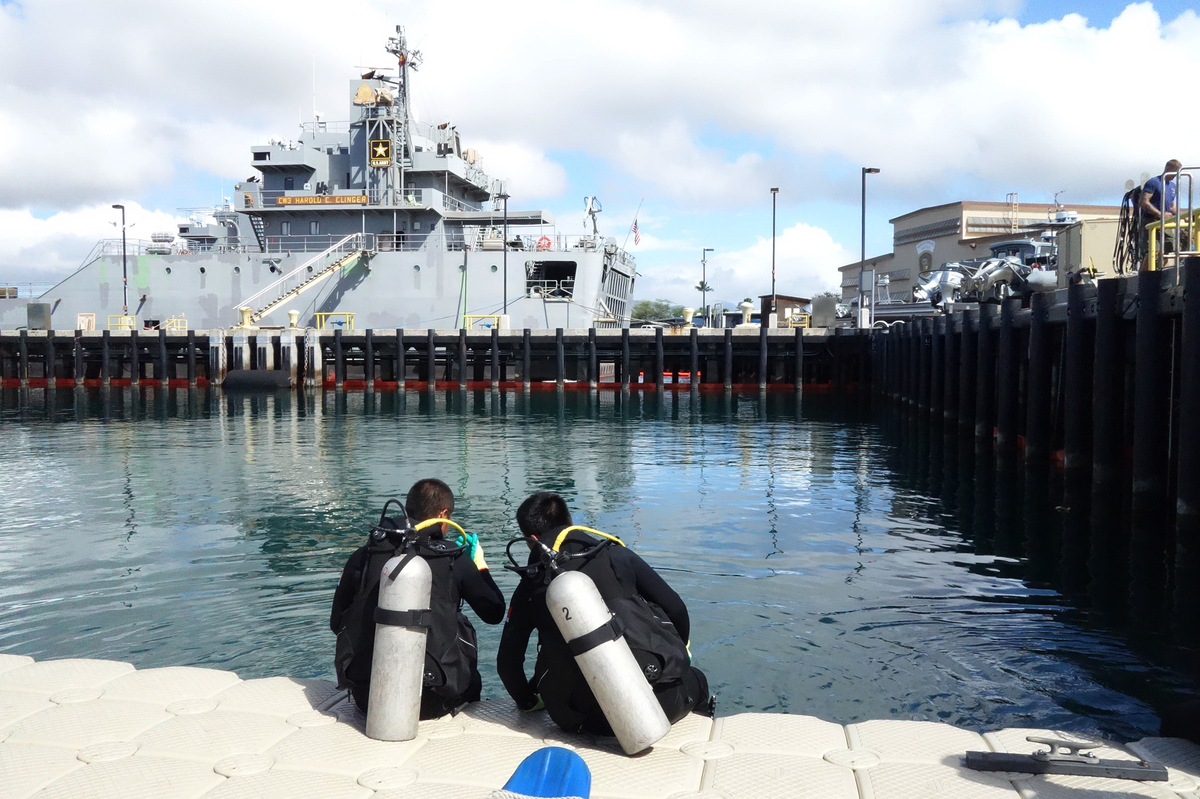 Two Chinese divers from the People's Liberation Army Navy are suited up and prepared to observe U.S. Navy divers in an underwater welding exercise.

Neither that decision nor other countries' longstanding claims to South China Sea islands have stopped China from expanding its presence and building airstrips and hangars on what were previously just rocks.

"I would not have been inclined to have invited the Chinese to RIMPAC," says Grant Newsham, a retired U.S. Marine colonel and former naval attache to the U.S. Embassy in Japan. China's participation in the 2014 RIMPAC didn't lead to greater cooperation overall, he says.

"I would suggest that having gone ahead and gotten physical domination in the South China Sea in the intervening two years, additionally, and a constant campaign of hectoring in the propaganda field, would suggest there really hasn't been much of an improvement in [China's] behavior," Newsham says.

Still, on the pier, the relationship seems friendly at the diver-to-diver level.

The U.S. divers teach in English, even though Chinese divers aren't necessarily proficient.

"I think all divers have a basic knowledge of what certain things mean. So it's all just body language," Navy diver Valerie DeFrates says.

She and other U.S. divers demonstrate their techniques while the Chinese take in the training. Chinese naval officer Hu Pei, a lieutenant commander, is highest ranking among his group.

"This is our diving working unit," he says, gesturing to his men. "First time come here."

Hu didn't have clearance to say anything more to journalists.

The divers hope practicing together will make things easier in the event of an actual natural disaster or conflict. Higher up, what becomes of the U.S. and China's Pearl Harbor partnership will depend on what happens after the exercises end.