Accessibility links
Watch The World Premiere Of Noura Mint Seymali's Video For 'Na Sane' The vocalist from Mauritania intertwines heritage and innovation in the first song from her new album, Arbina. The video gives audiences abroad a glimpse of her homeland in all its melancholy beauty. 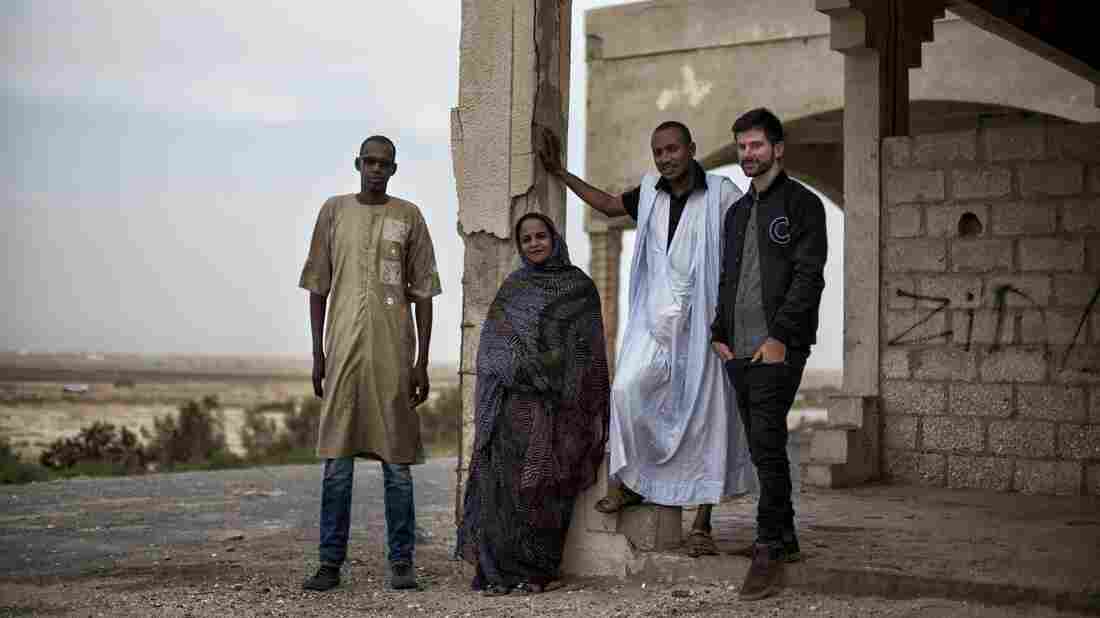 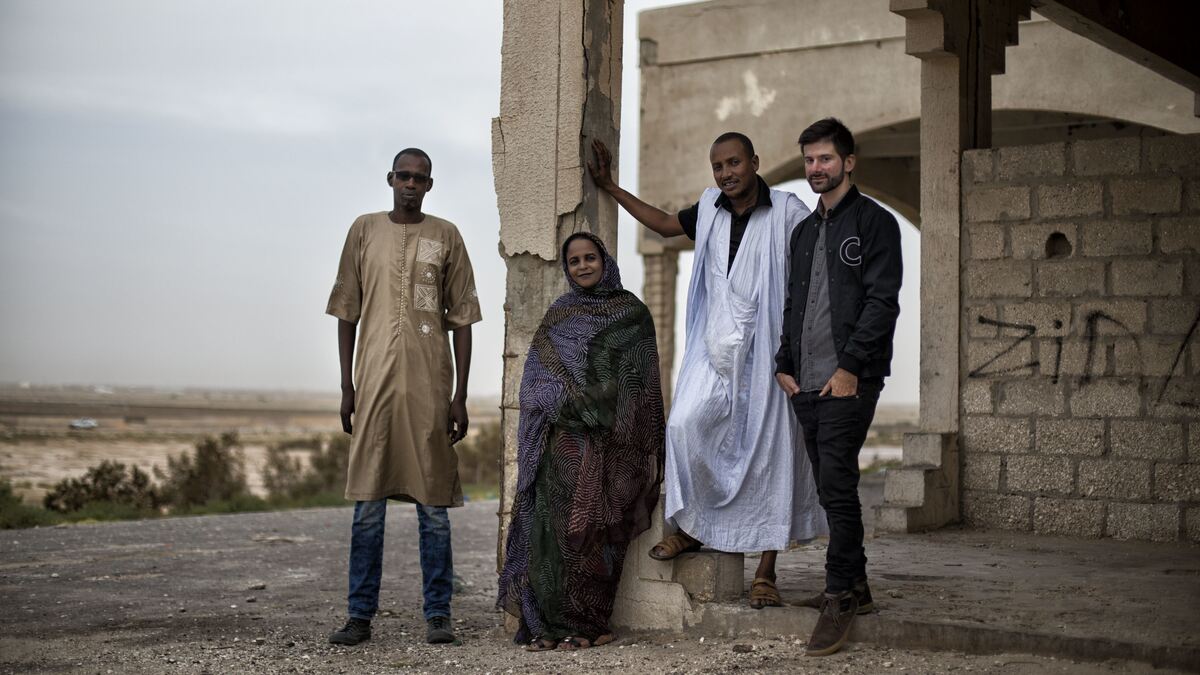 Bechir Malum/Courtesy of the artist

It was just two years ago that Mauritanian vocalist Noura Mint Seymali hit the international scene — but now, it's hard to imagine the scope of African music without her. The singer and her band blow listeners away with giddily woozy and dreamlike vocals; blistering guitar played by her husband, Jeiche Ould Chighaly; and the grounding elements of Ousmane Touré's bass and Matthew Tinari's drums.

Now, Seymali is about to release her second internationally available album, Arbina. She's kicking things off with a video — for her song "Na Sane" — that gives audiences abroad a little glimpse of her native land, which is wedged between the Berber and Arab countries of northwestern Africa and the sub-Saharan south. The desert stretches over the vast majority of Mauritania's territory and is capped by the Richat Structure, a famous "bull's-eye" — also known as the "Eye of the Sahara" — that astronauts can see from space. Just over 4 million people live in this country that is nearly twice as big as Texas. It's a severe and unforgiving landscape, but one that possesses a very particular kind of melancholy beauty.

Director Loïc Hoquet and producer-drummer Tinari decided to shoot the video for "Na Sane" on a road trip through Mauritania. They rented a Toyota Hilux pick-up truck and a black Mercedes taxi and set off on the road that links Mauritania's capital city, Nouakchott, with its second-largest city, Nouadhibou (population roughly 118,000), near the border of Western Sahara territory.

The scenes from the road are intercut with glimpses of a party — and everyone in the video is a relative or friend of Seymali and Chighaly. As Tinari wrote in an email, "Essentially, we just threw an impromptu family barbecue. One of the dancers is Noura's brother Baba; some of the younger boys are nephews of Jeiche. The girl dancer is a friend from the neighborhood. It was a family affair!" 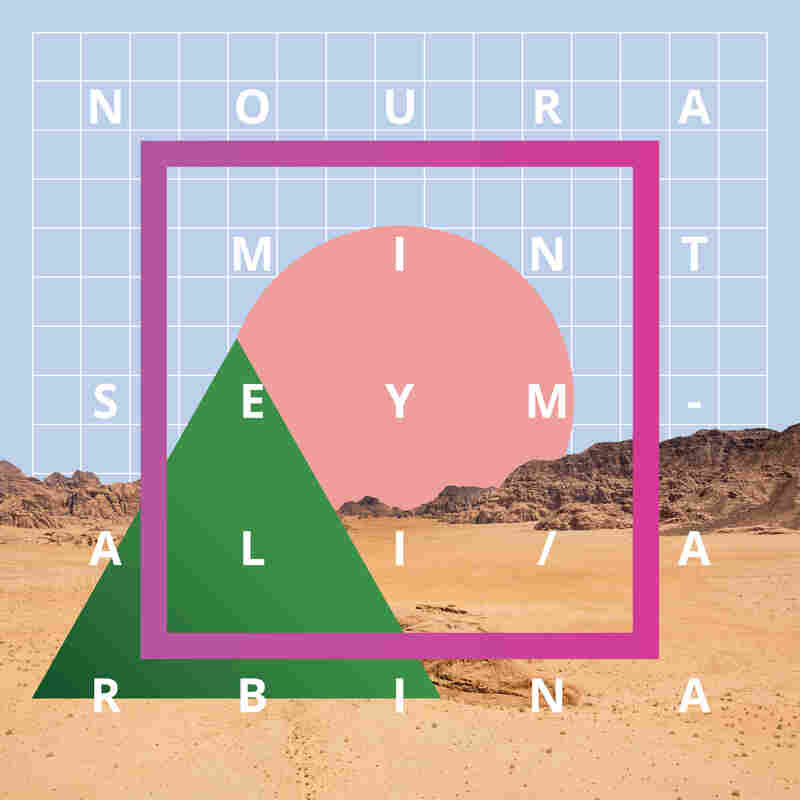 Part of the shoot also took place at a ridge that overlooks the Atlantic Ocean — yes, this is still Mauritania. The band plays at Cap Blanc, which used to be known as the "largest ship graveyard in the world." It's where owners paid bribes to illegally abandon their old vessels and left them to rot in the Cap Blanc harbor. Tinari says, "There has been a recent U.N. project to dismantle the decaying ships, and many of them are no longer there." Still, one can imagine those ghostly shipping boats shimmering in the waters behind the band.

This Mauritanian sojourn is a perfect fit for Seymali, considering how deeply rooted she is in her home culture. Both she and her husband are Moorish griots; in west Africa, griots are a community's storytellers, historians, poets — and musicians. Seymali comes from a long line of griots, in fact; her stepmother, Dimi Mint Abba, was a famous Mauritanian singer.

Fittingly, then, Seymali calls upon tradition even as she infuses her music with psychedelia; her lyrics, too, intertwine those ideas of heritage and innovation. "Na Sane" begins with two traditional lines, followed by a line penned in honor of Chighaly's older brother Lamar (also a talented guitarist) by Seymali's late father-in-law, the musician Youba El Moctar Chighaly, before concluding with words of her own:

Go to sleep at the house of Dakhman

The music of the band, the azawan, is blending well with my song,

Protect us from bad energy, help us preserve the vibe.