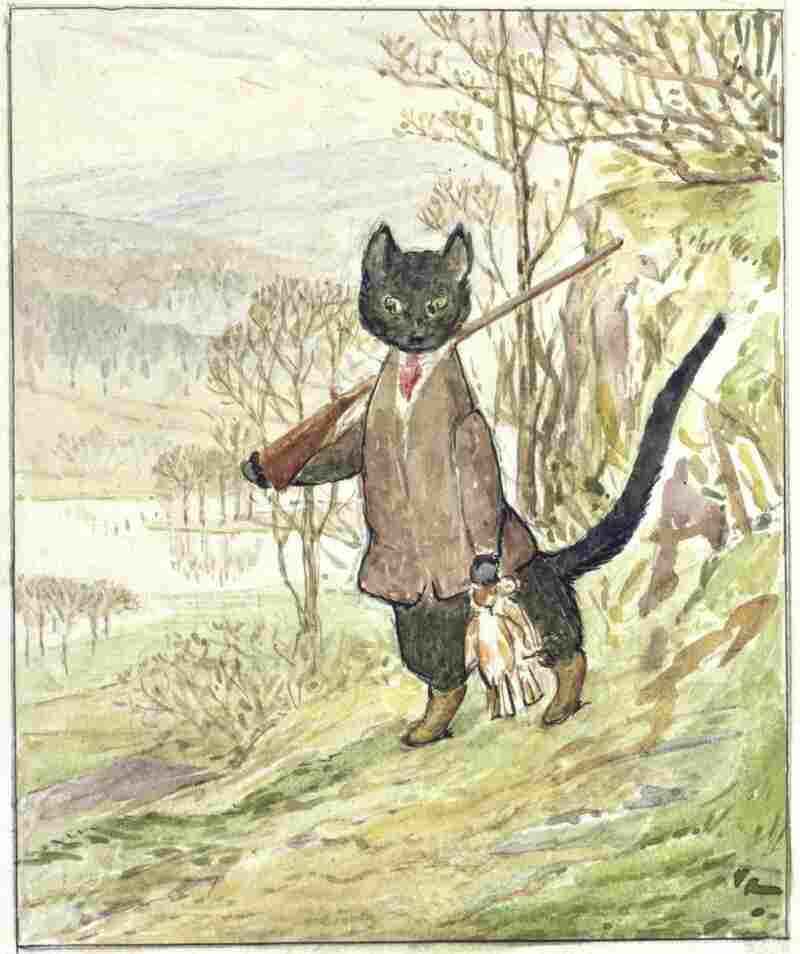 Beatrix Potter wrote three drafts of The Tale of Kitty-in-Boots and did one watercolor illustration (above). But the book was left incomplete when she died in 1943, and it is now being published posthumously, with illustrations by Quentin Blake. Courtesy Frederick Warne Co. the V&A Museum via Penguin hide caption 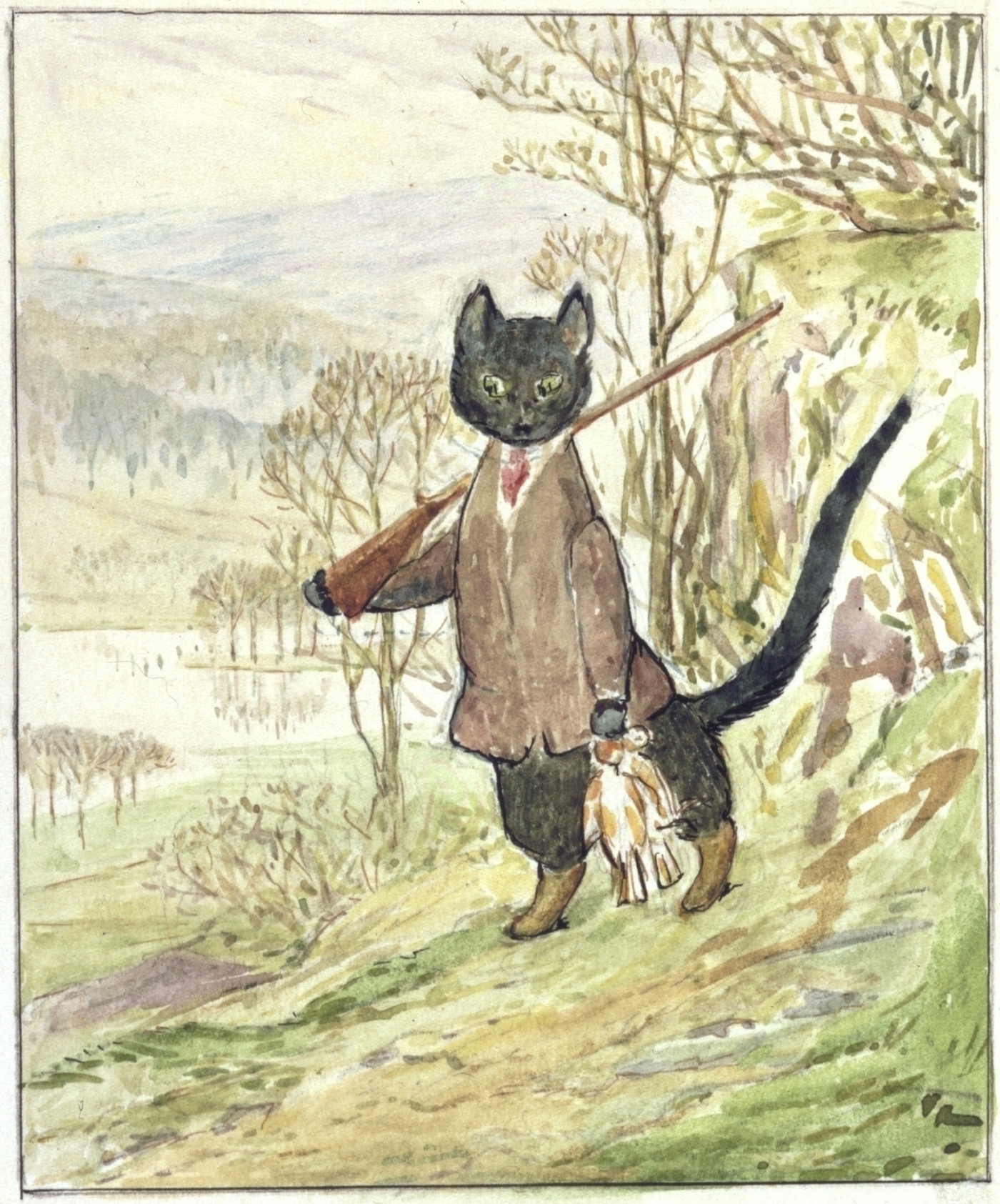 Beatrix Potter wrote three drafts of The Tale of Kitty-in-Boots and did one watercolor illustration (above). But the book was left incomplete when she died in 1943, and it is now being published posthumously, with illustrations by Quentin Blake.

This year marks the 150th anniversary of the birth of Beatrix Potter, one of the most enduring and cherished children's authors of all time. To commemorate the anniversary, a new, never-before-published story by Potter, called The Tale of Kitty in Boots, has been released.

Readers, we've been down this road before, not too long ago, and it didn't end well.

Atticus Finch's reputation took a hit after his exposure in Harper Lee's Go Set A Watchman as a segregationist and reactionary extremist. Do we really want to risk losing cherished illusions about the likes of Squirrel Nutkin and Jemima Puddle-Duck in exchange for the novelty of a freshly unearthed tale by Beatrix Potter?

Oh, but it's already too late for this question. As many of us learned in Potter's most famous story, The Tale of Peter Rabbit, once the garden of unknown delights beckons, it's all but impossible to resist entering in.

Here's the backstory to this "new" Beatrix Potter book: Two years ago, a woman named Jo Hanks who's an editor at Penguin Random House in the United Kingdom came upon a reference to a letter that Potter wrote in 1914. In that letter, Potter mentioned working on the manuscript of a story about "a well-behaved prime black Kitty cat who leads a rather double life." 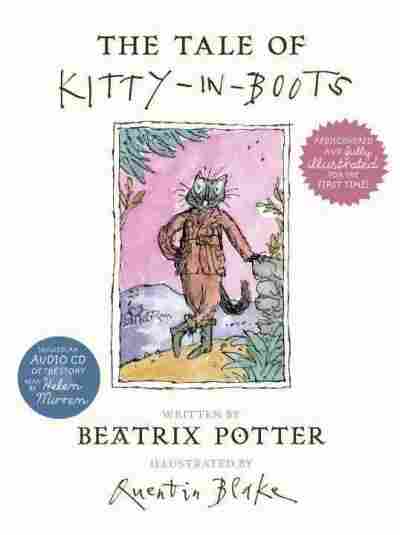 Hanks dug into Potter's archives at The Victoria & Albert Museum and she found the manuscript of The Tale of Kitty-in-Boots. Potter had written three drafts of the story and had done one watercolor illustration of Kitty, but for various reasons, she died in 1943 without completing the book.

Skip to the present and this lavish debut edition of The Tale of Kitty-in-Boots.

To use an antiquated phrase that Potter herself would have known, this edition is "done up brown." Quentin Blake, best known for his work on Roald Dahl's books, has created the illustrations and, on an audio CD included with the book, Helen Mirren reads the story.

Ironically, such glitzy trappings make for a disconcerting Potter reading experience. After all, the charm of Potter's tales emanates, in part, from their humility — the signature compactness of her books and animal characters. Add to that, the fact that Blake's style as an illustrator is jittery and impressionistic, in contrast to Potter's fluid precision. His illustrations end up emphasizing, rather than countering, the violence that lurks in even the most amiable Potter tale.

That ominous tone is set in the very first story when Peter Rabbit's mother gives him and his sisters — Flopsy, Mopsy and Cotton-tail — a warning: "Now, my dears," said old Mrs. Rabbit one morning, "you may go into the fields or down the lane, but don't go into Mr. McGregor's garden: your Father had an accident there; he was put in a pie by Mrs. McGregor." In its own quaint way, Potter's landscape is every bit as Gothic as the Brontes'.

And, sometimes, as in The Tale of Kitty-in-Boots, Potter's stories are nearly as surreal as Lewis Carroll's. The "Kitty" in question here calls herself "Miss Catherine St. Quintin," and she does, indeed, lead a double life. By day she's the docile pet of a kind old lady; by night she's a poacher who prowls the countryside armed with an air-gun and dressed in "a gentleman's Norfolk jacket, and little fur-lined boots."

Kitty is such a convincing gender nonconformist that she's mistaken for "a sportsman" by Mrs. Tiggy-Winkle, the hedge-hog from an earlier tale. Other recognizable furry faces include fellow feline Tabitha Twitchit, Mr. Tod the creepy fox and a much older Peter Rabbit, described as "stout" and "very fat." Rest assured, this is the closest we come here to that dread Atticus Finch moment in which a beloved character is changed for the worse.

Perhaps the best thing about this "new" story is that it will send some readers back to the originals and to the life of the extraordinary woman who wrote them.

Newly discovered manuscripts by revered authors hold out the promise of familiar, yet fresh, literary magic; in truth, though, The Tale of Kitty-in-Boots is just a curious afterword to the 24 children's books Potter completed in her lifetime. Perhaps the best thing about this "new" story is that it will send some readers back to the originals and to the life of the extraordinary woman who wrote them.

Potter was a naturalist, fascinated by fungi; she was a shrewd businesswoman, who patented an early "Peter Rabbit" doll and other spin-off merchandise; and she was an environmentalist, responsible for the preservation of much of The Lake District in England. Potter's tales sprang from her deep appreciation of all creatures slight and small, but — as a woman and a writer — she was a smart, tough cookie; certainly no Mrs. Tiggy-Winkle.