Accessibility links
Donald Trump Makes Nice In Mexico, Talks Tougher Than Ever Just Hours Later In Phoenix If this was the opportunity for a turnaround speech that changed the broad public perception of the candidate, it was a moment not only missed but thrust away with both hands. 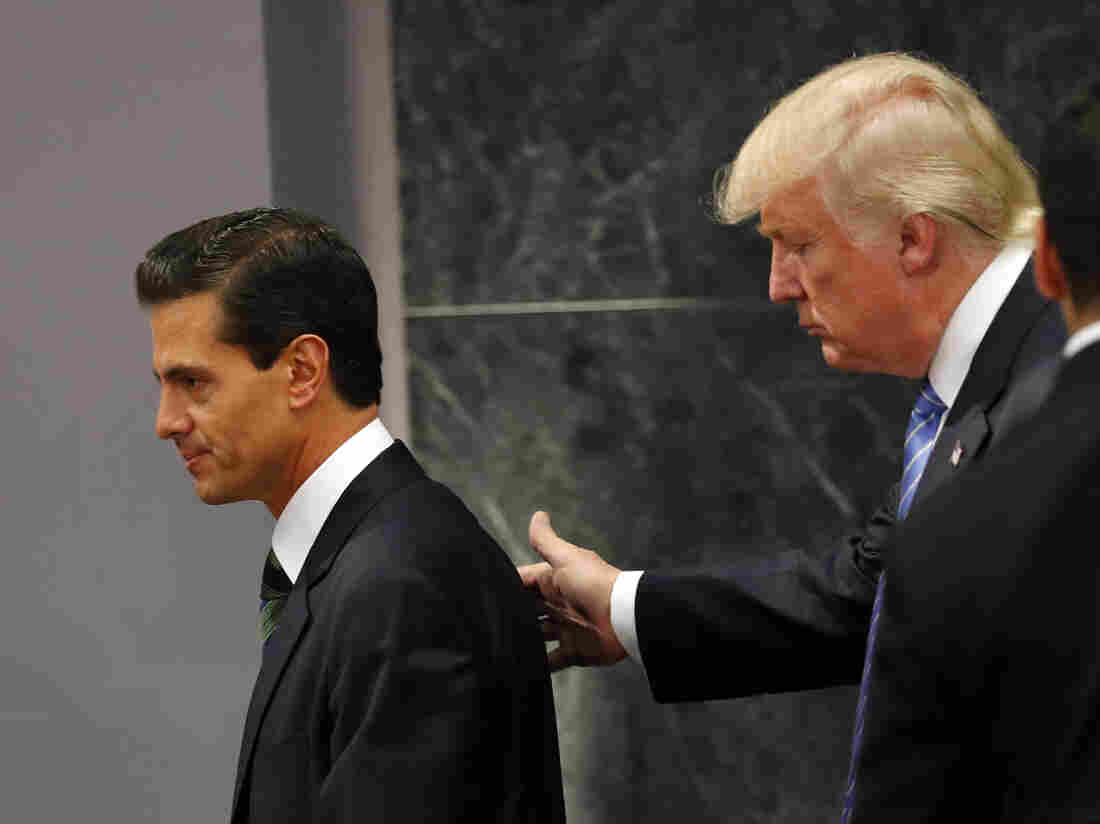 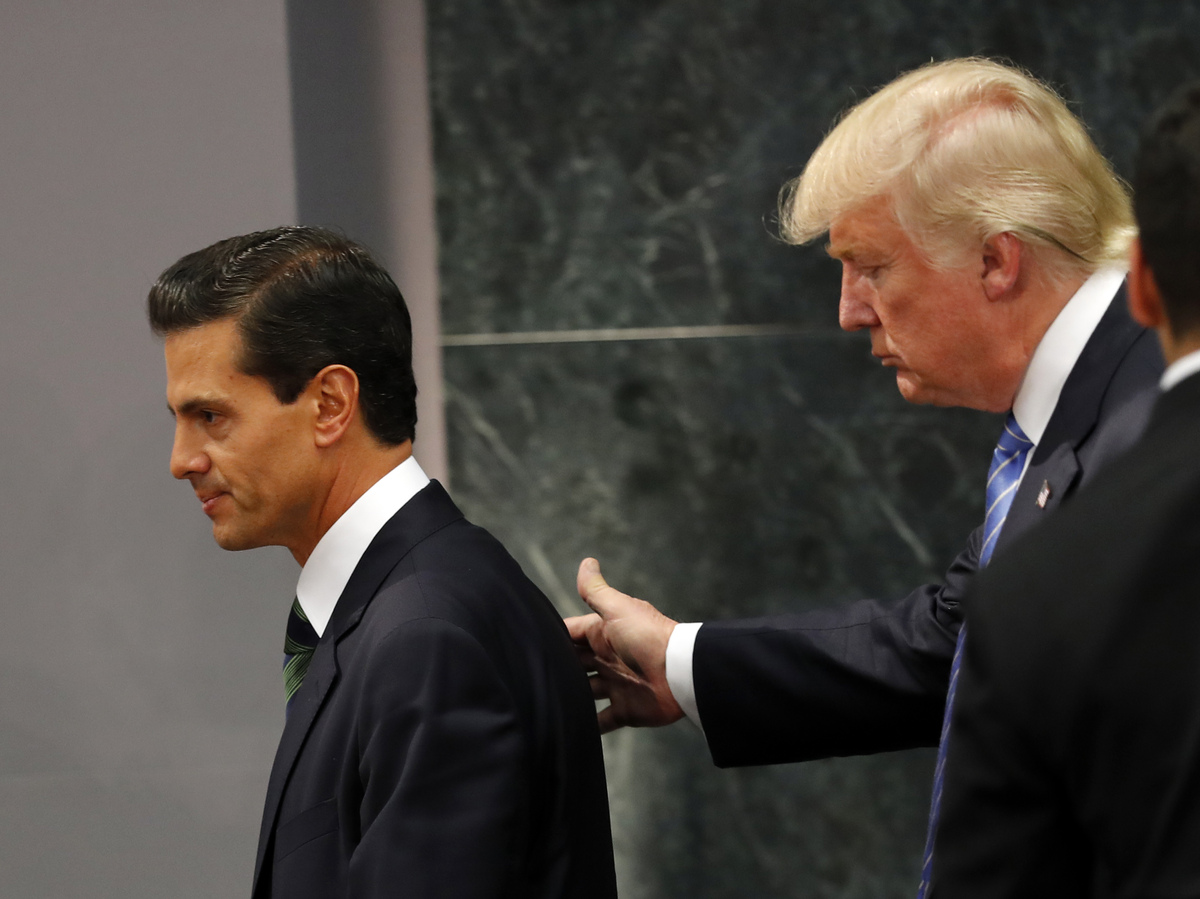 Donald Trump has provided the political world with many moving moments over the past year, but none quite like the whiplash mood swing between his daytime and nighttime performances in Mexico City and Phoenix on Wednesday.

In the daylight hours, Trump struck his most presidential pose to date with a solemn (if somewhat grumpy) reading of prepared remarks at a news conference alongside Mexico's President Enrique Peña Nieto. That somber event, inside the Mexican presidential residence, epitomized the more moderate image Trump has pursued on immigration issues over the past 10 days.

But as night fell in Phoenix, back in the U.S.A., Trump mounted the stage in prime time and quickly caught fire. He poured forth an hourlong harangue against all things alien, highlighting the lurid crimes of a handful of illegal immigrants as if to define the character of millions. He also promised to build "a beautiful wall" across the entire U.S.-Mexico border and create a "deportation task force" that would eventually guarantee that "the bad ones are gone."

On the subject of the wall, Trump departed from his script to assure his listeners that Mexico would indeed pay for it — adding, "They may not know it yet, but they will." In so doing, he as much as acknowledged that Peña Nieto had told him something different earlier in the day.

That was not a minor point, but rather a sore one. The issue of the wall's cost had taken over the news and Twitter feeds earlier in the evening. Trump himself had insisted at the news conference in Mexico City that the two men did not discuss the financing of the wall. Peña Nieto, who did not contradict Trump at the time (maintaining a striking deference to the American throughout their joint appearance), later tweeted that he had begun their meeting by saying Mexico would never pay for such a wall, a stance Mexican officials have taken consistently.

None of the Trump surrogates appearing across the media landscape Wednesday night seemed to dispute this, saying rather that the Wednesday meeting had "not been a negotiation" and that more formal talks would ensue on the wall and its financing. Rest assured, they seemed to say, Mexico will come around.

Throughout the Phoenix speech, Trump read from a teleprompter but supercharged the script with his own asides and add-ons, many of which riled the already raucous crowd to transports of delight. At one moment, promising to rid the land of criminal immigrants, he shouted that "in the first hour they are gone," and the throng exulted. Trump in such moments would back away and himself applaud until the roar subsided.

Listening to the speech, marveling at the about-face maneuver, one could almost hear the spirited debate within the councils of Trump's campaign. One imagined Kellyanne Conway, the pollster-cum-campaign manager, arguing for the quickie trip to Mexico and the confab with Peña Nieto. Since stepping up in mid-August, she has been seen as a moderating influence, seeking a new tone and tenor more appealing to white suburban voters (especially women and college graduates).

With Conway seeming to be ascendant, one could easily imagine the day ending with a very different speech in Phoenix. Would Trump not hail his conquest of Mexico City, citing his domination of the news conference where he practically had the Mexican president poised on his knee? Would Trump not repeat his lines of praise for "first, second and third-generation Mexican Americans" he said were "beyond reproach" and even "spectacular, hard-working people"?

The die seemed to be cast, and the timing seemed propitious. Because two weeks of adverse publicity about the Clinton Foundation and its donors and about newly discovered emails at the State Department have helped erode Hillary Clinton's already weak standing with voters. For the first time, her disapproval numbers were almost equal to Trump's. Conway seemed to have found just the right moment to raise her candidate's acceptability score in contrast with his opponent.

But if this was the opportunity for a turnaround that changed the broad public perception of Trump, it was a moment not only missed but thrust away with both hands.

For as soon as that moderating narrative got airborne, Trump's speech in Phoenix took off after it with the speed and fury of an anti-aircraft missile. The explosion as the two met in midair against the desert sky was spectacular indeed.

That intercept was launched, in all likelihood, from the campaign's other new major domo, Steve Bannon, the former publisher of Breitbart.com, the self-styled voice of the alt-right movement.

Bannon, now called the CEO of the Trump campaign, has been a fan of the hard-line approach on immigration as well as other issues. And whether he or another wordsmith in the Trump camp wrote the script, it was the fuel for one of the candidate's most incendiary performances.

In the speech, Trump not only doubled down on the wall and the invoice to Mexico, but on a "deportation task force" that would either drive the undocumented out of the country of their own accord or arrest them and send them to their countries of origin. The "softening" often promised in recent days seemed to consist only in the delay of the deportation endeavor until the wall could be completed and all the criminal elements of the illegal population first removed.

Trump made a point of including in his ban the "dreamers," present in the U.S. now as adults because they were brought to the country as minor children by their parents. This has been an especially popular target group for immigration reformers, and President Obama protected them from deportation orders with one of his executive actions.

At some point, Trump allowed, "we will bring back the good ones." But moments after making this concession to what he has called "being humane about it," Trump was filling the stage with the grieving parents of people killed by immigrants in the country illegally.

After a day spent putting his weight down on one foot, the Republican nominee was standing firm on the other. And he left little doubt where he would remain through the rest of this campaign.