Accessibility links
NFL And Marijuana: How Players Can Benefit From The Drug The NFL is physically brutal. Some say marijuana can alleviate pain, but it's still illegal in most places. Some players want their league to take a closer look at the benefits of the drug. 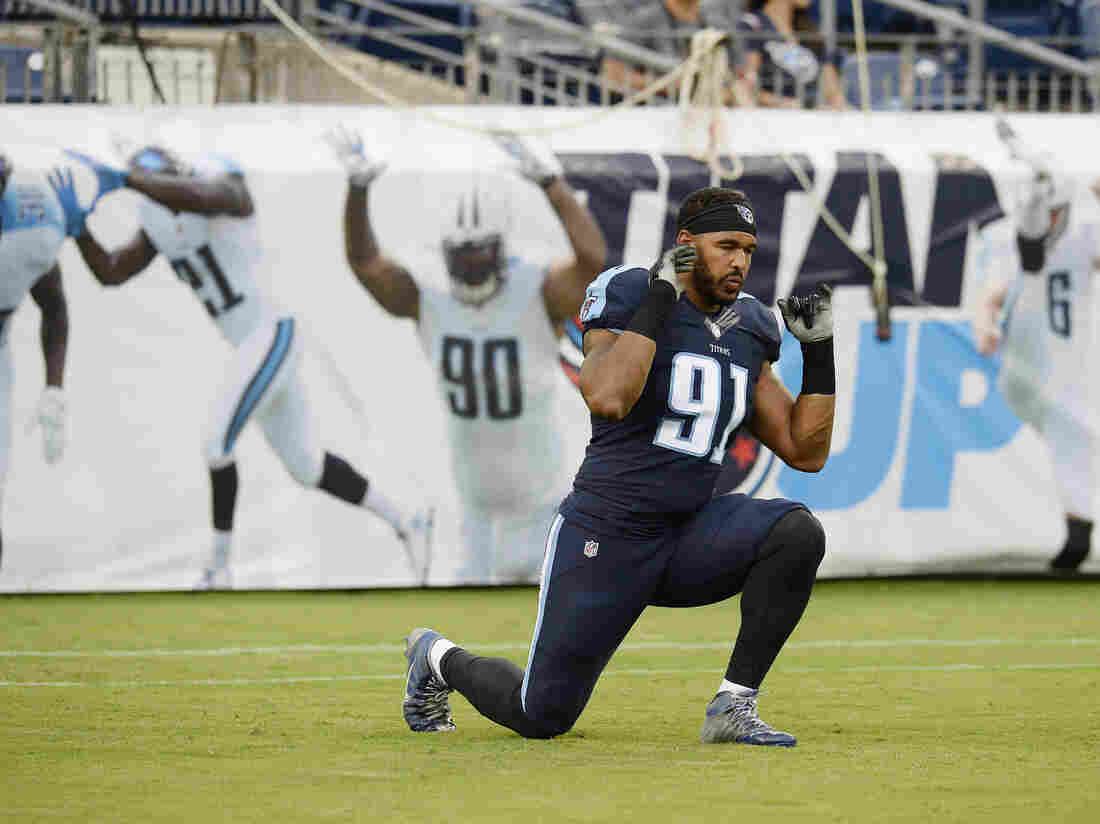 Tennessee Titans outside linebacker Derrick Morgan warms up before the first half of an NFL preseason football game between the Tennessee Titans and the San Diego Chargers, Saturday, Aug. 13, 2016. Mark Zaleski/AP hide caption 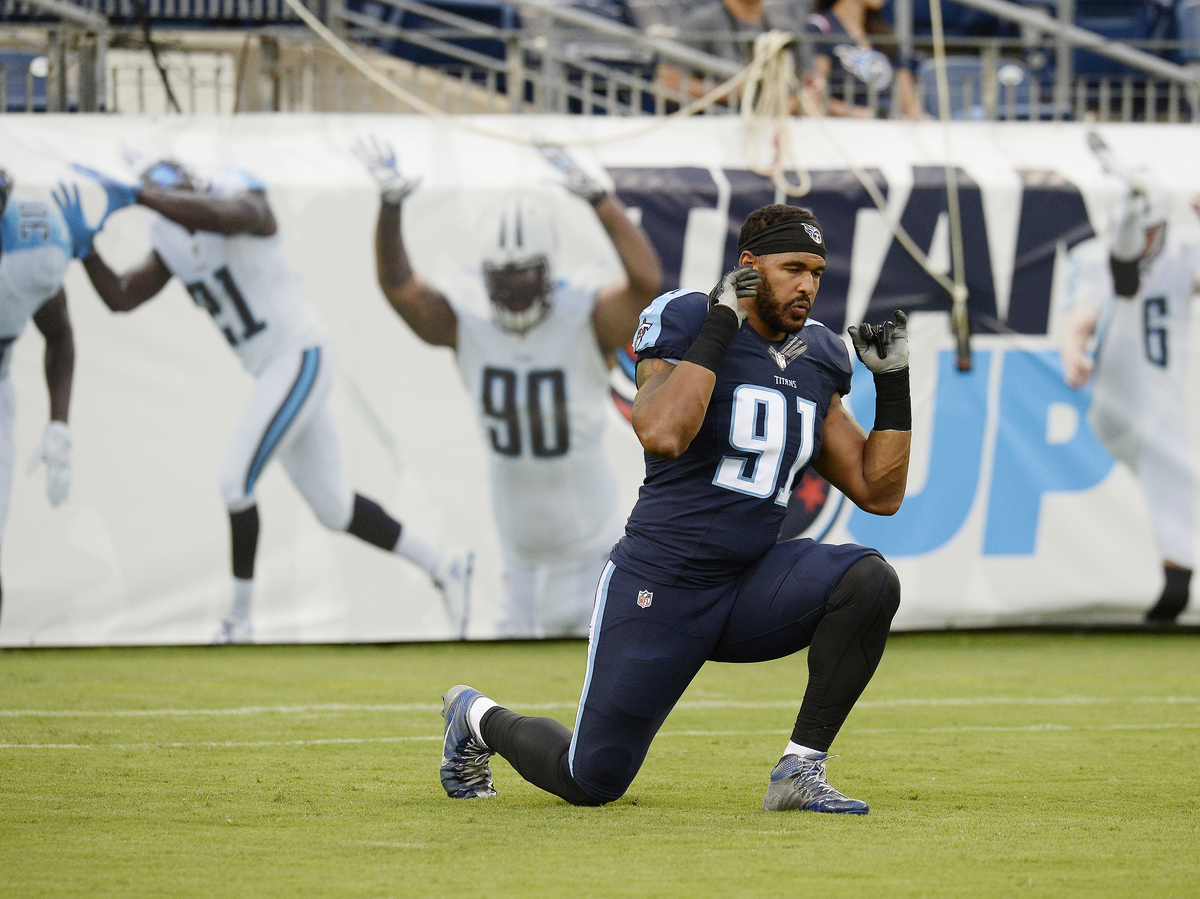 Tennessee Titans outside linebacker Derrick Morgan warms up before the first half of an NFL preseason football game between the Tennessee Titans and the San Diego Chargers, Saturday, Aug. 13, 2016.

The hard line against marijuana is softening all across the country.

Twenty-five states and the District of Columbia allow some form of marijuana use, mostly for medicinal purposes, though a few allow recreational use. And more states could decriminalize marijuana this year. But if you play in the NFL and you use weed it could cost you your job.

Tennessee Titans linebacker Derrick Morgan would like to change that; he would at least like the NFL to look into the health benefits of marijuana in a profession where injuries and ongoing pain is normal.

Morgan is not the first NFL player to speak publicly on the matter. Former Baltimore Ravens offensive lineman Eugene Monroe has also been an outspoken advocate for marijuana research. In announcing his retirement from football in July, he said in a statement:

"The last 18 years have been full of traumatic injuries to both my head and my body. I'm not complaining, just stating a fact. Has the damage to my brain already been done? Do I have CTE? I hope I don't, but over 90% of the brains of former NFL players that have been examined showed signs of the disease. I am terrified."

NPR's Michel Martin recently spoke with Morgan from member station WPLN in Nashville. The NFL player spoke about Monroe and both of their stances on the use of marijuana in the NFL.

On how he got involved in the issue

Maybe about a year and a half ago, all the CTE [chronic traumatic encephalopathy] and the traumatic brain injury stuff was hitting in the news. And to me that was very alarming, so I really started exploring what my options were. And there really weren't any [options] just readily available to you for protecting your brain, protecting [your] health from the trauma you experience playing football.

I actually was watching the CNN documentary on weed and I'd seen this little girl named Charlotte, she had epilepsy, hundreds of seizures a week. And they started giving her this cannabis oil and it was a significant reduction in her seizures almost overnight.

Marijuana Extract May Help Some Children With Epilepsy, Study Finds

So I started looking into it, starting researching and educating myself, reached out to Eugene Monroe [former offensive tackle for the Baltimore Ravens] because I've seen him publicly advocating for it. [I] reached out to him and he just started extending his pool of resources and just kind of share[d] with me his story and his journey on it. And the more and more I researched it, the more and more I got comfortable about talking about it.

On what other players have told him privately

I've talked to several players about it; they have a lot of interest in it. Guys are concerned about their health and want to know what their options are. So I've gotten a lot of support and players reaching out who've been curious about it. So I've just been really trying to share all the information I have with them — connecting them to the right people and resources.

For me, I wish it didn't have to be cannabis that I had to come out publicly and talk about it. But the more and more I research this, I'm like: Wow, this is something that, it shows to be very promising. You know, a lot of people are benefiting from it. ... I've got to spread the awareness, I've got to get people talking about this.

On how the NFL has responded

I really haven't had too much conversation with the NFL. I think where it starts is the delegation of resources to researching it. I'm not going sit here and say, "Hey, look, we need to take this off the banned substance list and let guys use it freely."

What I'm asking for is just a thorough look into it — research into it. There's a lot of anecdotal evidence out there of people benefiting from it. But I think we need some clinical research into it in order to make some progress.

Yes, I think so — both of those different things. Pain management — obviously we have an opioid epidemic in our country, the NFL is not immune to that. So definitely as an alternative to the prescription painkillers and then also as a protectant for your brain.

We're banging heads every play. So to have something that could possibly be a neuroprotectant, I think that's definitely worth looking into — when there really aren't any options for us to be proactive about, you know, that aspect of our health. So on both of those fronts: pain management and protecting your brain from trauma.