Accessibility links
Book Review: 'A Gentleman In Moscow,' By Amor Towles Amor Towles' new novel stars a Russian aristocrat, sentenced by the Soviets to permanent house arrest in a luxury hotel. It's a frothy romp that tends to overlook the reality of life under Stalin.

'A Gentleman In Moscow' Is A Grand Hotel Adventure

'A Gentleman In Moscow' Is A Grand Hotel Adventure 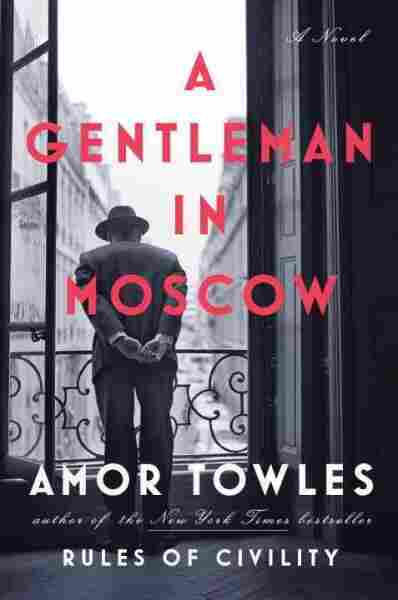 A Gentleman in Moscow

Count Alexander Rostov — recipient of the Order of Saint Andrew, member of the Jockey Club, Master of the Hunt — is a "Former Person." Russia's new Soviet masters have sentenced him, improbably enough, to house arrest in Moscow's luxurious Metropol hotel, where he lives out his days decorating the dining room with his bon mots and dashing around like Eloise, if Eloise were set in a twee version of Stalinist Russia.

"The mind is its own place, and in itself / Can make a heav'n of hell, a hell of heav'n," Milton's charismatic Satan tells us — although the finest hotel in Moscow, with its restaurants and barber and elegant clientele, is a bit of a stretch for the fiery pits of damnation (or the snowdrifts of Siberia, for that matter). Anyways, thus confined, Rostov passes the decades making a whole world out of a hotel and the people in it — a precocious 9-year-old, a moody chef, the French maître d', and so on. He is not the king of infinite space, exactly, but he does live a full and rich life according to the principle that, "If one did not master one's circumstances, one was bound to be mastered by them."

A Gentleman in Moscow is a novel that aims to charm, not be the axe for the frozen sea within us. And the result is a winning, stylish novel that keeps things easy. Flair is always the goal — Towles never lets anyone merely say goodbye when they could bid adieu, never puts a period where an exclamation point or dramatic ellipsis could stand. In his narratorial guise, he likes to drop in from the sky in dramatic asides, rhetorical questions, and cute self-referential footnotes.

'A Gentleman in Moscow' is a novel that aims to charm, not be the axe for the frozen sea within us.

And then there are the digressive flights. When a sinister hotel waiter (and Bolshevik stooge) suggests the wrong wine to accompany Latvian stew, the Count thinks, "The Rioja? Now there was a wine that would clash with the stew as Achilles clashed with Hector. It would slay the dish with a blow to the head and drag it behind its chariot until it tested the fortitude of every man in Troy ..." and so on.

Russia and all of its sufferings seems incidental to the plot — the book could have taken place in a grand hotel in Paris or London or New York just as easily. When the outside world makes itself felt, it's usually as an excuse for a charming caper of some kind: One episode has the Count, the chef, and the maitre d' conspire to scrounge the ingredients for a perfect bouillabaisse from war-depleted Moscow. After three years of plotting, they pull it off, and "with the very first spoonful one finds oneself transported to the port of Marseille — where the streets teem with sailors, thieves, and madonnas, with sunlight and summer, with languages and life."

All of the verbal excess, the gently funny mock-epic digressions, the small capers and cast of colorful characters, add up to something undeniably mannered but also undeniably pleasant. A Gentleman in Moscow is like a quipping, suavely charming dinner companion that you are also a little relieved to escape at the end of the meal.