Accessibility links
Better Sit Down For This One: An Exciting Book About The History Of Chairs OK, fine ... this new chair anthology might not keep you on the edge of your seat, but it does reveal some very interesting ideas about trends in design, culture and social values. 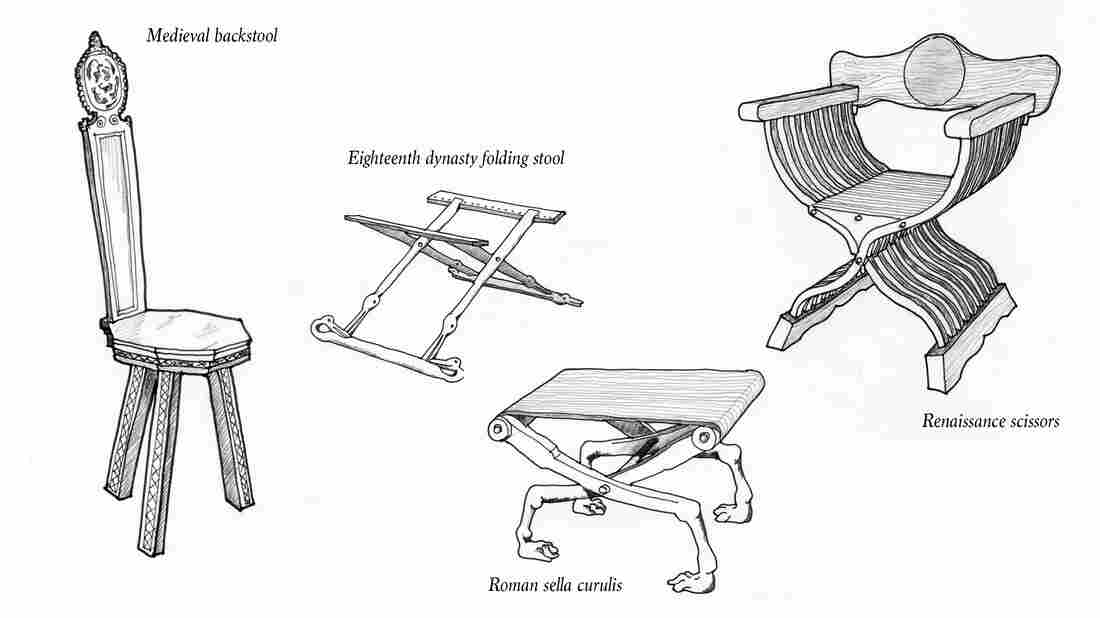 In his book Now I Sit Me Down, architect Witold Rybczynski explores centuries of chair design; look no further than right underneath you for interesting trends in design, culture and social values. Witold Rybczynski hide caption 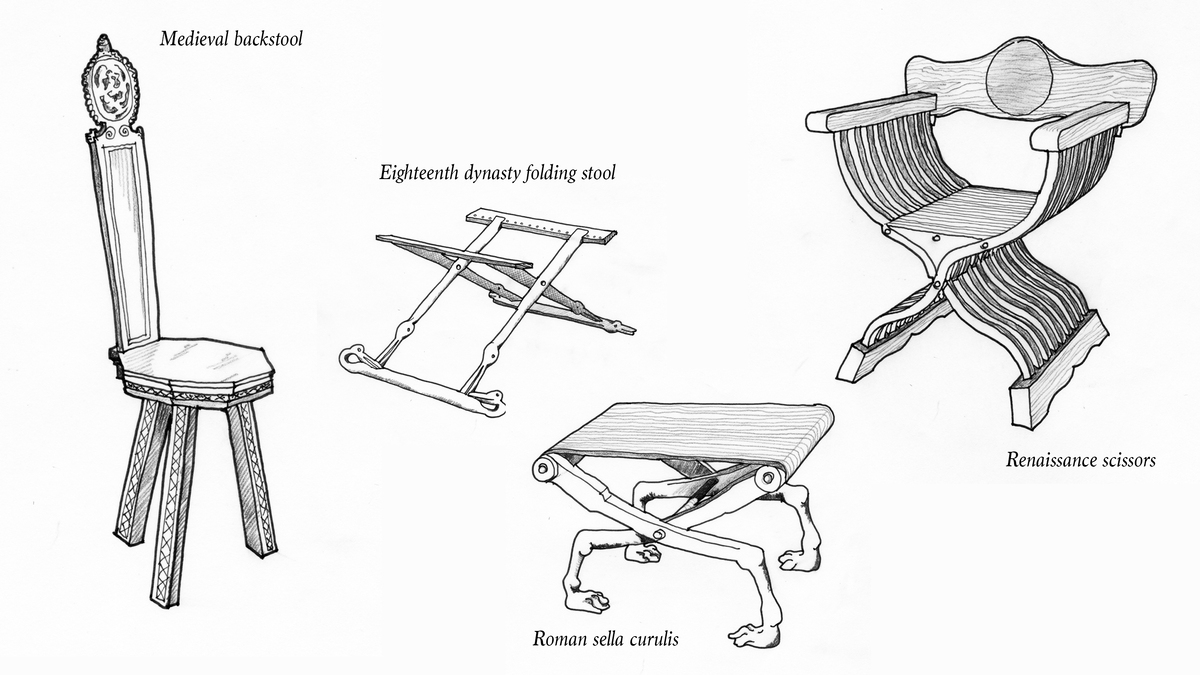 In his book Now I Sit Me Down, architect Witold Rybczynski explores centuries of chair design; look no further than right underneath you for interesting trends in design, culture and social values.

Please, have a seat; it's time to talk about chairs.

Thomas Jefferson collected chairs. Pee Wee Herman named his 'Chairy.' Archie Bunker's beloved wingback is now at The National Museum of American History. And when the Dowager Countess of Downton Abbey sat on a swivel chair for the first time, she was in for a surprise.

Now I Sit Me Down

From Klismos to Plastic Chair: A Natural History

Title
Now I Sit Me Down
Subtitle
From Klismos to Plastic Chair: A Natural History
Author
Witold Rybczynski

In the new book Now I Sit Me Down architect Witold Rybczynski traces the history of chairs. Take a close look at what you're sitting on, he says, and you'll learn about trends in architecture, design, culture and society.

When Rybczynski sits down to write, it's in an old, wooden swivel chair he bought at a flea market 40-some years ago. It reclines, it tilts, and it's well-worn. "This isn't just me," he says. "This is also whoever owned it before me. The wear and tear is kind of nice in an old chair."

Chairs are old — really old. But when exactly did humans decide the ground wasn't good enough? The oldest kind of chair, Rybcynski believes, was probably a folding chair — think of the nomadic tribes in ancient China, for example. "There are lots of occasions where you want to walk somewhere and then you want to sit," Rybczynski says. Who knew your beach chair had such a backstory? 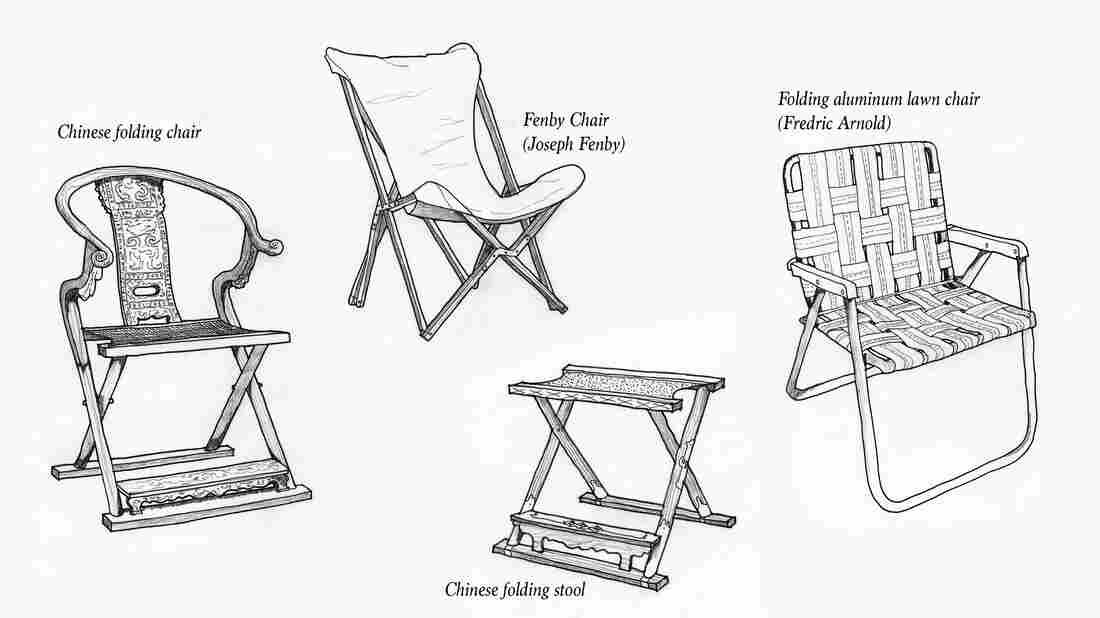 Rybczynski believes the oldest kind of chair was not a throne, but a folding chair. Witold Rybczynski hide caption 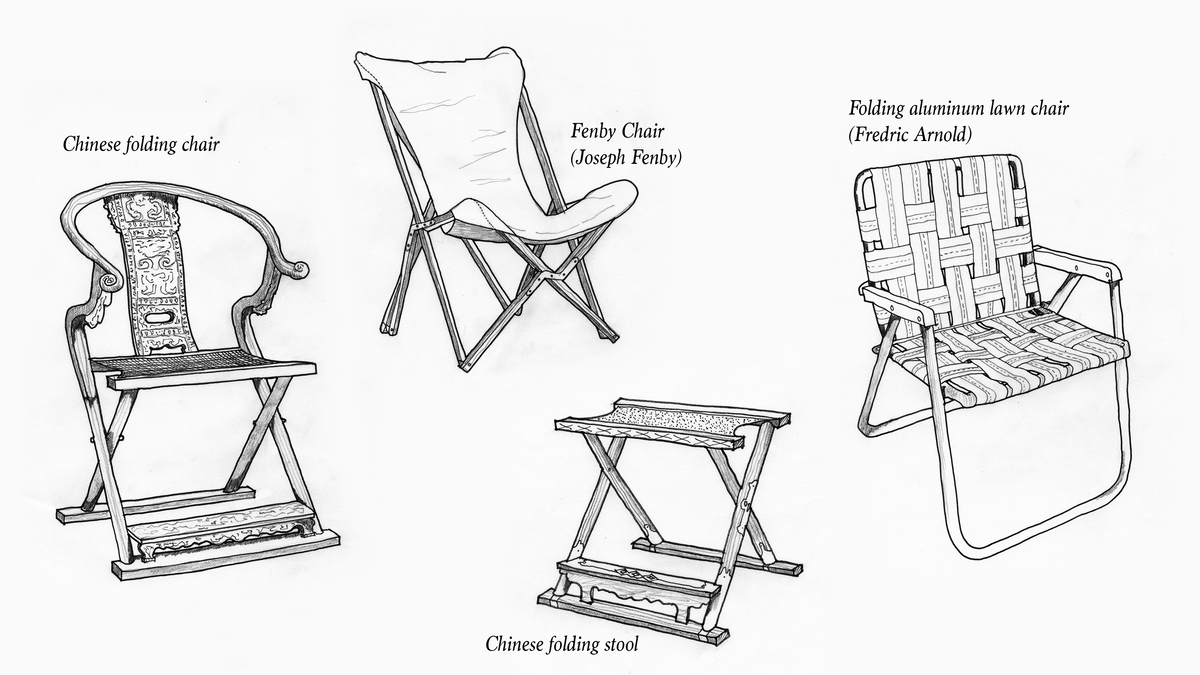 Rybczynski believes the oldest kind of chair was not a throne, but a folding chair.

The earliest records of chairs appear in Egyptian tomb paintings and ancient Greek art. The oldest representation Rybczynski could find is a Greek sculpture from 3,000 B.C., which is now in the Metropolitan Museum of Art. (You can see it right here.) It shows a harpist sitting on a simple, four-legged chair. "We would call it a kitchen chair," says Rybczynski.

"The striking thing about the Greeks," Rybczynski explains, "is that the chairs become very democratic very quickly."

Just take a look at the pictures — "there are women in chairs, gods in chairs, musicians — so it clearly was a tool used by many people," he says.

But democratic sitting didn't last. Fast forward to Europe in the Middle Ages and most people didn't get chairs at all. "They just sat on whatever was around because they couldn't afford it," Rybczynski says. "You had to be really rich to afford something like a chair. If they were lucky they sat on a bench — that was about the height of sitting." 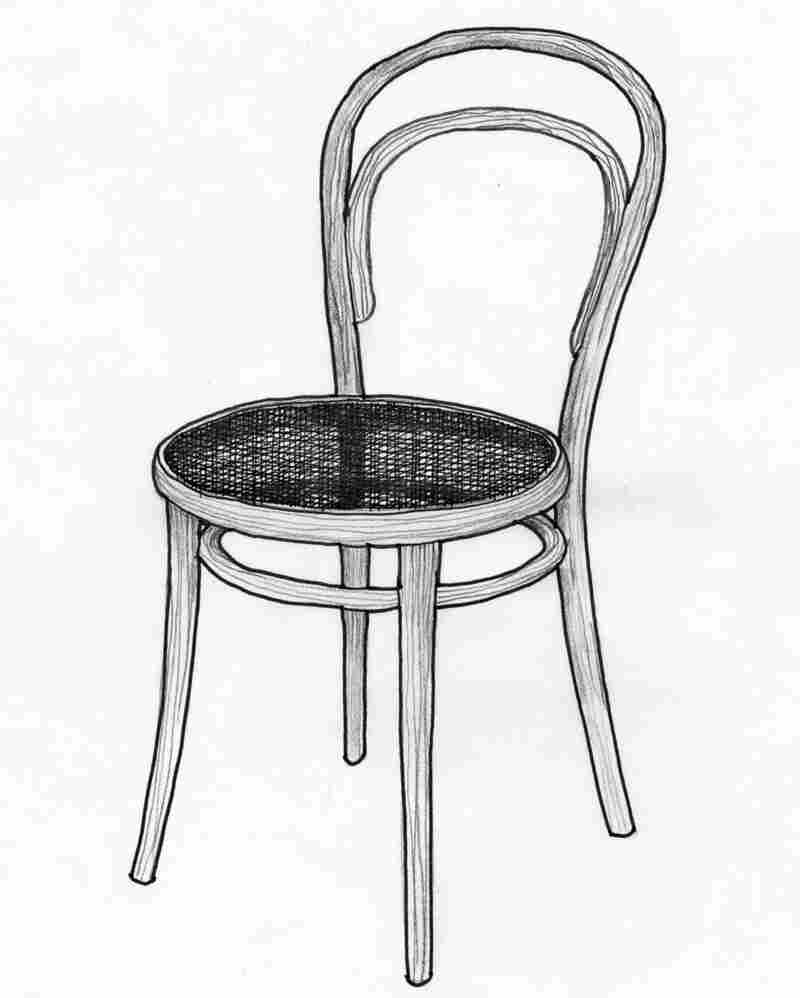 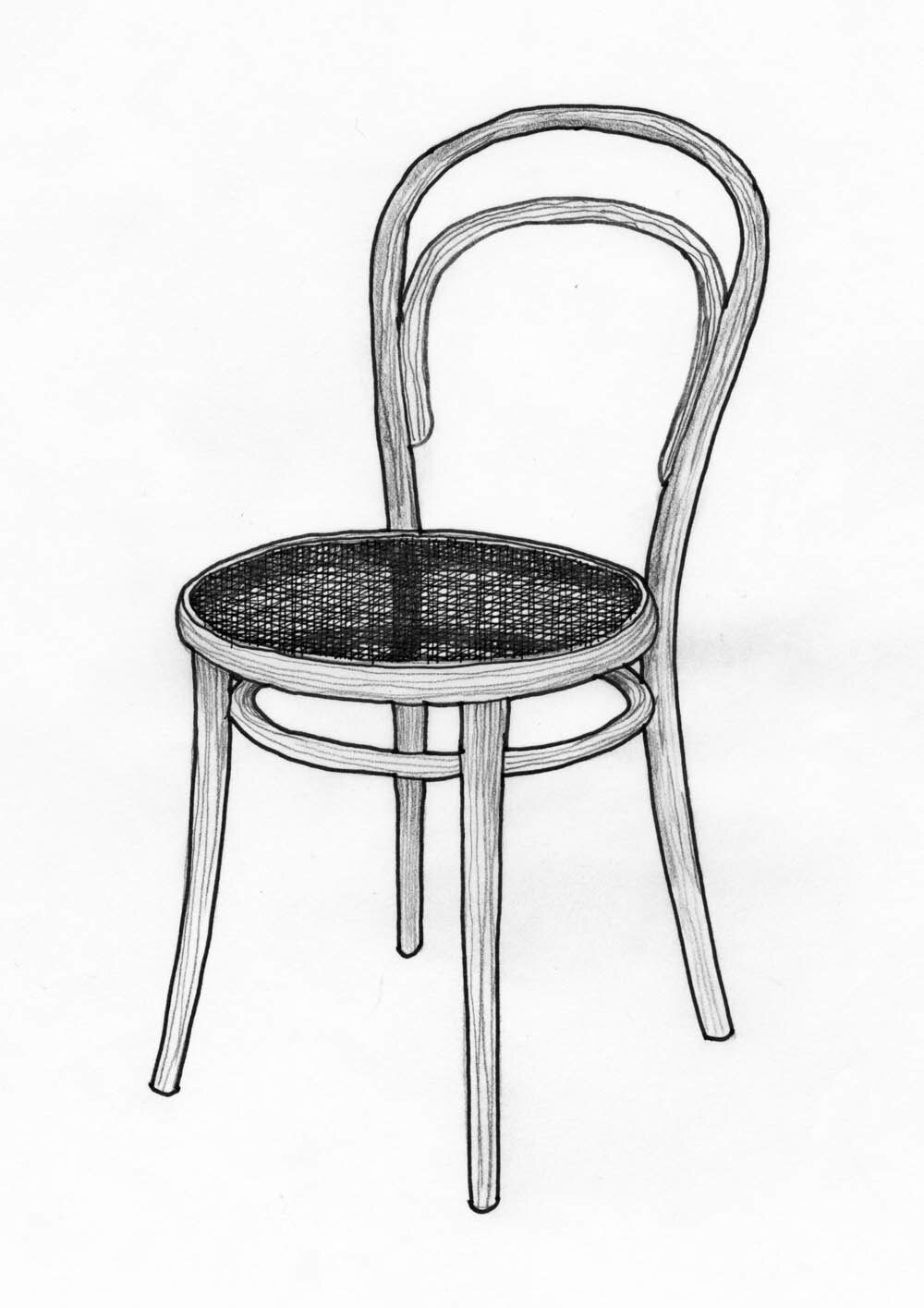 Michael Thonet , the German-Austrian furniture maker who made this cafe chair, also simplified the process of bending wood.

A chair's body has just a handful of parts: Legs, sometimes arms, a seat and a back. It may sound simple, but it's not. "They're like little buildings, in a way, because they have to be beautiful but they have to be practical," Rybczynski says. "They actually have to be very structurally sound."

In his book, Rybczynski writes of the many different architects and designers who've helped shape the history of the chair. In the 1830s German-Austrian furniture maker Michael Thonet invented the Vienna chair — you've probably seen those at coffee shops and cafes. Thonet simplified the process of bending wood, Rybczynski said, and turned the craft of chair-making into an industry.

He also celebrates the work of husband and wife team Charles and Ray Eames who began designing chairs in the 1940s. They designed shiny, smooth shells made of wood or a kind of plastic used in the linings of army helmets. "The object was to take a material which was a high performance material developed during the war, and try to make it available to householders at non-military prices," Eames explained in a 1956 NBC interview.

The Eames revolutionized chair production. From airports to offices, they came up with designs that were innovative and lent themselves to mass production. "They moved furniture from the traditional appearance to something very modern," says Rybczynski. Using materials like metal and plywood, they created chairs that remain popular today. 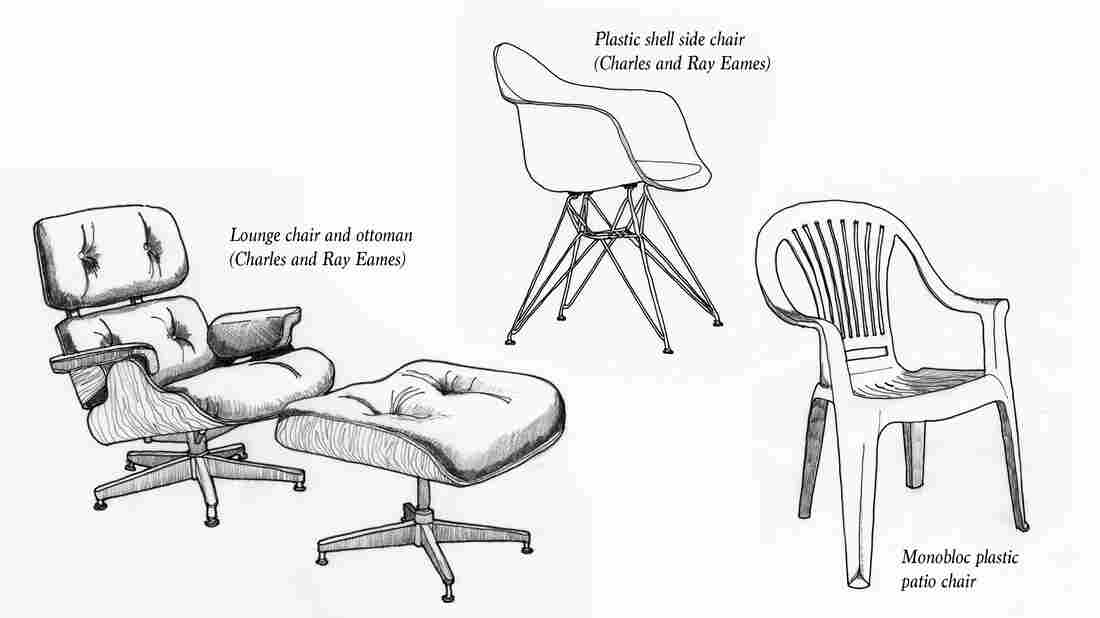 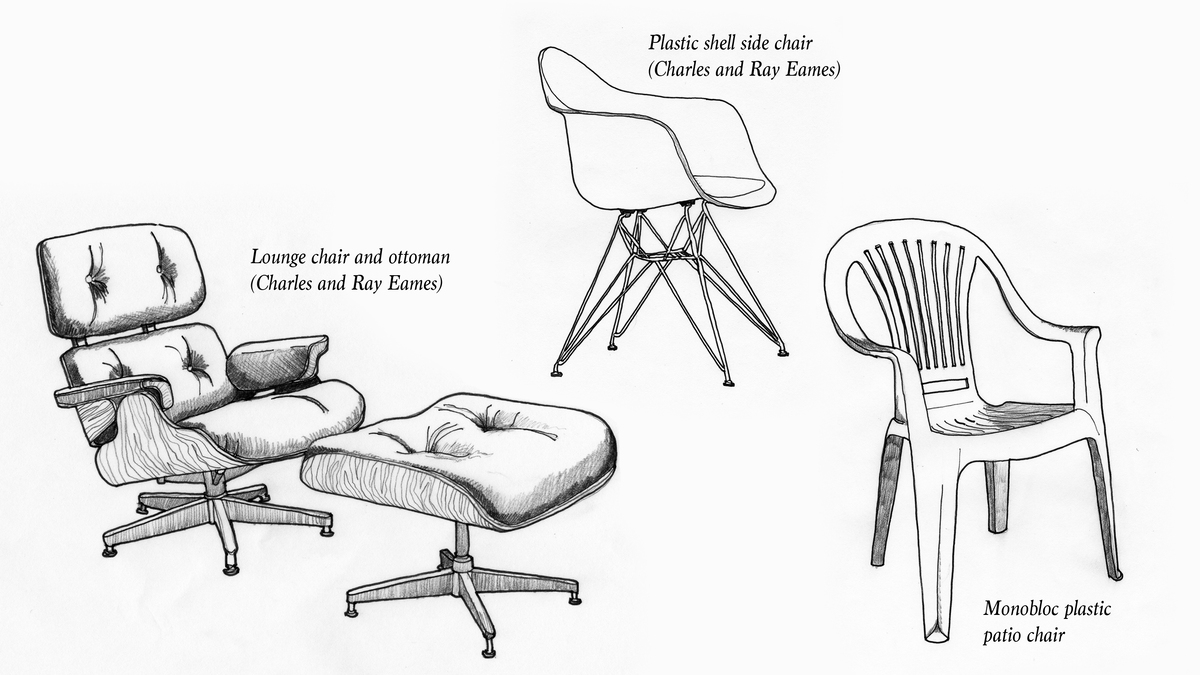 The "ultimate descendant" of the Eames shell chair is the one-piece, plastic chair — yes, those cheap, stack-able, patio chairs. They may not be pretty, but they solved a huge structural problem. "The challenge for chairs was always the joint," Rybczynski says. "Because, when you sit in a chair, the joints move and eventually they get loose and the chair starts to get wobbly. The plastic chair is one piece, so it gets rid of the joints."

A Book About Bookshelves To Put On Your Very Own Bookshelf

Plastic chairs can be pretty indestructible. Designer Andrew Morrison notes that TV footage often shows intact plastic chairs strewn about in the aftermath of bombings. "Wooden chairs would never survive the blast, they'd be splintered to pieces," he says.

The ubiquity of the plastic chair (there's an entire website devoted to that subject) is all thanks to the "monobloc" mold, Rybczynski explains. "The whole process, from pellets to completed chair, takes less than a minute," he writes. "Since the raw material is relatively inexpensive, the production cost is extremely low."

The plastic chair may be just the latest chapter in the long and enduring history of chair evolution. After all, Rybczynski points out: "The problem of sitting is universal."

In addition to Witold Rybczynski's Now I Sit Me Down, here are a couple more books in the chair genre you might want to check out:

1000 Chairs by Charlotte and Peter Fiell
From Eero Saarinen to Frank Lloyd Wright, this is an encyclopedia of chair design with stunning but compact images of every style imaginable. Each chair gets a page with brief descriptions of its history, materials, importance and/or creator's intent. The Fiells have written a number of books on design, including a follow-up to 1000 Chairs called Chairs: 1,000 Masterpieces of Modern Design, 1800 to the Present Day.

And for the young chair enthusiast in your life:

Down the Back of the Chair by Margaret Mahy and Polly Dunbar
If you've ever lifted up a chair cushion and found keys, pencils, coins or other missing valuables, you'll relate to the delightfully ridiculous treasures one family finds in Down the Back of the Chair, originally a poem by New Zealand author Margaret Mahy. Polly Dunbar's colorful illustrations are the perfect match for Mahy's wacky sense of humor.

Peter's Chair by Ezra Jack Keats
If you can forgive the old-school blue-for-boys/pink-for-girls color themes in this 1967 classic, this is a very sweet story about how we grow into new chairs as we get older — and how to make room for new, smaller members of the family, who will want to sit beside you.

Pablo & His Chair by Delphine Perret
Pablo is disappointed when his grandmother gives him a chair for his birthday. But, with the power of his imagination, his chair becomes his ticket to tour the world on an acrobatic adventure. When he returns home, Pablo's chair is waiting for him at the table, where his family gathers to hear him tell his tale.