Accessibility links
How Fossil Fuel Production Relates To Earthquakes An earthquake with a magnitude of 5.6 hit Oklahoma on Saturday morning. StateImpact Oklahoma reporter Joe Wertz talks about earthquakes and their connections to oil and gas production.

An earthquake with a magnitude of 5.6 hit Oklahoma on Saturday morning. StateImpact Oklahoma reporter Joe Wertz talks about earthquakes and their connections to oil and gas production.

An earthquake rattled northern Oklahoma early Saturday morning with a magnitude 5.6, one of the strongest in the state's history. So far no fatalities have been reported, but people felt the quake as far away as St. Louis, Mo., Dallas, Texas, and even Memphis, Tenn. Now, Oklahoma has experienced a number of earthquakes this year, some of which have been linked to the underground disposal of wastewater from oil and natural gas production. To find out more, we called Joe Wertz. He's a reporter with StateImpact Oklahoma, and he's covering this story. Hi, Joe.

JOE WERTZ: Hey, how are you doing?

MARTIN: Good. So you spent some time in Pawnee, Okla., about eight miles from the epicenter. What did you see there?

WERTZ: I saw and talked to a lot of worried residents, people with a lot of damage inside and outside their homes, brick facades, sheering off buildings in downtown Pawnee. Inside people's homes lots of things broken - shelves broken on walls, cracked chimneys. I talked to one resident - Dave Denney. He lives in a trailer home, and his whole home had shifted off the foundation and crumbled some of the supporting blocks underneath.

DAVE DENNEY: Yeah, I've got busted blocks underneath. I wouldn't know how far, but it did bust my line. That's what I seen right there, the sewer line coming out.

DENNEY: That's where I seen that something happened more than what I thought happened.

WERTZ: So they were out there trying to make emergency repairs to that sewer line, wrapping some tape around it, trying to get it - a makeshift sewer line working until they could get somebody out to make a permanent repair.

MARTIN: Now, this isn't the first large earthquake that we've seen in Oklahoma. There was a magnitude 5 quake back in February. And there was another one in 2011. Now, we talked to Daniel McNamara. He's a researcher at the U.S. Geological Survey. And he told us...

DANIEL MCNAMARA: A number of these earthquakes have been linked to oil and gas wastewater disposal. This one that occurred today - we can't say yet if it's directly related to wastewater injection, but it looks very similar to events that have been linked.

MARTIN: Now, Joe, you've reported on this a fair amount yourself. Can you tell us about the impact of oil and gas wastewater on quakes? And to be absolutely clear, we're not just talking about fracking here, correct?

WERTZ: Right. In Oklahoma, the wells produce a lot of water that comes up with the oil and gas, and you have to filter that often and do something with that toxic water. You pump it back underground. And that's what's thought to be causing most of the shaking. We're up to more than a dozen peer-reviewed scientific research papers that have made the connection. A chorus of scientists seem to think that's what's causing the shaking.

MARTIN: So I understand that government officials in Oklahoma have started to acknowledge the role of wastewater disposal in the recent earthquakes, but that's a bit of a complicated conversation there. So can you talk us through the politics of this?

MARTIN: Before we let you go, any sense of where public opinion is about this?

WERTZ: Yeah, well, people who are experiencing the shaking, they're worried, and they want it to stop. And I think, at least in my interviews with people, who have maybe expressed reluctance to connect the oil industry, at least initially, have come around because the scientific evidence has been so persistent and has really built.

Earthquake Rattles Oklahoma; One Of Strongest Recorded In State 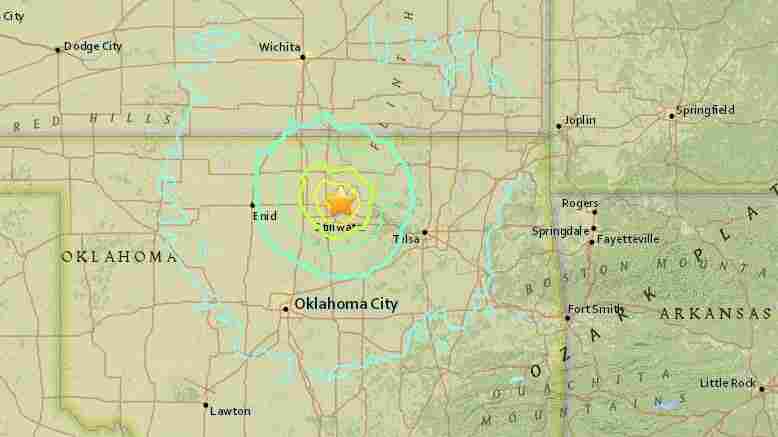 A map shows the recorded location of a strong earthquake that struck west of Tulsa Saturday morning. USGS hide caption 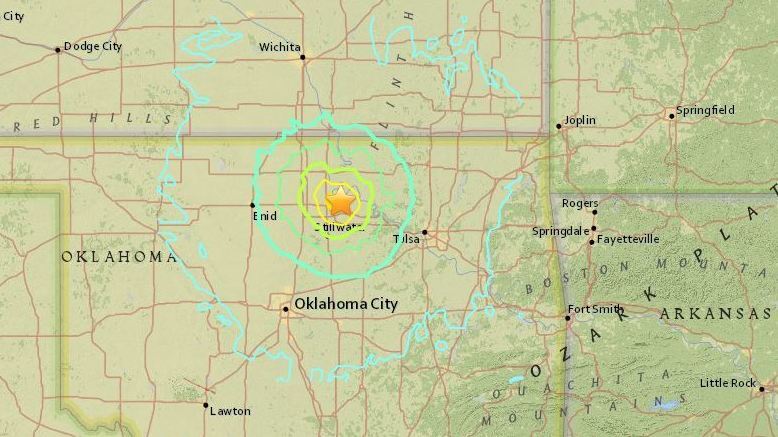 A map shows the recorded location of a strong earthquake that struck west of Tulsa Saturday morning.

An earthquake struck northern Oklahoma early Saturday morning, rattling houses and waking residents in the region around Pawnee, about 74 miles north of Oklahoma City. Preliminary measurements show the quake had a magnitude of 5.6 — believed to be one of the strongest in state history.

The quake was felt in five states, according to the U.S. Geological Survey: Oklahoma, Kansas, Missouri, Arkansas and Texas. It struck just after 7 a.m. local time, at a depth of 6 kilometers (3.7 miles).

The epicenter was around 8 miles northwest of Pawnee, a town of less than 3,000 people. Shortly after the large quake hit, at least four additional temblors struck the same area, with the strongest having a magnitude of 3.6; all of them were shallower than the first quake.

According to the National Weather Service's Tulsa office, the earthquake ties the strongest quake in Oklahoma history at 5.6 magnitude. The previous record breaker hit on Nov. 5, 2011, the agency says.

Public Radio Tulsa — where the quake was strongly felt — describes the scene:

"Police in Pawnee report some windows were broken and homes sustained damage to the the outside facade. There have been no reports of injuries.

"The quake struck just after 7 a.m on Saturday morning. It was nearly four miles deep.

"Social media was alive with people feeling the quake from Dallas to Springfield, Missouri. The quake was so strong in Joplin, people there were worried it was the New Madrid Fault in far eastern Missouri, the site of the United State's strongest earthquake ever in 1812."

A number of smaller earthquakes have hit northern Oklahoma in the past week — including one that struck the same area as today's quake on Thursday, with a 3.2 magnitude. Since last Saturday, a string of similar quakes have hit an area west of Pawnee, including at least eight with a magnitude of 3 or higher.

In Oklahoma and other regions that are experiencing a spike in earthquakes, a consensus has emerged that they're linked to the underground injection of wastewater that's generated from fracking in oil and gas production, as Public Radio Tulsa recently reported.

The station says the Oklahoma Geological Survey is now working on a six-month study of injection wells to get a grip on how to cut the chances that operations "inadvertently induce a seismic event," as an oil industry representative said last month.

More from the USGS:

"Locations across the central and eastern United States (CEUS) have been experiencing a rapid increase in the number of induced earthquakes over the past 7 years. Since 2009 rates in some areas, such as Oklahoma, have increased by more than an order of magnitude. Scientific studies have linked the majority of this increased activity to wastewater injection in deep disposal wells in several locations. However, other mechanisms such as fluid withdrawal, enhanced oil recovery, or hydraulic fracturing processes can also result in induced earthquakes."