Accessibility links
Our Language Has 'Interesting Little Wrinkles,' Linguist Says John McWhorter of Columbia University says the way we use words changes, like how "literally" can now mean "figuratively." That example, he says, is a contronym, a word with two opposite meanings.

The meaning of words, and the way we used them, change all the time — and that's OK with linguist John McWhorter of Columbia University. He writes about how the English language has evolved in his new book, Words on the Move: Why English Won't — And Can't — Sit Still (Like Literally).

McWhorter says that there's "a very understandable sense that language is supposed to stay the same except there'll be new words for new things — you have to call a fax machine something — and then maybe some words will come in from other languages such as sushi and then there will be slang," he tells NPR's Renee Montagne. "But it's less obvious that the very meanings of words and how we put them together are always ooching along, such that the language we speak now is on its way to becoming another language." 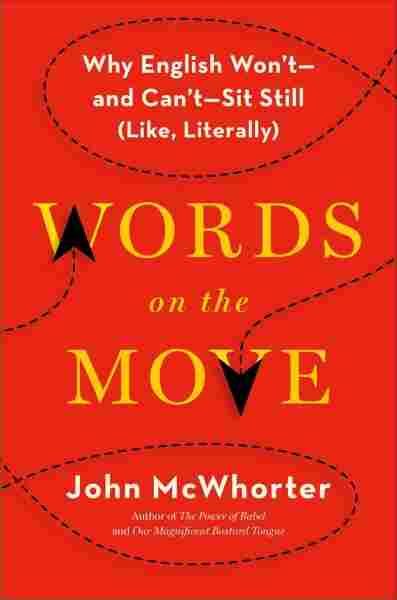 Words on the Move

Why English Won't - and Can't - Sit Still (Like, Literally)

How the word "literally" has changed

Originally literally meant "by the letter," and we kind of like the idea that that's what it would always be used to mean. But over time, instead of meaning "by the letter," what people really just meant was "really." And so now, literally doesn't have that "by the letter" meaning; it's something that people use to figuratively reinforce. So that means that we have this word that you can say means both one thing and then its opposite — and that seems to really get up people's nose, and I can see how that would seem frustrating because it can seem unusual — but the thing is, it isn't.

It's something called a contronym. And so, for example, you can seed a watermelon, and everyone knows that that does not mean that you are laboriously putting the seeds into it — you're taking them out. But then you can seed something by putting a seed in the ground and watching something green come up.

Contronyms, let's face it, are neat. We should rejoice that our language has interesting little wrinkles as long as they don't interfere with comprehension.

Another example of a word that's morphed over the years

Silly. Silly starts out meaning blessed. But all of these implications happen to the word over time. If you're blessed, than one could assume that you're probably innocent. So it starts to mean innocent. But if you're innocent, then you could be seen as possibly a little naïve, as kind of weak. Well, if you're kind of weak — and there comes a point when that's the main meaning of it — it could be that you have a weak mind. If you're weak-minded, then you might be a bit of a boob. And so the next thing you know, silly has come from meaning something where you have an amen chord, to being Soupy Sales!

On how language has drifted

It's a lot of why Shakespearean language can be so difficult to understand when delivered live — because a lot of those words are words we're completely familiar with, but doesn't seem to quite make sense often, because they're using the words at a different stage of the ooching then they happen to be in our time....

Somebody will say "wit" and it means knowledge, it doesn't mean Noel Coward and champagne — and so we're hearing it differently. Or somebody will say "generous" and you're thinking, "well, what does magnanimity have to do with what this person is saying?" There's a speech that Edmund does in King Lear that I'm thinking of with this.

And really, it's not that he's saying he's generous, it's he's saying that he's noble. That's what the word originally meant. Now, if you're a noble, one aspect of it might be that you are generous with your goods, that you give things to the public. After a while, generous came to mean magnanimous and we use noble to mean what Shakespeare could use generous to mean. If we could go back to Elizabethan streets, we would be able to get around — but we'd have a headache. People would have a hard time completely getting us, and we would have a hard time completely getting them.