Accessibility links
A U.S. Marine Tried To Warn A Comrade, Now He Faces A Discharge Marine reservist Jason Brezler warned comrades in Afghanistan about a dirty Afghan cop. No one took heed, and three Marines died. Now Brezler is facing a possible discharge from the Corps. 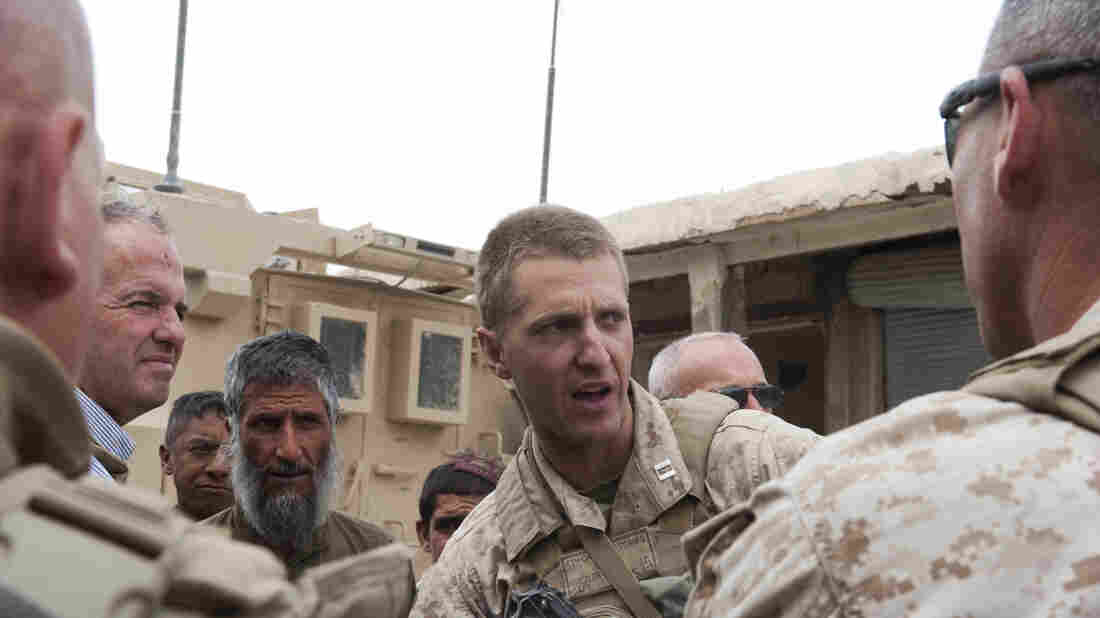 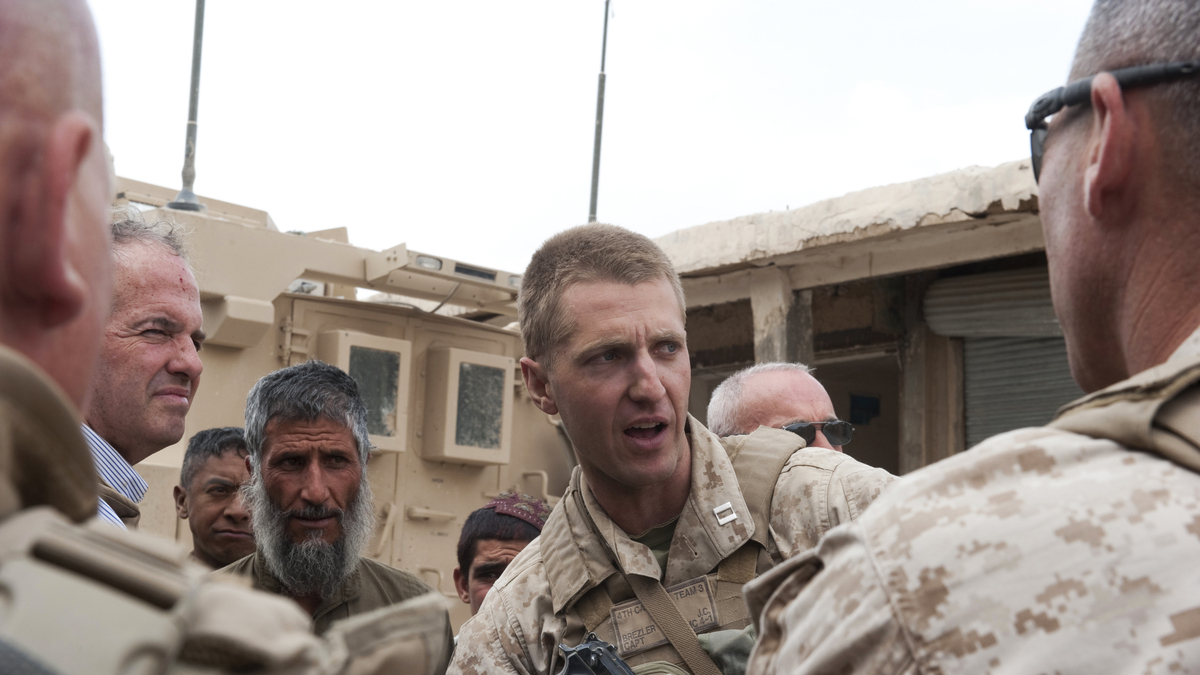 Jason Brezler in the market of Nowzad on May 7, 2010, with village elders, Afghan National Police and U.S. Marines. Maj. Brezler is now facing a possible discharge from the Marines after he emailed classified documents.

Four years ago, Jason Brezler sent an urgent message to a fellow Marine in Afghanistan, warning him about a threat. The warning wasn't heeded, and two weeks later, three U.S. troops were dead.

Now the Marine Corps is trying to kick out Maj. Brezler because the warning used classified information.

Jason Brezler never thought he'd make a career out of the Marine Corps — his family history was FDNY.

Brezler graduated from the Naval Academy just before Sept. 11, 2001, and deployed twice as a Marine officer. Then he went into the reserves in 2005, and took a job as a rookie firefighter in the Bronx. The Iraq war was burning too, though, and the Marines kept calling for volunteers.

"I had an opportunity to go to Fallujah at the height of the insurgency, came home and said, what the heck, decided to go to Afghanistan," he says.

In 2010 he was at a remote base in Helmand. The mission was to support the local Afghan population against the Taliban. To do that, Brezler found, he also had to help them against corrupt officials of their own government.

"The police in many cases was a destabilizing force — and driving more folks into the arms of the Taliban," Brezler says.

In particular, the local police chief, Sarwar Jan, turned into a problem.

"Sarwar Jan, he was a threat to not only the Afghans but our own Marines," Brezler says.

The chief was maybe linked to the Taliban. He was also alleged to be a pedophile who preyed on local boys — something alarmingly common among Afghan warlords.

Recently there's been a debate about whether U.S. forces should tolerate Afghan allies who keep kids at their barracks. Back in 2010, there was no policy. Brezler couldn't fire Sarwar Jan, but he could kick him off the base.

"We put Sarwar Jan on the next helicopter. And, once he left, we could have probably had a parade the next day through the bazaar. The Afghans were absolutely elated," he says.

Brezler went home. In the summer of 2012 he was still in the Marine Reserves, and working as a Brooklyn firefighter. On the side he was getting a master's degree.

It was a forwarded request for information from a Marine in Helmand. Sarwar Jan was living on a U.S. base again. He'd brought a small group of underage Afghan boys to serve him there.

"My reaction was largely a visceral one. I was like, 'Are you freaking kidding me?' " he says.

Brezler searched his laptop — it was the same one he'd had with him in Helmand — and found the dossier on Sarwar Jan. He attached it, hitting "reply all" and then "send." That set off a chain of consequences, including one Brezler never intended, according to his lawyer, Mike Bowe.

"As soon as he sends it, the Marine on the other side says, 'This is marked classified,' " Bowe says. "So, at the first break during class, [Brezler] calls on his cellphone to his [commanding officer] and he says, 'Look, this is what just happened,' " says Bowe, "so he self-reports right away like he's supposed to do."

Brezler told his commander he had emailed a classified document from a non-secure Yahoo account. His commander, who had served with Brezler in Fallujah, told him to notify their intelligence officer but not worry too much about it.

"He said all right, it sounds like minor spillage," Brezler recalls.

Over the next several months, NCIS (Naval Criminal Investigative Service — because the Marine Corps is technically part of the Navy) would investigate the "spillage" and find that Brezler had classified materiel still on his laptop from his deployment. That would result in a bad fitness report on Brezler's otherwise excellent record of awards and citations.

More immediately, though, the urgent warning he had sent got lost in the concern over spillage.

"What we didn't want to happen"

On Aug. 10, 2012, just 17 days after Brezler's warning, one of Sarwar Jan's underage servants grabbed an assault rifle and killed three unarmed Marines at the base gymnasium in Helmand.

"I don't know if I've ever been so angry and so sad at the same moment in my life. This is precisely what we didn't want to happen," Brezler says.

Brezler felt worse a few months later when he heard that the parents of one of the murdered Marines had no details about their son's death. They were asking for help from their congressman, New York Republican Pete King.

"It was at that point that I said to myself, 'This isn't OK.' That family, they probably don't really know this attack was in the preventable range," he says.

Brezler met with Rep. King, and the congressman started pushing the issue in the media.

And that's when the U.S. Marine Corps got serious — about investigating Jason Brezler.

"Almost a year had gone by from the time, he had moved on, the Marine Corps had moved on," says lawyer Mike Bowe. "A news story comes out that reveals that he's talking to Congressman King about these murders, and three days later he is sent to a Board of Inquiry to be kicked out of the Marine Corps."

The inquiry was retaliation, Bowe says, for embarrassing the Marine Corps brass. He says there were hundreds of similar cases of "spillage" the same year, and only two were punished. A Pentagon inspector general's report concluded it was not retaliation.

After three days of testimony, the board decided Brezler should be put out of the Marine Corps, with an honorable discharge. He wouldn't lose any benefits or rank; Jason Brezler just wouldn't be a Marine anymore.

"In light of my very strong desire to continue to serve and lead Marines, it didn't feel honorable," he says.

Brezler is suing in federal court to stay in the Marines.

A spokeswoman said the Marine Corps has confidence in the legal and administrative processes against Brezler, but declined to comment further because the case is ongoing.

A federal judge put a stay on his dismissal from the Marines until a hearing, and possibly a trial, this fall.

Brezler's case has become celebrated among some troops and veterans. Internet memes compare his treatment to that of Hillary Clinton, who sent some 110 classified emails from her personal server; or to that of Gen. David Petraeus, who lied to the FBI about giving classified material to his mistress. A prominent retired Marine general even invited Brezler to a Marine Corps parade this summer in a gesture of support.

"There's a lot of really great Marines that, throughout this ordeal, have continued to stand to my left and to my right," Brezler says.