Accessibility links
Hillary Clinton Is Burying Donald Trump On TV In Battleground States The widening disparity that extends through Election Day worries Senate Republicans as they try to hold on to a fragile majority. 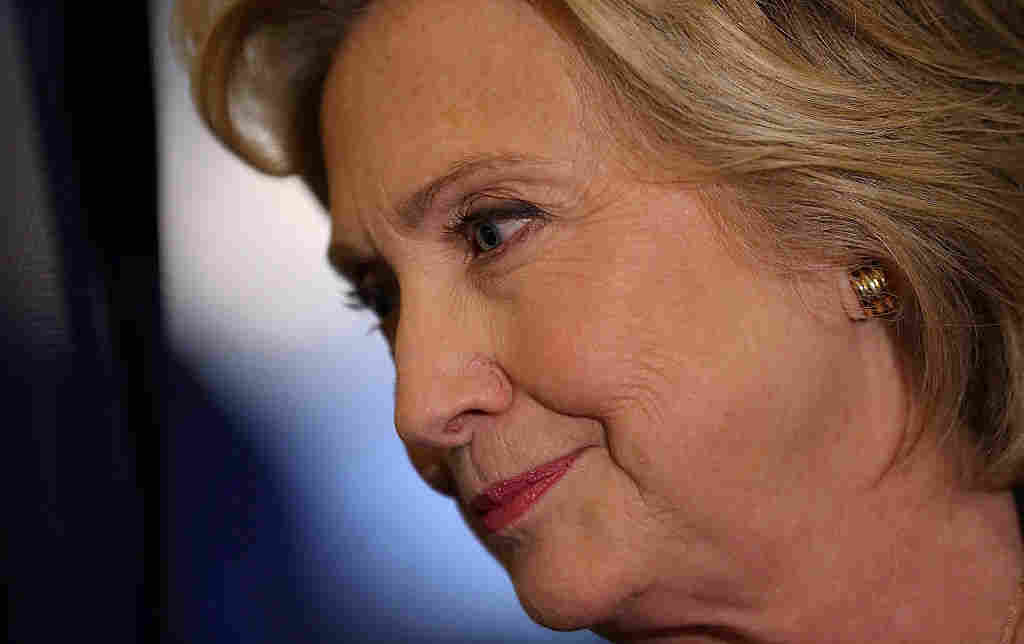 Democratic presidential nominee Hillary Clinton is on pace to outspend her GOP rival Donald Trump on the air in key battleground states by a 7-to-1 margin. Justin Sullivan/Getty Images hide caption 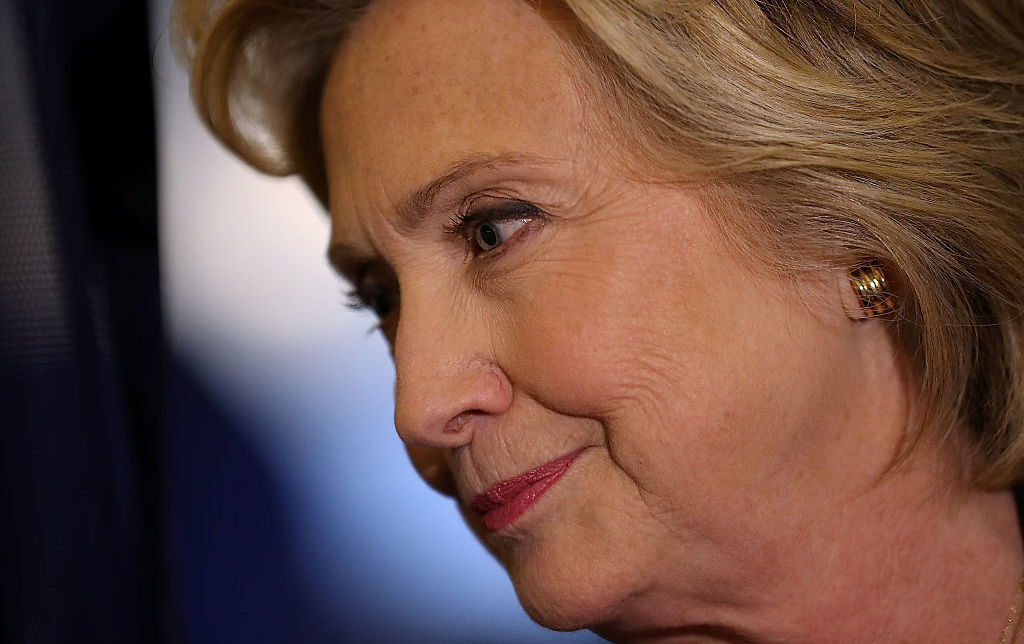 Democratic presidential nominee Hillary Clinton is on pace to outspend her GOP rival Donald Trump on the air in key battleground states by a 7-to-1 margin.

Hillary Clinton's campaign has built a massive spending advantage over Donald Trump in critical swing states heading into Election Day — a widening disparity that worries Republicans not just for the presidential race but also in the battle for the Senate. 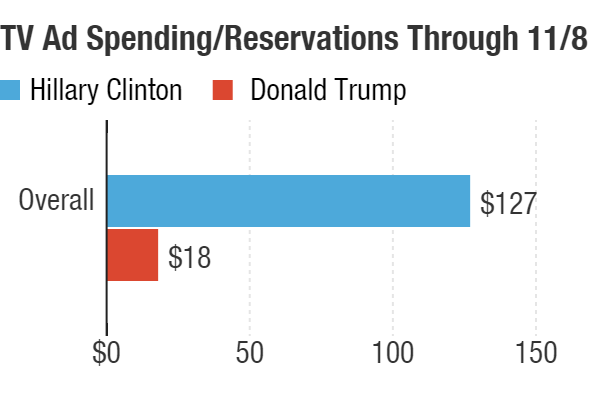 According to figures provided to NPR by a Republican source tracking ad buys, the GOP presidential nominee is on pace to be heavily outspent in seven presidential and Senate battlegrounds by $127 million to $18 million. Those numbers represent airtime already purchased or reserved from July 26 through Nov. 8. While these numbers could and likely will change, it's an ominous sign for Republicans already growing nervous about the drag Trump could have on down-ballot contests.

Recent polls show Trump trailing in nearly every swing state he needs to get an electoral college majority. And while some GOP Senate incumbents in those states are outperforming their party's nominee, strategists fear that if the gap continues to widen, their candidates will be swamped on air by November, even if they run strong campaigns independent of the top of the ticket. Already aided by a map that favored Democrats this cycle, the minority party only needs to flip five seats, or four if it wins the White House, to win back the majority lost two years ago.

These early ad reservations are critical for any campaign because they can lock in a lower rate by purchasing time in advance; closer to Election Day, the same amount of ad time will cost more. Clinton's campaign has made those investments as any traditional campaign would. But Trump, running a very nontraditional campaign, has not — and if he decides to later on, it would cost him much more to match what Clinton currently has on the airwaves, let alone catch up to the advantage she has built for months.

For example, in Pennsylvania, Clinton has reserved $22.6 million worth of ad time compared with just $2.5 million for Trump through the end of August — a 9-to-1 advantage for the Democrat. Clinton has opened up a polling lead in the Keystone State, as has Democratic Senate nominee Katie McGinty over GOP Sen. Pat Toomey. 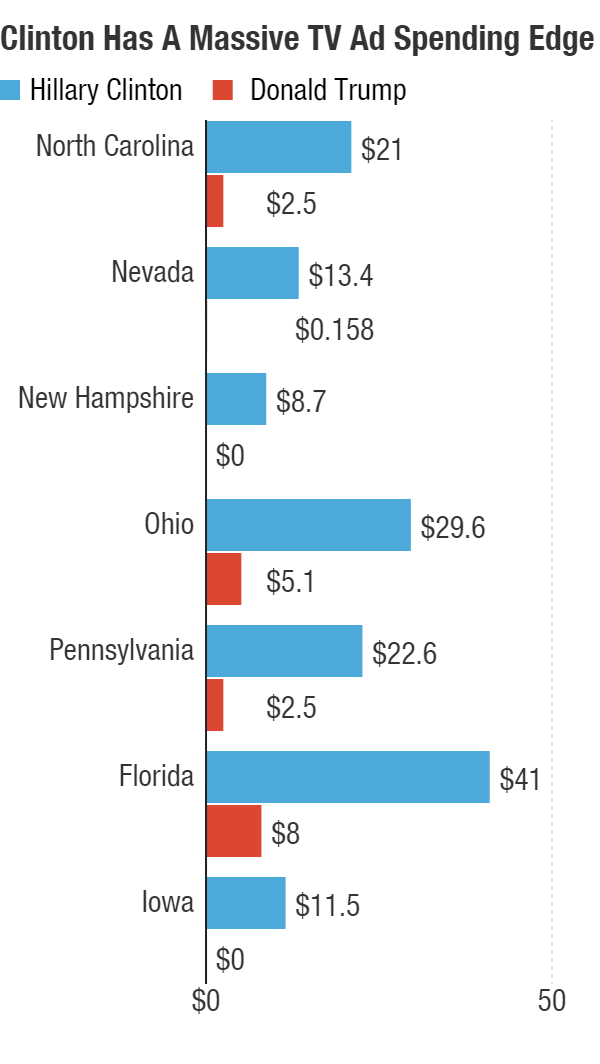 The above chart, in millions, shows Donald Trump is on pace to be vastly outspent in states critical to both his White House hopes and GOP hopes of keeping their slim Senate majority. This includes airtime already purchased or reserved from July 26 through Nov. 8. Domenico Montanaro/Republican ad tracking hide caption

In Ohio, Clinton has reserved $29.6 million to Trump's $5.1 million, a nearly 6-to-1 advantage. Polls are tighter in the Buckeye State, but most show Clinton up. Republican Sen. Rob Portman, however, is proving to be an exception this cycle even as Trump trails. Portman's early $13 million war chest helped him build a comfortable lead over his Democratic challenger, former Gov. Ted Strickland, and Democratic groups have begun canceling some of their planned ad buys.

GOP Sen. Marco Rubio, who unsuccessfully challenged Trump in the primary, is outperforming the Republican nominee in Florida, too. The TV ad time disparity between the two presidential candidates is the smallest in the Sunshine State, though Clinton still has a 5-to-1 on-air advantage.

In North Carolina — an increasingly worrisome Senate contest for national Republicans — Trump is being outspent by more than 8 to 1. The presidential polls are neck and neck in the Tar Heel State, and so is the race to unseat Sen. Richard Burr. The GOP incumbent set off alarm bells when he said in an interview last month he didn't really see himself as a candidate until October.

The most problematic state where Clinton's ad spending is dwarfing Trump is Nevada. Her campaign has set down a $13.4 million marker there, while his has reserved just $158,000 — that's a more than 84-to-1 advantage for the Democrat. Nevada is also the GOP's lone Senate pickup hope. The race to replace retiring Senate Minority Leader Harry Reid is a close one, and if Clinton widens her lead there, it could have quite an impact down-ballot.