Accessibility links
Despite Court Ruling, Voting Rights Fight Continues In North Carolina Voting rights advocates in the state say some Republicans are trying to sidestep a recent court decision and make it harder for African-Americans to vote. 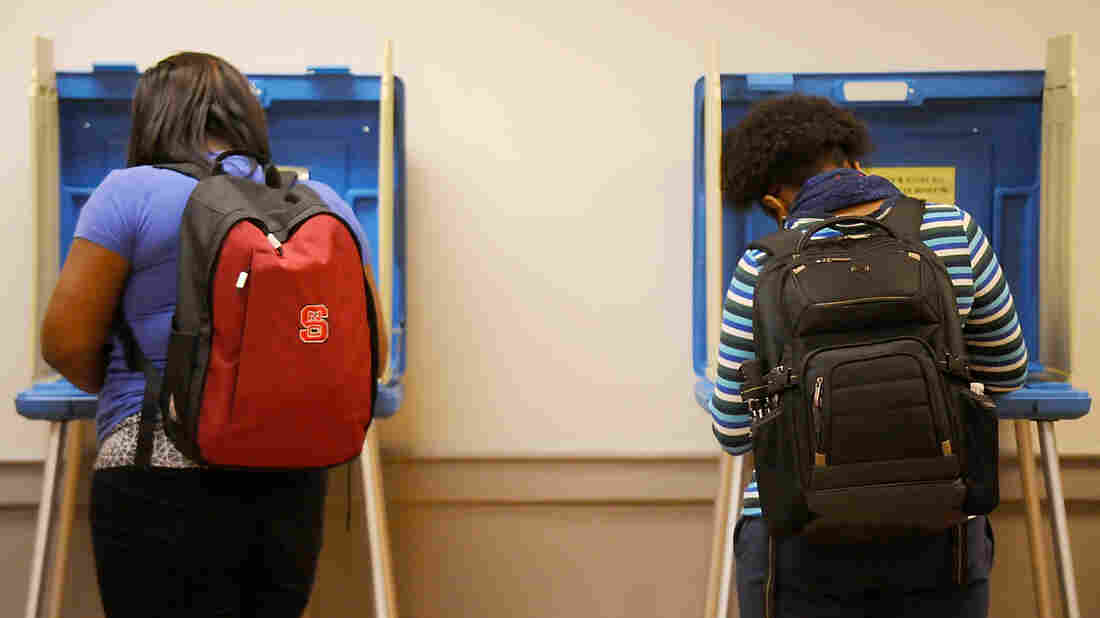 North Carolina State University students vote in the March 15 primary in Raleigh. The primary was the state's first use of its voter ID law. Sara D. Davis/Getty Images hide caption 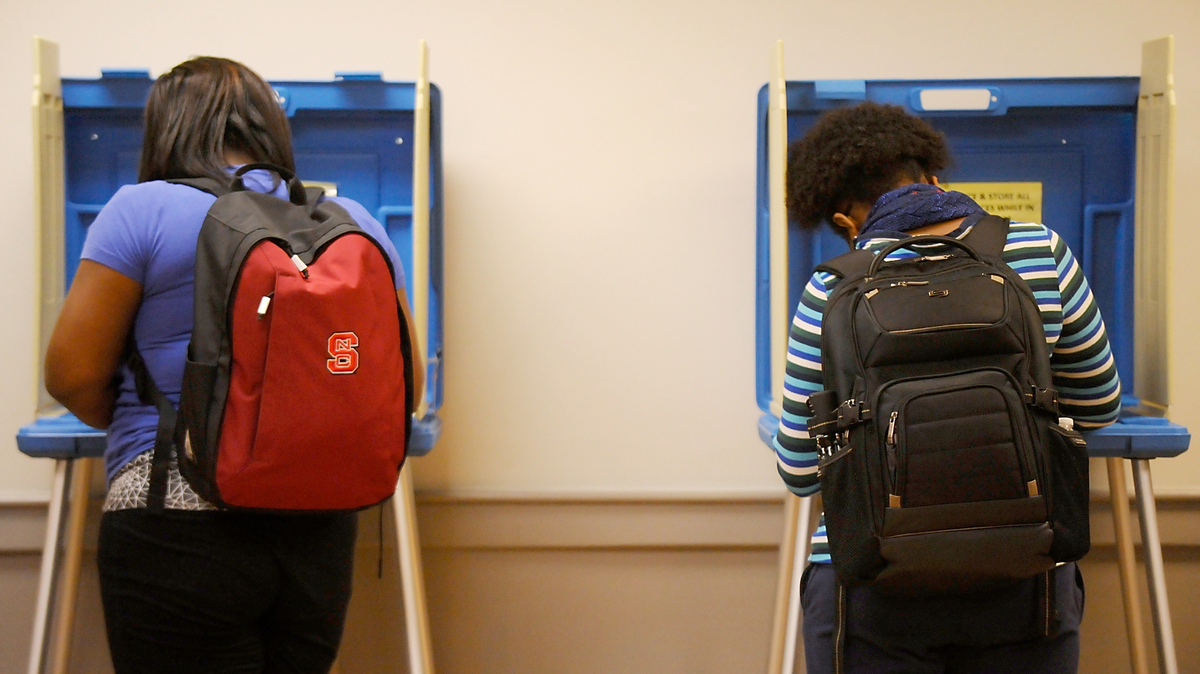 North Carolina State University students vote in the March 15 primary in Raleigh. The primary was the state's first use of its voter ID law.

In the swing state of North Carolina, a fight for early voting rights that seemed to end with a strongly worded federal court ruling last month, may be just getting started.

That fight began in 2013, when the state made cuts to early voting, created a photo ID requirement and eliminated same-day registration, out-of-precinct voting, and pre-registration of high school students.

In July of this year, the 4th U.S. Circuit Court of Appeals struck down major parts of the overhaul. The three-judge panel ruled those changes targeted African-Americans "with almost surgical precision."

Now, voting rights advocates say some Republicans will try to sidestep that decision on Thursday, when the State Board of Elections will consider new plans that technically follow that ruling but raise other issues.

The U.S. Justice Department, the North Carolina NAACP, the League of Women Voters, and others brought the original case.

"The state did its best to restrict voting opportunities and the 4th Circuit shot that down," said Allison Riggs, who argued in court for the League of Women Voters. "And now all that's left is the counties to give it their best shot."

Election authorities in North Carolina's 100 counties are tasked with implementing the court's decision.

Under the old law, there were fewer days of early voting but counties had to offer at least the same number of hours as the previous presidential election. The July ruling added days but got rid of that hours requirement.

Most counties came up with new early voting plans that have bipartisan support. But Riggs says in about a third of counties, the plans "range from outrageously bad to sort of bad to this is problematic and doesn't make good sense."

We understand very clearly the intentionality around voter suppression. And it feels like Jim Crow.

Republicans on local election boards in some rural, heavily African-American counties want to drastically cut hours and polling sites compared to 2012. Board members in three of those counties — Lenoir, Northampton and Bertie — declined interview requests.

In letters to the state, they say the reductions make sense because of costs, their small populations, and the threat of voter fraud, an argument that does not convince local civil rights activists.

"We understand very clearly the intentionality around voter suppression. And it feels like Jim Crow," said Corine Mack, the president of the Charlotte-Mecklenburg NAACP. "I know people use the term 'new Jim Crow,' you know. But when we look at what's happening in this country, it feels as if there are still some people who have not got it. They have not got the revelation that we are all human beings."

The chair of the Mecklenburg County Republican Party, Claire Mahoney, says she recognizes some African-Americans view this in terms of the state's history of discrimination.

There are legitimate reasons to reduce early voting, argued Mahoney; candidates have less time to campaign and early voting sites are often not staffed as well to prevent fraud.

Republicans are looking at maintaining and ensuring the integrity of the election process.

"Republicans are looking at maintaining and ensuring the integrity of the election process," she says.

Evidence in the North Carolina case has shown it is tougher to verify registrations when people sign up during early voting. But although the risk of fraud is real, the judges ruled there's little to no evidence of it actually happening.

Nationwide, voter fraud is also very rare. A law professor at the Loyola Law School in Los Angeles tracks claims of voter fraud. Of the more than 1 billion votes studied, he found only 31 credible cases of fraud.

Despite the minimal risk, several other states have adopted stricter voting laws in recent years. A federal appeals court also struck down a voter ID requirement in Texas last month.

But amid the disagreements, the North Carolina Board of Elections is encouraging early voting.

"We want to make sure that voting option to which many folks have become accustomed is a robust one throughout the state," said Josh Lawson, the board's general counsel.

The State Board of Elections will have the final say on the counties' early voting plans. The board plans to settle this fight at its meeting Thursday.