Accessibility links
Voters Are Rejecting Trump And Clinton, More Than Rejected Main Candidates In 2012 As many as 1 in 5 voters are either undecided or are choosing someone other than Hillary Clinton or Donald Trump. 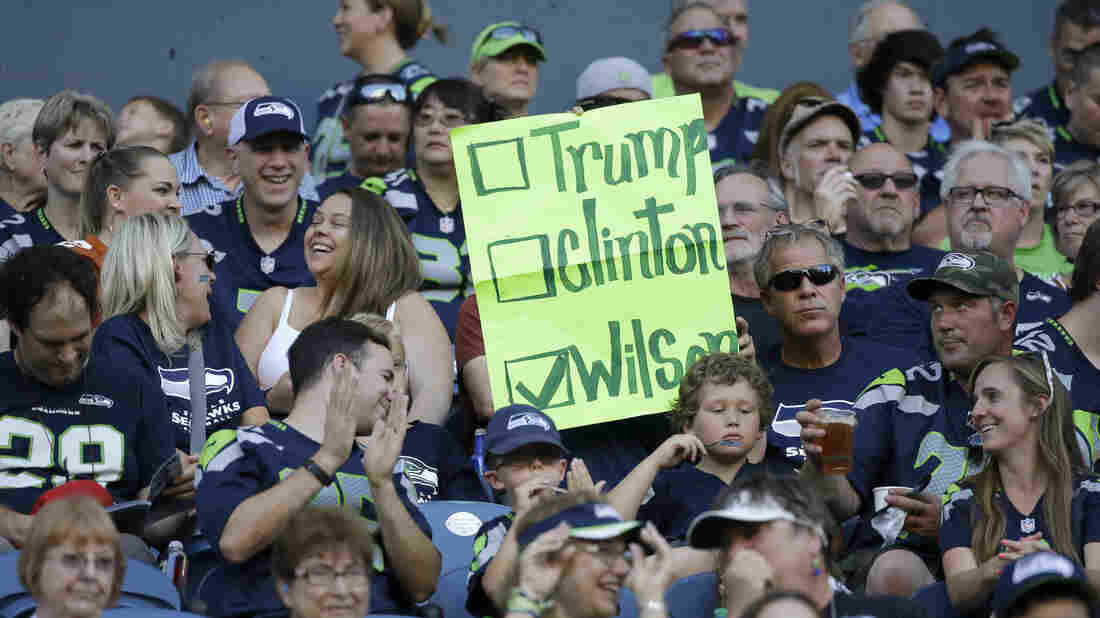 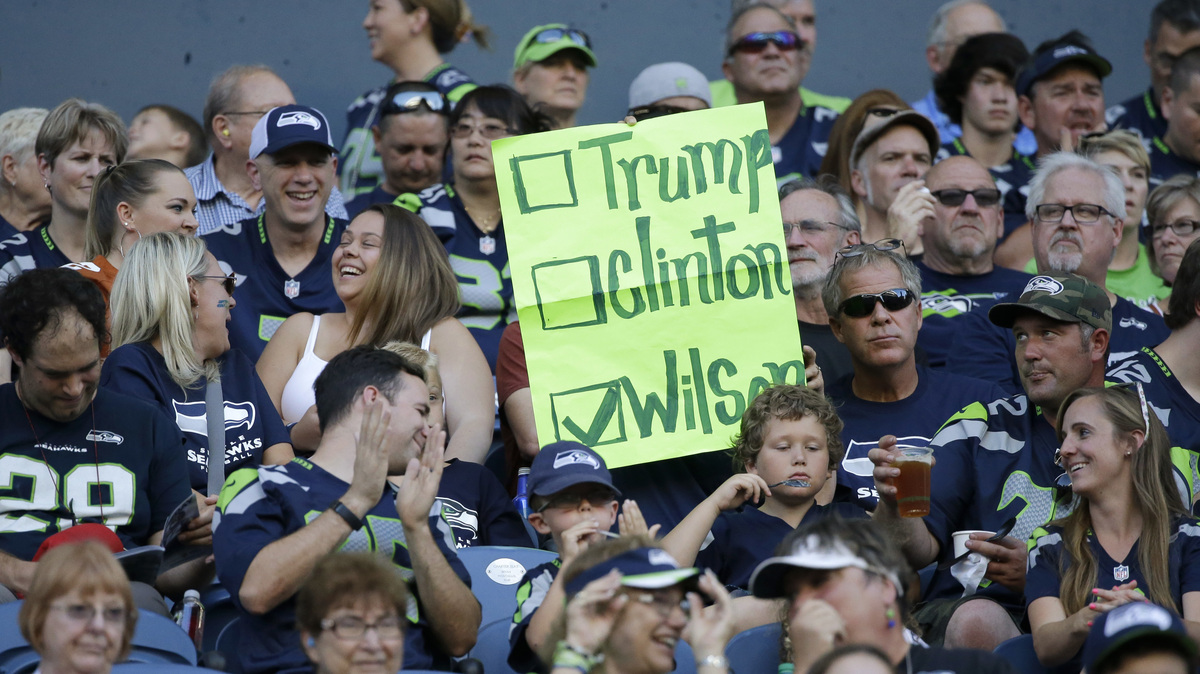 A Seattle Seahawks fan holds a sign suggesting quarterback Russell Wilson for president instead of Hillary Clinton or Donald Trump.

You've heard it a bajillion times at this point: Donald Trump and Hillary Clinton are the two most unpopular major party presidential candidates on record. Both of them have unfavorability ratings of more than 50 percent.

But here's one more place that unpopularity pops up: the number of people who simply don't choose either candidate. Especially when you compare this election with 2012, a massive number of people are either choosing third-party candidates or simply have not yet decided.

The below chart shows the share of people who, in head to head polls, choose neither Clinton nor Trump, compared to similar polls in 2012 and 2008. (Yes, the chart combines both likely- and registered-voter polls, but this chart is intended to just show the general shape of how people's opinions have shifted.)

Statistician Drew Linzer first pointed this out on Twitter (with a chart that smooths these trends out way more than ours does).

The big separation occurs sometime in mid-January, right as the primaries and caucuses were starting. Suddenly, in February and March, as Trump and Clinton began their marches toward their nominations, lots of 2016 voters decided they didn't want to vote for either Trump or Clinton.

Throughout 2015, the Trump-Clinton matchup in polls had been purely hypothetical — no primaries had happened yet, so there wasn't a clear, quantifiable indication of who was likely to win. But as their nominations became more likely, people either chose someone else or decided they were undecided.

Importantly, these are two-way polls between Trump and Clinton, meaning they aren't separating out Libertarian candidate Gary Johnson and Green Party candidate Jill Stein. It's hard to compare 2016's four-way race to 2012's, as polls this year are counting third-party candidates far more often than polls did in 2012 (when Stein and Johnson were also their parties' candidates).

However, including Stein and Johnson bumps the number of people who pick neither major party candidate way higher. In the 10 most recent Trump vs. Clinton polls listed on RealClearPolitics, an average of 12.5 percent of people chose neither candidate. Make it a four-way poll with Johnson and Stein, and almost 20 percent of Americans chose someone other than Clinton or Trump or were simply undecided. Around the same time in 2012, the share was only around 13 percent (according to the few four-way 2012 polls RealClearPolitics lists).

So there are two different forces at work here. One is that a bunch of people are undecided — right now, around 7.5 percent, whether you look at this year's two- or four-way polls. That puts this year's average a couple points higher than where it was at this point in 2012 — somewhere just above 5 percent. A couple of percentage points may not seem like a big deal right now, but then, that's millions of potential voters to get off the fence.

As for third-party candidates like Johnson and Stein, the future is also unclear. Their share ("other") looks like it's slipping a little in this year's two-way polls, but it's steady in four-way trends.

That suggests a change from 2012. Unfortunately, there aren't many Obama-Romney-Johnson-Stein polls to go off of from that year, but at least in two-way polls, it's clear that "other" voters were disappearing — and fast — as Election Day approached.

Voters in 2012 may have abandoned their outside choices in favor of a major-party, non-spoiler candidate, but with this year's wildly unpopular major-party choices, it may be tougher for Clinton or Trump to get those third-party voters to budge.

And those third party candidates provide some insight into what on earth undecided voters are thinking. Because of the often stark differences between candidates, undecideds are easily written off as dopey imbeciles:

But even despite the ocean between Trump and Clinton, it's easy to see how people might be undecided yet in this election, especially given the new prominence that Johnson and Stein have this year.

It's easy to imagine a former Sanders supporter who is torn between reluctantly supporting Clinton (and thereby helping defeat Trump) or supporting Stein more enthusiastically (and potentially helping Trump). The same could be true of libertarian-leaning, reluctant Trump supporters considering whether they should vote for Gary Johnson, for example.