Accessibility links
'Come From Away' Musical Tells Story Of Resilience After 9/11 On 9/11, 38 planes were rerouted to Gander, Newfoundland. More than 6,000 passengers and crew were taken in by families there. Their story is the subject of a new musical called, Come From Away.

On 9/11, 38 planes were rerouted to Gander, Newfoundland. More than 6,000 passengers and crew were taken in by families there. Their story is the subject of a new musical called, Come From Away. 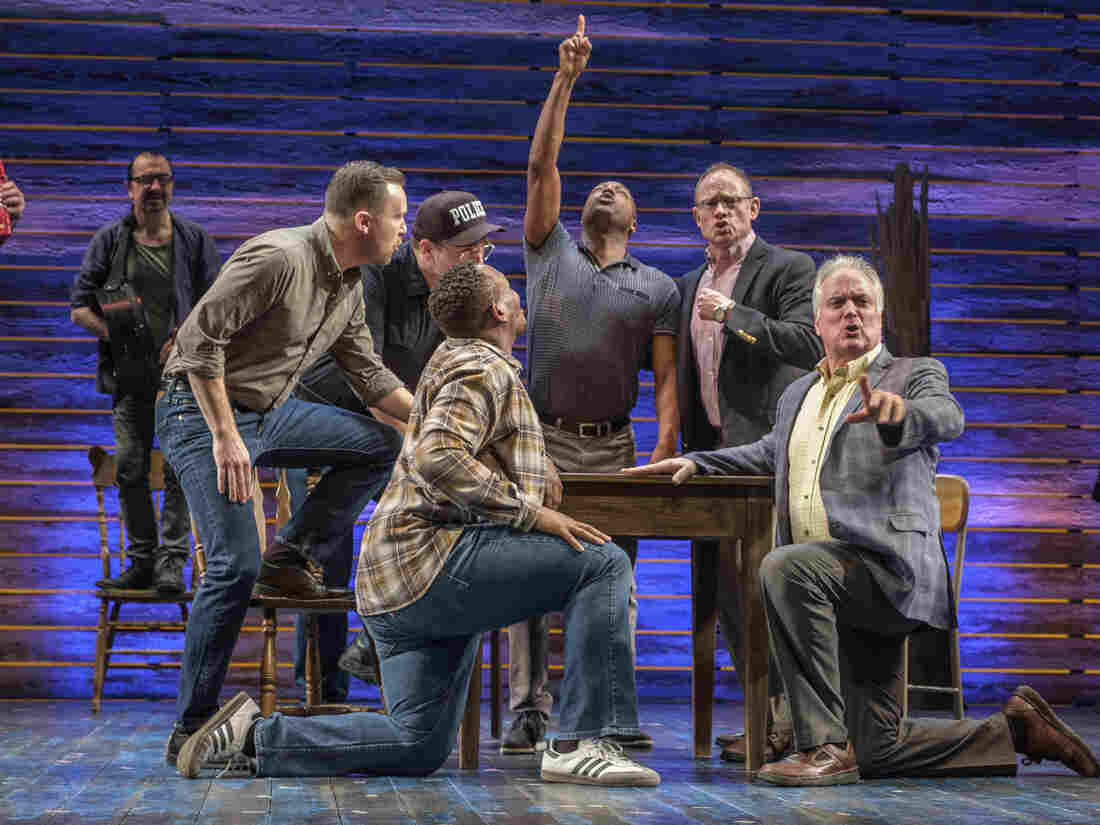 As we near the 15th anniversary of the September 11 attacks, we're reminded of many stories of courage and sorrow that emerged that day. One of the lesser known stories is the subject of a new musical "Come From Away." It tells what happened in the small town of Gander, Newfoundland. More than 6,000 airline passengers were forced to land there on 9/11 after America's airspace was closed. The play opened last night at Ford's Theater in Washington, and NPR's Wade Goodwyn saw it.

(SOUNDBITE OF SONG, "WELCOME TO NEWFOUNDLAND")

GOODWYN: The opening number grows into a forceful declaration of place.

GOODWYN: The show was filled with the music of Newfoundland, a mix of Celtic and rock.

GOODWYN: As the subject material that makes a hit musical can be confounding. An entire show about what the chorus line is thinking? They want a job. That's like one song, right? And you wouldn't suppose a number about thousands of people sitting on the tarmac would be all that compelling, but the song "28 Hours" is hilarious in a thank God that wasn't me sort of way.

UNIDENTIFIED SINGERS: (Singing, as character) Something to drink.

UNIDENTIFIED SINGERS: (Singing, as character) So the flight attendants brought out all the mini bottles of liquor and delivered them to everyone.

UNIDENTIFIED SINGERS: (Singing, as character) So everyone got friendlier.

UNIDENTIFIED SINGER #1: (Singing, as character) I took a couple of pictures of the view there in my camera. We didn't know where we were.

UNIDENTIFIED SINGER #1: (Singing, as character) But we knew that we were hammered. Open the airplane doors. Wait out all the rumbles. Show yourself you're better than who they are wherever we are.

GOODWYN: Retired American Airlines captain Beverley Bass was at the helm of Flight 49, a 777 going from Paris to Dallas Fort Worth.

BEVERLEY BASS: It was such a tremendous relief to get off the airplane that we'd been in so long. Probably the most astounding thing was they had tables and tables lined up of food and cakes and everything you can even imagine. The people of Gander had stayed up all night cooking food for everybody.

GOODWYN: Bass wanted to be a pilot from the age of seven, and she became the first woman captain at American Airlines in 1986. She's played by Jenn Colella.

(SOUNDBITE OF SONG, "ME AND THE SKY")

JENN COLELLA: (Singing, as Beverley Bass) American Airlines had the prettiest planes, so I applied as a flight engineer, but the World War II pilots - they all complained. They said girls shouldn't be in the cockpit. Hey, lady. Hey, baby. Hey, why don't you grab us some drinks?

GOODWYN: Gander and the surrounding little towns play host to the thousands of uninvited visitors for five days - fed them, bathed them and clothed them, too. The luggage stayed on the planes. Hundreds of passengers and crew returned to Gander on the 10th anniversary. And that's where the show's authors, Canadian husband and wife team David Hein and Irene Sankoff, who both wrote words and music, interviewed many of them.

IRENE SANKOFF: And we spent nearly a month out there speaking to anyone who would speak to us. And after a month, we still had people that we didn't have time to meet with. I mean, everyone wanted to speak to us. And even when we traveled back to New York, there were people who were stranded there that were out in New Jersey. And they traveled in two hours by train to talk to us 'cause they felt so strongly about how well they were taken care of when they were stranded there.

GOODWYN: Much of the show revolves around the interplay between the thousands of American passengers and local Ganderites. In one scene, two young, gay American passengers find their way into the local pub, have one too many, and one blurts out to the other's horror that they're a couple.

(SOUNDBITE OF MUSICAL, "COME FROM AWAY")

UNIDENTIFIED ACTOR #1: (As Matty) You're gay?

UNIDENTIFIED ACTOR #2: (As character) And I'm about to pass out.

CHAD KIMBALL: (As Kevin Tuerff) But then Matty (ph) says...

UNIDENTIFIED ACTOR #1: (As Matty) Well, praise be to God. My daughter's gay.

KIMBALL: (As Kevin Tuerff) And then Brenda (ph) says...

UNIDENTIFIED ACTOR #3: (As Brenda) Sure, my sister's gay, and the woman across the road just ran off with her best friend.

KIMBALL: (As character) And then Brenda's brother says...

UNIDENTIFIED ACTOR #4: (As character) Our uncle is 68 years old, and he just told us he's a bisexual.

KIMBALL: (As Kevin Tuerff) We somehow ended up in the gayest town in Newfoundland.

GOODWYN: Actor Chad Kimball plays Texan Kevin Tuerff, who was one half of that couple. As he flew away from Gander, Tuerff vowed to himself that he was going to try to live his life like the honorary Ganderite he'd become.

KEVIN TUERFF: They don't think that they did anything special and that we would do this for anybody at any time. But I really wondered, like - would we - in America, would we do what they did? And I wasn't sure.

GOODWYN: On the day after America's airspace finally reopened and the 38 wide-bodies flew away one by one, Gander's mayor found over 60,000 dollars stuffed into the town's suggestion box. It was a thank you from hundreds of grateful passengers. For a scholarship, a note said.

(SOUNDBITE OF SONG, "SOMEWHERE IN THE MIDDLE OF NOWHERE")

UNIDENTIFIED SINGER #2: (Singing, as character) For the people who gave up their time, and they gave up their town. So let's give them a scholarship.