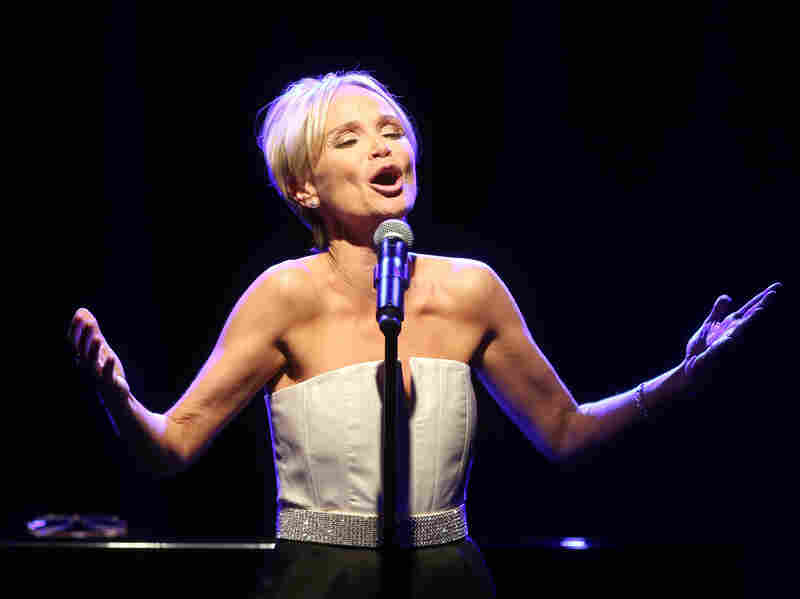 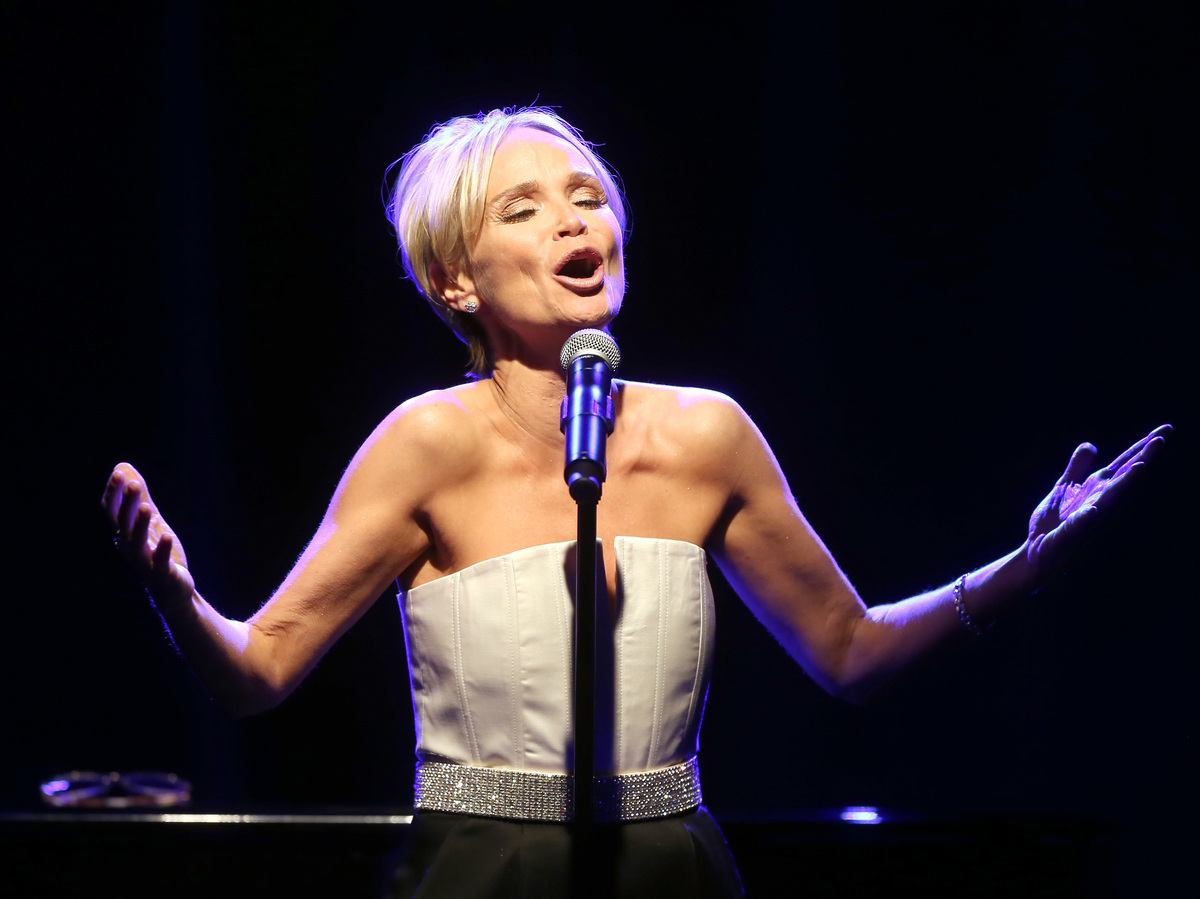 Kristin Chenoweth has starred on Broadway in Wicked and on television in Pushing Daisies and The West Wing. We've invited Chenoweth, who is 4 feet 11 inches, to answer three questions about 6-foot-1 model and actress Brigitte Nielsen, who is perhaps most famous for her brief marriage to Sylvester Stallone. Click the audio link above to find out how she does.

And now the game where we ask really interesting people to answer questions about things that simply do not interest them. It's called Not My Job. Kristin Chenoweth is what they used to call a triple threat. She can sing, as she did on Broadway, most notably in "Wicked." She can act in TV shows like "Pushing Daisies" and "The West Wing," and she can kill you with just her bare hands. We're a little wary but still delighted to talk to her. Kristin Chenoweth, welcome to WAIT WAIT... DON'T TELL ME.

SAGAL: They are amazing here, Kristin. I'm sorry you can't be with us in person. You strike me - and we've never met, but I've seen you in many, many films and shows and soundtracks - as somebody who must have, like, emerged from the womb performing. Were you one of those kids?

CHENOWETH: Of course. I came out doing a split and wearing a crown.

SAGAL: Of course you did.

LUKE BURBANK: God, that must have been painful for your mother.

SAGAL: Do you imagine - do you remember your stage debut?

CHENOWETH: Yeah, I do. It was "The Nutcracker." I played one of the mice.

SAGAL: You were a mouse?

CHENOWETH: Yeah. I know it seems inappropriate, but yeah.

SAGAL: Yeah. Did you somehow shine as the mouse in a way that made people go, that mouse is going places?

CHENOWETH: Of course. Have we met?

SAGAL: Right. And you were also involved in beauty pageants. I've read that your beauty pageant career actually helped you out, got you an actual scholarship, helped you with your education. Is that true?

CHENOWETH: It did. I won the talent portion and I did win Miss Congeniality, never mind that I carry a knife with me but, yeah, I...

SAGAL: You strike me - maybe because of the performances I've seen - as someone - or maybe because of your appearance - of someone who seems always very cheerful. Is that a burden? Do you ever, like, I want to go out and swear at people?

SAGAL: On - if I'm not mistaken, on the TV show, "Glee," you played a very troubled, unhappy person. Is that right?

CHENOWETH: Yeah, I'm not really sure why Ryan Murphy wanted me to play that sort of drunk, has-been character, but...

CHENOWETH: And for some reason, it rang true for me (laughter).

SAGAL: When you played that, that was, for example, very different from the role of Glinda in "Wicked." Did you go to your agent and say I want more dark, miserable people. I want to kill something?

CHENOWETH: (Laughter) No, but that's a really good idea. Thanks.

ADAM FELBER: Kristin, I have a question for you because I'm married to an Oklahoma girl, and she's as relentlessly cheery as you are. And so tell me something, when you say something truly terrible about a person, do you always follow it up with the phrase bless her heart?

CHENOWETH: First of all, I'd like to congratulate you for getting a girl from the best state in the union. B, we always, always, follow it with bless your heart because then it's like, void, that you said anything nasty. It's sort of like having a doughnut and a Diet Coke.

CHENOWETH: If you follow a doughnut up with a Diet Coke, it's void. It never happened.

SAGAL: Is the power of that phrase unlimited? Can it cancel anything, like, I want her dead, bless her heart? You can do that.

CHENOWETH: No, I believe I've even said, she's so ugly she's been beat with an ugly stick, bless her heart.

FELBER: Yeah, that's how it's done.

CHENOWETH: I want to be very, very clear here. I don't say that anymore, OK?

SAGAL: Absolutely not. Well, Kristin Chenoweth, we are delighted to talk to you. We've asked you here to play a game today we're calling...

SAGAL: So you, Kristin, are physically small with an outsized talent. So we were wondering, what would be the opposite of that?

SAGAL: And we went with Brigitte Nielsen, the 6-foot-1 formal model and actress, perhaps most famous for her very brief marriage to Sylvester Stallone back in the '80s.

SAGAL: That was the intent.

SAGAL: We're going to ask you three questions about Ms. Nielsen, and if you can get two right, you'll win our prize for one of our listeners - Carl Kasell's voice on their voicemail. Bill, who is Kristin Chenoweth playing for?

SAGAL: All right. Here's your first question about Brigitte Nielsen. Ms. Nielsen made her movie debut at the age of 21 in the title role of "Red Sonja." That was the 1985 sword-and-sorcery epic also starring Arnold Schwarzenegger. How did Ms. Nielsen nail the audition? A, she just shouted out what she said was an ancient magical curse but was really just the phrase what's your sign in Danish; B, she put on the costume, stood there, shrugged and said, I'm sorry, I cannot remember the script. I am not an actress; or C, she sent the director a semi-nude photograph of herself with a note saying, I would love to meet you.

CHENOWETH: I'm going to say B.

SAGAL: You're going to say B?

CHENOWETH: Yeah, B as in boy.

SAGAL: You are right. That's what she did.

SAGAL: By the way, the option C, she attached a note to a semi-nude photograph of herself, was not how she got that part. That's how she got Sylvester Stallone.

SAGAL: It's true. She sent Sylvester Stallone that note, he responded, they fell in love.

FELBER: Oh, somebody read this to me.

SAGAL: So they met, they fell in love, they divorced their respective spouses and they married soon thereafter. How did Sylvester Stallone express his enduring love for his new bride? A, he got heel implants so he could be as tall as she was; B, he commissioned nude statues of the pair of them for his courtyard; or C, he wrote for her a 400-stanza epic poem about the romance called "The Brigittiad" (ph).

CHENOWETH: Oh, that's hard. I really don't like to lose. I'm probably going to lose on this, so I'm going to say C.

SAGAL: Well, as you know, he is a writer, but he didn't write that. No, what he did was he commissioned the nude statues. But - this is true - their marriage lasted so briefly that by the time they got divorced - they got divorced, rather, before the statues could be finished. And then - this is true - the sculptor took the clay he was working with for her figure and he just took it and made his nude figure bigger.

SAGAL: You know, you still have one more chance here. This is - the third question, if you get this right, you still win. So after divorce from Sylvester Stallone, Ms. Nielsen went on to some more romances and some harder times. But then in 1999, she wrote and starred in a comeback movie which frankly addressed her own struggles. What is that movie called? Is it called, A, "She Is Too Tall;" is it called B, "She Had A Thing With Flavor Flav;" or C, "Her Nude Statue Got Melted Down To Make Her Ex-Husband's Bigger?"

CHENOWETH: Oh, man. I wish my Google was faster.

FELBER: That's not supposed to be out loud.

SAGAL: Yeah. Most people just think that, Kristin. They don't say it.

CHENOWETH: I'm going to say that one.

SAGAL: You're going to say "She's Too Tall?"

CHENOWETH: Yeah, I'm going to say that one.

SAGAL: That's the name of the movie.

SAGAL: The movie is about a very tall woman who struggles with the challenges of being too tall. Bill, how did Kristin Chenoweth do on our quiz?

KURTIS: She is Oklahoma strong. She's a winner at two and 0.

FELBER: (Singing) There she is, she got two questions right.

SAGAL: As a pageant winner, are you obligated to cry now?

CHENOWETH: Yes, hold on, Pete. I'm going to see if I can work it up. I'd like to thank the judges and the live audience.

CHENOWETH: Thank you so much, and I'm currently making a donation to all the tall people in the world. God bless you.

SAGAL: Kristin Chenoweth, her new album, "The Art Of Elegance," is out later this month. She's also starring in the new TV series based on Neil Gaiman's "American Gods." Kristin Chenoweth, thank you so much for being with us. Great to talk to you.

CHENOWETH: You, too. (Unintelligible). Bless your heart.

CHENOWETH: (As Glinda, singing) Popular, I'll help you be popular. You'll hang with the right cohorts, you'll be good at sports, know the slang you've got to know. So let's start 'cause you've got an awfully long way to go. Don't be offended by my frank analysis. Think of it as personality dialysis. Now that I've chosen to become a pal...

SAGAL: In just a minute, it's a pumpkin spice-flavored Listener Limerick Challenge. Call 1-888-WAIT-WAIT to join us on the air. We'll be back in a minute with more of WAIT WAIT... DON'T TELL ME from NPR.