Accessibility links
In The Battle To Save Frogs, Scientists Fight Fungus With Fungus A deadly fungus is devastating frog populations around the world. In California, scientists are racing to find a way to immunize one species, mountain yellow-legged frogs, against the fungus. 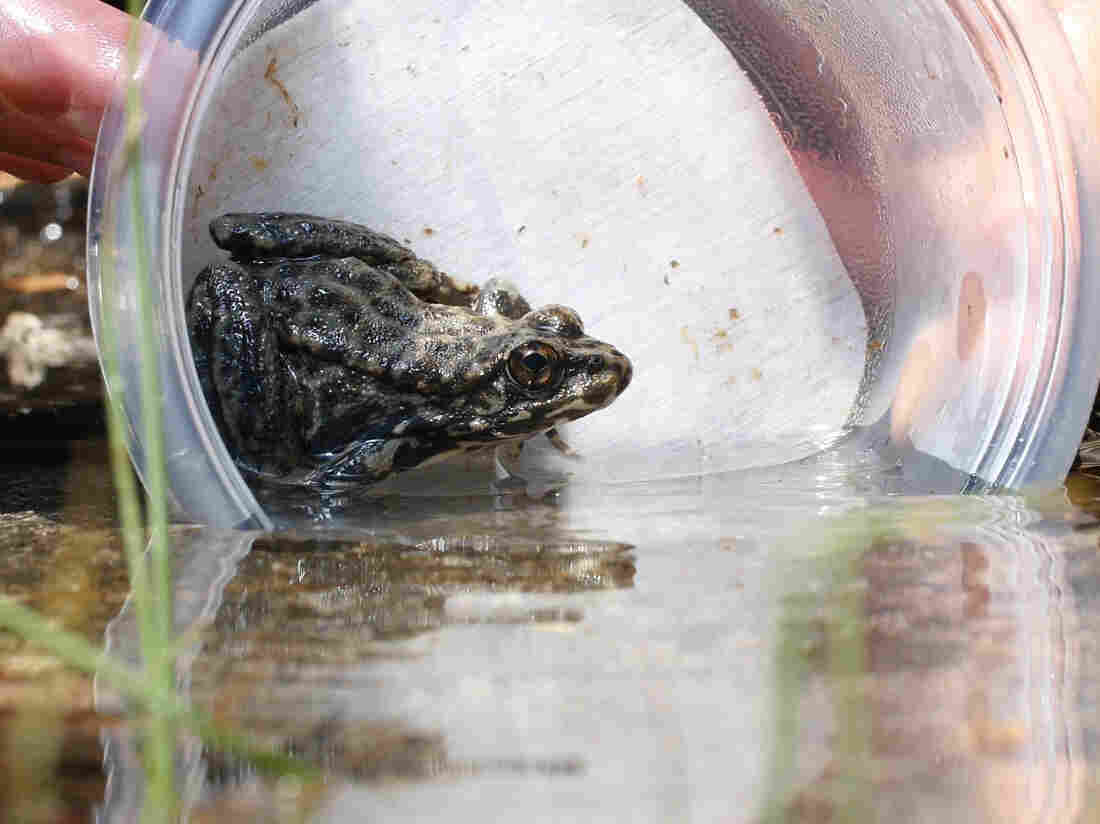 A mountain yellow-legged frog returns to the wild in the Desolation Wilderness, south of Lake Tahoe in California. Josh Cassidy/KQED hide caption 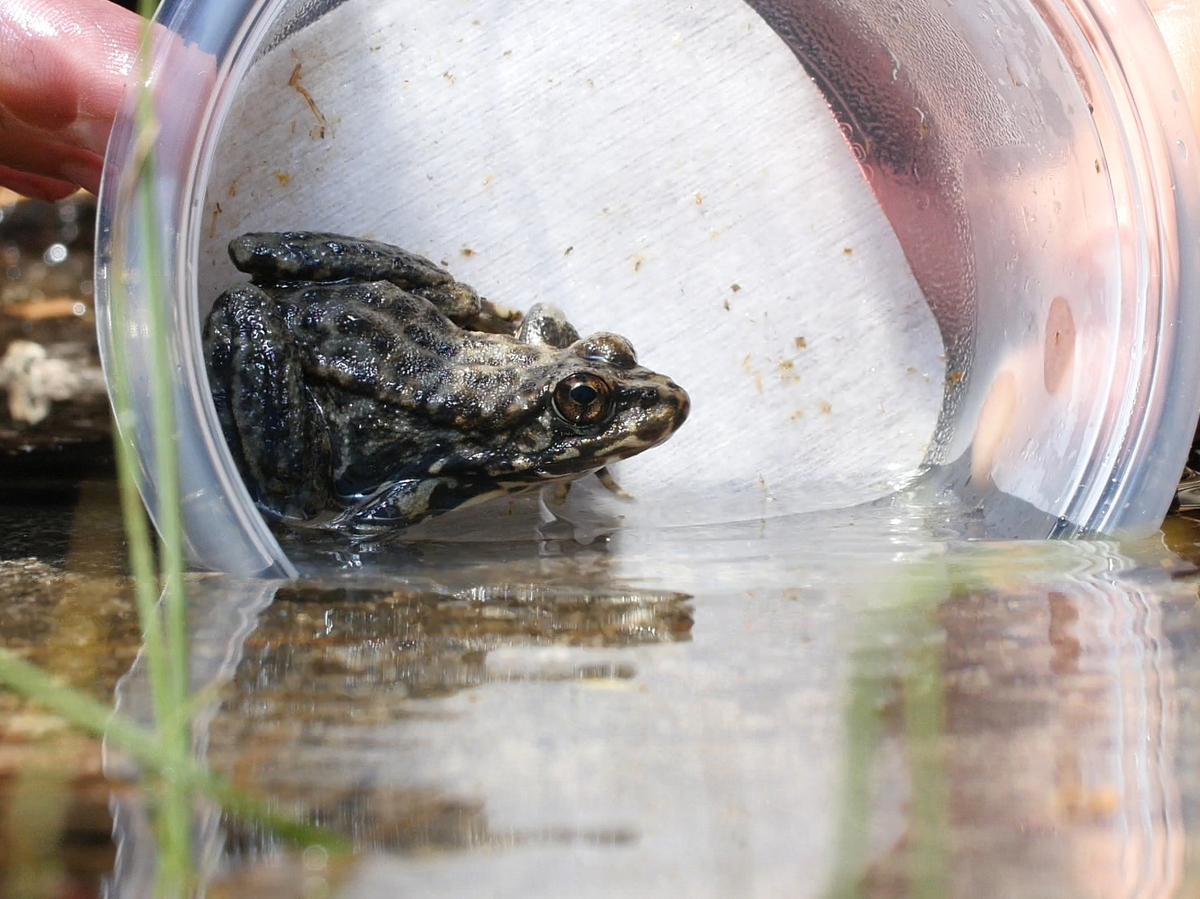 A mountain yellow-legged frog returns to the wild in the Desolation Wilderness, south of Lake Tahoe in California.

A deadly fungus that has been devastating frog populations is spreading across the globe — it has helped drive the extinction of 200 species so far. In California, the chytrid fungus has moved inexorably across the Sierra Nevada, leaving thousands of frogs dead.

But scientists are trying to turn the tide against the fungus with an experimental treatment, one that could matter to frogs worldwide. They're making a last-ditch effort to save the endangered mountain yellow-legged frog by immunizing it against the fungus.

Mountain yellow-legged frogs, found only in California's alpine lakes, have been in steep decline owing to the fungus while also falling prey to nonnative trout. More than 90 percent of the population has disappeared.

"When it hits, it's within weeks that they're just gone, just literally gone," says Jessie Bushell, director of conservation at the San Francisco Zoo.

Scientists Urge Ban On Salamander Imports To U.S. To Keep Fungus At Bay

Bushell is part of an emergency search-and-rescue operation for the frogs. Last summer, she got up before dawn and drove five hours to meet a helicopter flying out of the Sierra Nevada.

The coolers were holding hundreds of wiggling, green tadpoles, the sole survivors of a deadly outbreak at their remote alpine lake. Federal biologists had found dozens of frogs dying from chytrid fungus and, hoping to save the species, they collected their remaining young.

Bushell brought them to the San Francisco Zoo. Scientists there and at the Oakland Zoo are doing an experimental treatment on the frogs in the hope that they'll survive when they return to the wild. The treatment was pioneered at the University of California, Santa Barbara, where results have been encouraging.

"So what we do is we expose them to small amounts of this fungus," Bushell says, pointing to more than 200 of the frogs, no longer tadpoles, in quarantined tanks.

She is making the frogs sick in the hope of building their immunity to the fungus, which attacks the frogs' skin. 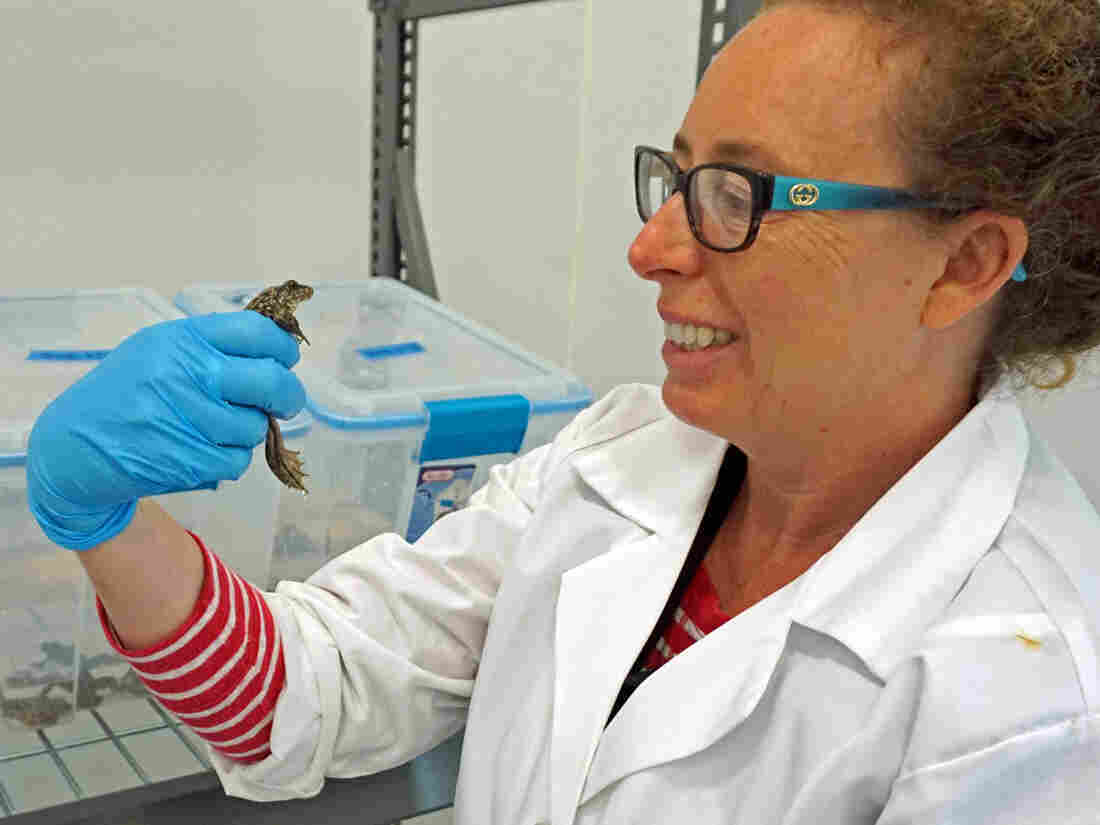 Jessie Bushell holds one of the yellow-legged frogs undergoing treatment at the San Francisco Zoo before it's released back to the wild. Lauren Sommer/KQED hide caption 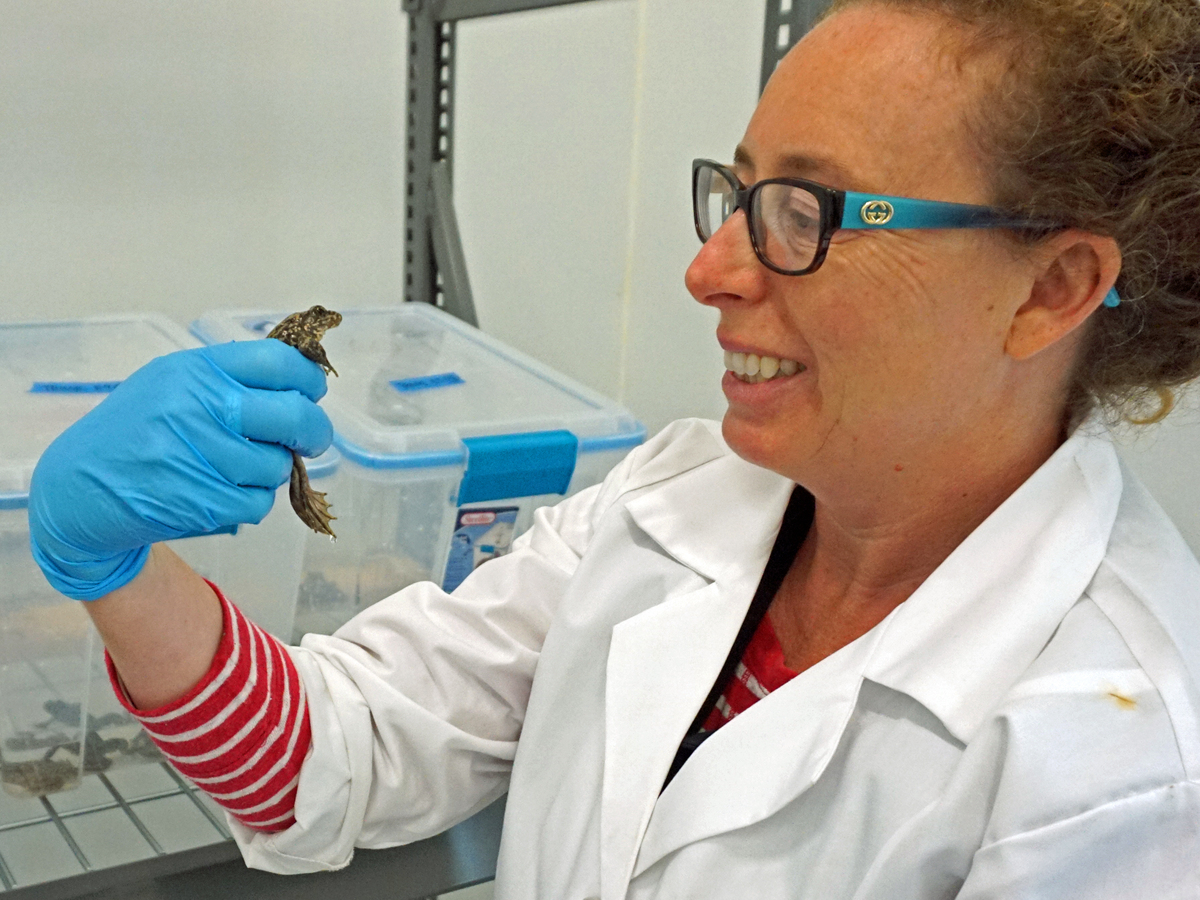 Jessie Bushell holds one of the yellow-legged frogs undergoing treatment at the San Francisco Zoo before it's released back to the wild.

"The skin is a really important part of the frog," she says. "They breathe through their skin underwater."

Frogs also absorb key nutrients such as electrolytes through their skin. But when the fungus attacks it, the skin stops functioning normally. The frogs die before their immune systems can fight the fungus off.

Bushell is hoping a mild fungal infection will teach the frogs' immune systems how to fight the fungus. She lets her frogs get sick, but before they get too close to dying, she gives them an antifungal treatment to clear up the infection.

When the frogs get chytrid again out in the wild, the idea is their immune systems will be trained.

"Their bodies identify it and can already be primed to fight off that infection, at least to keep it under control because they've seen it before," Bushell says.

For some of the yellow-legged frogs, the big test has arrived. Bushell and a field crew hike up a rocky trail in the Desolation Wilderness, south of Lake Tahoe.

Their big backpacks are loaded with frogs, each in its own tiny Tupperware container.

"It's a new frog home," says Bushell, looking at a sapphire-blue lake, surrounded by pine trees and granite cliffs. "An oasis for frogs."

But chytrid fungus is there, so their immunity will be tested. One by one, the team releases each frog on the water's edge.

"It's the best chance that we know how to give them," says Roland Knapp, a biologist with UC Santa Barbara who has tracked frog die-offs across the Sierra as the chytrid wave has moved through.

We're staring at what could be the extinction of a significant fraction of the world's amphibians.

Roland Knapp, biologist at the University of California, Santa Barbara

"I saw the biggest one I've ever seen last summer," he says. "Thousands of dying frogs. It was pretty rough to see."

That's why this is a last-ditch effort to save yellow-legged frogs.

"It sometimes seems a little crazy," Knapp says. "It's a huge amount of work."

But he says the early results are promising. This is the third summer the team has released immunized frogs.

"They seem to be surviving pretty well," he says.

If the immunized frogs survive the worst of the fungus outbreak, the mountain yellow-legged frogs may eventually be able to become resistant to it on their own, generation after generation, without human help.

"That means we have to figure out ways to keep these frogs on the landscape with the chytrid long enough that evolution can actually happen," Knapp says.

These Froggies Went A Courtin' And Gave Birth To Live Tadpoles

The biggest hope, and the biggest question mark, is whether this research could lead to a treatment for other frog species. Some frogs don't seem to be able to build immunity to chytrid the way the yellow-legged frogs can.

Scientists have watched chytrid fungus spread across the globe at an alarming rate. In Central America, they have brought some frog species into captivity to spare them.

Today, that's the only place those frogs exist. And there isn't much hope of returning them to the wild unless some kind of chytrid treatment succeeds.

"We're staring at what could be the extinction of a significant fraction of the world's amphibians," Knapp says. "So if we can do something to reverse that, even for a few species here and there, we should try to do that."

It's not hopeless, scientists say, but it could depend in large part on the survival of one California frog.