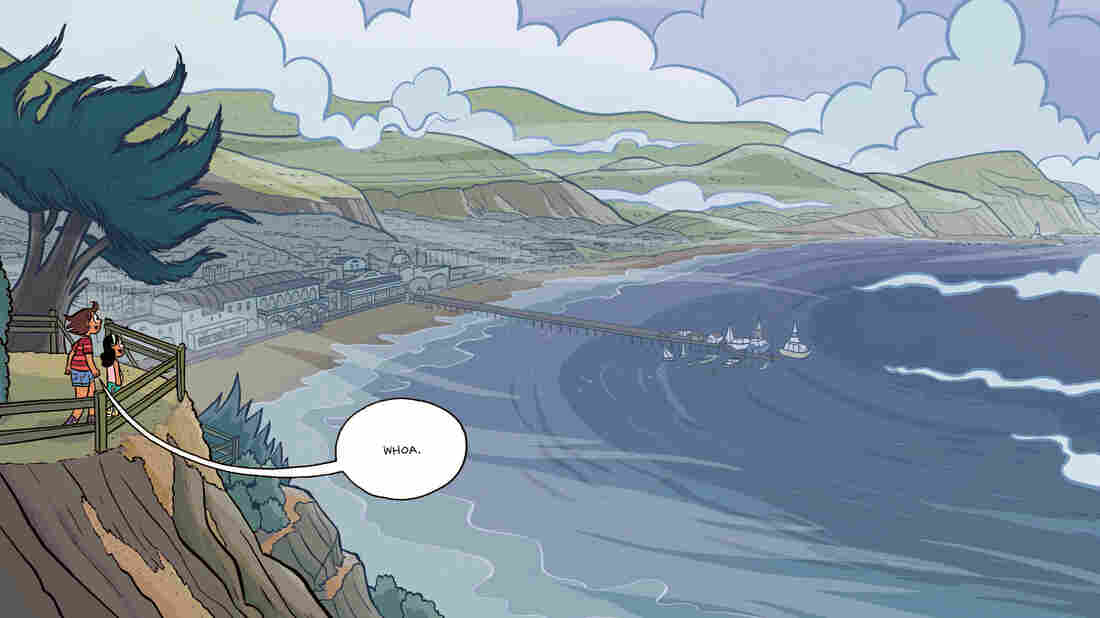 In Raina Telgemeier's new Ghosts, Cat and her little sister Maya move to a new town — and Maya, who suffers from cystic fibrosis, sets her heart on meeting one of the ghosts who supposedly haunt the place. Scholastic hide caption 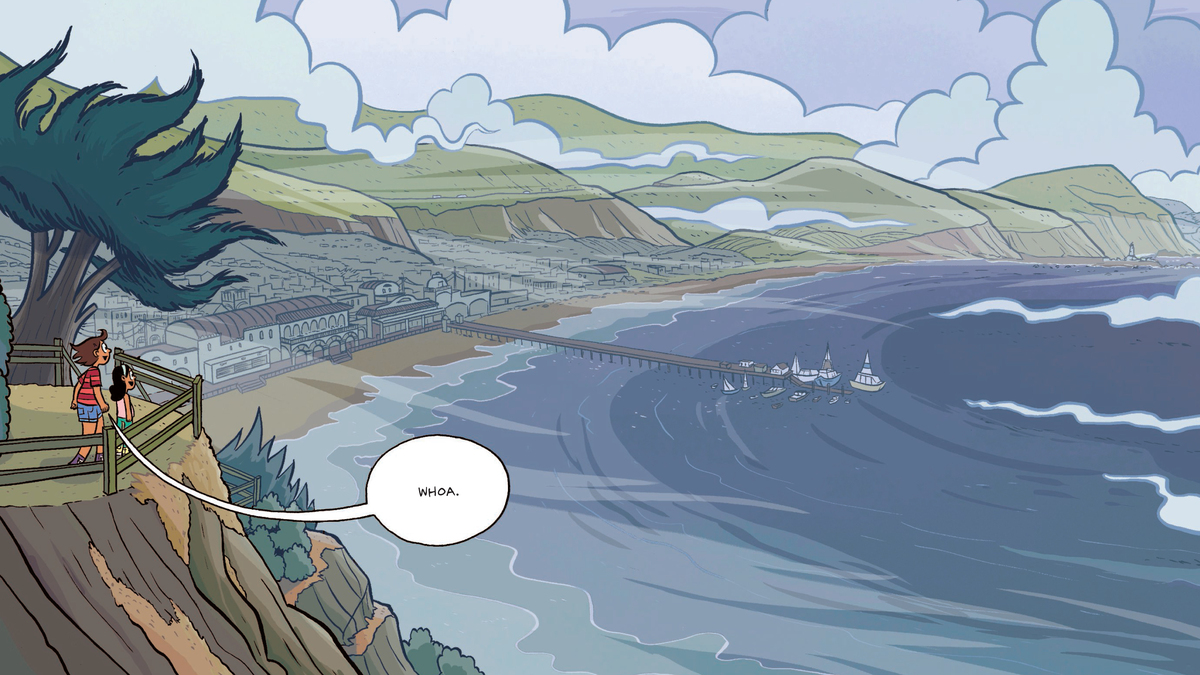 In Raina Telgemeier's new Ghosts, Cat and her little sister Maya move to a new town — and Maya, who suffers from cystic fibrosis, sets her heart on meeting one of the ghosts who supposedly haunt the place.

Raina Telgemeier's new graphic novel Ghosts is about death. But it's written for children.

Telgemeier tells NPR's books editor Barrie Hardymon that stories serve as a way to begin difficult conversations. "Stories are such a powerful way of communicating ideas and in comforting people," she says. 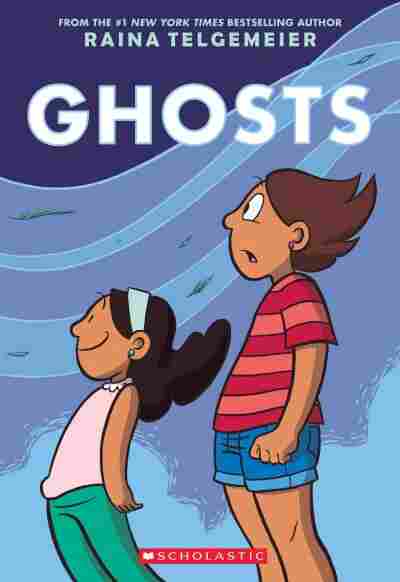 Telgemeier has been writing and drawing graphic novels for years. Her 2010 memoir Smile recounts what it was like to be teased by other children face after losing two front teeth in sixth grade and wearing "embarrassing headgear," braces and "even a retainer with fake teeth attached."

In 2012, Telgemeier's Drama told a "colorful tale of teenage intrigue, but this time the mad crushes and mood swings take place among the stage crew of a middle-school theater production," said NPR's Glen Weldon, who called it "an unabashedly sunny, funny and warmhearted read."

Her latest graphic novel Ghosts is about two sisters, middle-schooler Catrina and little sister Maya, who has the incurable lung disease cystic fibrosis. Their family has just moved to a new town on the Northern California coast where their parents hope the cool sea air will help Maya breathe.

The town turns out to be full of ghosts — and Maya wants nothing more than to befriend them, though her older sister can't accept that Maya may soon join them. The story carries themes of acceptance, packed with imagery of the town, its ghosts and its Day of the Dead celebrations.

Telgemeier talked with NPR's Barrie Hardymon about broaching difficult topics with children, why she likes skeletons, and the similarities between characters and real people in her life.

On her depictions of ghosts and skeletons in the book

I like skeletons. I've always had a fondness for skeletons. It probably goes back to the old Disney cartoon The Skeleton Dance, the old Silly Symphonies from the 1930s. Where they're dancing and there's like a cute song that plays. And there's nothing scary about that. ...

I think most kids — most people probably — have some sort of fear of death. Including myself. And the idea of making it not scary but something jovial has always appealed to me. And so in depicting the ghosts in this book, and the skeletons in this book, I wanted them to be friendly. I wanted them to feel like they were friends. And it really spoke to me. And I've been in a position in the past few years where I've dealt with a lot of loss and a lot of people exiting my life in various ways. And so it was kind of also just an opportunity for me to kind of make peace with that, I suppose.

On the characters' similarities to real life

I think Cat has more in common with me. She's got the anxiety, she's got the fear, and she would rather avoid this uncomfortable topic than face it head on. But Maya, who of course who is dealing with this in her own being, she wants to understand. She wants to know. She wants to get closer to it so that she doesn't have to be afraid.

And then she ends up kind of dragging Cat along for that ride. And you know, Maya's just this un-put-downable spirit. She's just — she's exuberant and she's lively and she's got all the life in her. And I love her character so much.

She's not based on one specific person but she's based on a lot of kids that I've met. Who just, no matter what, you can't get them down. And I had a cousin who passed away when she was 13 of cancer a few years ago, and she was the same kind of kid. She was the one who was cheering everybody else up and telling everybody not to cry. And after she was gone, to be able to remember her that way, and to remember her fondly — it was so incredible. I mean, this story is not their story, this story is not her story. But I think the character of Maya certainly takes a few cues from this person.

On presenting loss to young readers

It's something we all experience. We all have to go through loss. And some kids have to deal with loss a lot sooner than others do. And I know a lot of kids who have a lot of anxiety and have a lot of questions that there's no way anybody could possibly answer.

But I think because writing fiction lets you move into sort of a speculative place, it means that you can start to create stories around the idea of loss. And stories are such a powerful way of communicating ideas and in comforting people. So even young readers, I would like to believe that it's a means of opening up conversations. It's a means of telling stories yourself and remembering people that you may have lost in your life. And that's a really powerful thing and a way that people can connect to one another while they're still here. And I think that's a lot of the message that I was trying to get across with the book itself.