Accessibility links
Hillary Clinton And Donald Trump's Tax Plans, Explained Their tax plans are mirror images, in some ways. Trump's calls for substantial cuts in tax rates with savings to the wealthiest households, while Clinton's sets out to raise taxes on the very wealthy. 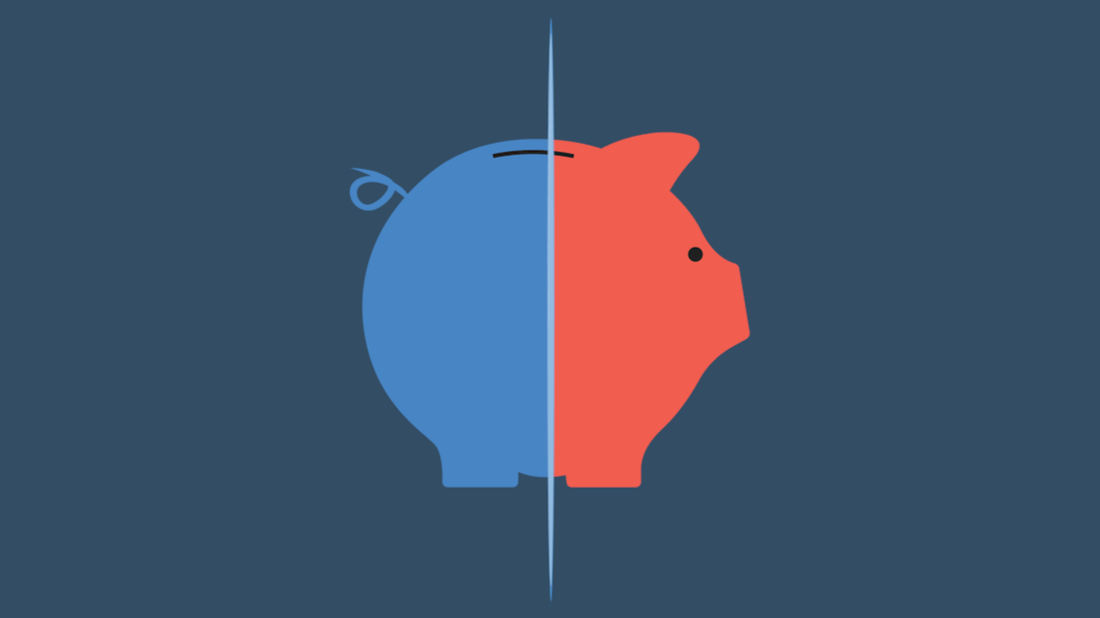 In some ways, Donald Trump and Hillary Clinton's tax plans are mirror images of each other. Renee Klahr/NPR hide caption

With just under two months to go before the November election, we're taking a closer look at where the candidates stand on some key issues. We begin with the rival tax plans offered by Hillary Clinton and Donald Trump.

In some ways, the candidates' tax plans are mirror images of one another. Trump's plan calls for substantial cuts in tax rates — with much of the savings going to the wealthiest households. That would take a bite out of federal revenues and increase the deficit. Clinton, on the other hand, sets out very deliberately to raise taxes on the very wealthy. That would generate a lot of extra money for the government, which she wants to use to pay for programs like subsidized college tuition.

Trump outlined the latest iteration of his plan in a speech last month to the Detroit Economic Club.

"I am proposing an across-the-board income tax reduction especially for middle-income Americans," Trump said. "This will lead to millions of new and really good-paying jobs. The rich will pay their fair share, but no one will pay so much that it destroys jobs or undermines our ability as a nation to compete."

Trump's plan would flatten the income tax system, leaving just three tax brackets. The top rate would fall from 39.6 percent today to 33 percent. (Trump initially proposed a top tax rate of just 25 percent, but modified his plan to look more like one from House Republicans. As a result, his plan no longer balloons the deficit by $10 trillion over a decade, though it does still add to the government's red ink.)

Clinton has yet to say how she would handle taxes for middle-income taxpayers, but she's proposing a significant tax increase for the very wealthy. She's renewing President Obama's call for the so-called Buffett rule — that is, a minimum tax rate of 30 percent for anyone making over a million dollars a year — as well as an extra 4 percent tax on incomes over $5 million. Like Obama, she also proposes limiting tax deductions for the very wealthy, to ensure they pay what she calls their "fair share":

"This is not because we resent success," Clinton said at the Democratic National Convention in July. "But when more than 90 percent of the gains have gone to the top 1 percent, that's where the money is. And we are going to follow the money."

Who benefits? Who pays?

Trump describes his plan as an across-the-board tax cut, but those at the top of the income ladder would see the biggest savings. Analysis of a similar plan from House Republicans by the conservative Tax Foundation estimated it would cut the tax bill of top earners by 5.3 percent, while taxpayers overall save less than 1 percent, all else being equal. (However, the foundation estimated that economic growth spurred by the tax cuts would boost income for all taxpayers.)

Under Clinton's plan, three-quarters of the additional taxes would be paid by those in the top 1 percent of the income scale, according to an analysis by the Tax Policy Center.

Help for the young and old

The candidates' dueling tax plans also offer carrots designed to encourage care for children and the elderly. Trump's plan offers a tax deduction for child care expenses. Like all tax deductions, that would be more valuable for wealthy families, who are taxed at a higher rate. But Trump has also talked about offering a deduction on payroll taxes, which would help a much broader cross-section of workers. At the other end of the age-spectrum, Clinton has proposed a tax credit for those caring for elderly relatives.

Trump released more information about his plan Tuesday, which would allow parents to deduct the average cost of child care from their taxes. Individuals making more than $250,000 (or couples making more than $500,000) would not be eligible. He has also promised to guarantee six weeks of paid maternity leave. A Trump adviser told NPR that the plan would be funded in part through cracking down on unemployment insurance fraud, though that would still leave a sizable gap in how to pay for the overall plan.

A common interest in "carried interest"

Both Clinton and Trump want to do away with something called the "carried interest loophole" that allows wealthy hedge fund managers to pay taxes on their income at a discounted rate. Eliminating the loophole wouldn't generate that much revenue for the U.S. Treasury. But it's a potent political symbol, and a way for two New York-based politicians to look as though they're getting tough on Wall Street.

Trump wants to eliminate the "estate tax," which applies to inherited wealth, and which Republicans typically disparage as the "death tax." Clinton, on the other hand, would increase the estate tax rate — from 40 percent to 45 percent — and lower the threshold at which it kicks in, from $5.45 million (or $10.9 million for couples) to $3.5 million (and $7 million for couples). Even with the lower threshold, only about 4 in 1,000 families would be subject to the estate tax. Most families don't have to worry about the government claiming part of their inheritance. Two wealthy families that would: the Clintons and the Trumps.