Accessibility links
'Children Of The New World' Aims A Cautious Eye At Our Technological Future Alexander Weinstein's debut story collection is a harrowing vision of the near future as a place of both technological wonder and dysfunction — and a nuanced look at where humanity might be headed. 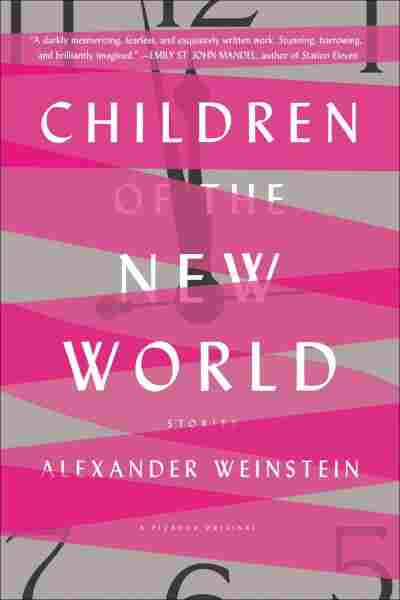 Children of the New World

Writing science fiction that's set in the near future can be tricky. Make your predictions too specific, and they run the risk of being rendered obsolete a generation after they're published. Make them too abstract, and they might not be as impactful in the here and now. Alexander Weinstein has a firm grip on this precarious dynamic in Children of the New World, his harrowing debut collection of short stories. In them, the future — not centuries away, but sometime within the next couple of decades — is a place of both technological wonders and societal dysfunction, eerily familiar yet jarringly alien.

The technology in Weinstein's stories isn't farfetched, and that makes it all the more frightening. In "Saying Goodbye to Yang," a young family is forced to confront the mortality of their robotic child at a time when most parents are opting to clone themselves; in "The Cartographers," the recreational implantation of false memories takes a chilling turn for a group of cyberneticists. And in "Openness," two young lovers are forced to confront their dependence on a new form of social media — which has become so pervasive, people no longer speak physically to each other without first requesting to access each other's "layers" online. Weinstein writes sensitively and with deceptive simplicity, slicing into the emotional core of his haunted, self-estranged characters. The more they connect via technology, the less connected they feel.

Although each story in Children takes place in some imaginary tomorrow, not all of them traffic in high-tech issues such as cloning or cybernetics. "Heartland" and "Ice Age" present two very different dystopias-in-progress; in both, technology no longer plays a central role in life, thanks to climate change that has rendered the world either a topsoil-stripped wasteland or a glacier-covered tundra. Instead of degenerating into chaos, though, America crawls on — only Weinstein uses these hopeless scenarios to illuminate how humans struggle to resist the darkest forces of their nature. And he does so through the quiet inner monologues of desperate people, as well as the telling details of their surroundings, from a discarded iPhone used as a baby's teething toy to the barren treetops sticking out of layers and layers of ice.

The technology in Weinstein's stories isn't farfetched, and that makes it all the more frightening.

Fittingly, Children deals extensively with the idea of parenthood, and in particular, what it's like to raise children amid accelerating social change and existential uncertainty. "Saying Goodbye to Yang" explores its basic, Pinocchio-like premise with dimension and tenderness, subtly folding in themes of privilege and xenophobia; "Migration" is a far edgier examination of a family's weakening bonds in an age when virtual reality has turned intimacy into a relic of a sentimental past (and sex between consenting adults into something straight out of a body-horror film). The most overtly shocking story in the book is also its dreamiest; in the brief "Rocket Night," an annual gathering of a small community spells a bizarre, terrifying fate for an unlucky chosen child.

As exquisitely written as it is, "Rocket Night" is the weak spot in an otherwise solid set. It comes across like a corny pastiche of Shirley Jackson's "The Lottery" mixed with any number of Ray Bradbury stories. Worse than that, its fuzzy fabulism doesn't mesh with the rest of the book's tightly wound depictions of future shock. Even the collection's two unconventionally formatted stories — "Excerpts from The New World Authorized Dictionary" and "A Brief History of the Failed Revolution," both of which read like snippets of reference sources rather than narratives — provide rich insight into the strange world Weinstein has built.

And it is indeed one world. While these 13 stories may not literally take place in the same futuristic timeline, certain common questions run through them. How do we locate the ever-shifting goalposts of normalcy, especially in a world where technological innovation seems to outpace almost every other human process — including our ability to process the new ways of seeing ourselves that technology can bring? And as we grope to find our place in this morphing moral landscape, will we become monsters? If so, will it happen so gradually that we won't even notice? Rather than being strictly pessimistic, though, Children of the New World is a nuanced and complex vision of where we as a species might be going — and how, for better and for worse, we're already there.