Accessibility links
Can Hillary Clinton Defeat Donald Trump In Traditionally Republican Arizona This Year? The last time Arizona voters picked a Democrat for president was two decades ago to re-elect Bill Clinton in 1996. Before that, it was 1948 when Harry Truman was on the ballot. 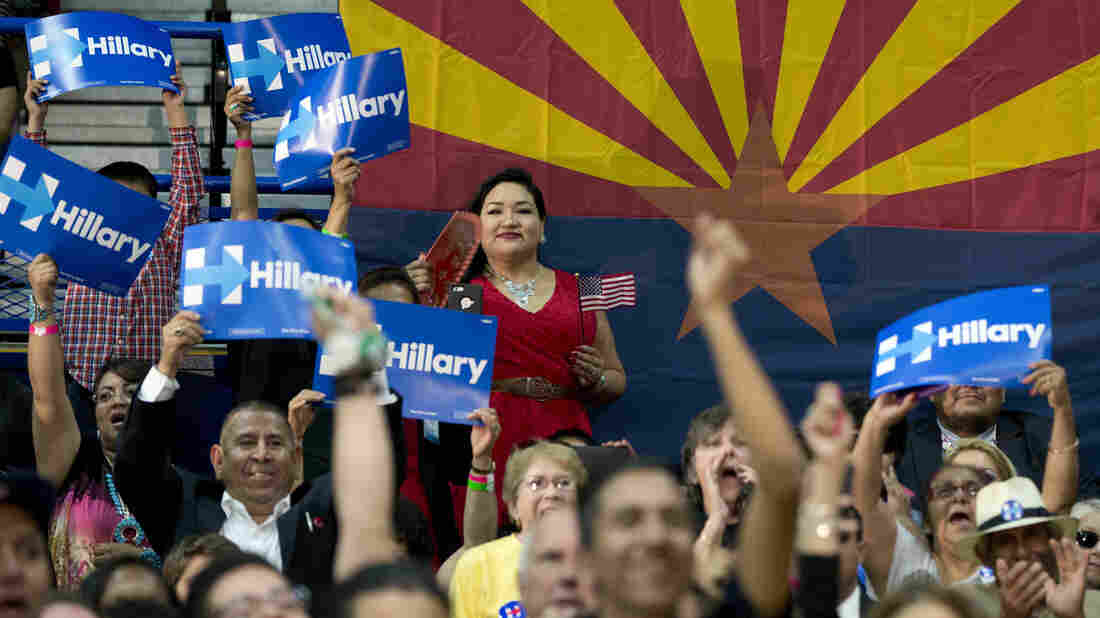 People in the audience cheer as Democratic presidential candidate Hillary Clinton speaks during a campaign event at a high school in Phoenix in March 2016 ahead of the Arizona primary. Carolyn Kaster/AP hide caption 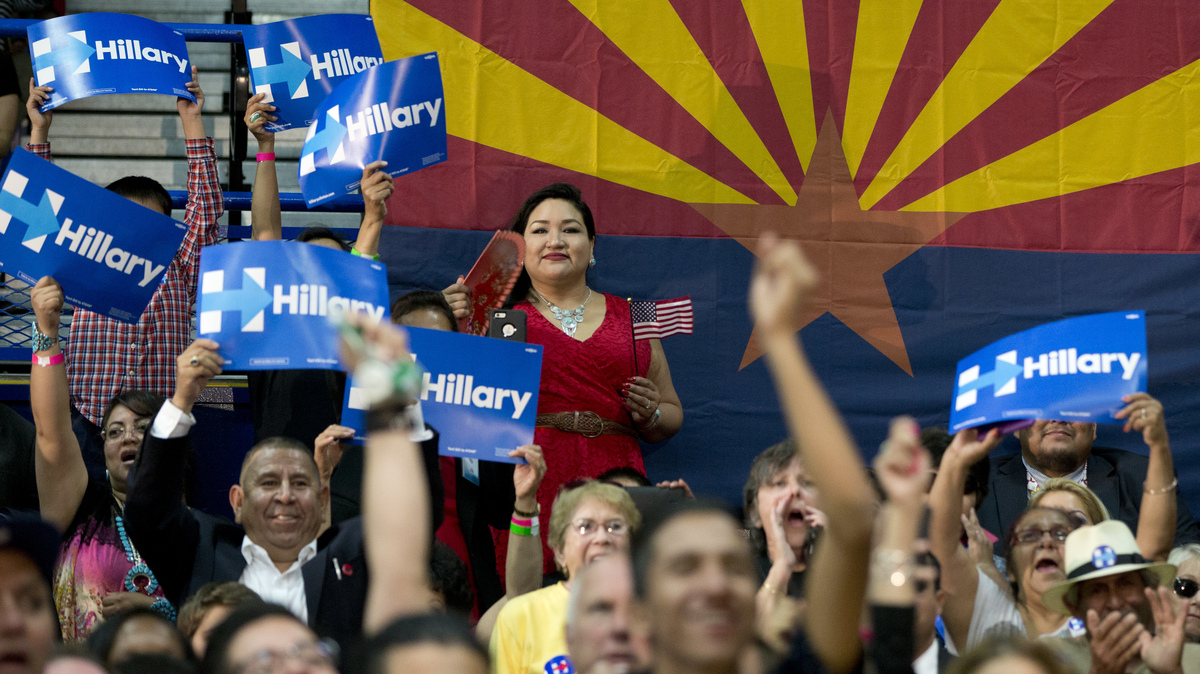 People in the audience cheer as Democratic presidential candidate Hillary Clinton speaks during a campaign event at a high school in Phoenix in March 2016 ahead of the Arizona primary.

The last time Arizona voters picked a Democrat for president was two decades ago to re-elect Bill Clinton in 1996. To find another example, you have to go back even further to 1948 when Harry Truman was running for president.

But now that the Hillary Clinton campaign has started investing in the state, it raises the question: Is Arizona actually a swing state this year?

Arizona Democrats would like to believe so. They are encouraged by a growing Latino vote that opposes Donald Trump and by polls suggesting a much tighter race than in years past. A recent Arizona Republic/Morrison/Cronkite News poll found Clinton leading by 1.6 percentage points among likely voters, with nearly 23 percent undecided. Other polls also show a tight race: A recent NBC News/WSJ/Marist poll showed Trump with a 1-point lead over Clinton among likely voters.

Ballot initiatives to legalize marijuana and raise the minimum wage and a close Senate race could also boost Democratic turnout in this traditionally Republican state.

Democrats "coming out from under the rocks"

On a recent Saturday in Prescott, a pair of volunteers from the Democratic Party canvassed a peaceful residential neighborhood shaded by tall pines. They asked voters how they were leaning for the presidential and Senate races and told them Arizona had a shot at voting for a Democratic presidential candidate this year.

When independent voter Dawn Klekner came to the door, she confided she feels alienated from the dominant political views of the area.

"There are a lot of right-wing Republicans, a lot of hunters, a lot of gun owners," Klekner said. "They tend to base their decisions on those issues." 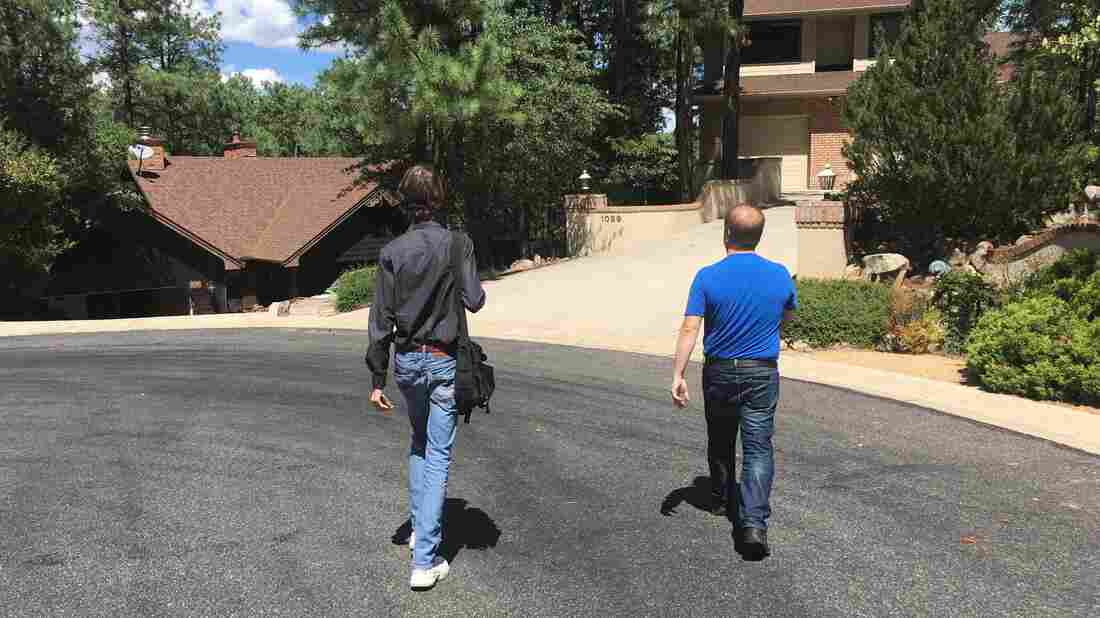 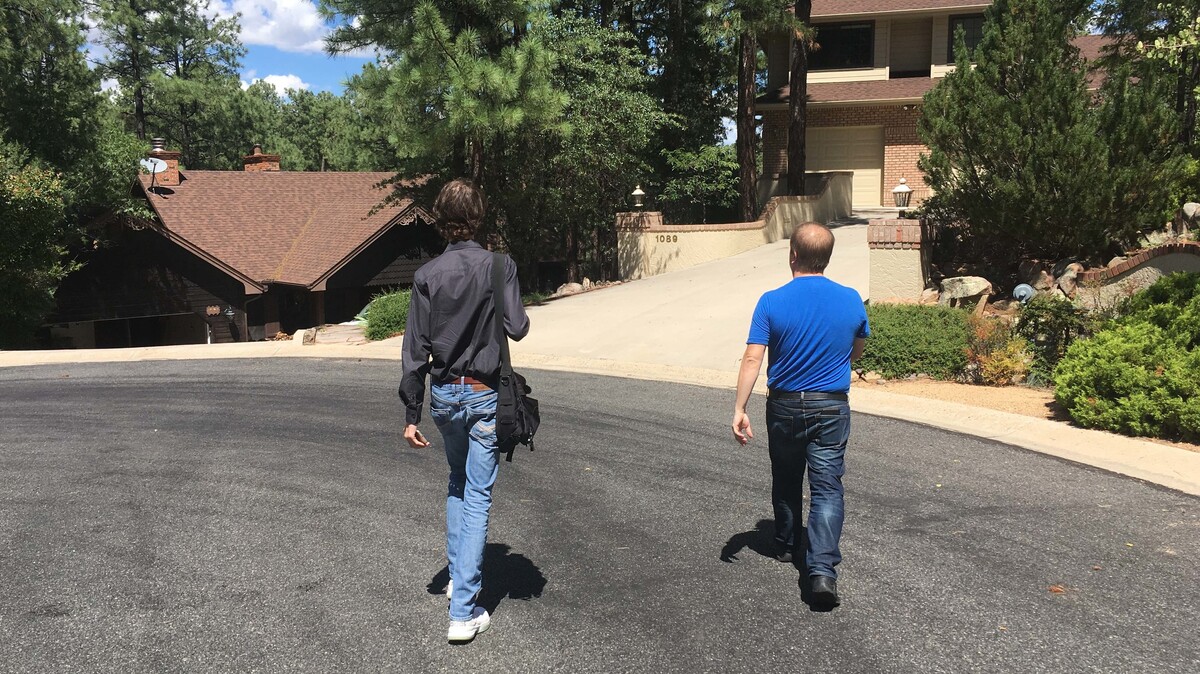 Prescott is the county seat for Yavapai County, a Republican stronghold. More than 64 percent of the county voted for Mitt Romney last election and Klekner said it is not necessarily a welcoming place for Democrats.

"I have people in my office saying, what are you registered as? And when you say independent they are a lot more nice," Klekner said. "I've heard other people say Democrat and they give them a stern stare."

Nevertheless, Democrats are making a hard push all over the state this year, even in places like Yavapai County where they have long been a quiet minority. The county has a dedicated Democratic field organizer this election season, Kari Hull.

"I make the joke of having Democrats coming out from under the rocks," said Hull, who grew up in Prescott and is raising her family there. "It's time, let's go! You know, let's all come together."

She said volunteers are phone-banking, canvassing and registering voters every day.

Hull is one of 160 paid Arizona Democratic Party staffers on the ground in the state working out of 27 field offices.

The party said it is the largest field operation it has had to date, and this year it has benefited from investments from the national party. 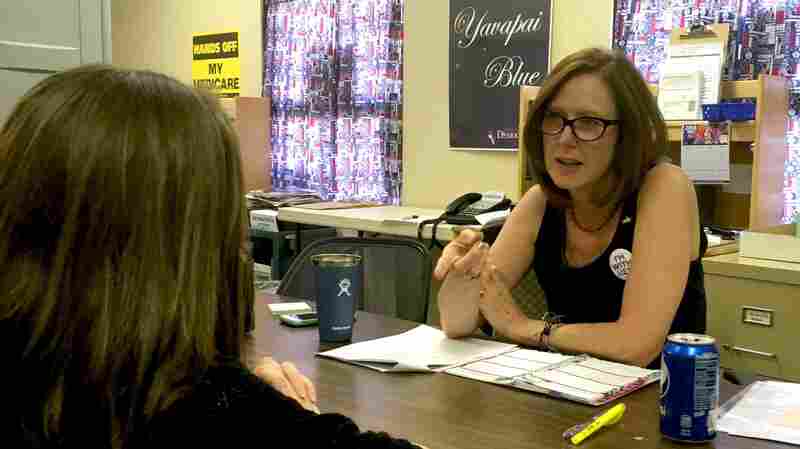 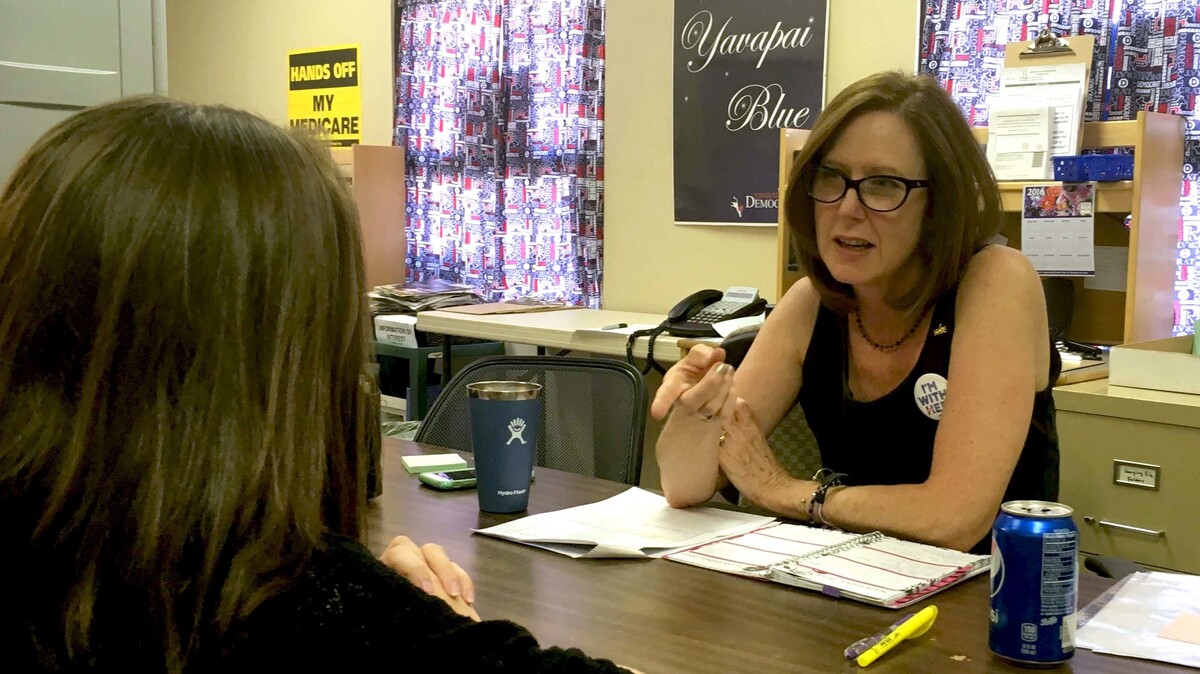 Kari Hull is a field organizer for the Arizona Democratic Party dedicated to Yavapai County, a Republican stronghold.

Field organizers say that while in years past the party prioritized getting out the vote in the state's competitive congressional districts, the additional staff this year is allowing Democrats to also target strongly Republican areas as well as predominantly Democratic districts where turnout could be boosted.

This month Clinton started airing TV ads in Arizona, and the Democratic National Committee announced a plan to expand its field operations in Arizona, Georgia and Utah.

"It's super exciting because everybody is talking about Arizona, Arizona," Hull said. "So it is like wow, there is hope for change. Maybe we can turn Arizona blue and we can help Hillary get elected and Arizona can be a part of it."

Statewide, Republicans outnumber Democrats 35 percent to 30 percent, accounting for a lead of nearly 166,000 more registered Republicans. But most of the rest of the state are independents, tallying in at more than 1.16 million voters.

"Arizona has been one of these states that national groups look at investing in and never quite get around to it," said Andy Barr, a Democratic consultant with Saguaro Strategies who is not working on this year's presidential race. "The big difference this year is the Clinton campaign has actually put money down."

Barr said Arizona isn't a key state for a Clinton victory. But it does present a promising opportunity for Democrats.

Arizona is one of these states that is on the cusp of changing. This election is really about trying to jump-start that process and move us ahead a few election cycles.

"Donald Trump is performing so poorly in so many traditional swing states that it has freed up a lot of resources for other places," Barr said.

By the same token, analysts agree it won't be surprising if Clinton stops investing in Arizona this year if her lead narrows in more important swing states.

But Barr says there is good reason for her to spend here.

"Arizona is one of these states that is on the cusp of changing," Barr said. "This election is really about trying to jump-start that process and move us ahead a few election cycles."

Meanwhile, Democrats aren't the only ones trying to get out the vote. At the Arizona Republican Party headquarters in Phoenix more than a dozen volunteers phone-banked for Donald Trump on a recent Tuesday evening.

But so far these phone banks are just once a week, and with fewer campaign field offices and paid staff compared with the Democrats. 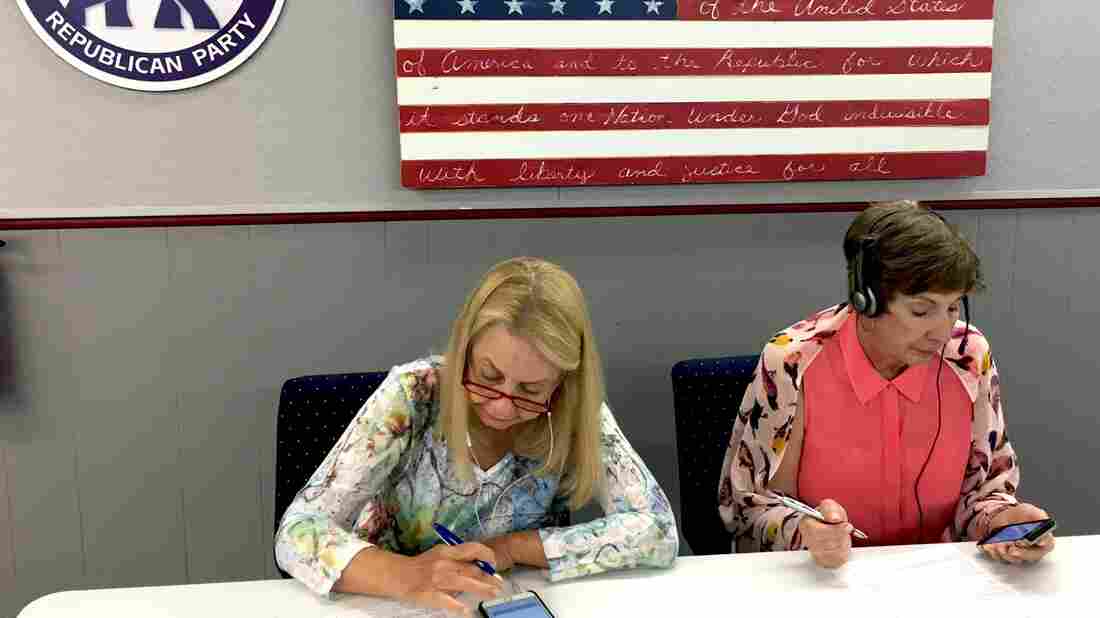 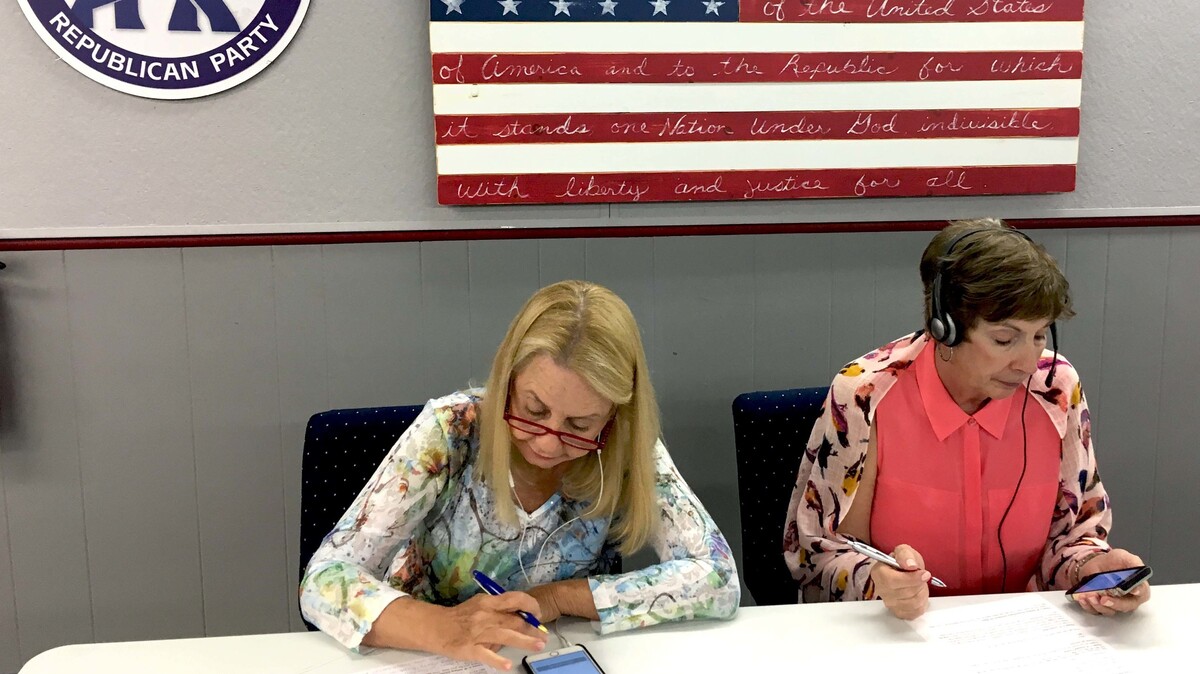 Arizona Republican Party spokesman Tim Sifert was unfazed to hear about that discrepancy.

"The Democrats have done so poorly in Arizona over the last 10 years it is only natural they would try to do something a little different," Sifert said. "And they are really going to have to step it up quite a bit."

Sifert said Democrats may have more money for the ground game, but Republicans have more registered voters and a volunteer army at the neighborhood level in the form of precinct committeemen.

As for Democrats' excitement over potentially swinging the state this year, Sifert called it "a false hope."

Still, Sifert does acknowledge elections can be unpredictable.

"We don't take anything for granted," he said.