Republicans and Democrats have moved further and further from each other over the past few decades. The result has been gridlock and partisan vitriol like many Americans have never seen in their lifetimes.

As it turns out, it's not just about beliefs: according to a new report from the Pew Research Center, "the two parties look less alike today than at any point over the last quarter-century."

Since 1992, the Democratic Party has grown more diverse, more educated and less religious, Pew finds. The Republican Party has undergone those changes to much lesser degrees, and at the same time has grown older.

Republicans have made gains across lots of groups, according to Pew's data, but interestingly, some of the biggest gains appear to be among groups that currently support Donald Trump. 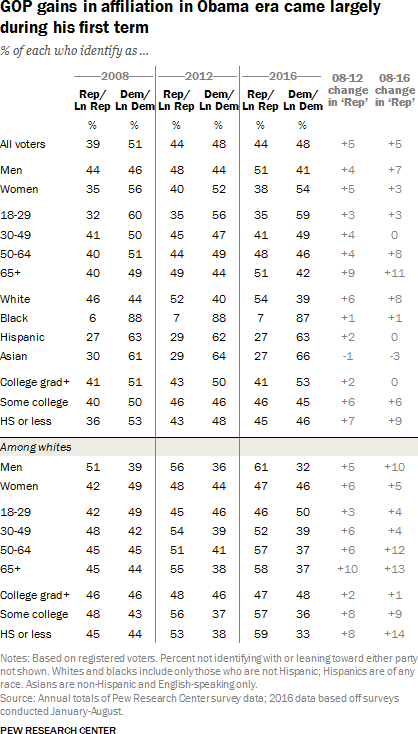 When Pew sliced the electorate into different demographic groups, they found that white men and white people without a college degree have made a remarkable recent swing from the Democratic Party to the Republican Party.

When President Obama took office, white Americans with a high school diploma or less education identified about equally as Democratic or Democratic-leaning and Republican and Republican-leaning. But since then, the share of people that identify as Republican or leaning Republican has jumped by 14 percentage points since 2008, from 45 to 59 percent. In comparison, the share of people who have some college or are college grads has grown by 9 points and 1 point, respectively.

Subdivide that even further, and white men without a college degree have swung particularly dramatically. In 1992, they identified as Democratic or Democratic-leaning by 7 points. Today, the gap is 38 points, in favor of Republicans. That's a 45-point swing over 24 years.

White women with a high school diploma or less have likewise moved far, but nowhere near the men. In 1992, they were 11 points in favor of Democrats. Today, they are 14 points in favor of Republicans, a 25-point swing that still manages to pale in comparison to the men's numbers. (The margin of error on these subgroups is different for each year, but it ranges between 2.2 and 4.8 altogether.)

At the same time, the share of people overall identifying as Republican or Republican-leaning has held relatively steady, and Democrats still have a slight edge.

A lot of energy has gone into determining what exactly is driving people with no college experience — and particularly men in that group — away from the Democratic Party both over time and during this election season. These data provide a glimpse of just how drastic that change has been.

For all that digging, there's not quite a clear answer. White men as a group have tended to vote more Republican in presidential races than many other groups. As for what's going on, that's tougher.

Some theories out there (some of them exploring "working-class" or "blue-collar" workers, who aren't exactly the same thing as non-college-educated men) include deep dissatisfaction among some whites connected to fast-growing death rates via suicide, drugs and alcohol, the decline in "blue-collar" jobs, and the perception that they are unfairly disadvantaged via policies like affirmative action.

One thing that's clear from these data is that white men's (and to a lesser extent women's) flight from the Democratic Party began before Trump was a national political figure. Many reports from the campaign trail have suggested that he is tapping into those voters' greatest concerns and fears.

However, one important caveat: It's not necessarily clear that Trump will do all that much better among these voters than Mitt Romney did. In recent polls, Trump's and Romney's support among white non-college voters has looked pretty similar, as NPR's Domenico Montanaro wrote recently. A recent CNN poll put Trump at 66 percent with white non-college grads. As Montanaro reported, Romney won 61 percent.

Democrats do well among fast-growing groups

Some of the fastest-growing groups — Hispanics and college-educated Americans — tend to be Democratic. As we said above, the Democratic Party is growing more and more educated, with college-age voters taking up a bigger and bigger slice of that party.

Meanwhile, the Republican Party is slowly but surely getting older. In 1992, 19 percent of Republican and Republican-leaning registered voters were 65 and older. Today, it's 25 percent. Meanwhile, voters 18-29 fell from 21 to 13 percent. And voters under 50 altogether fell from 61 percent to 42 percent. Here's what those changes have looked like over 24 years.

"One might speculate that people are aligning their party ID with their vote more so than they were before," says Ruy Teixeira, senior fellow at the left-leaning Center for American Progress, who has studied the white working-class vote closely.

This is also happening alongside growing polarization. It's possible that what's driving this is the "Big Sort" — the idea that Americans are living increasingly among people like them, which helps further entrench them in their worldviews and keeps them from other viewpoints.

So while Democrats may have a demographic advantage in fast-growing voter groups, the Big Sort could make governing all the harder. For that reason, Teixeira said, Hillary Clinton needs to still try to win over white, non-college voters right now — even if they are clearly in Trump's camp. Likewise, there is pressure on Trump to win over more nonwhite, college-educated, and women voters.

"It's not just about winning the election; it's about finding a way to govern," Teixeira added.

Update: This post was updated on Sept. 13 at 5:39 p.m. with new margin-of-error information.