Accessibility links
Hillary Clinton Will Resume Campaigning On Thursday With Clinton recovering at home from pneumonia after falling ill at a Sept. 11 memorial service on Sunday, her husband Bill Clinton and President Obama have been campaigning in her place. 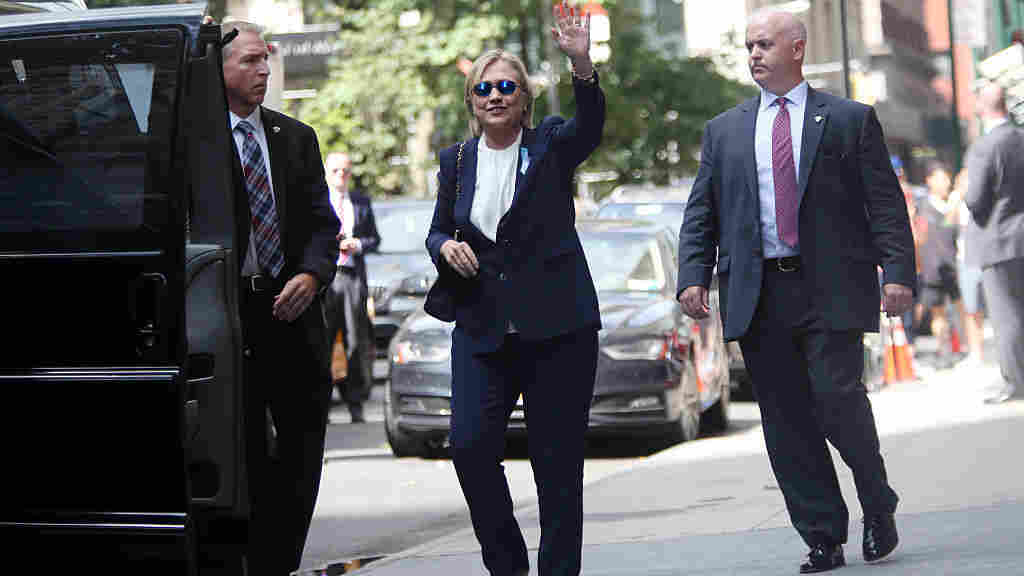 Hillary Clinton exits her daughter Chelsea Clinton's apartment on Sunday after she became sick at a Sept. 11 memorial service. Diagnosed with pneumonia, she had taken several days off the campaign trail to recover. Yana Paskova/The Washington Post/Getty Images hide caption 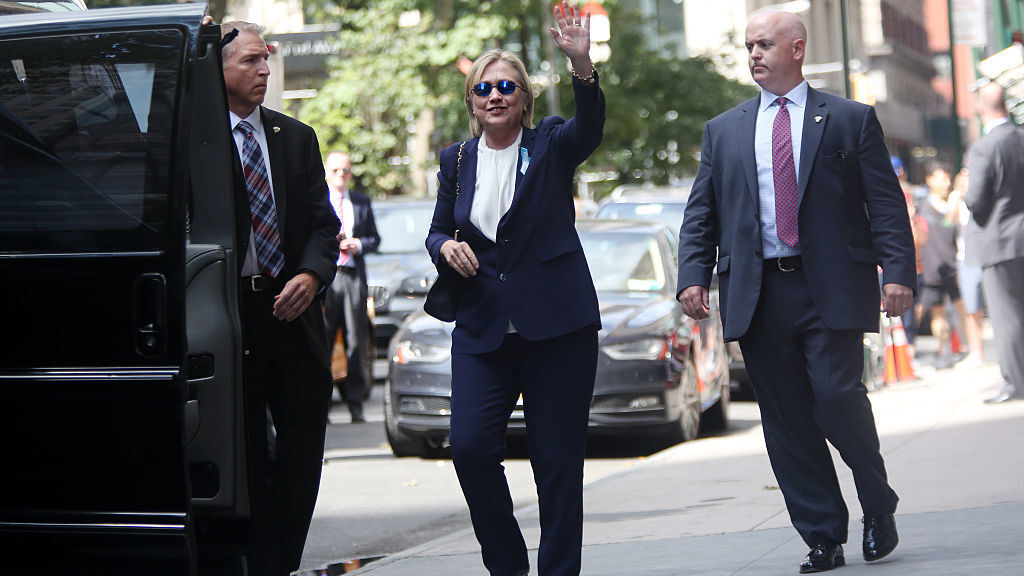 Hillary Clinton exits her daughter Chelsea Clinton's apartment on Sunday after she became sick at a Sept. 11 memorial service. Diagnosed with pneumonia, she had taken several days off the campaign trail to recover.

Hillary Clinton is set to return to the campaign trail on Thursday after taking a three-day hiatus to recover from pneumonia.

"Thanks very much for your continued patience today as [Clinton] remains home. She has spent the day catching up on reading briefings, making calls, and she watched President Obama's speech in Philadelphia on TV. We will resume campaign travel on Thursday, more details to come," the Democratic nominee's campaign told reporters in an email.

Clinton has not campaigned since Sunday, after she left a Sept. 11 memorial service after her campaign said she became overheated and dehydrated. A video later showed her losing her balance and being helped into a Secret Service van. Clinton went to her daughter, Chelsea's, nearby apartment and left without assistance about 90 minutes later. Her campaign later revealed she had been diagnosed with pneumonia on Friday.

Clinton has been resting at her home in Chappaqua, N.Y. In an interview with CNN's Anderson Cooper on Monday evening, Clinton said she was feeling "so much better" but admitted that "I should have gotten some rest sooner."

In her stead, Clinton's husband, former President Bill Clinton, was set to step in for his wife at a fundraiser in California and a campaign stop in Nevada. President Obama also campaigned for her today in Philadelphia.

Clinton's campaign also said it would release more information about her medical condition this week, which campaign spokesman Brian Fallon said would "put to rest any lingering concerns" about the 68-year-old's health.

Clinton's health has been under scrutiny, with many conspiracy theorists arguing she could be suffering from Parkinson's disease, cancer or another illness. Donald Trump has fueled some of those accusations, with the GOP nominee suggesting she "lacks the mental and physical stamina" to be president.

Trump surrogate and former New York City Mayor Rudy Giuliani went even further last month, falsely claiming that there are "several signs of a Clinton illness" and that the media "fails to point out several signs of illness by her. All you gotta do is go online."

Previously, Clinton has had diagnosed with blood clots, and in 2012 while she was secretary of state a blood clot was discovered in her brain while she was suffering from a concussion. She has since been given a clean bill of health.

Trump, 70, said he underwent a physical last week, and will reportedly reveal those Thursday on the Dr. Oz Show with controversial reality TV show Dr. Mehmet Oz. Trump's personal physician claimed last December that Trump would "be the healthiest individual ever elected to the presidency."