Accessibility links
100 Years In The Making, Black History And Culture Museum Gets Ready For Reveal The complicated history of how the National Museum of African American History and Culture finally moved from conversation to construction may be as compelling as the artifacts in its exhibits. 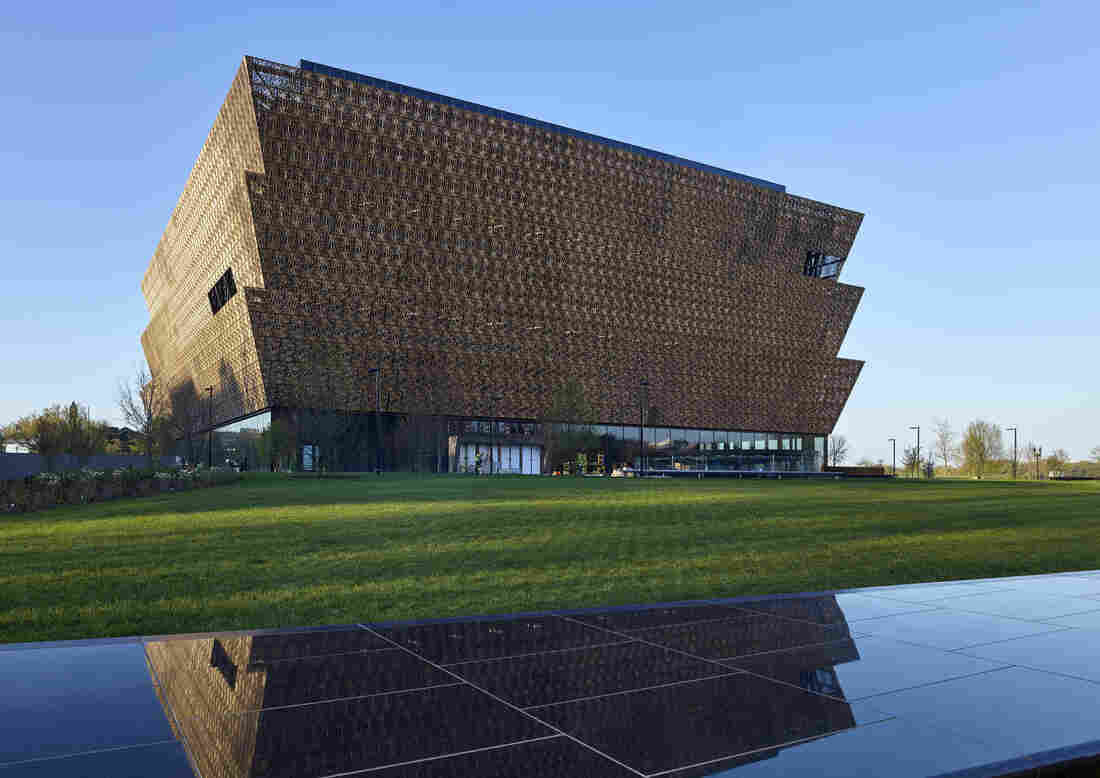 When it opens, the National Museum of African American History and Culture in Washington, D.C., will be the only national museum devoted exclusively to the documentation of African-American life, history and culture. Alan Karchmer for NMAAHC hide caption 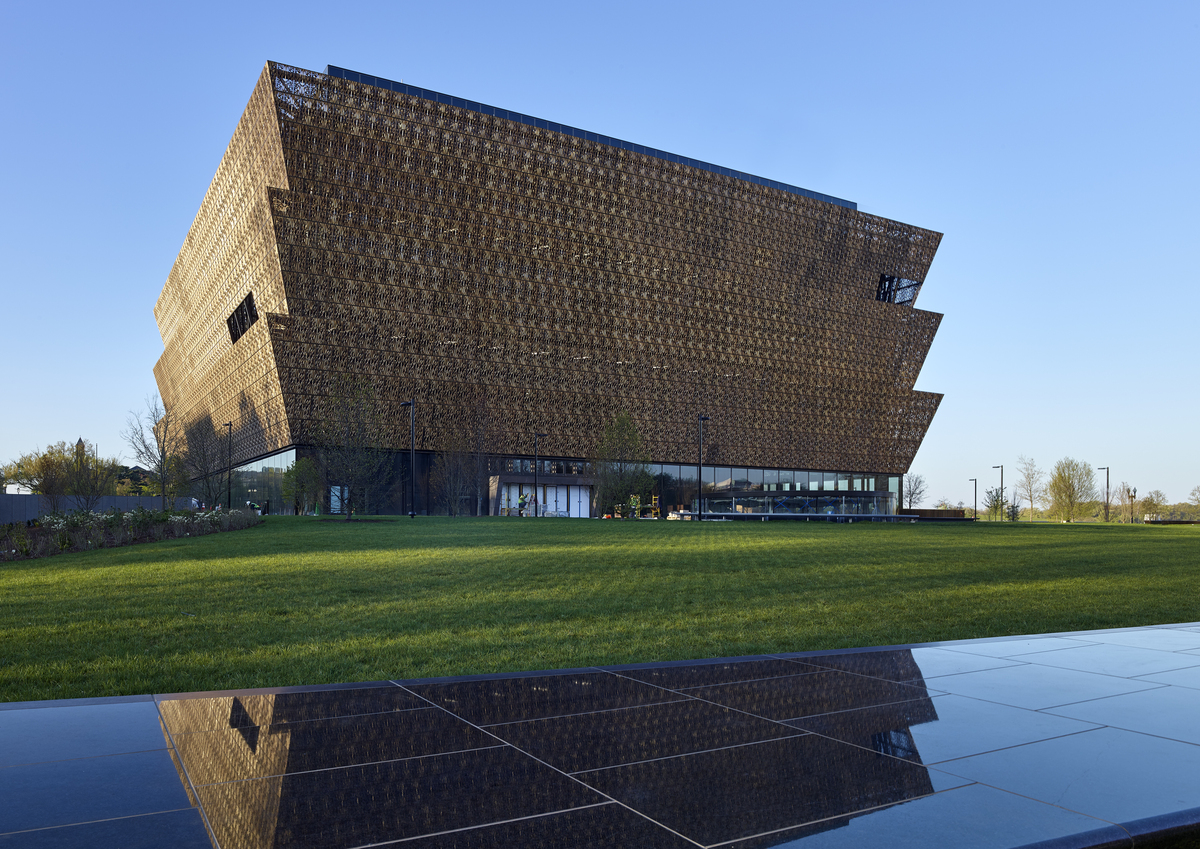 When it opens, the National Museum of African American History and Culture in Washington, D.C., will be the only national museum devoted exclusively to the documentation of African-American life, history and culture.

When peals ring out from a 130-year-old church bell at the Sept. 24 dedication ceremony for the National Museum of African American History and Culture, they will signal the end of a long journey.

The historic "Freedom Bell" usually hangs in Williamsburg, Va., in the tower of the First Baptist Church, which was founded by slaves. It started making its way to Washington, D.C., on Monday, according to The Associated Press, in order to herald this latest historical event.

"The connection between a congregation founded in 1776, the forging of First Baptist Church, the first black president opening the first national African-American museum, all of those dots are being connected," the Rev. Reginald Davis told WVEC.

But in truth, it took more than a few people, and a century's worth of starts and stops, to shift the museum from conversation to construction.

The idea of the museum was first proposed in 1915 by black veterans of the Civil War. A year later, Rep. Leonidas C. Dyer, R-Mo., introduced HR 18721, a bill that called for a commission to "secure plans and designs for a monument or memorial to the memory of the negro soldiers and sailors who fought in the wars of our country."

Three years later, Dyer — who also authored the 1918 Dyer Anti-Lynching bill — upped the ante and drafted a bill to erect an African-American monument in the capital. In Begin with the Past: Building the National Museum of African American History and Culture, author Mabel Wilson writes that Dyer's 1919 bill "sparked a round of discussions among the various committees overseeing federal land." There was even talk of building the memorial on the National Mall, but a decision on how to pay for it was put off.

In 1929, things looked hopeful again when Congress passed legislation establishing a commission charged with building an African-American memorial. But once again, no money was allocated for it — it was the Depression — and the project lost momentum.

The museum gained new champions during the civil rights era, but it wasn't until 1986 that Congress passed a joint resolution supporting private efforts to build it. The efforts inched forward in 1991 when a Smithsonian blue-ribbon commission pushed for creation of the museum, recommending that the iconic, red-brick Arts and Industries Building be its temporary home. But political squabbles over funding and a site location stymied that effort.

The arrival of the new millennium, however, seemed to bring with it new momentum to get the museum built. In 2003, Congress passed the National Museum of African American History and Culture Act, a bill making the museum part of the Smithsonian Institution.

"They took advantage of having the first African-American president, and of President Obama's legacy," Emmett Carson, president and chief executive of the Silicon Valley Community Foundation and an authority on African-American giving, told The Washington Post in May. 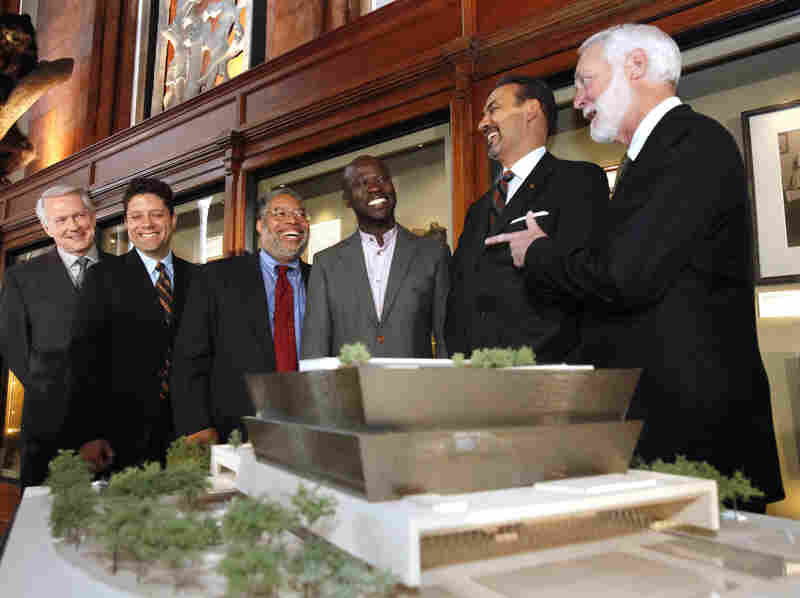 The Freelon Adjaye Bond/SmithGroup, which designed the winning concept for the National Museum of African American History and Culture, met with Smithsonian Institution members in April 2009. David Adjaye (third from right) and Phil Freelon (second from right) pulled ideas from cultural icons for their design. Jacquelyn Martin/AP hide caption 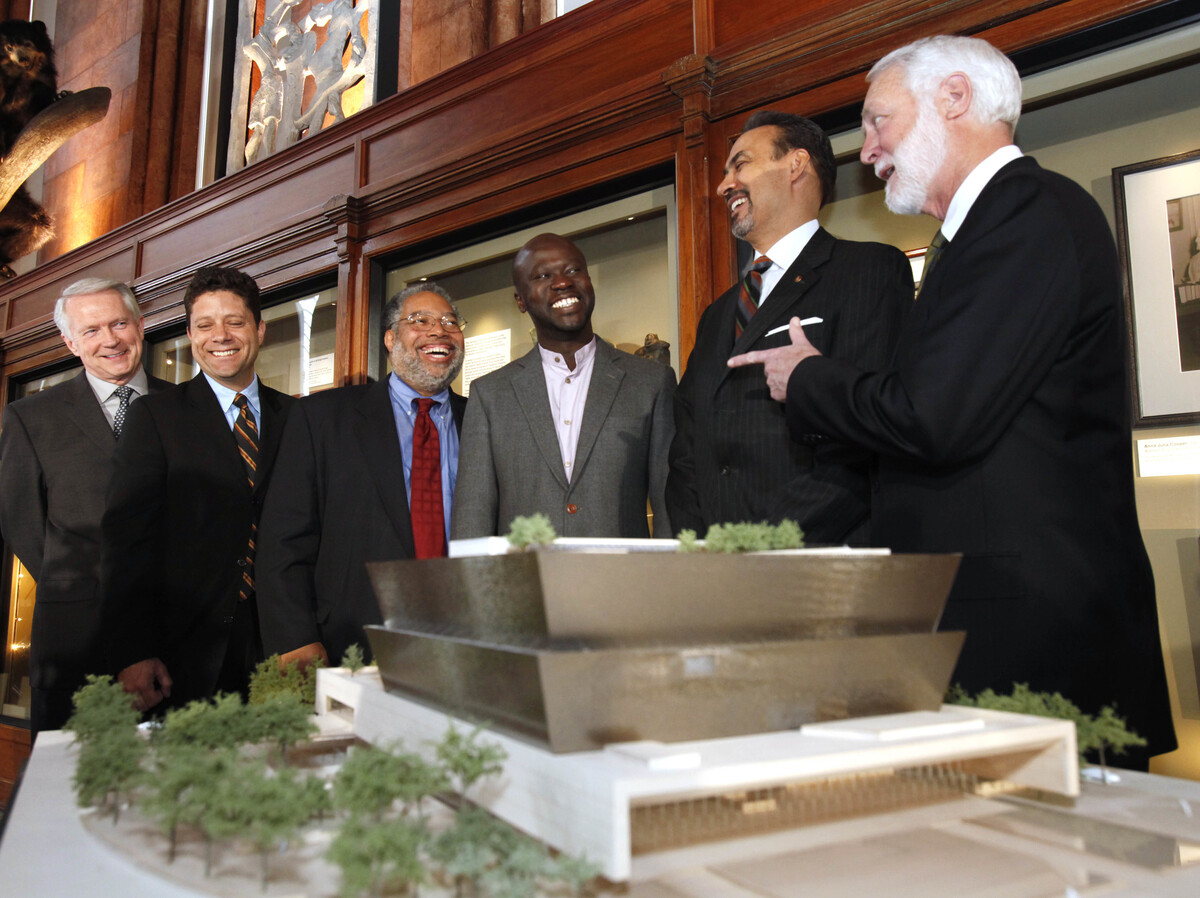 The Freelon Adjaye Bond/SmithGroup, which designed the winning concept for the National Museum of African American History and Culture, met with Smithsonian Institution members in April 2009. David Adjaye (third from right) and Phil Freelon (second from right) pulled ideas from cultural icons for their design.

The other pieces fell into place once the location was decided in 2006: an architecture design team selected in 2009, and finally, in February 2012, a groundbreaking.

"This day has been a long time coming," Obama said during the ceremony.

The building and collections

Today the 400,000-square-foot museum stands on the National Mall near the Washington Monument. The art of the Yoruba people, with origins in Nigeria and Benin, inspired its tiered facade.

In 2012, NPR's Melissa Block talked to Phil Freelon, architect of record for the project, who described other influences that led to its design.

"David Adjaye, our lead designer, came up with the idea of trying to link the building form to a cultural icon that was significant. There are other aspects of the design, for instance, the porch, which is, I think, more akin to what you see in America — not only in black culture but across the nation. And so it's really a blending of cultural icons that we think speak to the African-American culture."

The majority of the exhibition space is underground. On the bottom level, museumgoers will find themselves in literal and metaphorical darkness: slavery. Then, as they ascend, visitors move through exhibits exploring the Jim Crow era and the civil rights movement, until finally reaching light and joy — above-ground galleries devoted to culture, music, dance, literature.

"The Power of Place," an exhibition on the third floor, is about "the diversity of African-American history and culture across a wide expanse ... thematic, chronological and geographic," Paul Gardullo, one of the museum's curators, recently told NPR.

'Picturing Children' Shows More Than A Century Of African-American Childhoods

Some of the museum's more than 35,000 artifacts include slave shackles, a dress Rosa Parks made in the 1950s, Muhammad Ali's boxing headgear, and a circa 1918 charm featuring one of the founders of Alpha Kappa Alpha Sorority Inc., the first Greek-lettered organization for black women. (Full disclosure: I am a member of this sorority.)

In that 2012 NPR conversation, Freelon noted that the museum's contents wouldn't just focus on "well-known names."

"These facilities should express the ideals and vision of the everyday person. There were foot soldiers, if you will, of the civil rights movement that need to be commemorated. And often, those stories, because they're unfamiliar, are really quite interesting. And so our efforts to pull out the interesting stories goes beyond just the marquee names that we all know."

That method of organizing the vast collection — and the choices made for exhibits — seems to hew closely to a hope the president expressed back in 2012.

"I want [my daughters] to see how ordinary Americans can do extraordinary things," he said. "I want them to appreciate this museum, not just as a record of tragedy, but as a celebration of life."

In an earlier version of this story, Phil Freelon, the architect of record for the National Museum of African American History and Culture, was mistakenly referred to as Paul Freelon.