Accessibility links
Outdated FEMA Flood Maps Don't Account For Climate Change Flood managers suspect August's big rainstorms and floods in Louisiana are becoming more common there and elsewhere because of climate change. One clue: Much of the damage was beyond the flood plain. 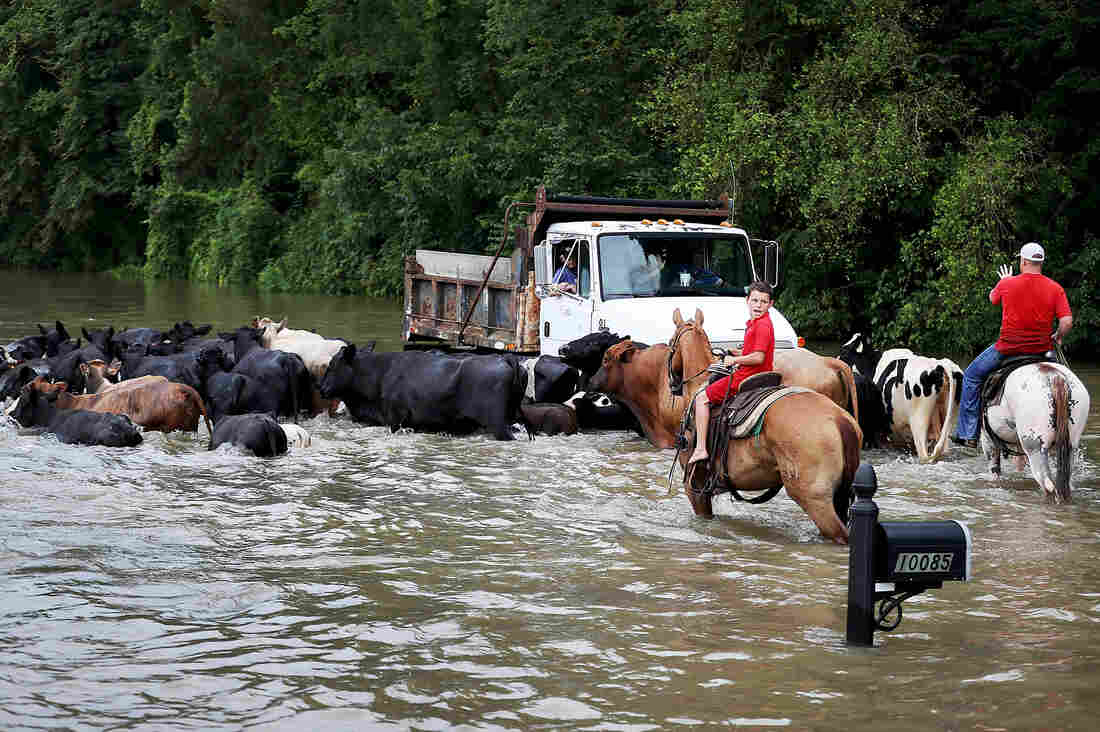 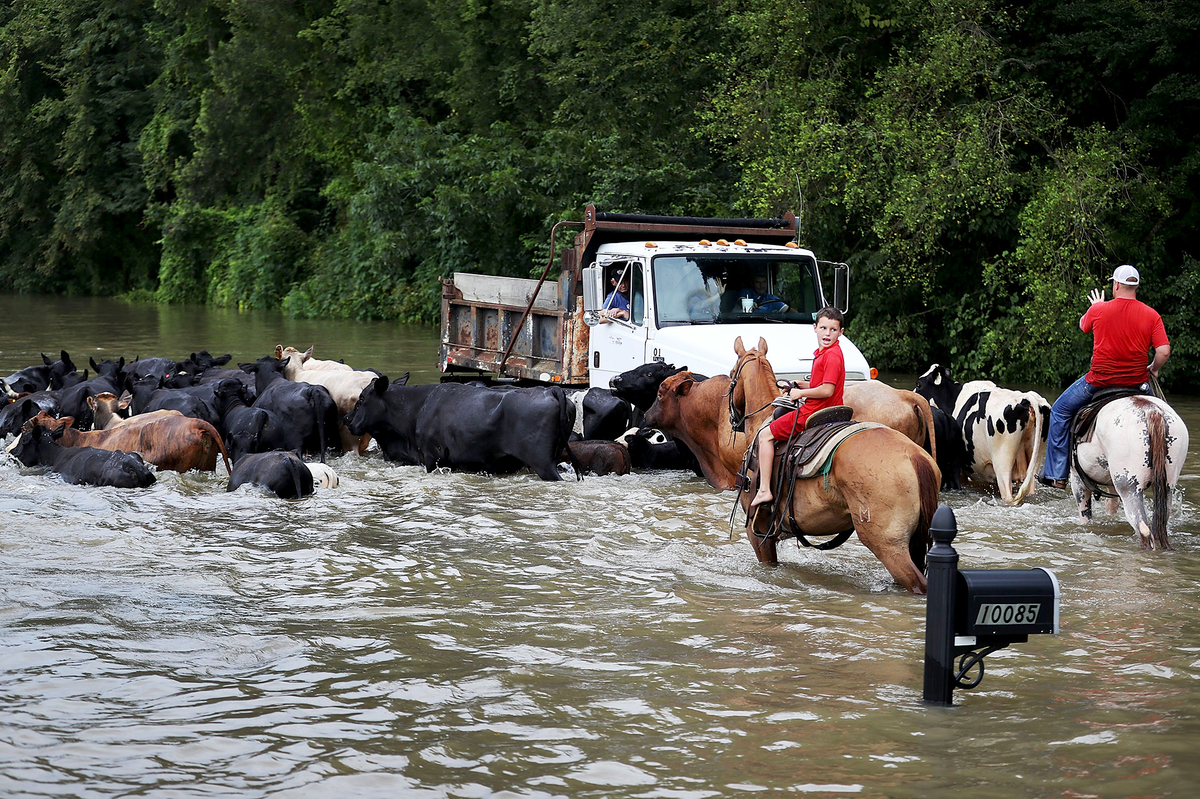 Cattle had to be driven through the waters of a flooded road and then trucked to higher ground on Aug. 16 in Sorrento, La. About a third of the flooding in the state last month occurred outside the local flood plain.

The floods that hit Louisiana last month were caused by rainfall that was unlike anything seen there in centuries. Most of the southern part of the state was drenched with up to 2 or 3 inches in an hour. A total of 31 inches fell just northeast of Baton Rouge in about three days; 20 parishes were declared federal disaster areas.

Climate scientists and flood managers suspect there could more like that to come — in Louisiana and in other parts of the country.

There have always been extraordinary rainstorms — storms stronger than anyone can remember. But Nicholas Pinter, a geologist at the University of California, Davis, who researches floods, says we shouldn't write these off as once-in-a-lifetime freak events.

"[In] our experience," Pinter says, "these kind of — call them 'acts of God explanations' — are served up just a little too easily." Sure, he says, amazing rainstorms do happen. But lately, big floods seem to be following storms more often.

"Hundred-year floods — floods of a magnitude that usually occur only once a century — [and] other large [weather] events are occurring bigger and more frequently than the published probabilities predict," Pinter says.

And some of those floods look different.

For example, satellite photos show that about a third of the flooding in Louisiana last month was outside the local flood plain. The flood plain is the area that historically gets inundated by a once-a-century flood.

Pinter says floods that occur outside the historical flood plain appear to be happening more often — in Louisiana and elsewhere.

"Maybe we're seeing a different character of flood event beginning to appear," he says. "More like a climate-driven flash flood event that's affecting these big river systems, which might be a new and different phenomenon that we need to throw into the statistics. Maybe."

A heavy rain, for example, that flashes down onto urban areas and just overwhelms sewers and drains might be this sort of event, he says. 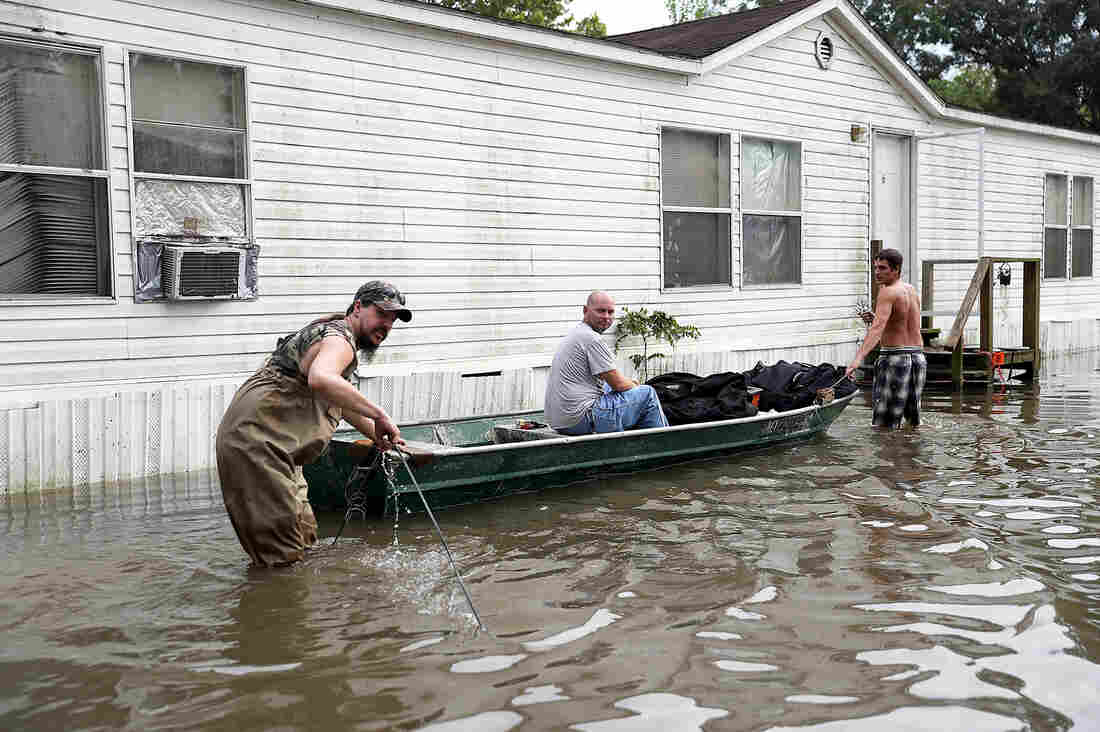 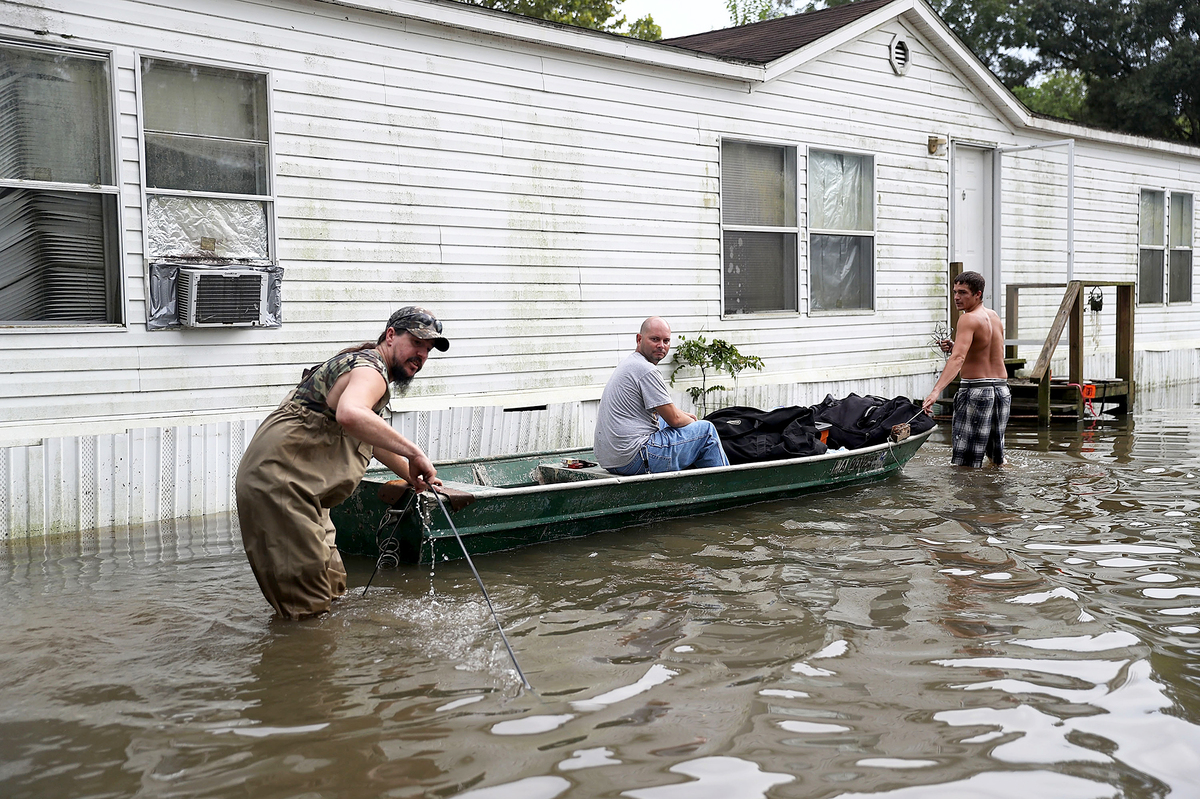 At this point, the evidence that the increasing floods is climate-related is still tentative, because you need a lot of storm data over many years to identify a trend. But Paul Osman, flood plain manager for the state of Illinois, is seeing changes too. Osman studies floods for the state and is charged with figuring out how to prepare for them. He calls these sudden floods that lie outside of flood zones "drainage events."

"We found that 90 percent of our damages in Illinois are not traditional overland flow damages (like a river overflowing its banks)," he says, "but rather heavy rainfall events that cause basements to back-fill with water."

Osman says a 2015 study by Illinois flood authorities found that between 2007 and 2014, almost all the flood damage in urban areas occurred outside the traditional flood plain.

This satellite map of Baton Rouge, La., shows the broad extent of the flooding that resulted from rainstorms in August 2016. The darker blue shows flood inundation on Aug. 14, compared to locations that more typically get flooded after a storm (shown in lighter blue). Mapped flood extent is likely an underestimate, due to cloud cover in the satellite imagery, the mappers say. The background image is from May 2016.

Osman says he suspects that's partly because the region is increasingly covered by concrete — shopping malls, parking lots and other impervious surfaces that lead to flash-flood runoff. But he says he and other flood plain managers are noticing a shift in rainfall patterns, as well.

"There's no doubt," Osman says. "All the scientific evidence points at those rainfalls, [which] are changing. We're having a lot more of these intense, short-duration storms that happen in relatively small geographic areas" — such as the regions recently affected in Louisiana.

That's consistent with what climate scientists have been predicting. A warmer atmosphere holds more water vapor and can create bigger, more intense storms. And the federal government's latest National Climate Assessment notes that average precipitation is up overall in the U.S., and points to particularly intense rainfall events in the Midwest and East.

Osman says many drainage systems can't handle these intense storms. "Most of those storm sewer designs were built on historic records and historic rainfall events that are no longer the case," he says.

If historic rainfall data no longer hold true, that's a problem for the Federal Emergency Management Agency. FEMA draws up maps that show where flood plains are. People with federally backed mortgages in the highest risk areas have to get flood insurance. People outside those areas don't.

Kathy Schaefer, an engineer who spent 10 years drawing those maps at FEMA, says those in use now don't take into account any rainfall changes that might have started to take place because of climate change.

"You had to ignore climate change [in drawing the maps]," she says. "All of the mapping had to be based on the existing conditions [at the time they were drawn, or many years earlier]." Those conditions were rainfall and flooding statistics from the past, she explains. Sometimes decades in the past.

Schaefer says local flood managers have begun to suspect that "existing conditions" are changing. But, until recently, anytime they came to Washington, D.C., looking for help to deal with those changes, they had to mince their words.

"They [couldn't] even use the words 'climate change,' " she says. "They call it a 'slow moving disaster,' which is sort of a code word for climate change."

Over the past couple of years, FEMA has begun to consider climate change in its flood analyses, Schaefer says. An executive order from the White House now requires it, and the agency is also proposing new operating procedures that require research into the effects of climate change on flooding.

But there's a time-lag problem: FEMA only updates its insurance flood maps every five years. Climate scientists fear that the weather may be changing faster than that.