Accessibility links
Donald Trump's Economic Plan Sets Goal Of 4 Percent Growth The candidate also predicted that his economic plan will deliver up to 25 million new jobs over the next decade, describing it as pro-growth, pro-jobs and pro-family. 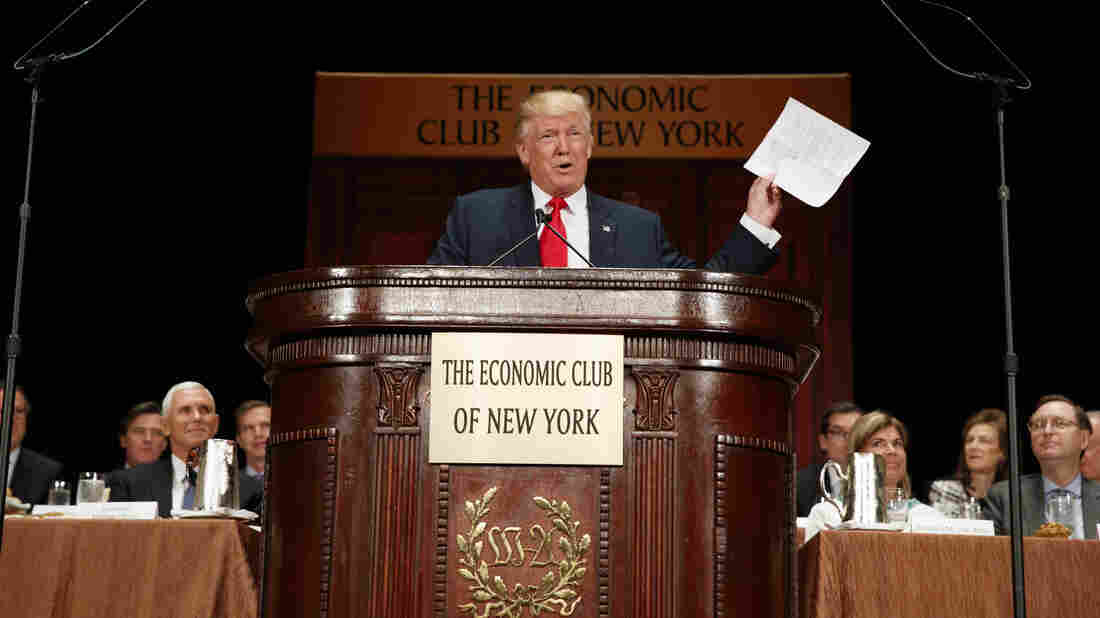 Donald Trump holds up notes as he speaks to the Economic Club of New York on Thursday. Evan Vucci/AP hide caption 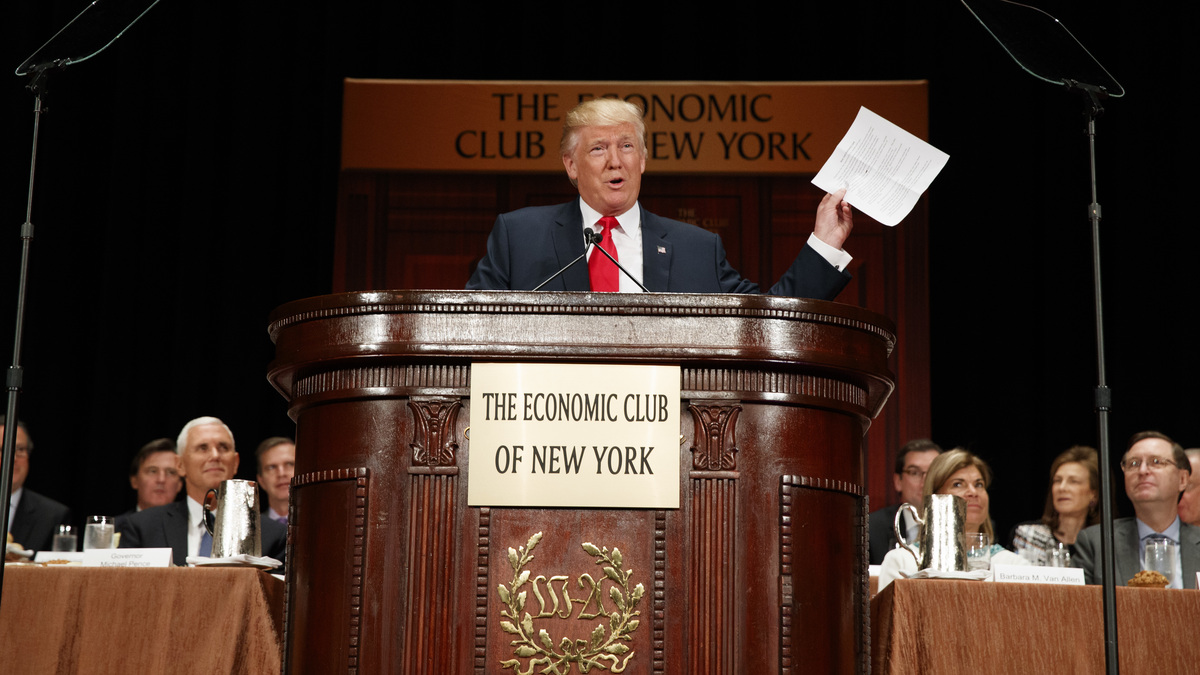 Donald Trump holds up notes as he speaks to the Economic Club of New York on Thursday.

Republican presidential hopeful Donald Trump offered a bold prediction Thursday that his economic plan will deliver up to 25 million new jobs over the next decade. He described the blueprint as "the most pro-growth, pro-jobs, pro-family plan put forth perhaps in the history of our country."

Trump's projections are based on rosy forecasts of the job gains that would result from tax cuts and reduced regulation. He set a goal of 4 percent annual economic growth. And he says that under his plan the U.S. would achieve a minimum of 3.5 percent annual growth over 10 years. The U.S. has achieved that growth rate only once in the past 15 years.

Speaking to the New York Economic Club, Trump also called for cuts to federal spending, which he says would save the government up to a trillion dollars over the next decade. His proposal would shave 1 percent off the government's discretionary, nondefense spending each year. But since he's excluding programs such as Social Security and Medicare, the cuts would affect only about 16 percent of the total federal budget.

"This is more than just tinkering," said Maya MacGuineas, president of the Committee for a Responsible Federal Budget. "Achieving those savings will require more than just finding efficiencies. It will require tough choices over which programs to scale back and it still leaves the most problematic parts of the budget untouched."

Trump is counting on savings from the spending cuts to help offset the revenue loss from his tax cuts, in order to avoid increasing the deficit. Like his jobs target, the pledge of deficit neutrality is based on aggressive projections about the resulting economic growth.

"Certainly we should put in place policies that will help grow the economy but this is relying on heroic assumptions," MacGuineas said. If growth fails to meet those rosy targets, the result would be trillions of dollars in additional debt.

The Trump campaign also released new details about the candidate's tax plan that could make it less favorable to wealthy taxpayers. Trump wants to cap tax deductions at $100,000 for single filers and $200,000 for married couples. That could offset some savings that wealthy taxpayers would get from cutting the top tax rate from 39.6 to 33 percent.

"The tax relief will be concentrated on the working and middle-class taxpayers," Trump said. "They will receive the biggest benefit and it won't even be close."

A review by the conservative Tax Foundation of a similar plan put forward by House Republicans found wealthy taxpayers get the biggest break from reduced rates. But the cap on deductions in Trump's plan could alter that arithmetic. Families living in high-tax states with high real-estate prices would be among those most affected by limiting tax deductions.

Trump also renewed his promise to boost domestic energy production and reduce regulations such as President Obama's Clean Power Plan. And he vowed to renegotiate trade deals. An analysis by Moody's Analytics released in June projected that Trump's trade policies would raise consumer prices in the United States and reduce exports. (The lead author of the Moody's report, Mark Zandi, has contributed the maximum $2,700 to Hillary Clinton's campaign.)