Accessibility links
America's First Black President Nears The End Of A History-Making Run Eight years after Obama made history as the first African-American president, his legacy is just starting to emerge. 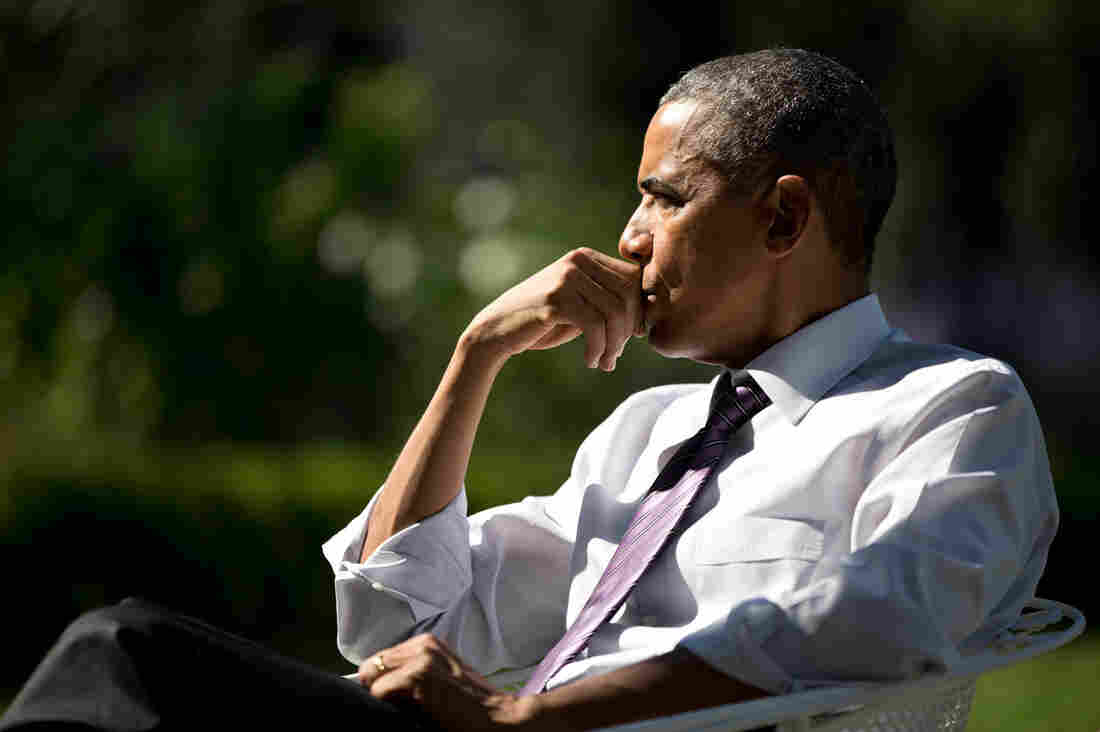 The president listens during a meeting with staff in the Rose Garden on Oct. 8, 2014. Pete Souza/The White House hide caption

Jordan Weaver was just a kid when Barack Obama was elected eight years ago. But she'll never forget that November night.

"My biggest memory is us in my living room," said Weaver, who grew up in Harrisburg, Penn. "My mom was crying. She was so happy that a president could be African-American and people accepted him. You could just see that everyone was so excited."

Eight years later, Weaver joined thousands of people who turned out to see Obama speak in Philadelphia earlier this week.

At Democratic Convention, Obama To Rally For Clinton — And His Own Legacy

"I don't think people give him enough credit, but I love him," Weaver, now a student at Temple University, said.

Jamie Littles brought her young son to the outdoor rally near Philadelphia's Museum of Art so he could see the president for himself.

"Just so he can get a better understanding of who Obama is and what he means in history for black Americans," Littles said.

For Chuck Coleman, as well, it means a lot.

"For me as an African-American male, it's just a proud moment," said Coleman. "To see him serve and to raise our country to a level he was able to perform."

Coleman paused, though, and cleared his throat when asked how his own life has changed during Obama's been in office.

"To be perfectly honest with you, I don't think any one person can change all the conditions in this country. He's done the best that he can do under the circumstances," Coleman said. 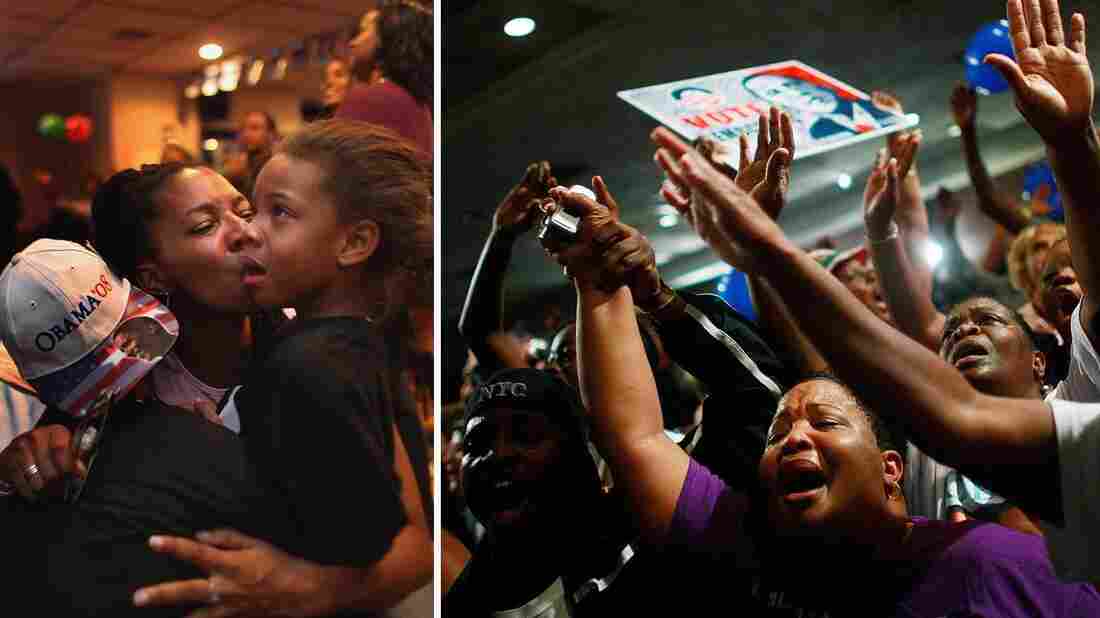 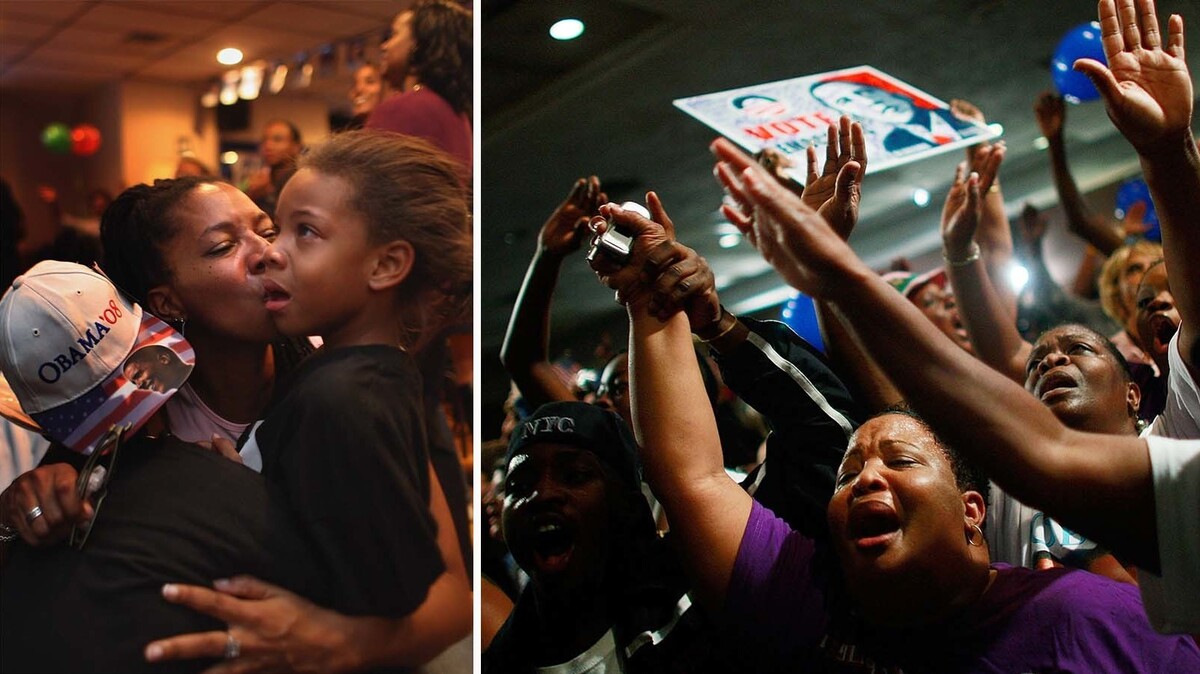 A number of people at the rally cited the Affordable Care Act as an example of tangible ways in which their lives have improved under Obama.

"I didn't have insurance and now I have insurance, because I had pre-existing issues," said Nicky Robertson. "So now I'm thankful. Thank Barack."

Obamacare has pushed the rate of health insurance in the United States to record highs. And African-Americans have seen some of the biggest gains.

To be perfectly honest with you, I don't think any one person can change all the conditions in this country. He's done the best that he can do under the circumstances.

But other measures are less encouraging. Black unemployment has come down since the worst of the recession but it still tops 8 percent, more than three percentage points above the national average. Homeownership rates for African-Americans have taken a hit. And while the average black family's income rose more than 4 percent last year, the income gap between African-American and white families is as wide today as it was four decades ago.

"Black America is like a caboose on a train," said Marc Morial, president of the National Urban League. "When the train speeds up, the caboose speeds up. But it's still the caboose."

Each year, the Urban League issues a report card on "The State of Black America" and Morial says it's clear Obama's presidency has not been "a panacea."

Donald Trump has tried to exploit lingering problems by urging African-Americans to switch their allegiance to the Republican Party.

"You're living in poverty. Your schools are no good. You have no jobs," Trump said last month at a rally in Dimondale, Mich. "What the hell do you have to lose?" 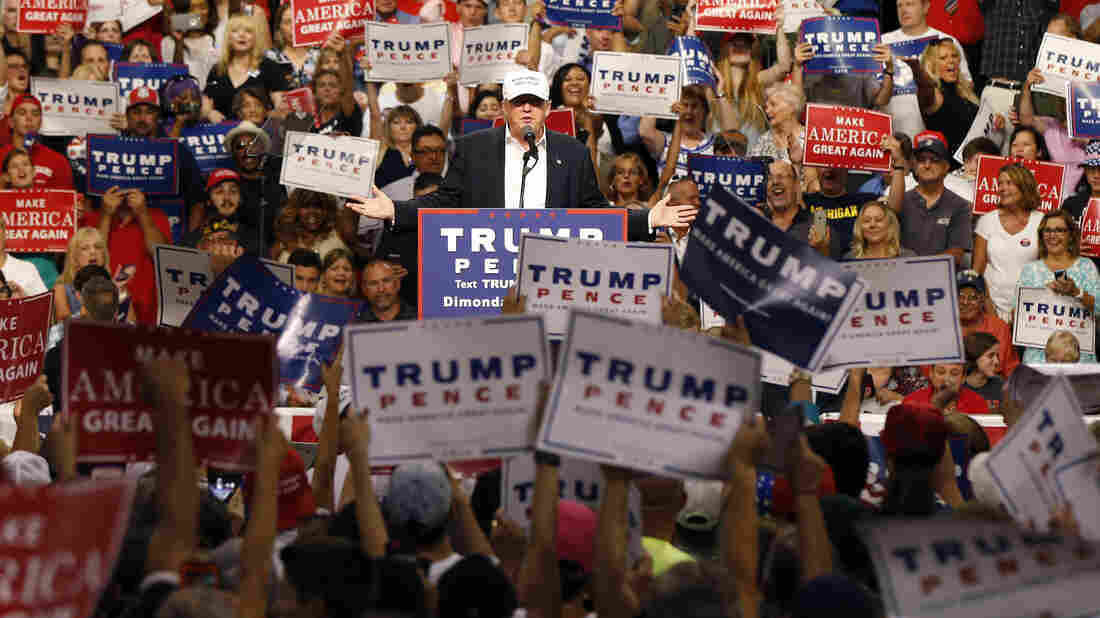 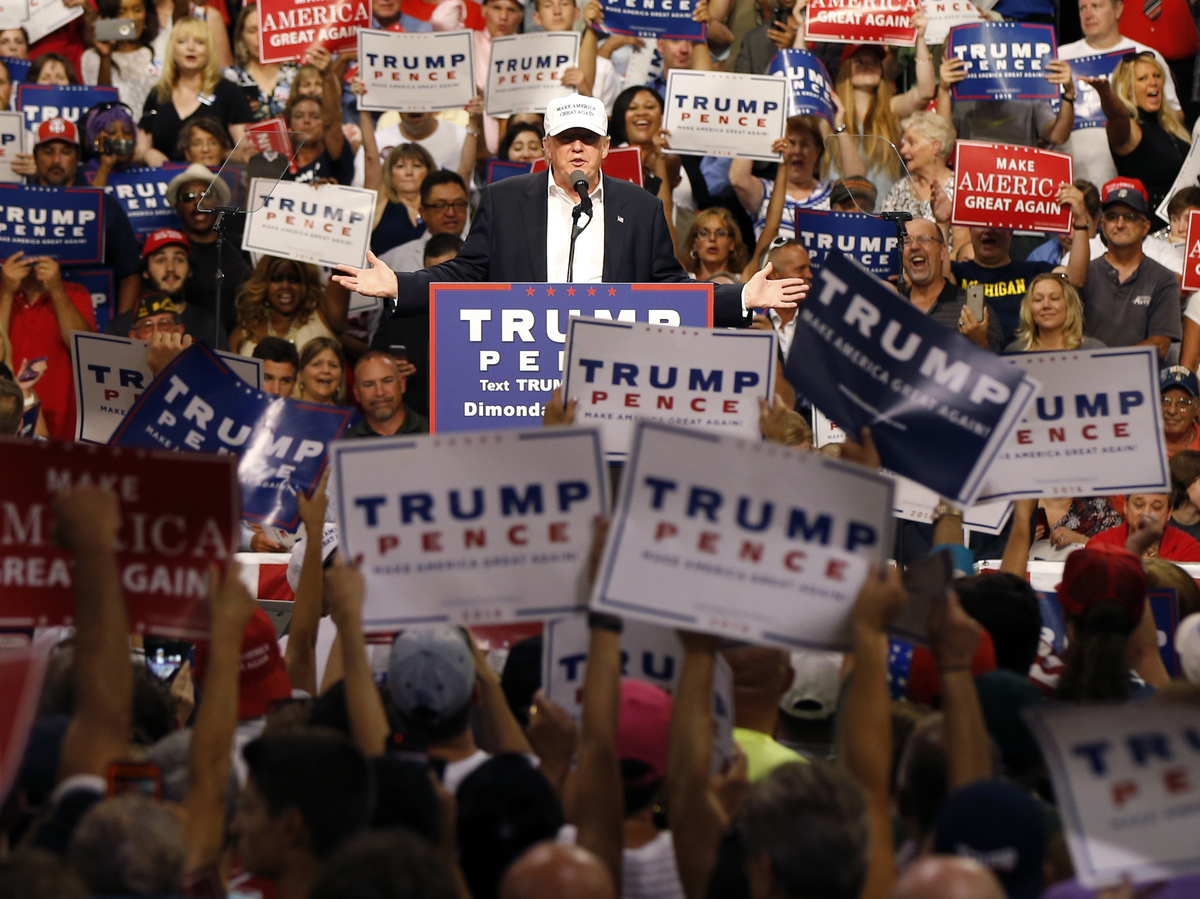 Morial said he would have liked to see more targeted help for African-Americans. He suggested a jobs bill Obama pushed in 2011 would have helped. But as often happened, Obama faced stiff resistance from congressional Republicans and a sizeable public backlash.

"It has also got to be said that Barack Obama's election spurred a negative reaction," Morial said. "The rise of the hard right, the Tea Party, the birther movement, to some extent the rise of Donald Trump."

Obama has tried to avoid any appearance of favoring African-Americans, telling Black Enterprise magazine, for example, he's not the president of black America but rather the United States. In his second term, though, Obama has sometimes served as a kind of ambassador, offering whites and others a window into the African-American experience.

"There are very few African-American men in this country who haven't had the experience of being followed when they were shopping in a department store," Obama said after the 2013 acquittal of George Zimmerman, a neighborhood watch volunteer in Florida who shot and killed 17-year-old African-American Trayvon Martin. "That includes me." 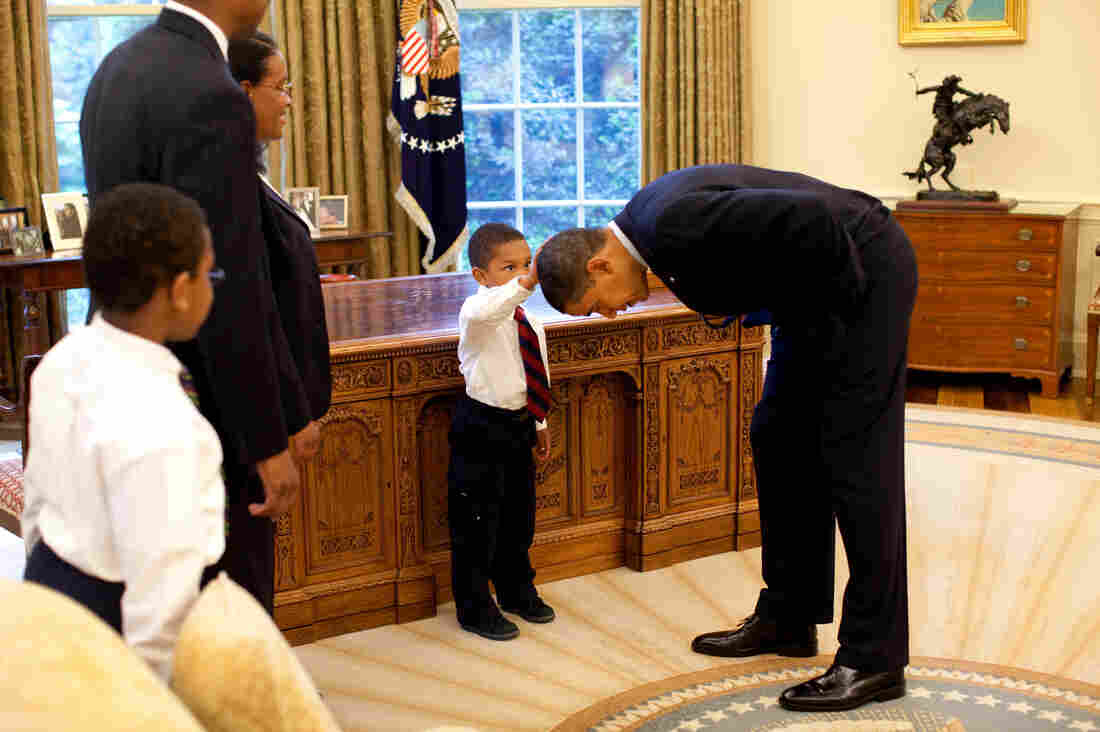 President Barack Obama bends over so the son of a White House staff member can pat his head during a visit to the Oval Office on May 8, 2009. Pete Souza/The White House hide caption 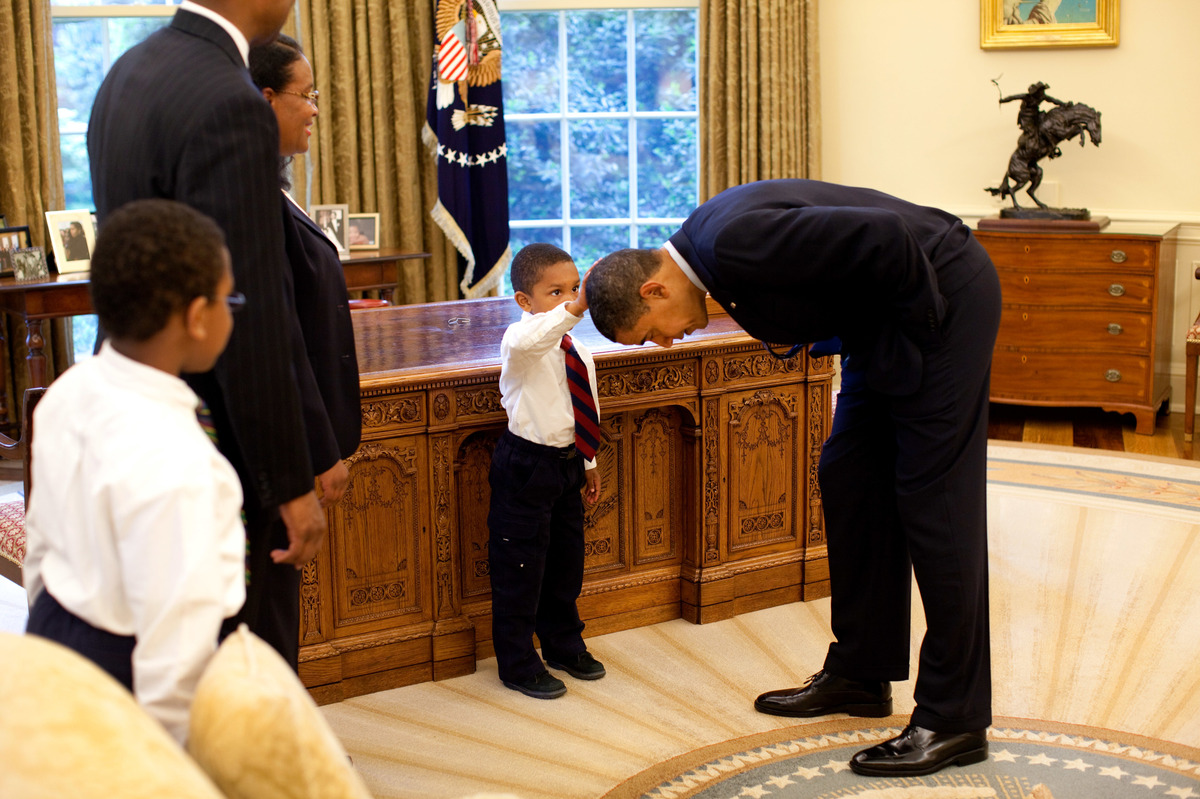 President Barack Obama bends over so the son of a White House staff member can pat his head during a visit to the Oval Office on May 8, 2009.

The effort to help young black men with the "My Brother's Keeper" initiative and the push to overhaul the criminal justice system will likely remain priorities for Obama long after he leaves the White House.

After nearly eight years, a black president is no longer a novelty. Most Americans have grown accustomed to it, even if not everyone is comfortable with it. So it's easy to lose sight of just how barrier-breaking Obama's election was. A comic roast for the president earlier this year offered a serious reminder.

"When I was a kid, I lived in a country where people couldn't accept a black quarterback," comedian Larry Wilmore recalled at the White House Correspondents' dinner in April. "Now think about that. A black man was thought by his mere color not good enough to lead a football team. And now to live in your time, Mr. President, when a black man can lead the entire free world."