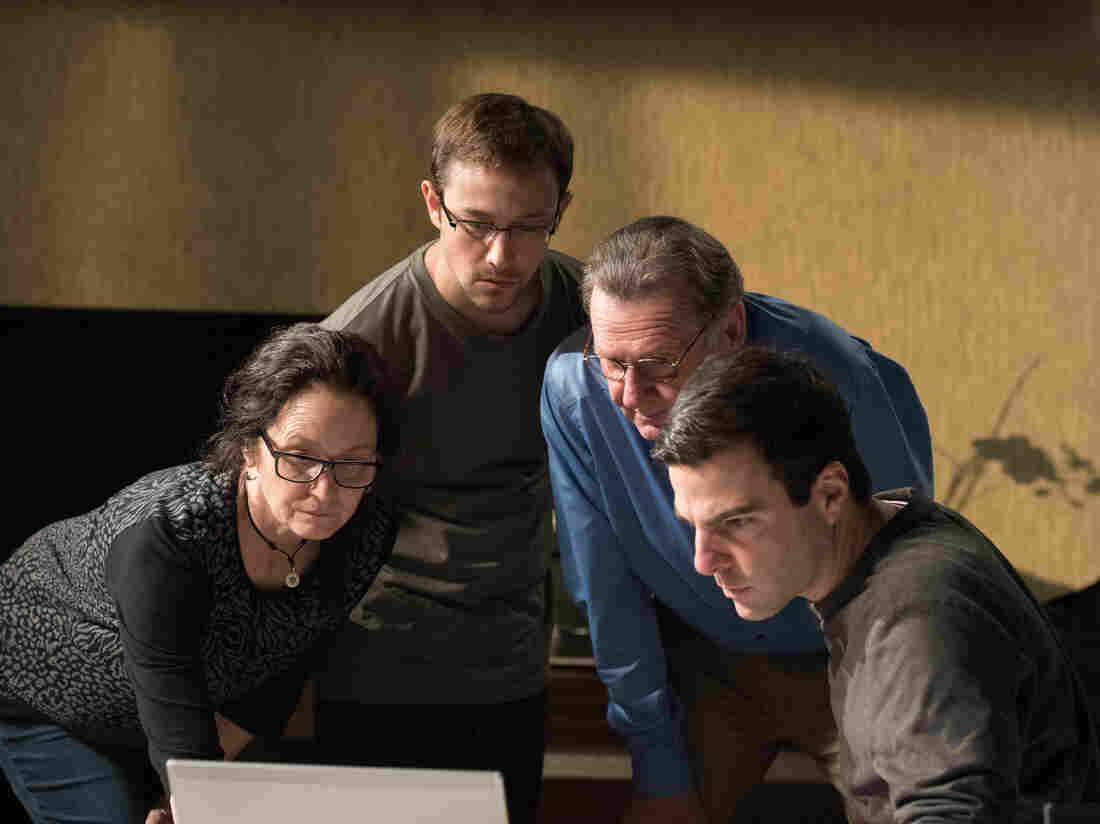 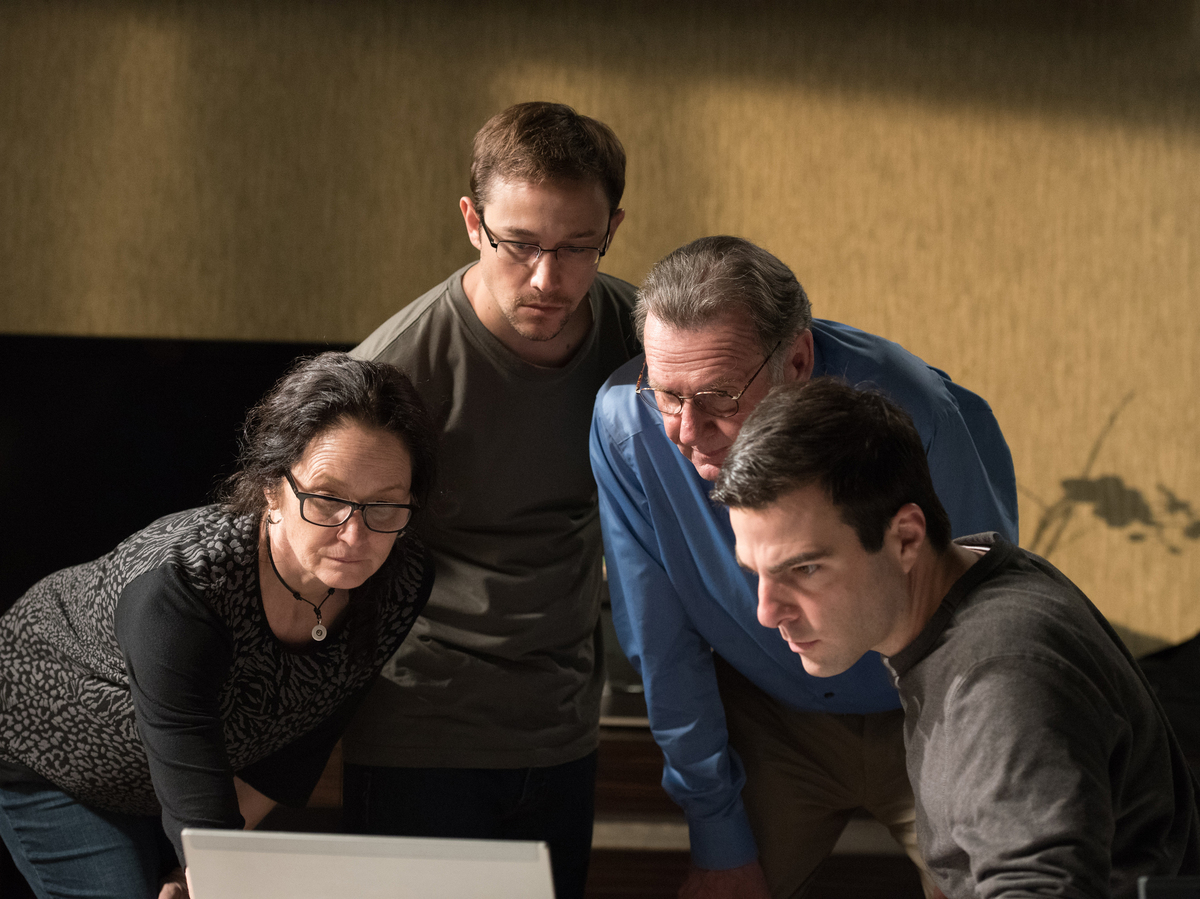 This image released by Open Road Films shows, from left, Melissa Leo as Laura Poitras, Joseph Gordon-Levitt as Edward Snowden, Tom Wilkinson as Ewen MacAskill and Zachary Quinto as Glenn Greenwald, in a scene from "Snowden."

Two very different narratives on the former National Security Agency contractor unfolded this week. Both proved that the debate over whether Edward Snowden is a traitor or a patriot is in no danger of running out of steam.

First, on Thursday, the House Intelligence Committee wrapped up a two-year investigation of Snowden. An unclassified summary of the 36-page report pronounces him a "a serial exaggerator and fabricator" who "caused tremendous damage to national security."

The week's other narrative comes from Hollywood director Oliver Stone. The new movie Snowden opened nationwide this weekend and paints him as a hero.

Conspicuously absent from the debate is the NSA itself. The agency declined NPR's request for an interview reacting to the movie. But Chris Inglis, former deputy director, agreed to see it and share his thoughts.

Inglis says he and Snowden have never met, which is the first of many bones he has to pick with the film. In it, there's a scene where the NSA deputy director asks Snowden to go to Hawaii to lead an important project. The deputy director at the time, in real life, was Chris Inglis.

"It's preposterous on its face. For many reasons," says Inglis. "That a deputy director would reach down to a contractor — who's performing an important but relatively low-level function — and ask them to take on a Jason Bourne-like activity? It simply exceeds all propriety."

Chris Inglis allows that Snowden the movie will shape public perceptions about Snowden the man. It could shift public opinion on who's the hero and who's the villain, in the ongoing debate over the top-secret files Snowden leaked — and what damage they may have caused.

The movie never claims to be a documentary. One of the opening shots announces it's a "dramatization of actual events."

Inglis is skeptical. "Dramatization to me means you add the occasional exclamation point. You bring in a musician to perhaps add some background music. But you don't tell a story that is fiction."

Asked what other aspects of the movie strike him as "fiction," Inglis says it portrays NSA staffers as cavalier about people's right to privacy, which he says is not true. Inglis also points to a scene involving an aptitude test. Snowden and his fellow recruits at the CIA — yes, Snowden worked there, too — are assigned to build a covert communications network. Average time to complete the test? Five hours. Not Snowden. He's done in 38 minutes.

"Clearly [he's] a clever person. But NSA makes a habit of hiring smart people. Extremely smart people. Also principled people. So he was clearly the former; turns out he wasn't the latter."

By now, you will have gathered where Inglis lands in the "Is-Snowden-a-patriot-or-a-traitor?" debate.

He served 28 years at the NSA, and he's the first to admit he is not impartial. This week NPR has interviewed both Snowden supporters and critics, airing their views both on the new movie, and on a new campaign for Snowden to be granted a presidential pardon. Snowden declined our request for an interview, and again, so did the current leaders of the NSA. Inglis, who retired in 2014, says he can't speak for the NSA anymore. But he says he personally is open to viewing Snowden and his motives as complicated.

"I do see him as a more nuanced character," Inglis says. "Somewhere, there was an attempt or perhaps an intent on his part to do something noble."

Inglis acknowledges that the NSA did not always strike the perfect balance between collective security and individual rights. He says the NSA should have been more transparent about its domestic surveillance activities since the Sept. 11 attacks.

"But broadly, when I stood back," he says, "the story that was told [in the movie] was a gross mischaracterization of what NSA's purposes are. And a gross exaggeration of Edward Snowden's own particular role in that. To the point where you could come away from looking at that movie, saying why are 50,000 people at the NSA dead wrong? And one is absolutely correct?"

When the trailer for the movie came out back in April, Snowden tweeted, "For two minutes and thirty nine seconds, everybody at NSA just stopped working." The suggestion being, the spy agency was busy watching.

"I don't think that's true," says Inglis. "I think Edward Snowden wants to be important. Who doesn't? Who doesn't want to matter? But we've listened to Edward Snowden. We've heard what he had to say. We took that moment to examine — to be introspective about, what it is he might be talking about that we need to take heed of and do something about. And then, having considered all that, as we must — we've moved on. And so NSA is looking forward."

In real life, Snowden remains in exile in Moscow. His visa to stay in Russia runs out next summer, and it's not clear what he'll do next. He communicates via Twitter and video link. This week Snowden weighed in, via video, saying he hopes the film will reach a new audience on, quote, "the issues that matter the most." He also said, "I love my country."