Accessibility links
In 'Jerusalem,' Nothing You've Ever Lost Is Truly Gone The house Alan Moore was born in was torn down in 1969 — along with most of the rest of his neighborhood. But in his new novel, Jerusalem, the legendary comics creator brings it all back to life. 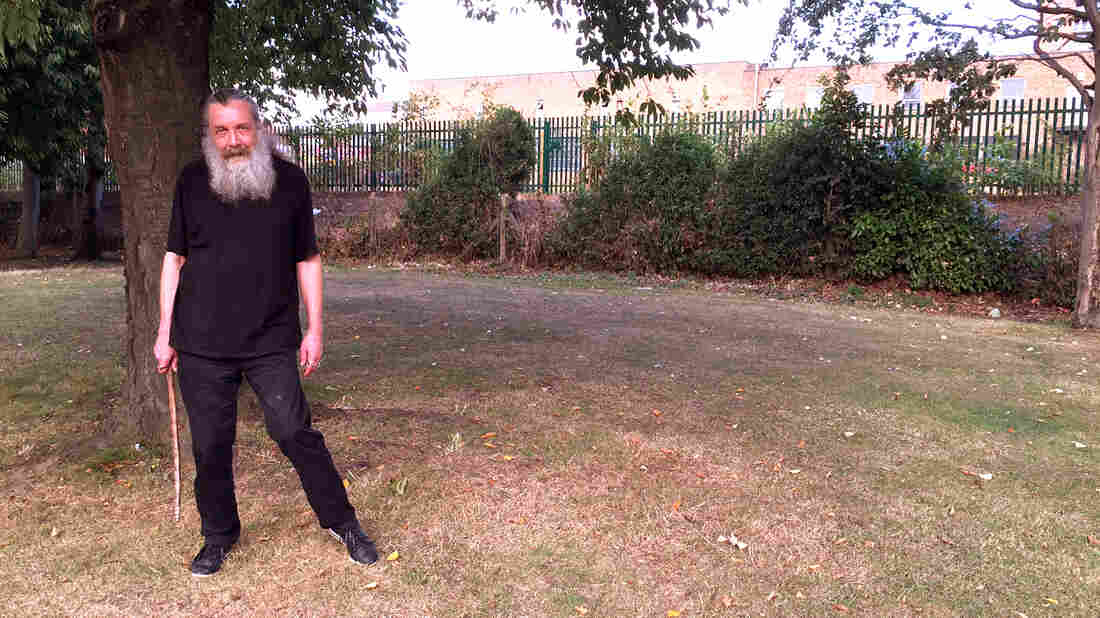 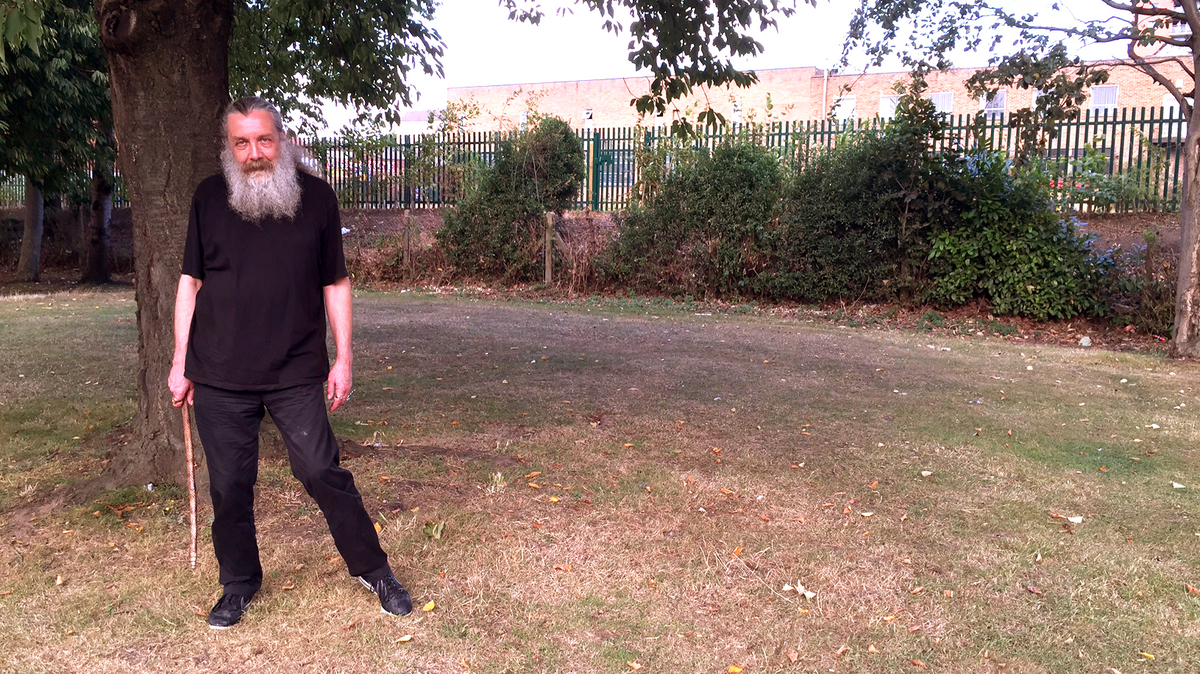 Holy ground: Alan Moore standing on the site of his childhood home.

For some comics fans, Alan Moore is basically a god.

He's the media-shy and magnificently bearded writer of comics like Watchmen, V for Vendetta and From Hell — though if you've only ever seen the movies, please, I implore you: Read the books. 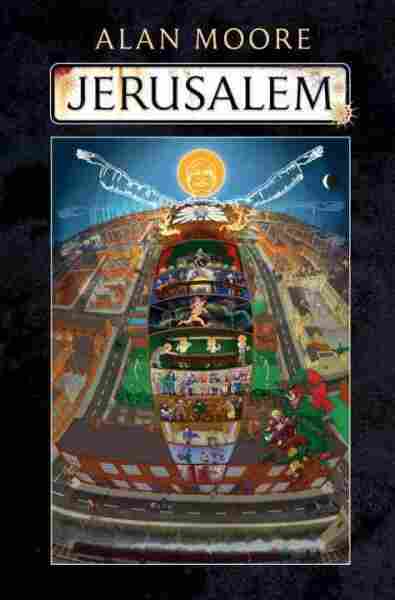 Recently, Moore said he's stepping back from comics to focus on other projects — like his epic new novel, Jerusalem. It's full of angels, devils, saints and sinners and visionaries, ghost children and wandering writers, all circling his home town of Northampton, England.

Moore still lives in Northampton, about an hour north of London. He rarely leaves, so I went there to meet him.

"This is holy ground for me," he told me as we stood on a neglected grassy strip by a busy road. It doesn't look like holy ground — nothing's here now except a few trees, and a solitary house on the corner. But it wasn't always this way.

"This is it," Moore says, pointing to the grown-over remains of a little path behind the corner house. "This is the alley that used to run behind our terrace. This is where I was born."

We're in the Boroughs — a half-mile-square patch of Northampton by the railroad tracks. Weedy vacant lots sit next to boarded-up public housing and the occasional pub. But wind the clock back a hundred years and this lonely place was packed with people and stories, like Newton Pratt and his fantastical beast.

"Around about this spot there would have been the pub, called the Friendly Arms. Newton Pratt, he had a zebra, that I think he purchased at Wicksteed Park. He would tie up the zebra, bring it out a pint of beer."

It's all built from the history of the neighborhood itself, and the history of my family. And most of the history is genuine, although the stuff about the angels and demons, I'm not so sure about that, you know? I think there's a good case to be made.

And there'd be a drunk zebra standing in Scarletwell Street, around the corner from the house where Moore was born in 1953. That zebra shows up in the book, by the way — and here I thought he'd made it up.

"I had to make very little of this book up," Moore says wryly.

Jerusalem is hard to describe, apart from the physical and obvious: It's more than 1200 pages long and in hardback, you could use it to do bicep curls. It's part fantasy, part history, partly purely bonkers — but every page shines with a love of this place as it once was.

"It's all built from the history of the neighborhood itself, and the history of my family," Moore says. "And most of the history is genuine, although the stuff about the angels and demons, I'm not so sure about that, you know? I think there's a good case to be made."

In fact, you could say that Northampton — more than any of the hundreds of people that wander through the book — is really the main character. It only seems like a nondescript town in the British Midlands; to Alan Moore it's at the center of everything, from the English Civil War to the birth of modern capitalism.

"I had a sense, before I started writing Jerusalem, that this was a more important place than people gave it credit for."

In a little studio off of Northampton's Abingdon Square, we're sitting in creaky wooden chairs under a rather occult-looking stained glass window. Moore is all in basic black, heavy silver rings on every finger; a wizard on his day off. He fires up a hand-rolled cigarette almost as big as the book, and tells me about how Albert Einstein saw the universe: As a frozen explosion, a giant ball of beginning and ending all happening at once, forever. "Every moment that has ever existed or will ever exist, is somewhere suspended in that gigantic space-time football, and it is there forever, and it is not changing."

Wibbly-wobbly, timey-wimey, I know. But stay with me. It's important. Because if everything that ever was is still all around us, then nothing you've ever lost is truly gone.

The Boroughs was torn down in phases, beginning just after World War I. Alan Moore's family was forced out in 1969. But in Moore's book — just like in Einstein's universe — everything is still there, even the drunken zebra in Scarletwell Street.

This is the neverending story. This is your narrative. This is the wonderful, sacred story of your life. And it's going to be there forever.

"I find that reassuring," Moore says — and it is reassuring. Which is sort of weird if you're familiar with the rest of Moore's work. He's better known for supernatural horror, murder and mayhem and dystopia.

And while Jerusalem does have its fair share of horror and misery and death, Moore says he wants the book to help people re-think death, to be less afraid of it. "Whether it be their own death, or the death of other people, or the death of a culture — or even the fact that they don't do those sweets that I used to like anymore. But yes, that's all fine. Back down the road, they still make Spangles. Morecambe and Wise are still on television on a Saturday night. Everything's fine. Just as it was."

So don't worry about death. Live your life and enjoy the remarkable cosmos we live in.

"This is the never ending story," Moore says. "This is your narrative. This is the wonderful, sacred story of your life. And it's going to be there forever."

Jerusalem is in part the sacred story of Alan Moore's own life — and at the end of the book, one character says "That's what art's for. It rescues everything from time."