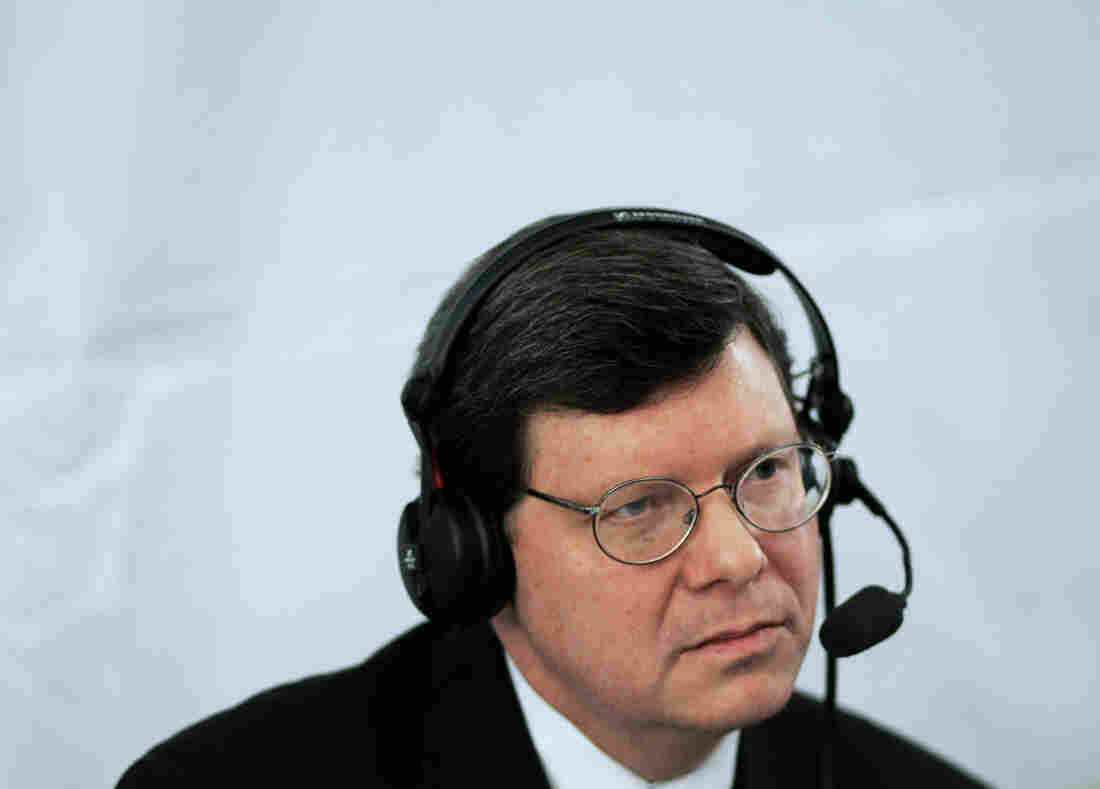 Charlie Sykes of WTMJ in Milwaukee, Wisc., shown here broadcasting in 2006, wonders how the conservative movement he belonged to could have chosen Donald Trump as its leader. Mandel Ngan/AFP/Getty Images hide caption 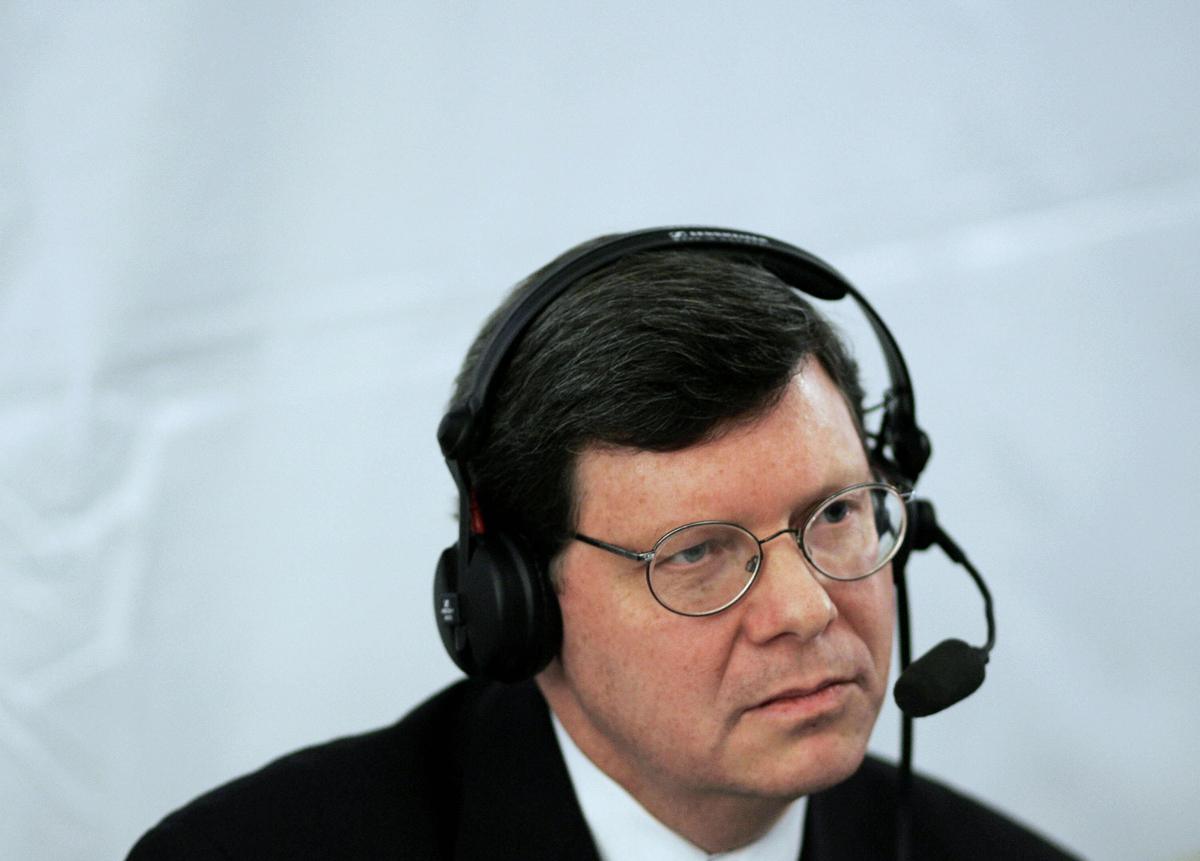 Charlie Sykes of WTMJ in Milwaukee, Wisc., shown here broadcasting in 2006, wonders how the conservative movement he belonged to could have chosen Donald Trump as its leader.

From his studio in the battleground state of Wisconsin, talk-radio host Charlie Sykes — like other influential conservative talk-radio hosts across the country — has held the mantle of modern conservatism for more than two decades.

Every day, he goes on the air for three straight hours, vetting rising stars and inviting Republican leaders and listeners to hash out the issues of the day.

"I think it's fair to say that there's been no conservative leader in Wisconsin who hasn't been a regular guest on my show," Sykes said. "If you wanted to be introduced, you needed to go through conservative talk radio."

Sykes, 62, views himself as one of the gatekeepers for the conservative movement — but, in recent months, he has found himself increasingly on the margins. That's because he has refused to get behind Republican presidential nominee Donald Trump.

Sykes has emerged as one of the leading voices against Donald Trump's bid for president. He is bothered by the nominee's record of donations to various Democrats over the years, as well as his past positions on issues like abortion or universal healthcare, which he says don't square with traditional conservative values.

Trump Calls Into Radio Show; Host Is A Member Of #NeverTrump Movement

Trump Calls Into Radio Show; Host Is A Member Of #NeverTrump Movement

Most of all, he's afraid that the Republican nominee's rhetoric will hinder the party's efforts to reach new demographics.

"It's going to be very, very difficult after this is over to come back and to say to women, to minorities, to young people, 'That wasn't us. No, that whole thing that just happened? That's not us. We are something else. We, in fact, are open and we are inclusive.' "

Sykes finds himself wondering how the conservative movement he belonged to could have chosen Trump as its leader. In part, he blames himself for not recognizing signs from his own audience, which he says has grown "more intolerant of views outside of their particular world view" over the last decade.

Listen to a clip from Sykes' show

It's a reality that has, on occasion, played out live on air:

Sykes said he's noticed listeners becoming increasingly dogmatic in their rejection of mainstream sources of information and simple facts. They've increasingly cited sources like InfoWars, a show launched by radio host and conspiracy theorist Alex Jones. Listeners have quickly dismissed any attempt to correct misinformation, especially if his source for those challenges are sources like The New York Times or The Washington Post.

"Rather than ... saying 'Well, thank you for correcting that,' many people actually pushed back, and said, 'Well, no, the source you're citing comes from the mainstream media," Sykes said. "We've been conditioned over the years not to take anything the mainstream is saying seriously, at all.'"

This leaves Sykes wondering whether he and others in conservative media helped created an environment in which a Trump nomination was possible.

"Maybe we have been undone by our success a little bit," Sykes says. "At some point, we went from being the counterweight to creating our own alternative reality."

Looking back, Sykes regrets the way he spoke about certain issues on his program, including immigration and Islam. He says that, after this election, he wants to do a thorough self-examination.

"I want to spend some time going back to see: were there things I said, thinking they meant one thing, that were heard in a different way?" Sykes said. "I may have made points that I don't think were racialized, but which may have been internalized by people in a very, very different way."

One example, he says, is to a music video he ran on his show back in 2011. It depicted a young African-American woman using her food stamp card, or EBT card, at various fast food and liquor stores in Los Angeles.

"While I thought of that as a light parody, I don't think that it was necessarily received that way," Sykes said. "Knowing what I know now about the divisions in society, I don't think I would do that again. I think it certainly could have been perceived as a racial stereotype of a welfare mother."

The rise of conservative media

In 1992, when Sykes began his show, Rush Limbaugh was paving the way for a surge of conservative radio programs with a collective mission to provide an alternative to the mainstream media. Limbaugh, Sean Hannity and Laura Ingraham reached a national audience while Sykes did his piece as the most influential conservative on radio in Wisconsin.

"We have a lot of people who, I think, turn to us as trusted voices," he said.

But, Sykes said, too many of these media personalities seem to have decided that their ratings are more important than their conservative values.

"I think among the things that have been the most the disheartening is to watch other people who do what I do decide that they are merely entertainers," he said, "or willing to surrender some of the principles, willing to go from being gatekeepers to being cheerleaders to being outright flacks."

Listen to a Rush Limbaugh Show caller on Trump

Some listeners would agree with Sykes, like this recent caller to The Rush Limbaugh Show:

Sykes looks at these moments as a sign of what's to come.

Regardless of the outcome of this election, Sykes says it will be important for conservative media to do as he plans to next year: reflect on whether there's still a line that divides information from entertainment.