Accessibility links
A Comics Convention For The Unconventional: The Small Press Expo Every year the Small Press Expo (SPX) brings creators of independent comics together with passionate fans. Many of those fans make comics themselves and say they're inspired by SPX's "funkier" feel. 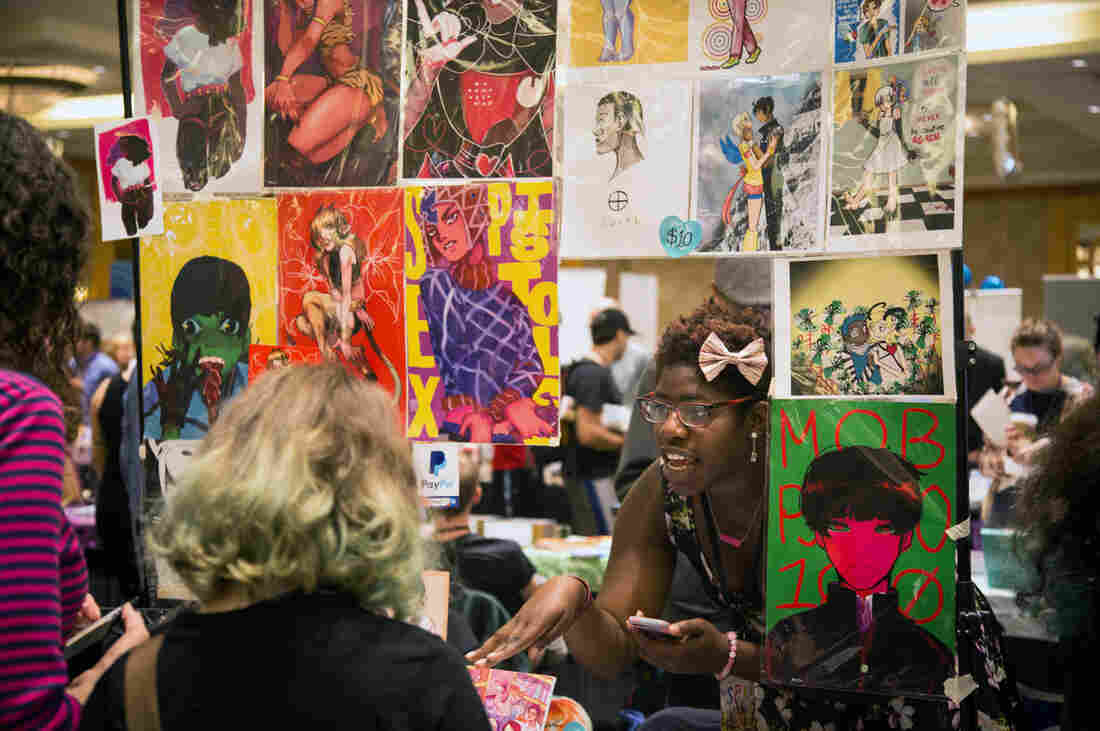 The Small Press Expo holds a yearly lottery for some of the tables, which allows for new artists to exhibit. Courtesy of SPX hide caption 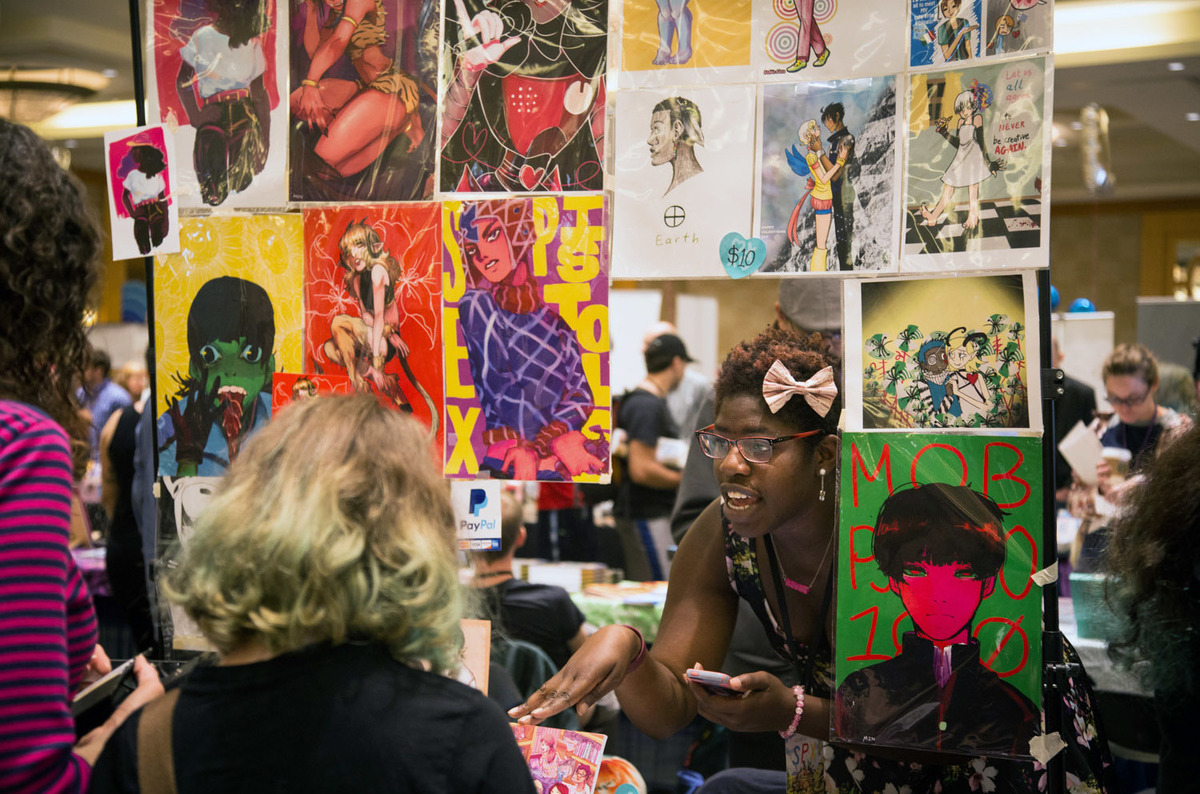 The Small Press Expo holds a yearly lottery for some of the tables, which allows for new artists to exhibit.

I've attended the Small Press Expo, or SPX, for 10 years now. This year, I convinced NPR to let me take a reporting kit and interview attendees about what drew them to the show.

(You can check out more photos, illustrations and interviews with creators from the 2016 Small Press Expo on the NPR Illustrations Tumblr over the coming days and weeks.)

In theory, SPX seems a lot like many of the other comic-cons that have been popping up across the country over the last few years. There's the vast exhibit floor, there's a packed schedule of panels and spotlights featuring interviews of, and discussions between, various comics creators. People mill about, lugging bags loaded down with stuff they've bought, or find an empty patch of carpeted hallway on which to plop themselves and rest while perusing their purchases.

If you close your eyes, its sounds a lot like any other con: the low, steady murmur of voices punctuated by the occasional exclamation of delight or surprise from someone who's stumbling across an old friend — or a new passion.

But the moment you open your eyes, you're reminded that SPX isn't like most other cons.

It's smaller, for one thing — the big shows in San Diego and New York attract upwards of 130,000 people, and SPX's attendance is closer to 3,000. It fills the huge ballroom at a hotel in North Bethesda, Maryland, but unlike other comic-cons, where companies build massive booths that tower over you with video screens, loudly hawking all manner of comics-adjacent stuff like toys, games, statues and t-shirts, everything at SPX is at eye-level.

Hip-level, technically, as it's just rows and rows of folding tables piled with comics and artwork.

"It's not just a way to sell comics or buy comics," said Whit Taylor, from New York City. "It's also a social event ... a chance to catch up with people, and meet new people both during the show and after the show and that's kind of the most meaningful part to me." 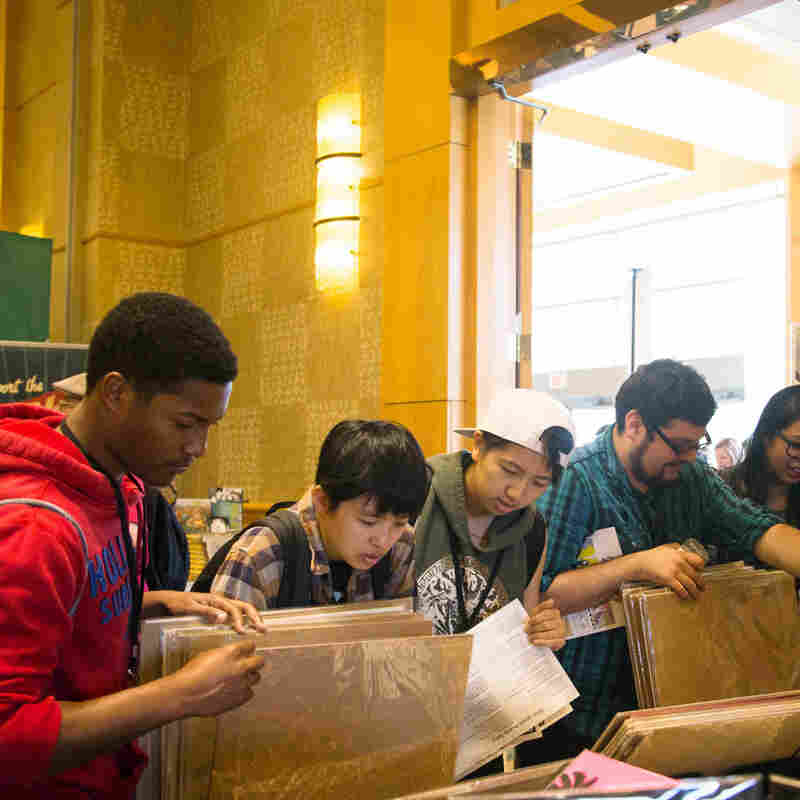 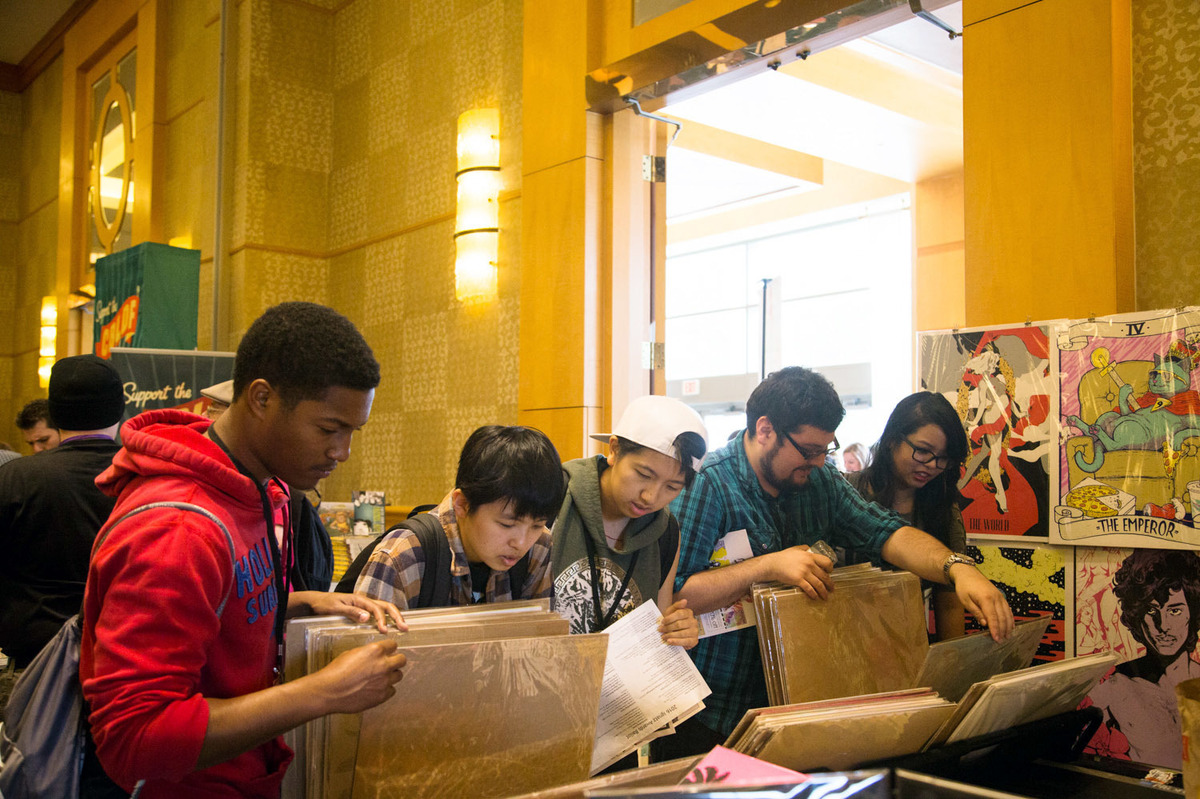 The Small Press Expo brings together fans and creators of independent comics.

Whit came not just to buy comics, but to connect with the people who make them. And SPX is built around making exactly that happen.

It's a convention for independent comics. People define "indie comics" differently, but for our purposes: not Marvel, and not DC.

"I like that it kinda sticks to just comics," Whit said. "That's how it started out. I know that shows can kinda go in different directions. I'm happy to see merch here and there, but I like that it's just about independent artists or small presses."

Some small presses do set up tables at the Small Press Expo, fittingly enough — publishers like Drawn and Quarterly and Fantagraphics are SPX staples — but mostly, it's men and women sitting or standing behind the tables, grinning earnestly at passersby to get them to stop and sample their work. That work could be a handsomely bound graphic novel, a print, or, in many cases, a mini-comic that they've drawn and copied and stapled together themselves.

Sarah Elizabeth drove up from Williamsburg, Virginia, and she appreciated that many of these comics are made without the usual gatekeepers — which affects who gets to make them.

"What I really like about this one so far is that there's a lot more queer comics," she said, "a lot more comics by women here, specifically women of color, that's what stuck out to me the most."

Liz Hathaway from Philadelphia came to support the creators.

"It's independent comics, you know I give a lot of credit to a lot of these artists because they really believe in what they're doing," she said. "They have a passion for it, they're spending a lot of their own money and resources to promote themselves so they must believe in themselves, and I like that independent, alternative type of comic."

But Liz is also here for a more practical reason.

A Con About The Craft of Comics-Making

It turned out that Liz, and Whit Taylor, and 18 out of the 25 people I approached at random last weekend, make comics themselves. (Three of those 25 turned out to be NPR interns — make of that what you will.) That's something else that sets this con apart, and has since it began in 1994. 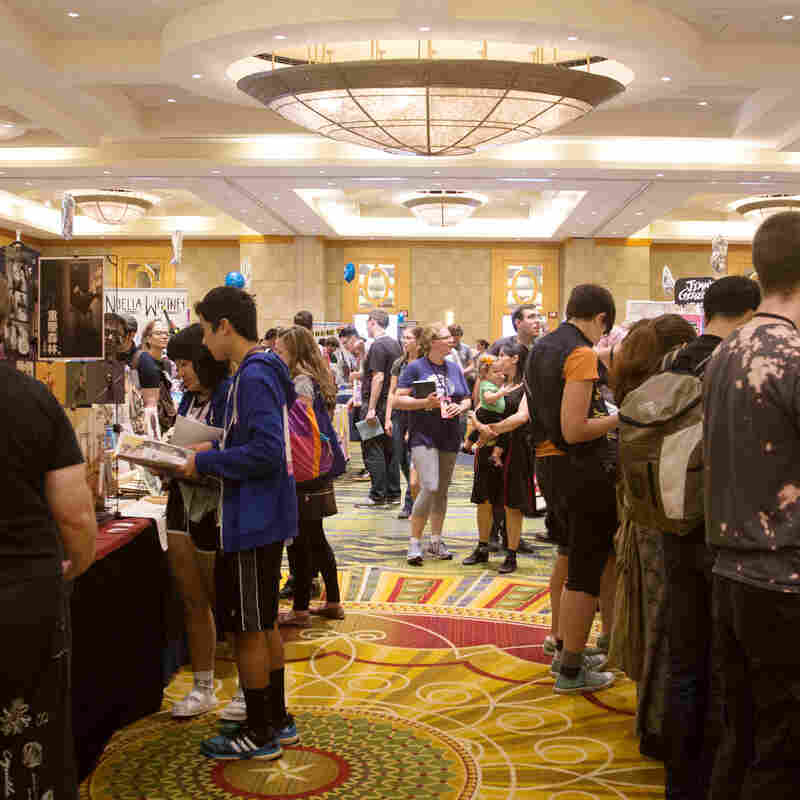 The main floor at SPX is where independent artists have tables next to larger well-known publishers like Drawn & Quarterly or Fantagraphics Books. Courtesy of SPX hide caption 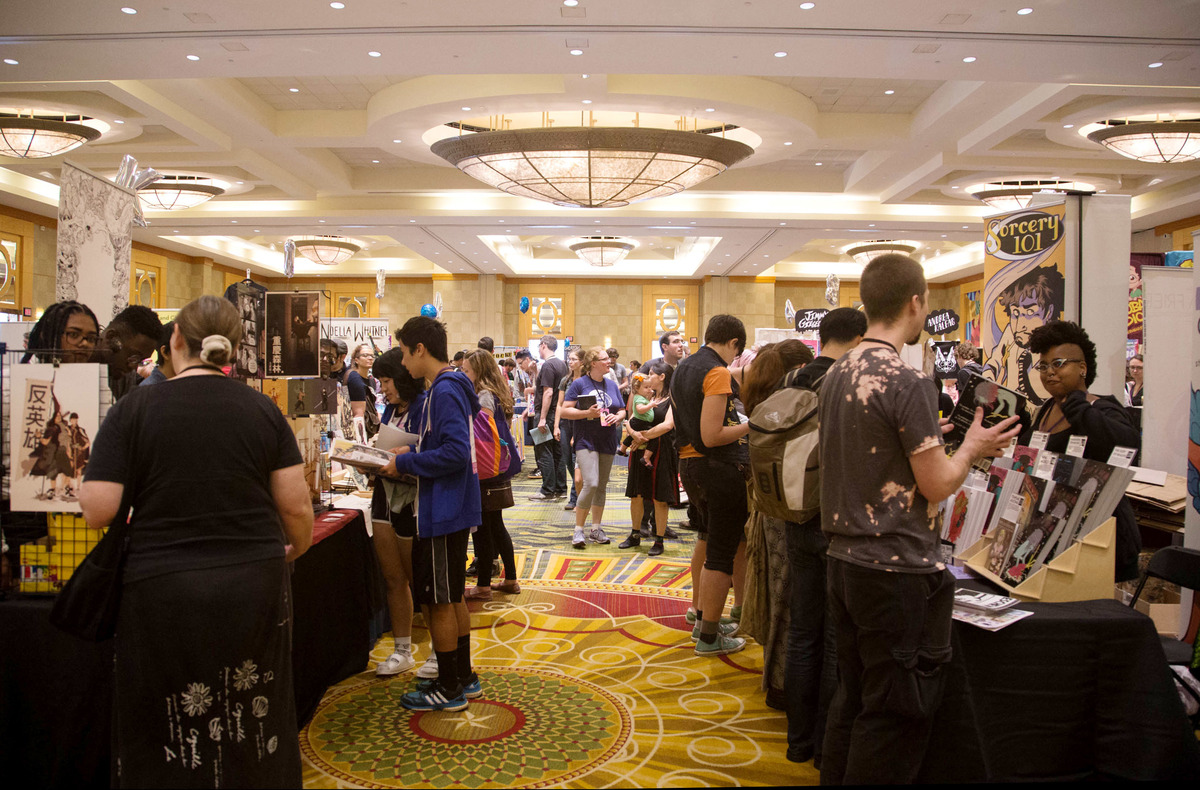 The main floor at SPX is where independent artists have tables next to larger well-known publishers like Drawn & Quarterly or Fantagraphics Books.

"Well it was started by a bunch of local DC people who basically revolted against the mainstream superhero conventions," said Warren Bernard, Executive Director of SPX. "They were like, why can't we independent comics people get together with self-published people ... and they had their first con over in Silver Spring back in 1994."

The reason it grew to its current size, he said, is that today, "Many more people are activated by comics that aren't superheroes — now that's not taking anything away from superhero comics, I happen to like reading them — but there's this other universe that's everything but. And that's what SPX is all about: everything but superheroes."

He believes the people who come to SPX each year are not looking to score big Hollywood development deals. They're driven by a different ethos.

"I think that's part of what keeps SPX a little bit separate is that, you know, people are here for the art and the craft," he said. "Whether you're an attendee coming in and wanting to do stuff yourself, or you're a creator that's hanging out with all the other creators or just an attendee that kind of enjoys it, that is the thing that ties everyone together is the art and the craft, kinda combined."

Which is not to say that big development deals don't happen. Cartoon Network, Disney and Nickelodeon send people to SPX every year to scout for talent. Rebecca Sugar, who created the TV show Steven Universe, put in her time behind a table at SPX. So did Lisa Hanawalt, whose distinctive character designs can now be seen on the Netflix series Bojack Horseman. Raina Telgemeier sold her mini-comics here, back in the day, as did many other creators who've gone on to huge commercial success.

"Honestly [we come to SPX] because it's part of the world that we live in, and that we came up in, and it's cool to see all these people doing what they want to do instead of what they have to do for money," said Jaime Hernandez, half of Los Bros Hernandez, the team behind the venerable, and venerated, alt-series Love and Rockets.

SPX isn't completely unlike other cons — you'll likely leave having dropped a healthy chunk of change on books and art. But people like Bailey Kung, who started coming to SPX as a volunteer and is now a member of the executive board, leave with something else as well.

"It's definitely inspiring to be here," she told me, "everyone is making such awesome work, it does make me want to go home and draw something."