Accessibility links
Astronomers Find Clues In The Case Of The Glowing Space 'Blobs' Blobs in space emitting eerie, unexplained light have been puzzling astronomers for more than 15 years. Now, they think they are on to the cause of the mysterious glow. 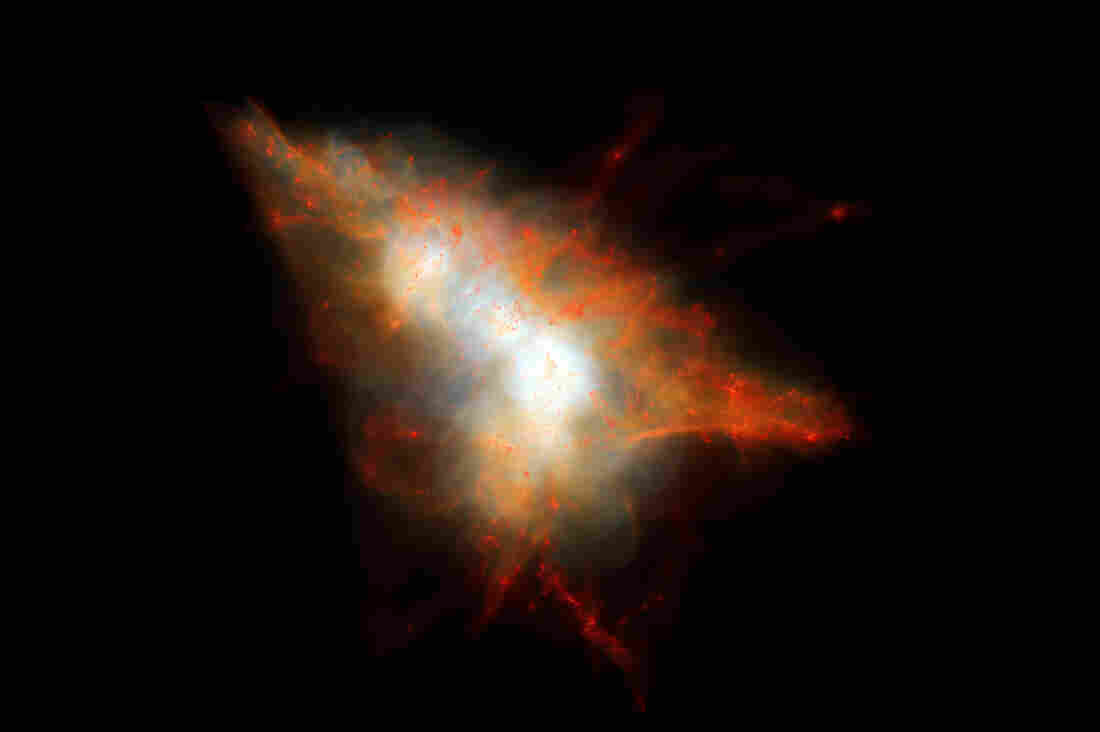 This rendering shows a snapshot from a cosmological simulation of a Lyman-alpha blob. J.Geach/D.Narayanan/R.Crain/European Southern Observatory hide caption 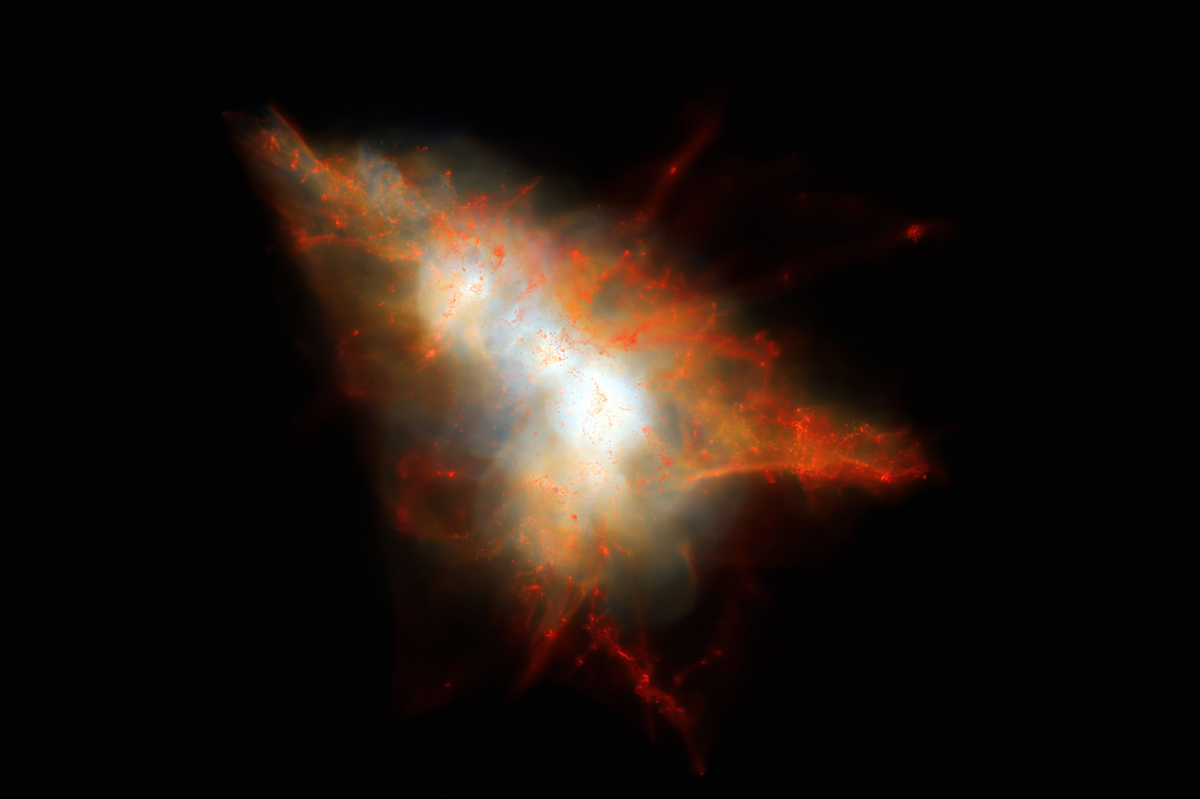 This rendering shows a snapshot from a cosmological simulation of a Lyman-alpha blob.

A mysterious glowing "blob" in outer space has puzzled astronomers for more than 15 years. Now, a team of researchers says it has uncovered the secret behind the blob's eerie light.

The blob was first spotted back in the late 1990s by Chuck Steidel, an astronomer at Caltech, and some colleagues. They were observing a bunch of galaxies in the distant reaches of the universe, he recalls, "but we also saw these big blotchy things."

At first, they thought they had somehow accidentally screwed up the images. But then they realized they had actually discovered strange, glowing clouds of hydrogen gas.

They were huge — about 10 times the Milky Way in diameter — making them some of the largest known objects in the universe.

Steidel's team named these mysterious objects Lyman-alpha blobs. The "Lyman-alpha" part of the name just refers to the wavelength of light they emit. And the "blob" part was supposed to be tongue-in-cheek, says Steidel, "like the blob from outer space or something like that." 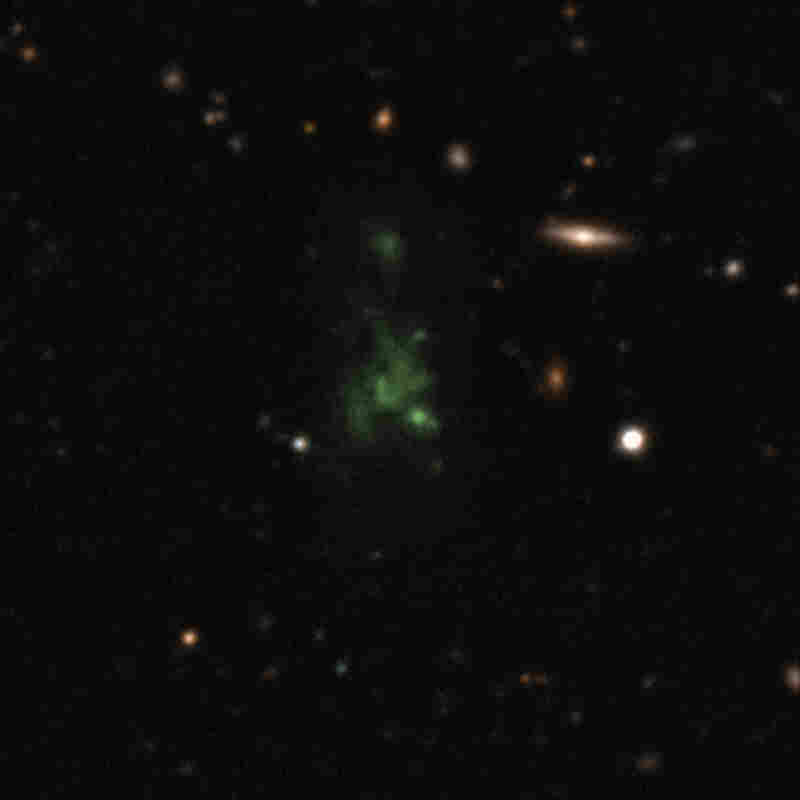 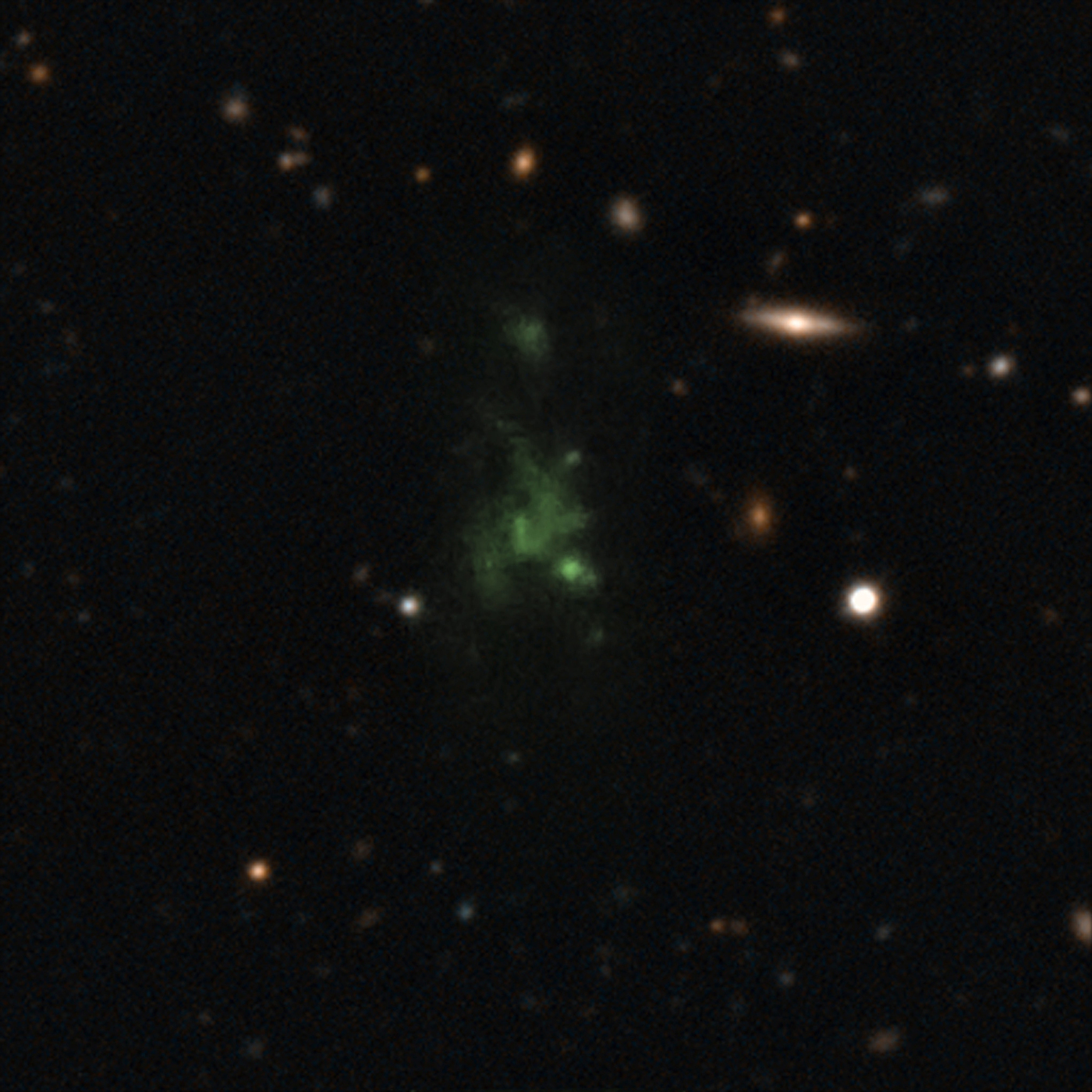 This composite image shows one of the largest known single objects in the universe, the Lyman-alpha blob LAB-1.

He and other astronomers just couldn't understand what made the blobs glow.

"There was no obvious source that could be illuminating that blob," says Steidel.

But then a team of astronomers peered into one of the largest, most famous blobs using a powerful telescope in Chile called ALMA.

The group found a pair of large galaxies hiding inside the blob. They couldn't be seen before because they were obscured by dust.

These galaxies are producing new stars at a frantic pace — and each is making the equivalent of 100 new suns every year, says Jim Geach, an astronomer at the University of Hertfordshire in the United Kingdom.

All this activity is lighting up the surrounding gas — producing the blob, according to a report in The Astrophysical Journal.

The effect is similar to what you see when you look at a streetlight on a foggy night, Geach explains: "You see a sort of halo around the streetlight because the light from the central streetlight is scattering off water droplets in the fog. It's kind of analogous to what we're seeing with these Lyman-alpha blobs."

Others agree that scientists now seem to have a pretty good idea of what powers this one particular blob.

"It's too early to say that this is going to end up being typical, but it's pretty interesting," Steidel says. "It's nice to see that one's gut feeling turns out to be supported by something other than speculation."

Matthew Hayes, an astrophysicist at Stockholm University, says he guesses that if you looked hard enough, with the right kind of telescope, you'd find something like this in, probably, all of the blobs.

"These things are still rare. And they're still kind of strange. But we're putting it together now, I think," says Hayes.

He adds that while the mystery of the outer space blobs isn't completely solved, he thinks scientists are getting there.