Listen · 7:19 7:19
Religious Voters May Lean Republican, But Feel Conflicted About The Candidates 7:19 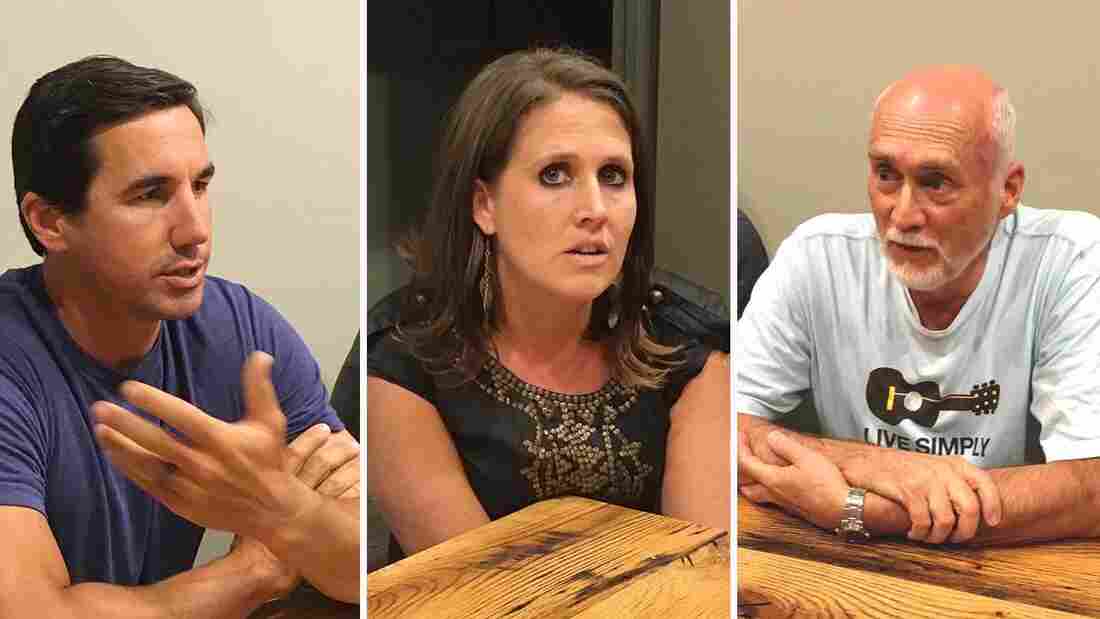 North Carolina voters (from left: David Cuthbert, Kristine Martin and Jack Lawrence) and members of the The Heart congregation, a church in Boone, N.C., all described their Christian beliefs as central to their lives. Tom Gjelten/NPR hide caption 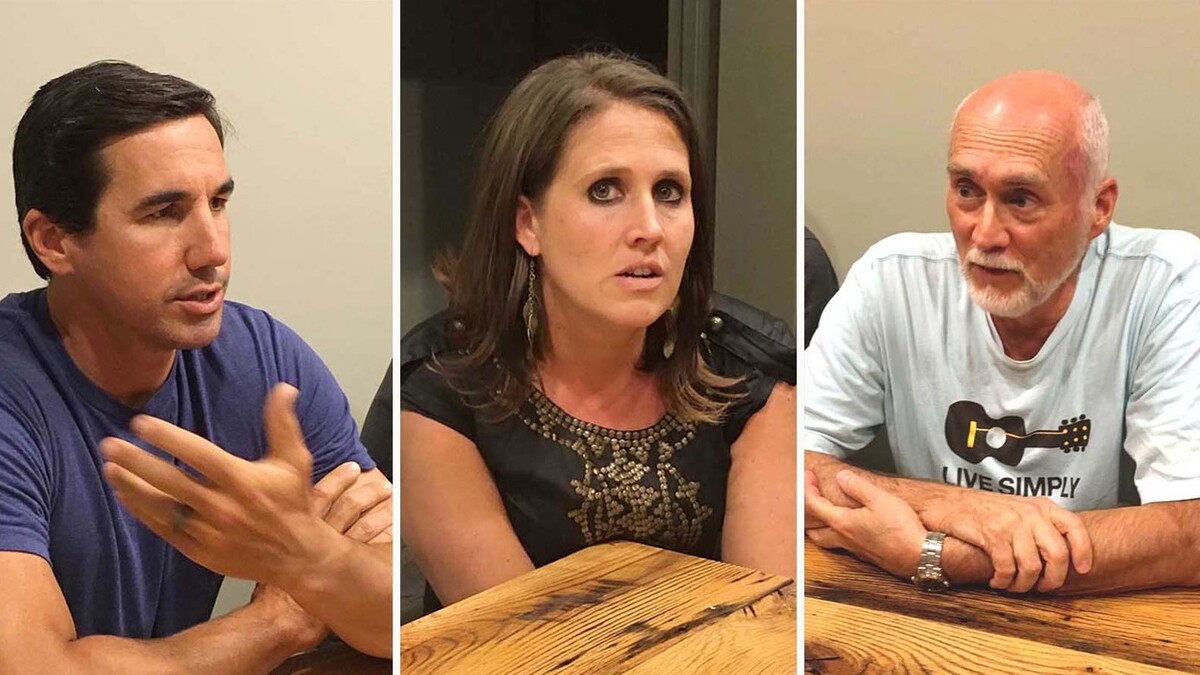 North Carolina voters (from left: David Cuthbert, Kristine Martin and Jack Lawrence) and members of the The Heart congregation, a church in Boone, N.C., all described their Christian beliefs as central to their lives.

Researchers seeking to predict how Americans will vote have for years identified an important clue: The more religious you are, the more likely you are to lean Republican.

Conversations with more than two-dozen self-identified "faith" voters in Boone, N.C., suggest that pattern is holding this year, even while revealing the same high level of voter disenchantment evident across the country.

"I've always felt that the Republicans align with my beliefs," said Judith Martinez, 51, a naturalized U.S. citizen born in Mexico. An evangelical Christian who leads the Spanish-language ministry at Mount Vernon Baptist Church in Boone, Martinez's opposition to abortion and same-sex marriage are decisive factors in determining which party and candidate to support. "The Bible is very clear in telling us the way we should live," she said, "and we are not respecting that." She expects to vote for Donald Trump.

Among Hispanic voters, Martinez is in a minority. A recent ABC/Washington Post poll showed Republican candidate Donald Trump trailing Hillary Clinton by 25 to 40 points among Hispanic voters in various battleground states. That advantage, however, may diminish when religious beliefs are considered. Voting analyses carried out by the Pew Research Center on the basis of exit poll data in the 2000, 2004 and 2008 elections identified a strong correlation between religiosity and Republicanism.

"How often you attend church services is at least a good predictor [of how you vote] as your level of education, your gender, your age, your union membership, or the region where you live," said Alan Cooperman, Pew's director of religion research. "The only thing stronger is race." (The recent ABC/Washington Post poll showed Trump drawing only about 5 percent of the African-American vote, regardless of religious affiliation.)

How often you attend church services is at least a good predictor [of how you vote] as your level of education, your gender, your age, your union membership, or the region where you live.

The pro-Trump "faith" voters interviewed in Boone, a small city in the western Carolina mountains, have decidedly mixed feelings about his candidacy, however. Judith Martinez says her religious beliefs ultimately may dictate a vote for Trump, but she is deeply troubled by his harsh characterization of Mexican immigrants.

"He's very crude," Martinez says. "Mexicans are some of the people here who work the hardest. He doesn't value their efforts."

Nationwide, nearly half of Trump's supporters are "very enthusiastic" about his candidacy, according to the ABC/Washington Post poll, with about a third of Clinton supporters saying the same of her. Of the religious voters interviewed in Boone, however, not one was a hard-core supporter of either Trump or Clinton.

"I will not vote for anybody," said Jack Lawrence, 67, a retired optometrist and founding member of an interdenominational church in Boone called The Heart. "I will cast a vote, but it will not be for anybody. It will be a negative vote." In his case, he says, it will be a vote against Clinton.

Lawrence was one of six members of The Heart congregation who agreed to meet with NPR to discuss how their Christian commitments are influencing their thinking about this year's presidential election. Three were undecided, including Kristine Martin, 36, who moved to Boone two years ago when her husband took a position at Samaritan's Purse, the evangelical Christian charity founded by Franklin Graham.

"It's a scary election for me," Martin says. "There's part of me that wants to check out." 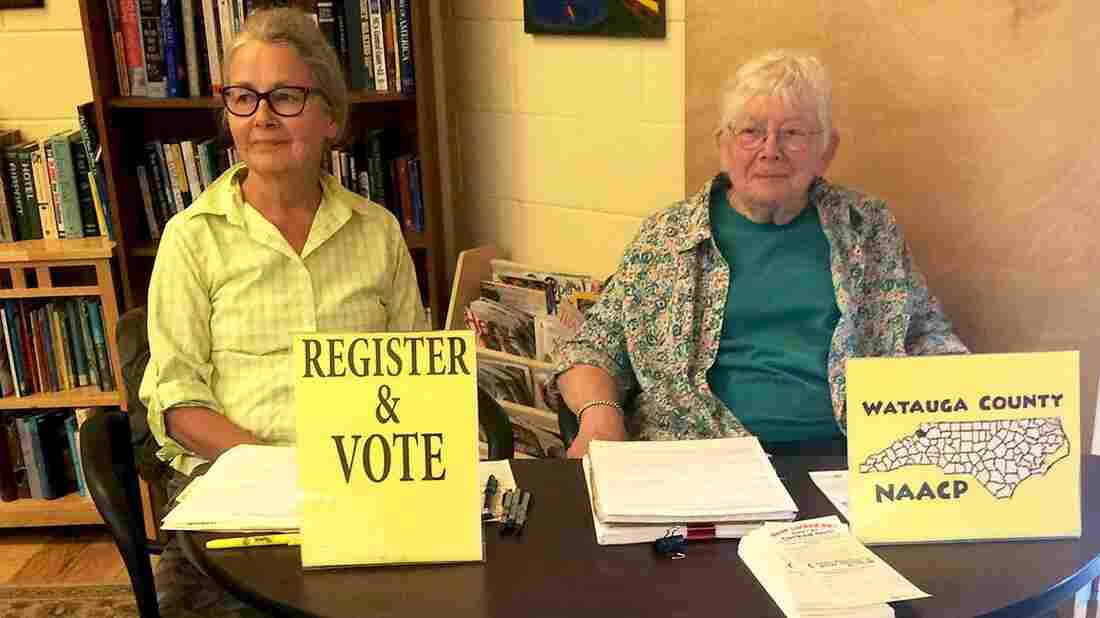 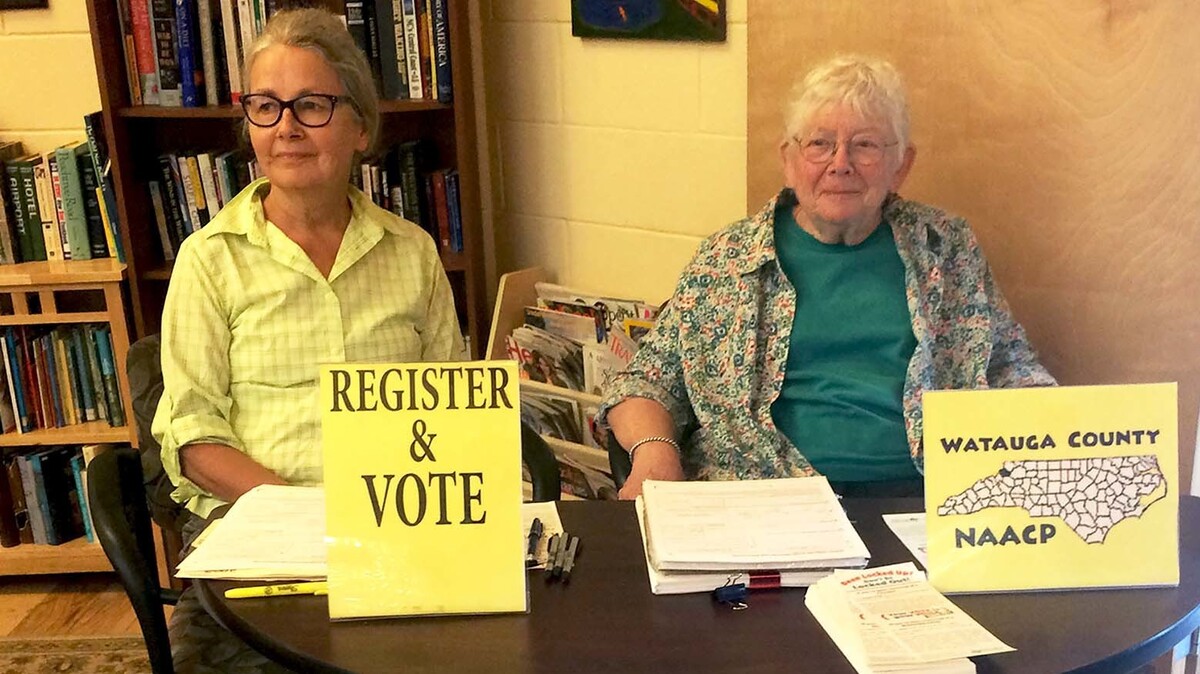 NAACP volunteers Marjorie McKinney (left) and Joan Brannon sit at a booth to register people to vote at the Hospitality House, a community shelter in Boone, N.C.

All six Heart members describe their Christian beliefs as central to their lives. "That's where we find our identity, first and foremost," said David Cuthbert, 41, chief executive officer of Wine to Water, an organization in Boone that promotes access to clean water around the world. "At the end of the day," he says, "it's what shapes every aspect of our lives."

That commitment, however, may be of little help in guiding the election decisions at The Heart this year. Cuthbert says he remains undecided.

One of the two Heart members leaning to Clinton, 35-year-old Dejah Miranda-Huxley, says her preference is a reaction to what she sees as Trump's "exclusivist" attitude toward minorities and immigrants. "Neither side reflects my faith," she said. 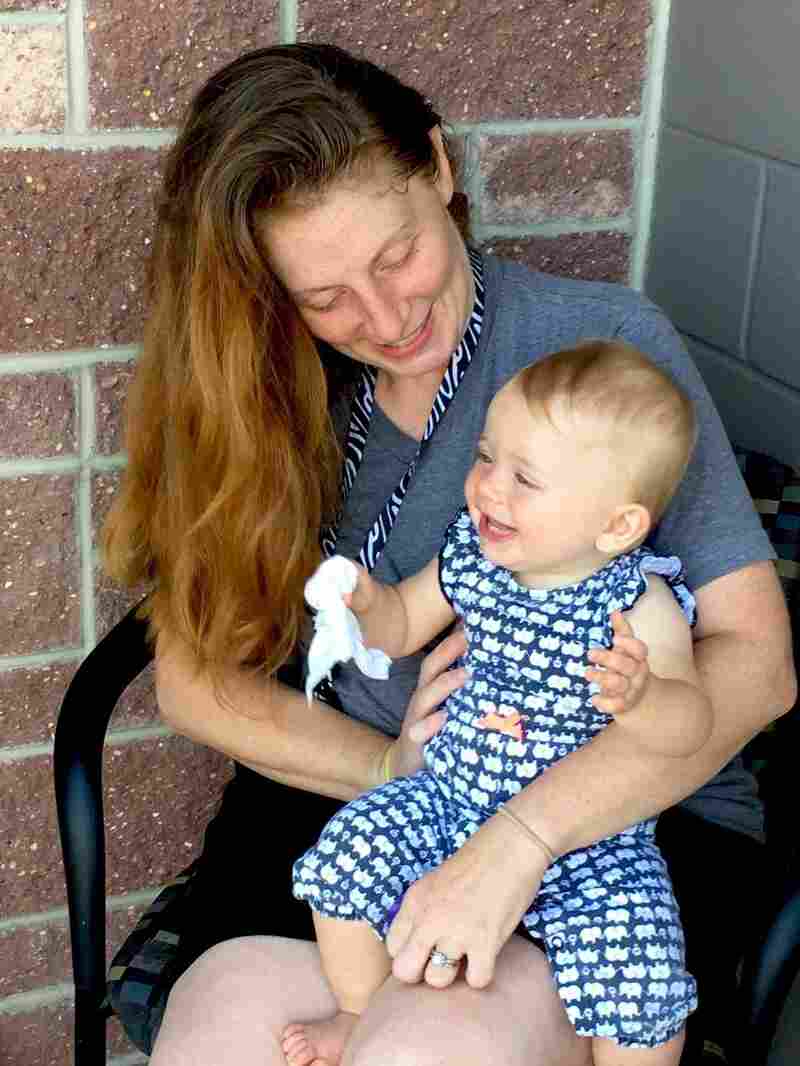 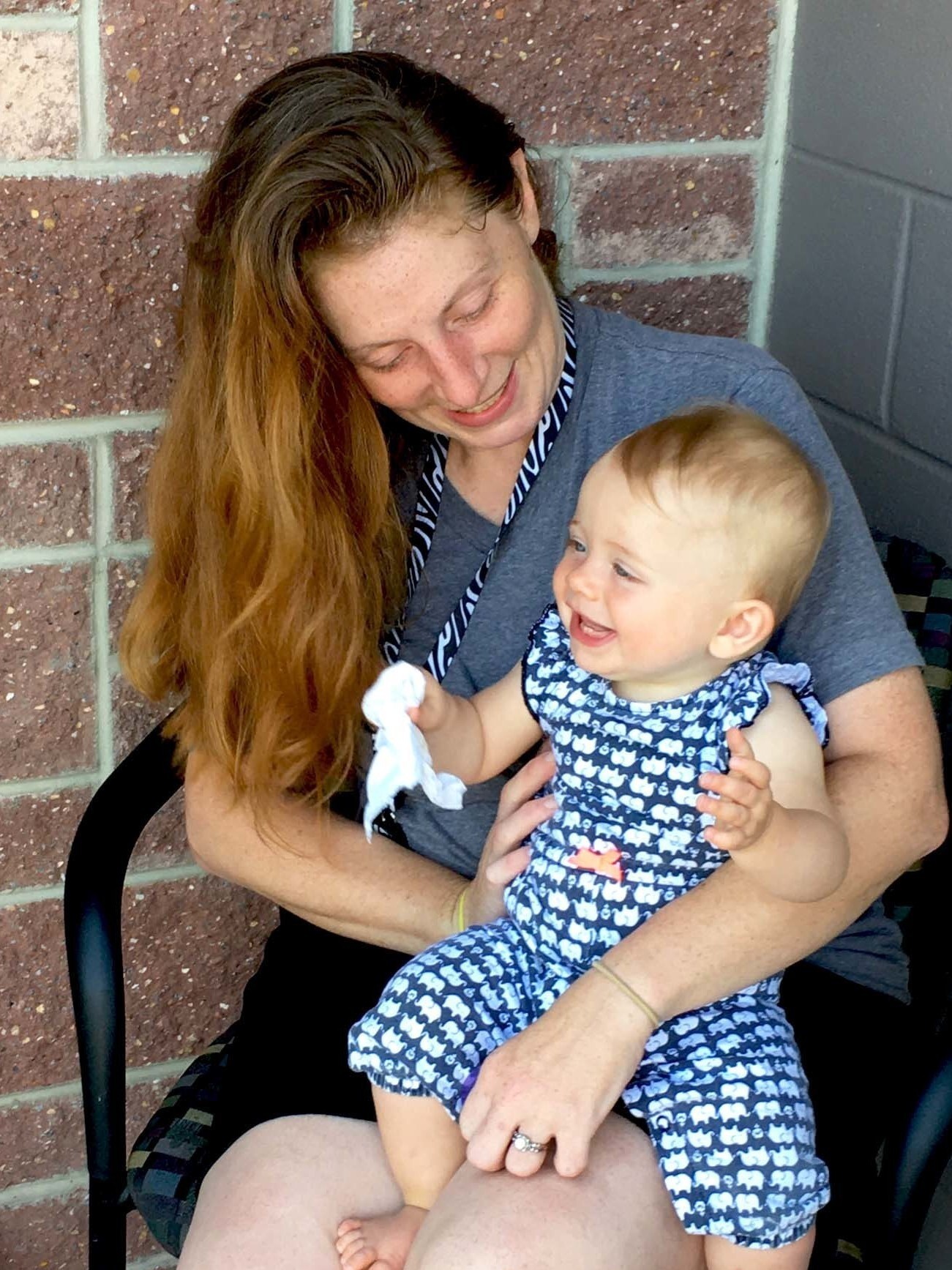 Renee Miller plays with her 11-month-old daughter, Ariana, at the Hospitality House in Boone, N.C.

Whether the Republican advantage among religious voters in places like Boone will hold in future elections is unclear. Renee Miller, 34, who was raised in a strict Pentecostal household near Boone, found her loyalty to the Republican Party challenged after going through a yearlong addiction treatment program at Hospitality House, a community shelter in Boone serving people in the midst of poverty-related crises.

"I came here homeless and pregnant and addicted to drugs," Miller says. "This place has been really helpful as far as getting treatment. I now have a healthy baby, a beautiful little girl, and I'm a completely different person." A registered Republican, she attributes her political identity largely to her religious upbringing. "I definitely want a leader who believes in God," she says. A year at Hospitality House, however, has left her unsure of her political loyalties going forward.

"At this point, I would probably vote for Trump," she says, "because I just have a lot of mistrust for Hillary." But she is not convinced her instincts are entirely correct. "Being in this position has made me rethink my political values," she said. "People ask me why I'm Republican, when it's the Democratic Party that mostly supports programs like this that help people. I'm conflicted." As are many religious voters in Boone, and voters around the country.