Accessibility links
Taylor Mac Tells The U.S.'s Musical History With An Extra Dose Of Glitter In an extravagant, 24-hour journey through American popular music, performance artist Taylor Mac tells the story of communities who have built themselves through falling apart. 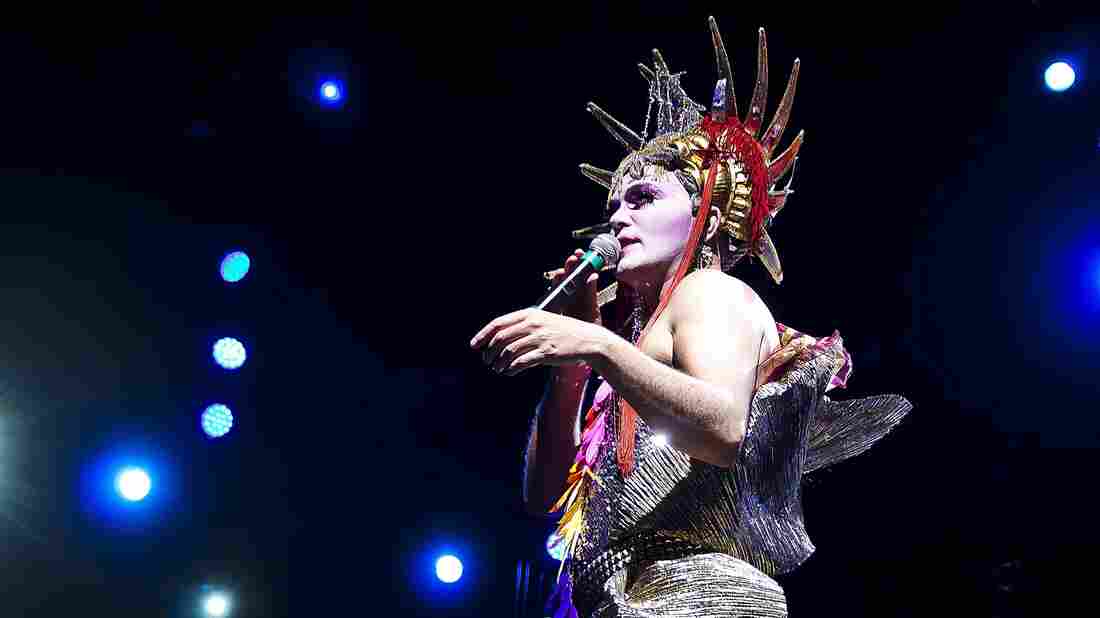 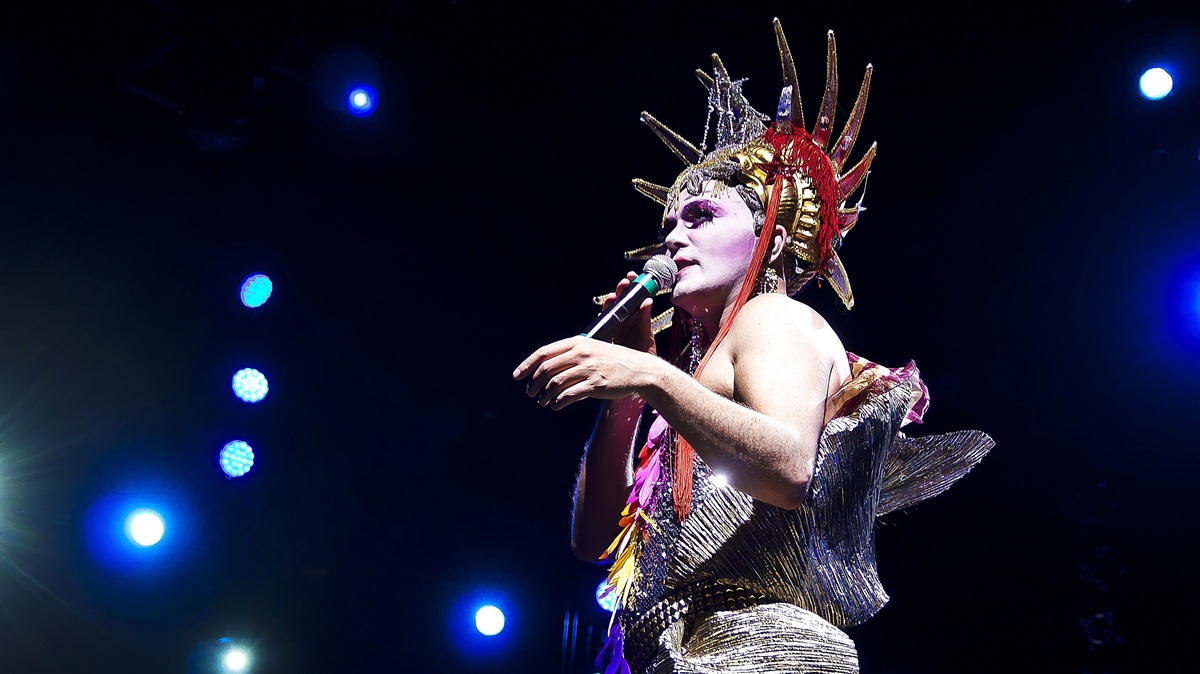 Ves Pitts/Courtesy of the artist

At noon on Oct. 8, 2016, the performance artist Taylor Mac will take the stage at St. Ann's Warehouse in Brooklyn, N.Y., with a full orchestra and backup singers — 24 musicians total. They'll begin singing American songs from the year 1776. Each hour, one person will leave the stage — and each hour, history will advance one decade, without a break. By midday on Oct. 9, Mac will be the only one left on stage, singing songs from the present day.

It's a show that Mac has spent years developing, called A 24-Decade History of Popular Music.

"I wanted it to be so long that the audience is falling apart. I'm falling apart. We're all falling apart," Mac says. "But because we go through the history all together, and because I make the audience do so many things, they start to get to know each other, and we actually are building some kind of a tangible community out of an ephemeral art form."

The idea is that, as they collectively fall apart, the audience and the performers come together.

Sometimes you have to show the ridiculousness of something to expose it.

Mac (who uses the gender-neutral personal pronoun "judy" but also accepts masculine pronouns) has been dreaming about creating a show like this for nearly 30 years.

"In 1987, I went to the very first AIDS walk in San Francisco, and it was the first time I'd ever seen an out homosexual before," Mac says. "I was 14. And the first time I saw an out homosexual, [it] was thousands of them all at the same time. So that kind of weird dichotomy of a community building itself and being introduced to that community for the first time, and the community is being torn apart from the epidemic. I thought I wanted to make a show about that."

While singing a popular pub song from the 1790s, Mac has the audience play a drinking game, complete with beer and ping-pong balls.

It took a long time to figure out what form the show should take, but Mac eventually decided on a 24-hour feat of endurance. Each decade is about a different community that builds itself as a result of being torn apart. Mac covers the struggles of groups like suffragists, Jewish tenement dwellers and civil rights activists — but often comes at them from a strange angle. For example, one part of the show is devoted to children's songs that were popular during the era of the Indian Removal Act.

Mac has been performing excerpts of this show all over the world and has picked up raves from the press. But next month is the only time Mac's scheduled to perform the entire 24-hour epic, and he really wants people who sign up for the full performance to stay the whole time. There will be nooks to sleep in and food to eat. People can get up and walk around.

But they'll be moving around anyway. During the decade Braille was invented, Mac blindfolds the audience and makes them play musical chairs. During the tenement section, everyone is directed to crowd together on stage and imitate crying babies.

"It's the genre of the ridiculous," Mac says. 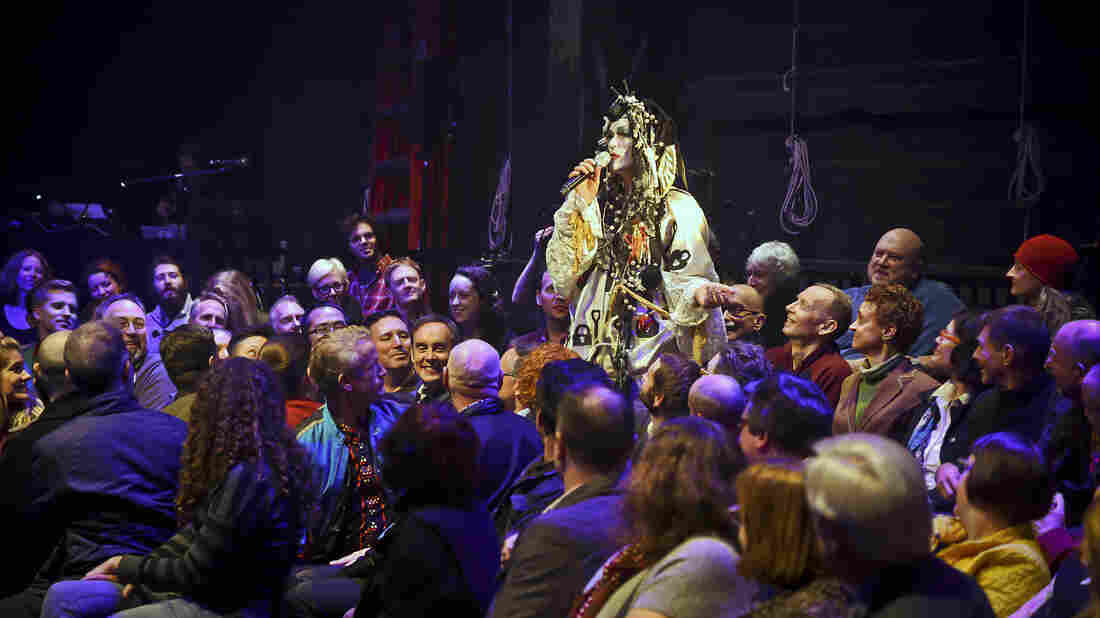 "Because we go through the history all together, and because I make the audience do so many things, they start to get to know each other," Mac says. Jim Norrena/Courtesy of the artist hide caption 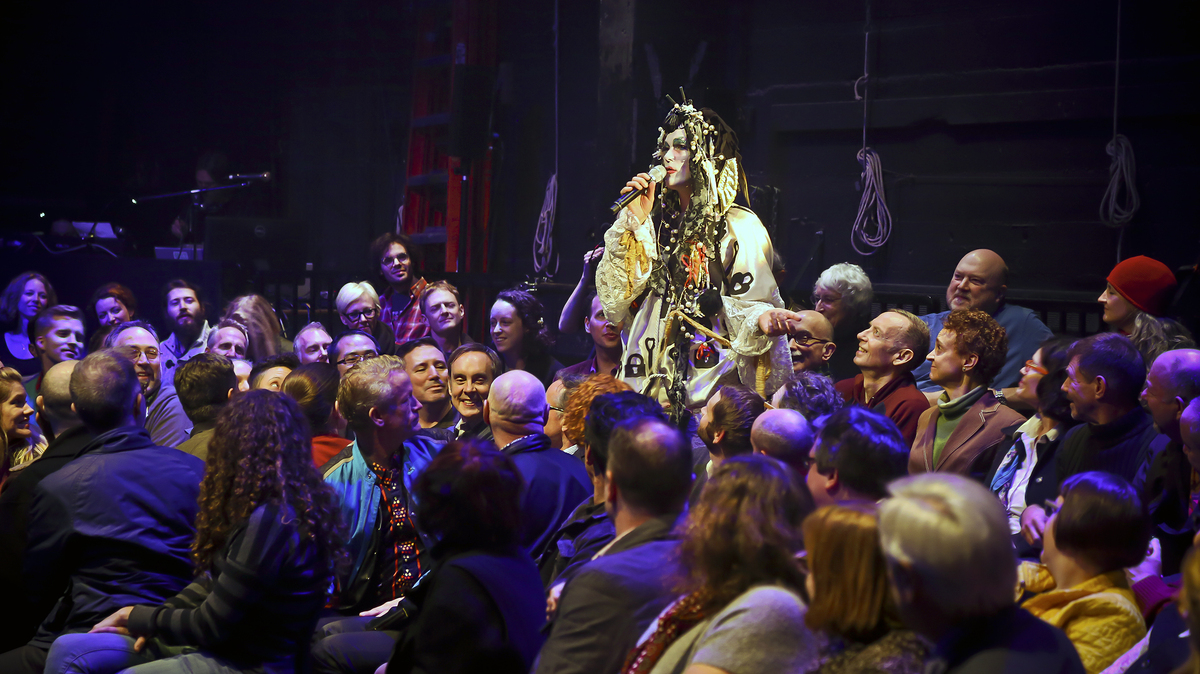 "Because we go through the history all together, and because I make the audience do so many things, they start to get to know each other," Mac says.

Jim Norrena/Courtesy of the artist

Mac even finds it useful to add a dose of the absurd to serious topics like slavery, the Trail of Tears and internment camps. "Sometimes you have to show the ridiculousness of something to expose it," he says. "So sometimes you have to exaggerate something in order to show what the thing is."

That principle extends to the outfits: headdresses, gowns, elaborate makeup and plenty of glitter, all created by Mac's longtime costume designer, Machine Dazzle. Mac's physical presence is a spectacle — not exactly a clown, and not quite a drag queen — and it can be difficult to pin down the artist's gender, or genre. And there's a completely different look for every hour (including a couple dozen pairs of high heels). Mac's Civil War costume includes, surprisingly, a hot-dog headdress.

"Yeah, [Dazzle] tends to do some research about, you know, German immigration at the time, so hot dogs were being sold on the street to make people money," Mac says. "That's how it became a thing." As for the barbed-wire-inspired skirt that goes along with it? Yes, barbed wire was also invented in that era. And Mac says the ketchup-inspired fringe dripping off the headdress looks a bit like blood in the right lighting — appropriate for a decade about the Civil War.

In Act V, Mac juxtaposes an antiwar song from World War I with the response that Teddy Roosevelt commissioned.

After working for years to craft a show that tells the story of America through music, Mac is resistant to the idea of a single historical narrative.

There's a lot about this show that Mac is still unsure about. And he's embracing the uncertainty. He doesn't even know whether he can make it through 24 hours — he says it could just be the audience singing by the end. But when the performance does become ragged and things start to fall apart, Mac hopes the community he is building inside that Brooklyn theater will come together and hold each other up.

Taylor Mac is presenting a few decades each night all this month at St. Ann's Warehouse. He'll perform everything from 1776 to the present day in 24 hours, starting Oct. 8.

An earlier version of this story attributed the description of Taylor Mac's Civil War costume to Machine Dazzle. In fact, Mac himself described the costume.