Accessibility links
Conservatives File Voter Registration Lawsuits That Liberals Say Are Blocking Votes "This is an effort to make the voter rolls cleaner ... before the elections in November," says J. Christian Adams, president of the Public Interest Legal Foundation, the group behind the suits. 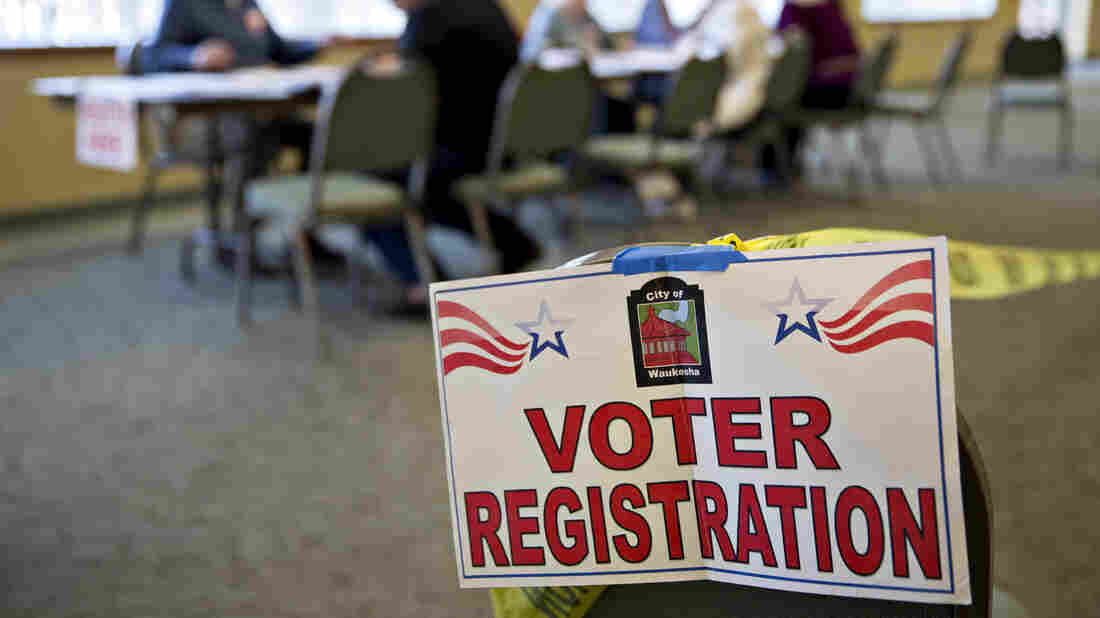 A voter registration sign hangs near a table where residents fill out paperwork at a polling location during the presidential primary vote in Waukesha, Wis., on April 5. Daniel Acker/Bloomberg via Getty Images hide caption 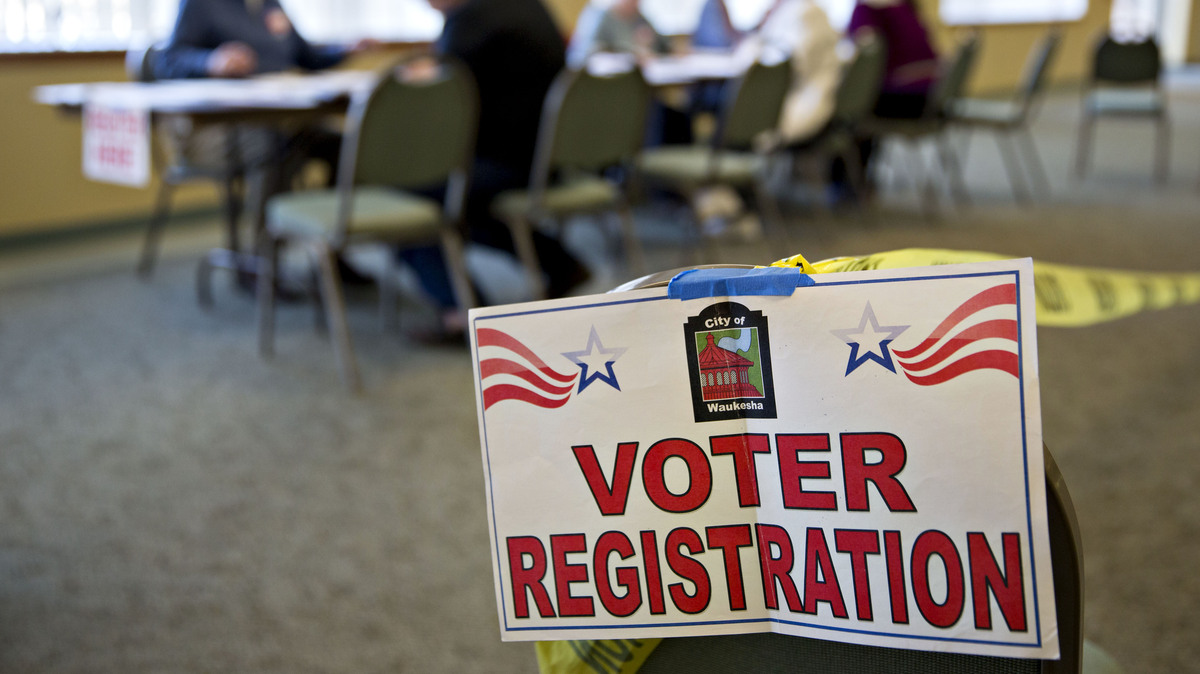 A voter registration sign hangs near a table where residents fill out paperwork at a polling location during the presidential primary vote in Waukesha, Wis., on April 5.

It's no secret that voter registration lists are filled with inaccuracies. People move. Or change their names. Or die. But it can take months if not years for the rolls to get updated. Now, conservative groups are taking a number of election officials to court, saying they're not doing their jobs. Liberal groups think the real purpose is to make it more difficult for some people to vote.

The lawsuits have targeted about a dozen counties so far in Texas, Florida, North Carolina and Mississippi. And even some cities, such as Philadelphia and Alexandria, Va.

"This is an effort to make the voter rolls cleaner and to follow federal law before the elections in November," says J. Christian Adams, president of the Public Interest Legal Foundation. His group is behind the suits, along with the American Civil Rights Union. Adams is a former Justice Department official who has been at the forefront of efforts to restore what he calls "election integrity."

Adams says they have identified over 200 counties that have more registered voters than they have residents.

"We're asking states and local officials to comply with the law, to remove people who have died, to look at their citizenship lists, to find out who's on the rolls that shouldn't be on the rolls. Who could be against that?" says Adams.

Stuart Naifeh, senior counsel for Demos, a public policy group fighting some of the suits, agrees that cleaning up voter rolls is important. But he worries these suits aim to go much further. He says many of the lawsuits are directed at low-income, Democratic-leaning counties.

"They are targeting in many cases jurisdictions that don't have the resources to fight back," says Naifeh. "The end goal seems to be getting these kinds of settlement agreements that require the state to do aggressive voter purging."

He argues that can lead to thousands of eligible voters getting tossed off the rolls, something Adams denies.

The main law governing voting lists — the National Voter Registration Act — is specifically designed to prevent that from happening. Naifeh says having more names on a voter registration list than there are voters in a county doesn't necessarily mean an election office has done something wrong.

"It may actually be evidence that they're complying with the law," he says.

They have to try to keep the voter lists as up to date and accurate as possible, while also ensuring that no one is accidentally removed from the list when they're still eligible to vote.

That's because the law prohibits voters' names from being removed until after they have been notified that there's a question about their registration and they fail to vote in two consecutive federal elections. Voters can be removed more quickly if there's concrete evidence they've died, moved or otherwise become ineligible.

The problem is that the NVRA isn't 100 percent clear about the process. David Becker of the Center for Election Innovation and Research says local election officials have a difficult job, trying to strike the right balance.

"They have to try to keep the voter lists as up to date and accurate as possible, while also ensuring that no one is accidentally removed from the list when they're still eligible to vote," says Becker. And with millions of Americans moving and dying each year, it's not easy.

Adams argues that having a messy voter registration list opens the way for voter fraud, although there's little evidence of that except in a handful of individual cases.

One of the counties being sued by Adams' group is Wake County, in North Carolina. Gary Sims, the director of elections there, says his state has a strict system to make sure its voting lists are clean.

"We don't have the option of not maintaining our records. These are automated processes that are put in place and, like I said, very closely regulated by the state board of elections," he says.

For example, if a voter in his county registers somewhere else in the state, Sims is immediately alerted. He isn't sure why his elections board is being sued. He says the problem for rapidly growing Wake County isn't that it has too many names on the registration rolls. It's that it has a lot of eligible voters who have yet to register.