Accessibility links
Review: Drive-By Truckers, 'American Band' American Band, the long-running rock band's 11th album, lives up to its name in how it digests, understands and challenges the notions of what it means to be American. 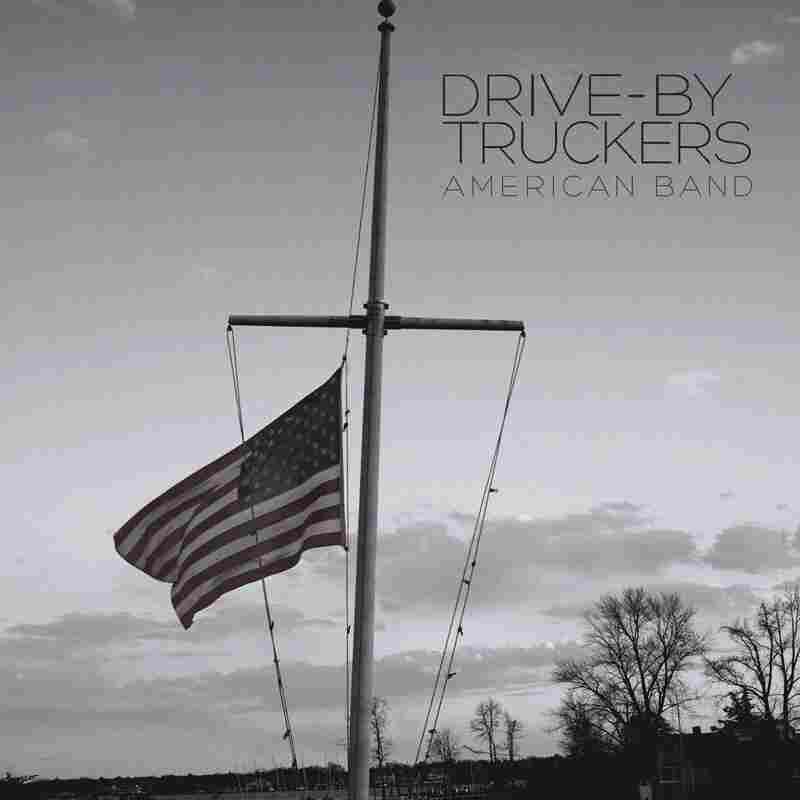 Drive-By Truckers has always been a political band. Even while Patterson Hood and Mike Cooley were writing goofy songs like "Buttholeville" and "Too Much Sex (Too Little Jesus)" two decades ago, they were also calling out Southern character and culture while embracing what they'd soon dub the "duality of the Southern thing." Home is home, for better or worse, but sometimes a home stuck in its ways needs a kick in the ass. It's a unique position for a rock band that writes catchy, foot-stomping rallying cries played not only to Southerners, but also to an increasingly diverse audience. More than anything, Drive-By Truckers' examination of the Southern psyche is a microcosm of how Americans respond to triumph and tragedy.

The Truckers have long worked in history and metaphor to weave complicated morality into its songs, so it shouldn't come as a surprise that the band's 11th album, American Band, explicitly responds to the desperate and ugly climate of our country right now. It joins a line of in-the-moment political records released in the last two decades, where some succeed and continue to resonate (Sleater-Kinney's One Beat, Kendrick Lamar's To Pimp A Butterfly) and others, while admirable in their passion, do not (the rushed hot mess that is Neil Young's Living With War). The fiery first single, "Surrender Under Protest," mashes up a "Lost Cause" catchphrase from Civil War apologists with Civil Rights activists' successful campaign to remove the Confederate flag from the South Carolina Statehouse. When the song came out, a certain segment of fans felt betrayed by Mike Cooley's pointed and damning position. Maybe they hadn't been paying attention — but, then again, it's often easy to recognize and laugh at your own until the words really hit home. And Drive-By Truckers' music hits home, hard.

The Alabama-raised, Athens, Ga.-based band doesn't stop there. Cooley also writes the historical retelling "Ramon Casiano," a muscular piece of Muscle Shoals punk about the late Harlon Carter — a gun-rights advocate and former NRA leader — who shot and killed a 15-year-old Hispanic boy, but escaped incarceration. Just after "Surrender Under Protest," Patterson Hood's "Guns Of Umpqua" is a sobering examination of the horrific shooting at Umpqua Community College in rural Oregon last year. The song is written with his poetic far-away glance, but it's poignant in its scene-setting: "Made it back from hell's attack in some distant bloody war / Only to stare down hell back home." Hood's soft, nearly defeated mood continues with the lonesome, hushed howl of "What It Means," which questions the point of human progress when young black men like Michael Brown and Trayvon Martin are killed: "We're living in an age where limitations are forgotten / The outer edges move and dazzle us / But the core is something rotten."

Cooley's no-holds-barred approach yields some of Drive-By Truckers' hardest-rocking songs in years — the rolling "Filthy And Fried," driven by Jay Gonzalez's B3, and the Southern-rock boogie "Kinky Hypocrite," in addition to the ones previously mentioned — but Hood's contributions are far more subdued. It's said that absence makes the heart grow fonder, and in Hood's case, it may make it wiser, too. After living in the South all his life, Hood moved to Portland, Ore., last year. The change of scenery has helped yield what might be his greatest song; it's about not just the South, but forever being a Southerner. The moody and soulful "Ever South" is an immigrant song that reaches back to his Scotch-Irish roots and hits parallels between that and his move out west, when a family's brighter future is suddenly judged on those roots. Generations apart, those prejudices remain, but history allows us to "Tell you stories of our father and the glories of our house / Always told a little slower, ever south."

American Band lives up to its name in how it digests, understands and challenges the notions of what it means to be American. In short, it's complicated. In the band's ambition to be current, to speak hard truths without metaphorical tangles, American Band is still remarkably nuanced in its quiet and not-so-quiet anger. This is and has always been Drive-By Truckers' creed. Now, it's time to challenge the audience that always took "the duality of the Southern thing" for granted.