Accessibility links
'The Magnificent Seven': Because 'The Pretty Good Seven' Didn't Test Well I Haven't Seen The First Six Yet! Director Antoine Fuqua remakes the classic 1960 Western; our critic calls it a "fun but nonessential" example of "high-grade pulp." 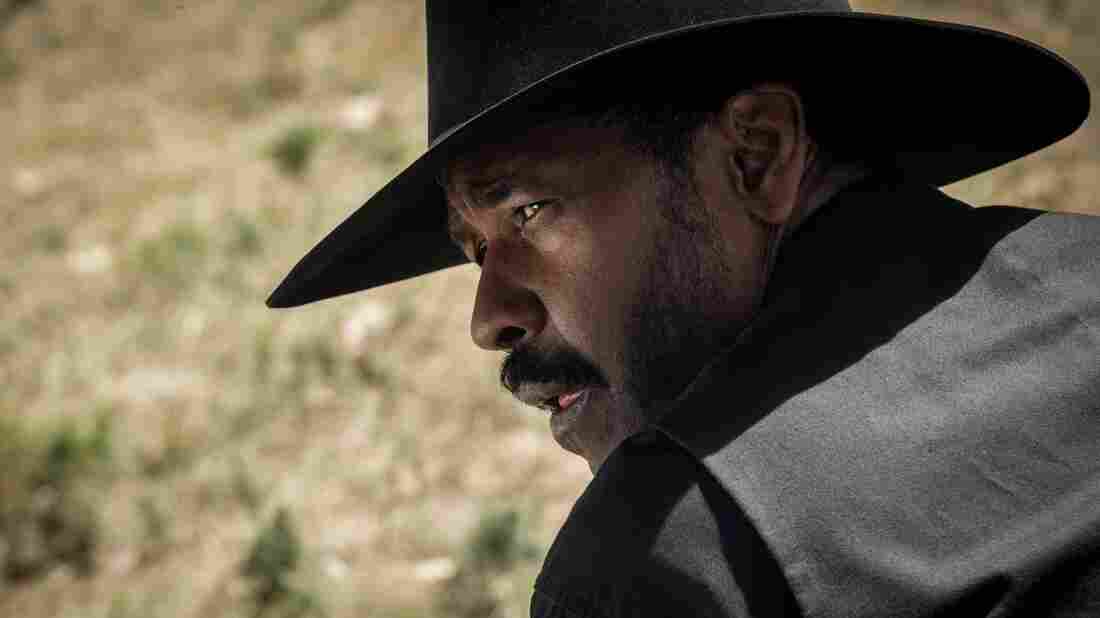 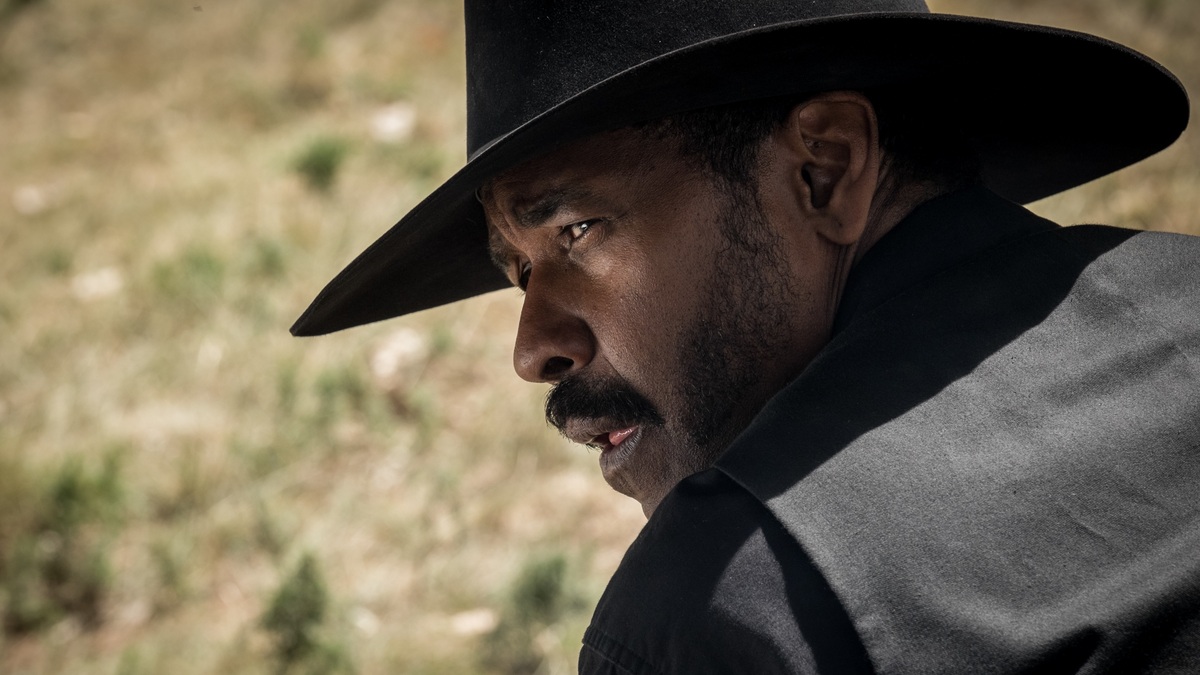 Even 60 years ago, there were westerns that interrogated the genre's veneration of masculinity and might-for-right.

The Magnificent Seven wasn't one of them.

Arriving seven years after the pacifist fable Shane but two years before the myth-busting The Man Who Shot Liberty Valance, John Sturges' 1960 classic is basically a what-you-see-is-what-you get paean to brotherhood and violent sacrifice. It's about a small pack of wolves, led by Yul Brynner and Steve McQueen, that decides to protect a flock of sheep from a big pack of wolves led by Eli Wallach. That's all, and that's enough.

As in its source text — Akira Kurosawa's 1954 Seven Samurai — what motivates these soldiers of fortune remains largely opaque. (Not fortune. Penance, maybe.) The besieged farmers who beg for their assistance can't afford them, but will give what little they have. "I've been offered a lot for my work, but never everything," says Brynner.

William Roberts wrote that line, one of a handful that screenwriters Richard Wenk and Nic Pizzolatto were smart enough to retain for Denzel Washington in their fun but nonessential new version, the star's third collaboration with Training Day and The Equalizer director Antoine Fuqua. Fuqua and Washington are a good team: They haven't made a masterpiece together — the first 70 minutes or so of Training Day are great enough to make you mad when that movie doesn't go the distance — but they turn out high-grade pulp, present company included.

Their new Magnificent Seven is less white than the old one, obviously. It lets a woman (Haley Bennett) fire a rifle and even speak a few substantive lines. Inevitably, it insists on developing its heroes' backstories in greater depth than its forebear. (Expect an "origin story" prequel to be put in development for each of them if the movie is a hit.) And yet for all that tinkering — some profitable, some merely decorative — The Magnificent Seven '16 still feels surprisingly unreconstructed. It tips its hat to Django Unchained, but it's not a revisionist western.

Nor is it an anti-western.

At least I think it is. So costly is its final battle, in lives and infrastructure, that you have to wonder whether the peace-loving homesteaders of Rose Creek circa 1879 might've fared better if they'd just taken evil mining mogul Bartholomew Bogue's lowball offer for their land and hit the road like he asked. Does the suggestion that all this crisply shot, adroitly edited killing and suffering might ultimately have been pointless make the picture revisionist? A truly abysmal bit of closing narration, seemingly borne of some executive's note that someone in the movie must speak the word "magnificent" at some point, answers that question: Nope!

It pains me to report that the movie lacks (until the end credits) Elmer Bernstein's heroic theme music, familiar from decades of Academy Awards telecasts. The composer James Horner, who has written more sweeping, romantic adventure scores than anybody in the last 30 years, was commissioned for this movie. Sadly, he died in an airplane crash last year. His arranger Simon Franglen finished the film's music, with ersatz results.

The villain Wallach played all those decades ago was a bully who stole from the poor, but he was also a man of his word who in the end was just trying to keep his starving soldiers fed. That's not antagonistic enough an antagonist for the Age of Ultron, apparently, because Fuqua & Co. go to comic extremes to make their malefactor truly satanic: Bogue runs a mining company, first of all, dismissing claims he's polluting Rose Creek's water supply. In the film's prologue, he and his henchmen burst into the town parish, manhandle a child, spit tobacco on the floor, and then beat and/or shoot several unarmed civilians before setting the church on fire. Most damning of all, he wears the face of Peter Sarsgaard, whose soft features peg him in movie-language as a predatory creep just as surely as Washington's symmetrical mug makes him a man of virtue.

Good news: Denzel looks great beneath a Stetson, on top of a horse. Who cares that at 60-plus, he's more than 20 years longer-in-the-tooth than Brynner was? He's still the most quietly commanding presence in movies. He's grown a glorious pair of mutton-chops and learned to twirl a Colt Peacemaker, and that unhurried, shoulder-sloping gait of his suggests he should've been starring in westerns all along.

Ultimately, this kind of movie sinks or swims on the chemistry among its band of brothers. On that score, this one is a winner. A magnificent four-sevenths of them are now men of color, which — perhaps anachronistically — evokes little comment from the mostly-white villagers. Though the screenwriters have given them all new names, most of them map easily onto the lineup from the original Seven. Washington is Brynner, obviously, down to the all-black wardrobe. Chris Pratt is McQueen — no longer a mere gambler, but a rakish skirt-chaser and an amateur card magician, too. (He does more winking and mugging in this 133-minute movie than McQueen did in his 25-year career. At one point, he vows to an enemy, "You'll be murdered by the world's greatest lover," a line that would've been too embarrassing for Roger Moore. But since he didn't smile even once in Jurassic World, we'll allow it.)

South Korean star Byung Hun Lee fills what was James Coburn's part, the quiet guy who's good with a blade. Ethan Hawke takes over for Robert Vaughn as the shell-shocked Confederate deserter. (It's fun to see Washington and Hawke together again, 15 years after they both got Oscar nominations for Training Day.) Rounding out the team are Vincent D'Onofrio as a weirdo trapper who speaks like his lungs are full of helium, Martin Sensmeier as a Commanche warrior who has left his tribe, and Manuel Garcia-Rulfo as a Mexican bounty hunter. Everyone looks authentically sweaty, not to say glossy.

Fuqua is smart enough to let us get to know each of them through behavior rather than dialogue, and he's in no hurry to get to the bloody confrontation. There's substantial pleasure, and humor, in the scenes where these soldiers try to shape the villagers into a militia that might have a prayer of fending of the mercenary battalion just a few days from their door.

If we've somehow gone almost 60 years without an officially licensed Seven Samurai/Magnificent Seven update, it's only because its imitators are legion. The Magnificent Seven spawned three official sequels and innumerable unofficial ones. Fuqua's own Tears of the Sun, from 2003, was about a SEAL team that decides, against orders, to defend a group of refugees threatened with genocide. Counting team leader Bruce Willis, there were eight of them, and the setting was 21st century Nigeria rather than 19th century Mexico or 16th century Japan ... but it was still Seven Samurai in everything but name. The 1980s NBC series The A-Team retold the second half of The Magnificent Seven weekly for five seasons — a lot longer than CBS's official Magnificent Seven TV spinoff lasted.