Accessibility links
Amid A Business Boom, A Wealth Gap Between Races Leaves Some In Boston Struggling The growing gap between America's rich and poor plagues many cities, including Boston, where the economy is flourishing. But a legacy of racial discrimination has left a huge wealth divide. 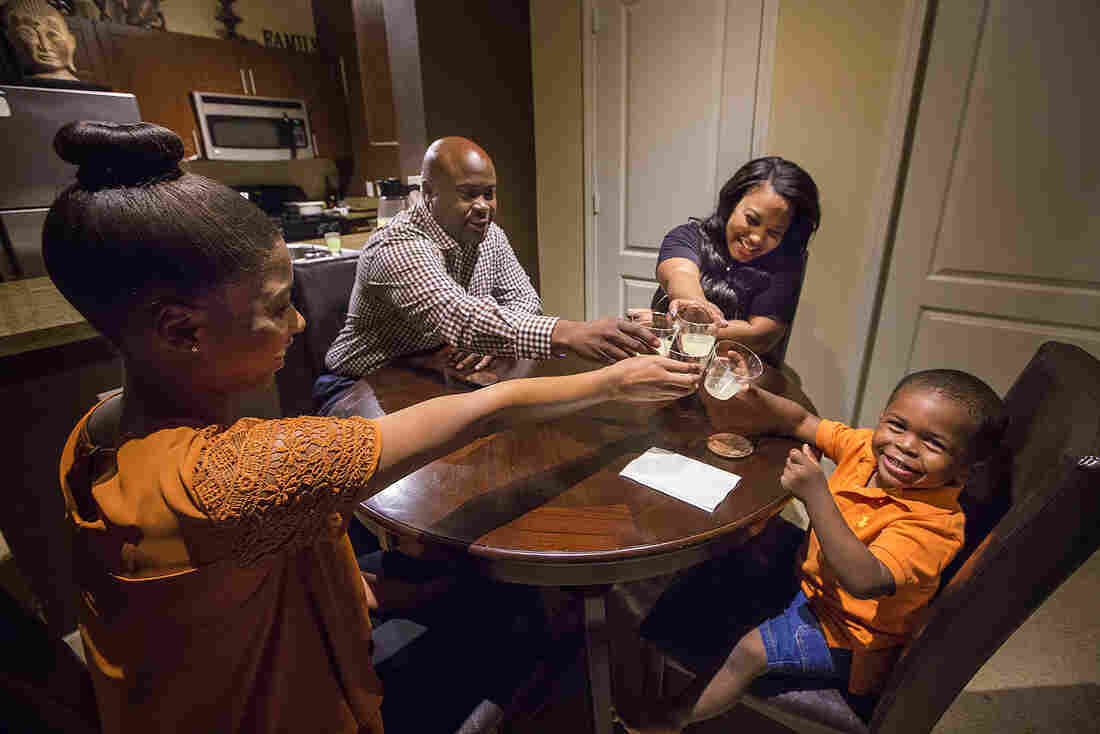 J'Nye Sibley, 14 (from left), Wedly Seney, J'Neen Skinner, and Loyalty Seney, 2, toast around the table. J'Neen Skinner says she and her husband are struggling to buy a house. Jesse Costa/WBUR hide caption 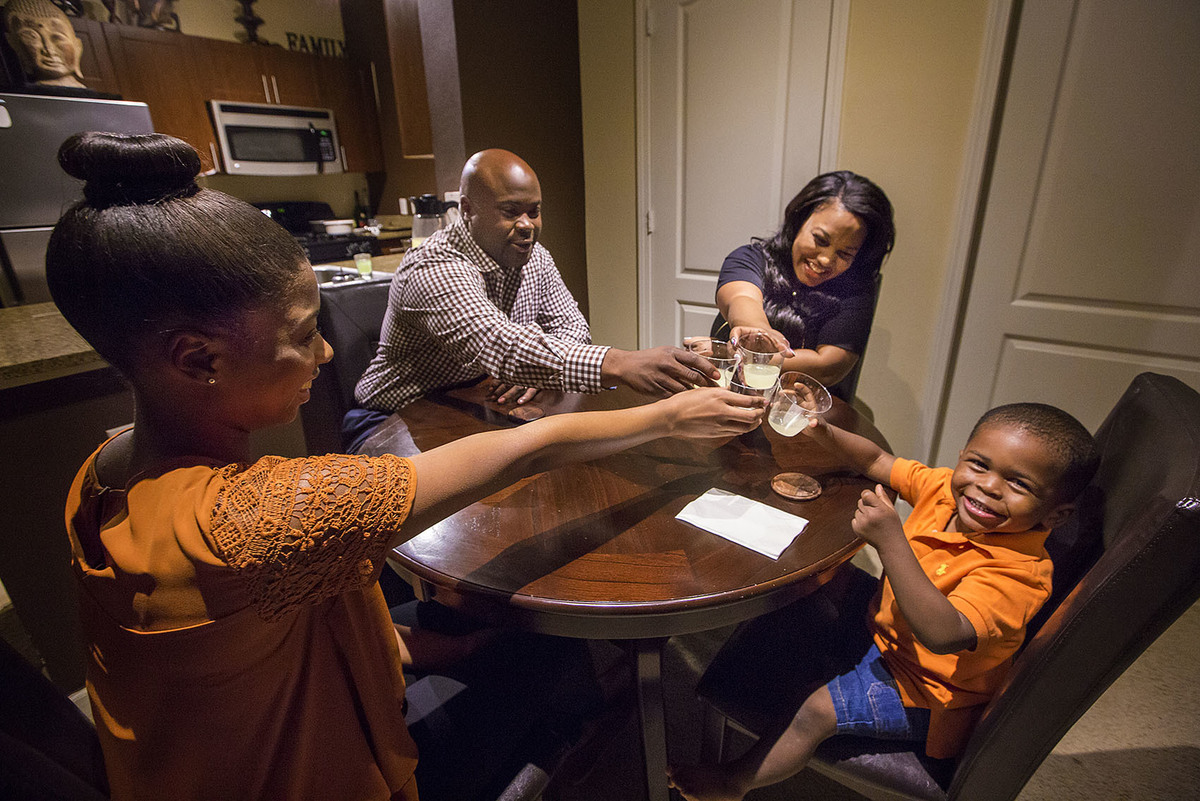 J'Nye Sibley, 14 (from left), Wedly Seney, J'Neen Skinner, and Loyalty Seney, 2, toast around the table. J'Neen Skinner says she and her husband are struggling to buy a house.

Boston's high-tech economy is flourishing and real estate prices are soaring, but a legacy of racial discrimination has worsened a huge wealth divide.

South Boston's waterfront is the heart of the city's innovation district, the home to biotech and financial services companies — and proliferating steel and glass office towers and luxury condominiums.

The U.S. Chamber of Commerce ranks Boston as the American city best positioned to lead the shift to a digital economy, thanks to this innovation boom.

"So I think it's a significant moment that says to anyone who's thinking about where they either want to do their startup, locate their company that Boston is now the place to be," says Jim Rooney, president of the greater Boston Chamber of Commerce.

But J'Neen Skinner and her husband represent another side of this economy. Not long ago, Skinner, who is African-American, and her husband, who's the son of Haitian immigrants, were both unemployed and counted on food stamps, cash assistance and public housing.

Things are better now. They both have jobs at a nonprofit in Boston and have their sights set on a key piece of the American dream. "Currently, we're looking to buy a home and it is quite a struggle across the board," J'Neen Skinner says.

It's a struggle because Boston has some of the highest housing prices in the country. And because when times were tough, J'Neen Skinner and her husband relied on credit cards to pay their bills — and fell behind. Skinner also has more than $30,000 in student loans, so their credit score is too low to qualify for a mortgage.

"We were both not educated on the importance of having a high credit score," she says. "So we are diligently working on paying off past-due balances."

And so that's a snapshot of Boston's divided economy: the city's innovation district, building enormous wealth for some and J'Neen Skinner, struggling to buy a house. 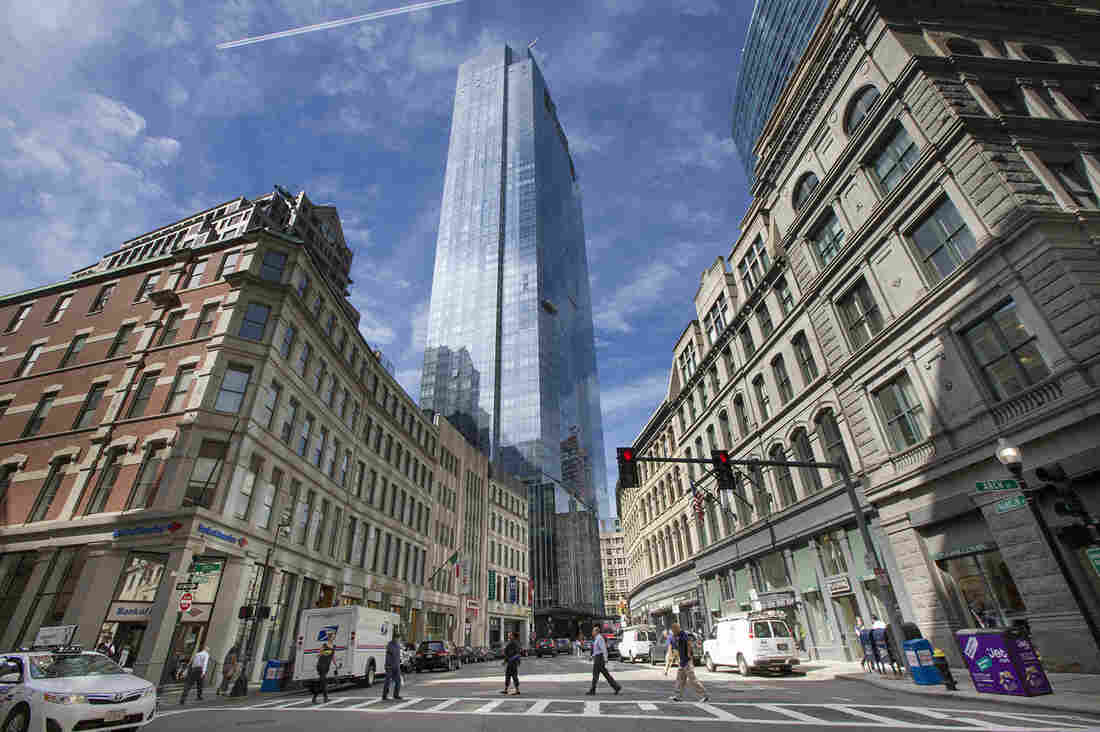 The Millennium Tower looking down Franklin Street in downtown Boston. The city has seen a tech boom and housing prices have also increased over the past few years. Jesse Costa/WBUR hide caption 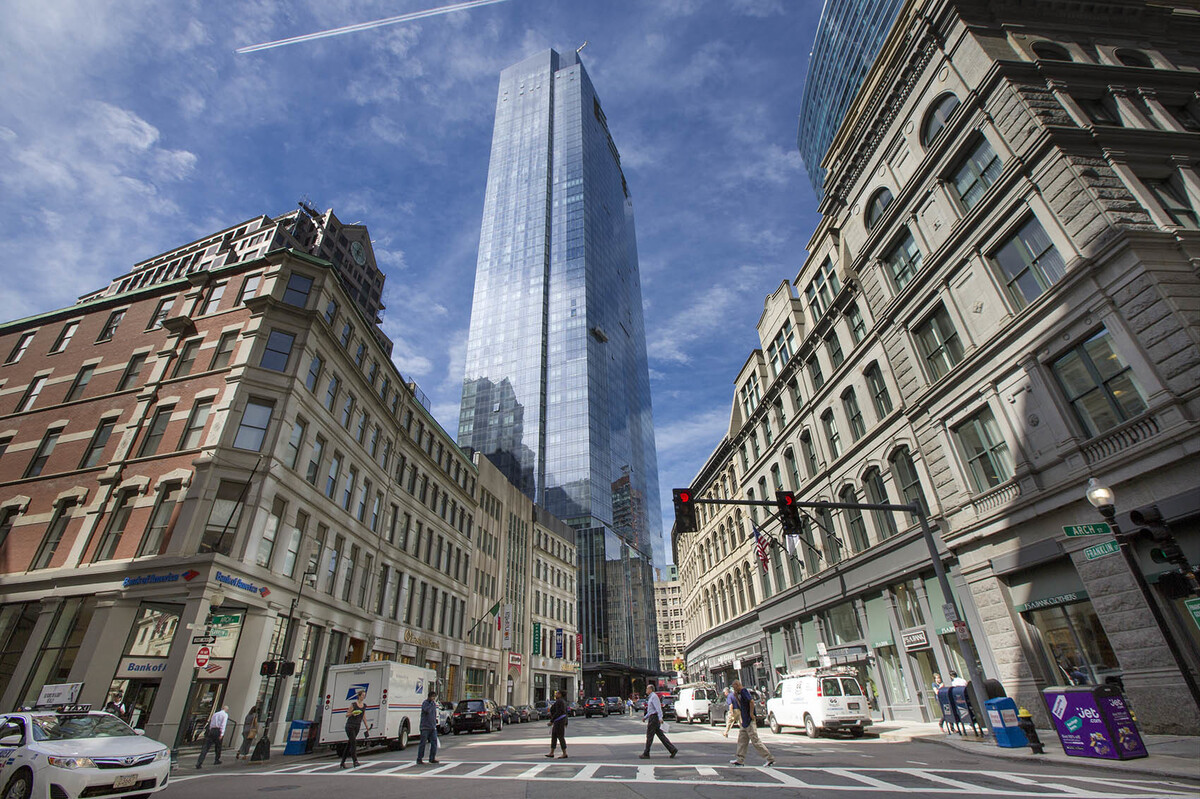 The Millennium Tower looking down Franklin Street in downtown Boston. The city has seen a tech boom and housing prices have also increased over the past few years.

Ana Patricia Muñoz, an assistant vice president of the Federal Reserve Bank of Boston, says it's just one story about the dramatic disparity in wealth.

"And when you get deeper into the data, you really realize that the racial differences and ethnic differences are immense," she says.

Muñoz is the author of a study called "The Color of Wealth in Boston." Among the key findings: The city's white households have a median net worth — the value of their assets minus their debts — of about $250,000. The median net worth of black households: zero.

And almost 80 percent of white families own a home, while just a third of black families do. Muñoz says that means blacks have much less ability than whites to pass wealth on to their children — perpetuating the racial wealth gap.

By contrast, consider the experience of Setti Warren, who inherited his home in Newton, a wealthy Boston suburb. "I think about my story and how fortunate I've been because there's no way my wife and I would be able to afford to live in that house right now if not for the intergenerational transfer of our home," he says.

Warren is not just a fortunate homeowner in Newton, he's the mayor, and he's African-American. But he's keenly aware of the racial wealth gap and that too few blacks are in his position. He says his father was a Korean War veteran who bought the family home with the help of the GI Bill.

"This idea that if you work hard, you're able to take care of yourself and you're able to ensure that your child's life will be better off than yours. That story is something that we're losing," Warren says.

The reasons for the wealth gap are many and complicated, including racially discriminatory housing and lending policies of the past. The report from the Boston Fed calls it a public policy challenge requiring immediate attention.