Accessibility links
Hillary Clinton Puts Focus On 56 Million 'Invisible' Voters With Disabilities By delivering a major address on issues around disability and employment, Hillary Clinton put a focus on a large group of voters who often feel ignored. 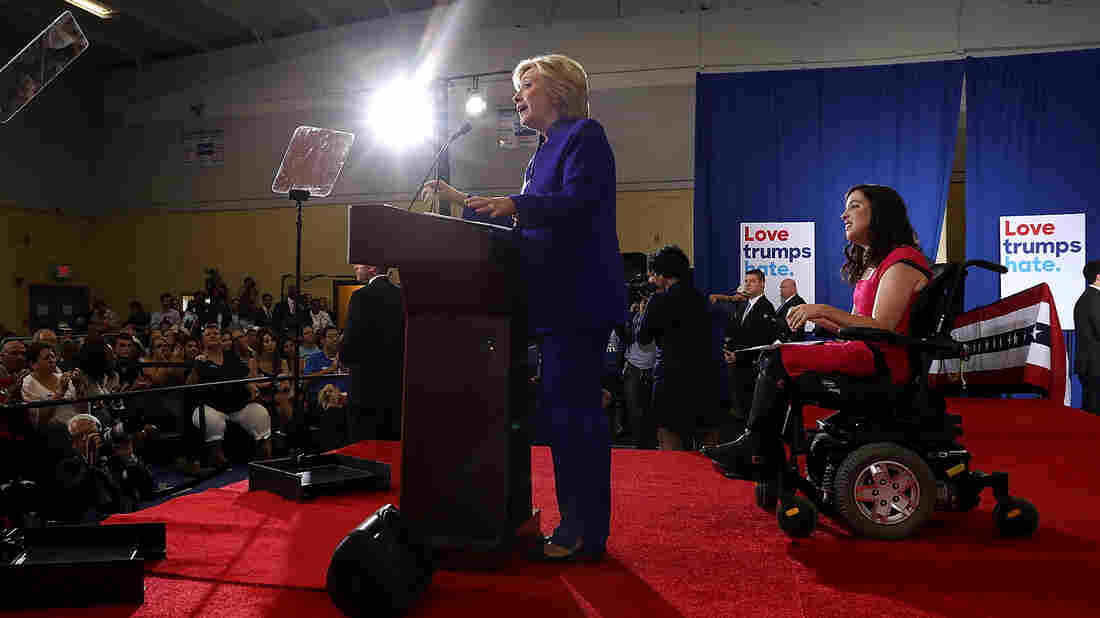 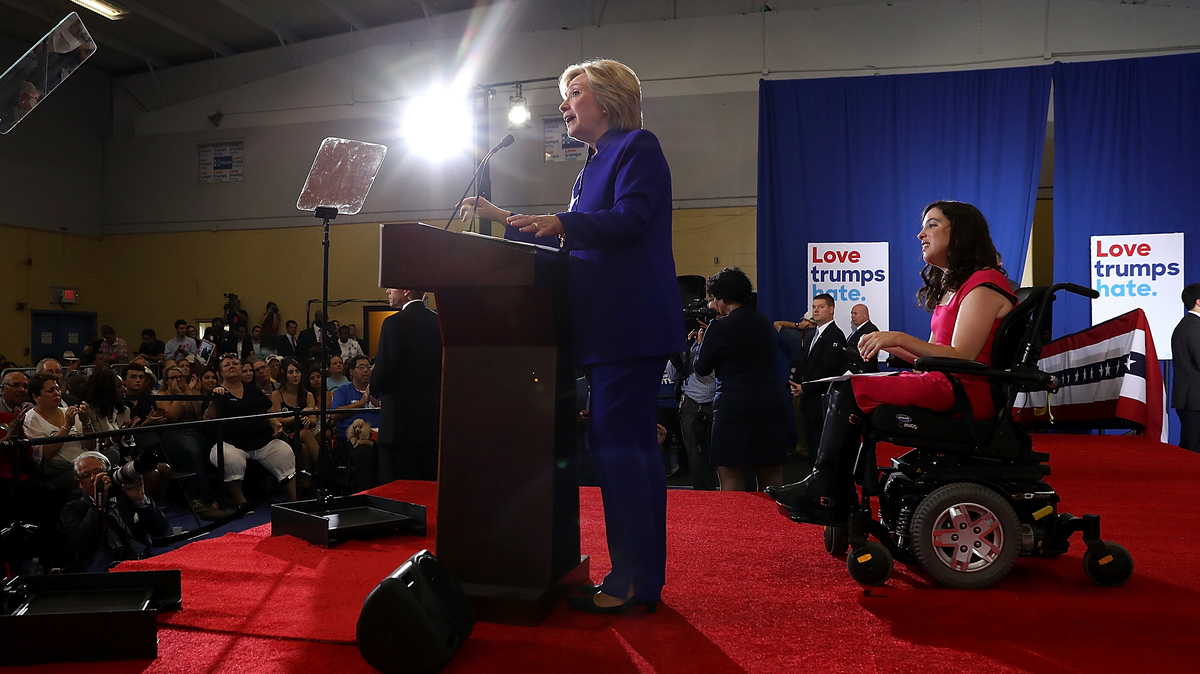 Democratic presidential nominee Hillary Clinton speaks during a campaign event in Orlando, Fla., on Wednesday, where she discussed economic opportunity for Americans with disabilities.

For Emily Ladau, Hillary Clinton's speech on Wednesday about an inclusive economy with greater opportunities for those who are disabled wasn't just any candidate speech. It was a speech targeted directly at her.

"This has been my life since the moment I was born," says Ladau. "The reality is that I'm sort of a political statement on wheels, whether I want to be or not."

Ladau was born with a genetic physical disability and uses a wheelchair. She is a writer and disability advocate.

People with disabilities and the issues they face have played a more prominent role in this presidential campaign than those in the past. It's something those in the disabled community celebrate, with caution.

Leading into the Clinton speech, Ladau says, there was quite a buzz in the disability community.

"This is starting to indicate that we are being taken seriously as a large population, as a group of voters who can legitimately contribute to the outcome of the election," says Ladau.

She says there was excitement about the focus but also concern it could just be a feel-good moment for a candidate looking to humanize herself.

One in five Americans has a disability. Add in their loved ones, and, advocates argue, this is a potentially powerful voting bloc. For much of the campaign, though, most of the focus on people with disabilities has risen out of Donald Trump's mocking of a disabled reporter. It spurred condemnation and a near constant stream of TV ads featuring the Republican nominee crumpling his arms and jerking around on stage at a rally last year.

This ad from the Clinton-allied superPAC Priorities USA features the parents of a girl born with spina bifida.

It's hard to keep track of all the ads that have aired with that video clip of Trump. A recent Bloomberg poll found more than 60 percent of those surveyed were "bothered a lot" by the mocking.

Whether Trump's controversy has prompted the Democratic nominee to engage more on disability issues doesn't much matter to Jennifer Laszlo Mizrahi, president of the group RespectAbility.

And as she sees it, Clinton and her campaign are going deep. She describes it as "absolutely unprecedented" for a presidential campaign to put this much focus on voters with disabilities, putting captions on the screen for all of its online videos, answering her group's candidate questionnaire with a high level of detail, proposing a plan to support people with autism, and giving a major address on the economic challenges faced by disabled Americans. Mizrahi wishes the Trump campaign would do the same.

"They've absolutely missed communicating with 56 million Americans," says Mizrahi. "We've done polling. We see a lot of them are Republicans. The largest group are the undecided swing voters."

Mizrahi says she has been trying to get the Trump campaign to respond to her group's candidate questionnaire all year, even this week going to Trump Tower in New York to try to talk to someone. But she says she's been repeatedly rebuffed.

In her speech yesterday, Clinton never mentioned Trump mocking the disabled reporter. But she did talk about creating more opportunities for people who are disabled, "a group of Americans who are too often invisible, overlooked and undervalued, who have so much to offer but are given too few chances to prove it," Clinton said.

Clinton maintained a positive message throughout, threading together familiar stories she tells often on the campaign trail, about her time as a young lawyer working for the Children's Defense Fund, trying to get disabled children access to school, and about some of the people with disabilities she has met, worked with and been inspired by over the years.

"One advocate after another has told me the same thing: 'We don't want pity. We want paychecks. We want the chance to contribute,' " Clinton said. "As president, I'm going to give — give them that chance."

Citing the U.S. Census Bureau, Mizrahi put some numbers on that plea. Only 1 in 3 working-age Americans with a disability has a job, she says. Of those, around 400,000 work in sheltered workshops where it is legal to pay people less than minimum wage.

In her speech, Clinton briefly touched on some of her proposals, which include getting rid of the sub-minimum wage for people with disabilities and building the support needed in Congress for the U.S. to join the United Nations Convention on the Rights of Persons with Disabilities.

In the end, the speech was something of a letdown for Ladau. She wished Clinton, whom she supports, had spent more time diving deep into policy proposals and less time telling inspirational stories about disabled people doing incredible things.

Still, Ladau says, "Clinton's overarching message is valuable and powerful, especially coming from a public figure of her stature."