Accessibility links
As Iran's President Touts Openness, Britons Appeal For Release Of Prisoners Iranian leader Hassan Rouhani was at the United Nations this week encouraging the world to work with Iran. But two British men were also there, appealing for the release of relatives held in Iran. 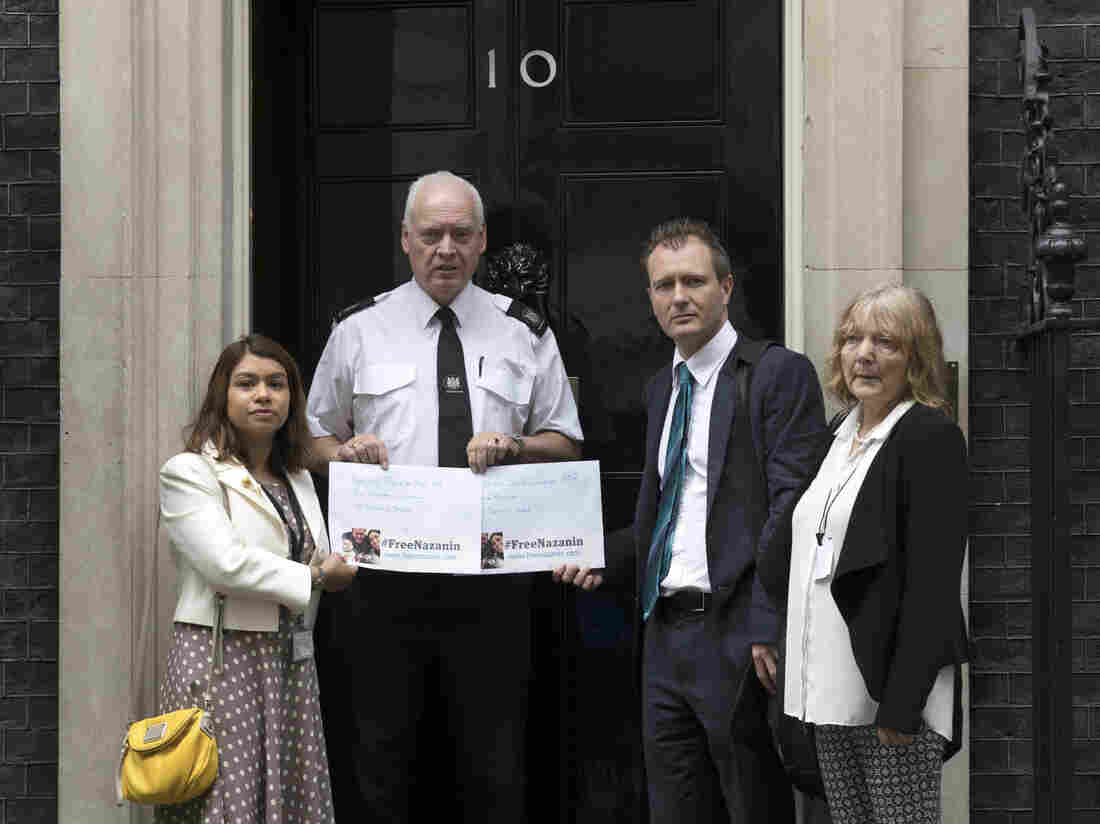 Richard Ratcliffe, second from right, delivers a petition to the British prime minister's official residence calling on Iran to release his wife, Nazanin Zaghari-Ratcliffe. She was stopped in April at the airport in Tehran with the couple's 2-year-old daughter as they tried to return to Britain after a family holiday. Ratcliffe was at the United Nations this week appealing for their release. Carl Court/Getty Images hide caption 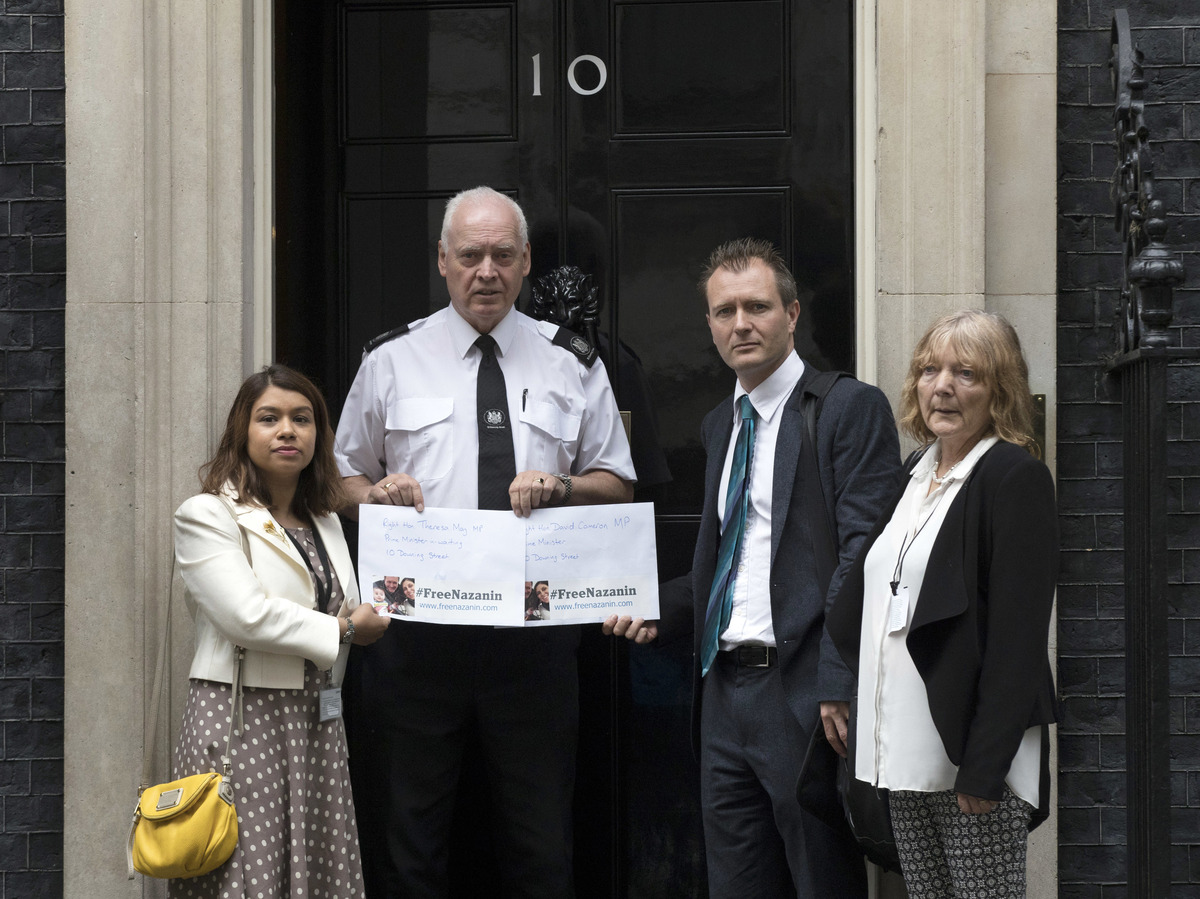 Richard Ratcliffe, second from right, delivers a petition to the British prime minister's official residence calling on Iran to release his wife, Nazanin Zaghari-Ratcliffe. She was stopped in April at the airport in Tehran with the couple's 2-year-old daughter as they tried to return to Britain after a family holiday. Ratcliffe was at the United Nations this week appealing for their release.

Iranian President Hassan Rouhani came to the United Nations to tout his country's nuclear deal with world powers and show that Iran is once again open for business.

But two British families are doing their best to challenge that image.

They, too, were at the U.N. this week, hoping to convince Rouhani that their relatives, held in Iran, should be released.

Richard Ratliffe's Iranian-born wife, Nazanin Zaghari-Ratcliffe, 37, was arrested six months ago while visiting her parents in Tehran. Ratcliffe says officials also seized the passport of the couple's 2-year-old daughter — who is now with her grandparents in Iran.

"[Rouhani's] government is trying to build positive relations and improve things with the West," Ratcliffe says. "I mean your taking a mother and a baby in this way just so gets in the way. I mean it's shameful."

While Rouhani is trying to cash in on the nuclear deal and show the Iranian people the economic benefits of diplomacy, Ratcliffe believes hardliners in Iran are trying to undercut those efforts, in part by imprisoning Iranians who hold dual citizenship.

Zaghari-Ratcliffe works for the Thomson Reuters Foundation, which trains journalists, though Ratcliffe says she wasn't working in Iran when she was arrested. She was recently sentenced by a secretive Iranian court to five years in prison.

"I think she's a bargaining chip," says Ratcliffe. "There's been a foreigner taken there every month since March. She was one of them."

In January, the U.S. negotiated a prisoner exchange with Iran which freed several Iranian-Americans, though several more have been arrested since then. The U.S. at the time also settled longstanding Iranian financial claims in what looked to many critics like a ransom payment.

British officials say Iran is holding five British-Iranian dual nationals. Another is Kamal Foroughi, 77, who was working for a Malaysian energy company when he was arrested and convicted of espionage.

"We have no family in Tehran," says his son, Kamran Foroughi. "We are all living in London and he hasn't seen his wife, children and grandchildren for well over five years."

This is the third year in a row Foroughi has come to the U.N. to press the case for his father's release.

"Its become very urgent because a few weeks ago he was diagnosed with cataracts," says Foroughi. "He needs an urgent operation to avoid blindness. This is a very standard operation that can be done very quickly. But the longer we leave it the more likely it is that he will go blind."

Ratcliffe is worried about his wife's health, too. He says she was too frail to pick up their daughter during a family visit this year. And the rare phone calls he has had with her have been tough.

"She was deeply, deeply sad the previous phone call," says Ratcliffe. "Like desolate. But actually this time she was angry. Which is a sign of being a bit stronger. So she was angry with the British government."

British Prime Minister Theresa May raised the issue when she met Rouhani at the U.N. this week. Following their meeting, reporters asked Rouhani about Zaghari-Ratcliffe and other British nationals held in Iran.

Rouhani also denied they are being used as leverage.

Ratcliffe and Foroughi are meeting as many diplomats as they can to try to press their case. But so far Rouhani is said to be "stonewalling" when asked why so many dual nationals who could be helping Iran open up to the West are instead languishing in jail.