Accessibility links
When Does My State Start Early Voting? Early voting is set to account for one-third of all votes cast this election. Does your state allow early voting? And how do the campaigns use this data? Find out with our complete guide.

What Does Early Voting Data Tell Us?

For those who can't wait to get this election over with, there's good news — early voting is starting.

The bad news: That only applies to you if you live in one of 37 states that offer some kind of early voting (in person, absentee or by mail) without an excuse needed.

More than 1 in 3 people is expected to cast a ballot early this year. On Friday, voters in Minnesota and South Dakota can start turning in absentee ballots. On Saturday, they can do so in Vermont, and ballots will go out in New Jersey.

Voters have already had the chance to go to the polls in Wisconsin Rapids, Wis., which started holding early in-person voting Monday. (In Wisconsin, each municipality and county sets its early voting dates.)

Over the next three weeks, voters in a third of the country will already be able to vote.

Early voting could account for up to 34 percent of the vote this year, according to Michael McDonald, associate professor of political science at the University of Florida and founder of the Elections Project, which tracks turnout.

He predicts that voting methods such as in-person and all-mail ballots will become the future of exercising democracy. There are even states that operate without physical polling locations, relying solely on the mail during an election — Washington, Oregon and Colorado. And as Americans start to cast their tickets (some as early as September), those votes will carefully be dissected by both campaigns.

"Early votes will give us a good contour of who's enthused to show up to vote," McDonald explained.

When the absentee ballots begin to flow in, a campaign could spin the numbers in whatever direction it wants. But those reactions will most likely be overwrought. The Trump campaign could spin mail-in votes as an indicator of the polls being wrong (if they still show Clinton ahead), but that would likely be a false reading, McDonald said. That's because registered Republicans tend to vote by mail in bigger numbers than Democrats, and Democrats tend to use early in-person voting more often.

"Romney in 2012 put out records that he was crushing it in Ohio," McDonald said. "They were saying the polls are wrong, look at how well he's doing there. Well, he lost Ohio."

A point-in-time comparison is a better indicator of how well a candidate is doing in a certain state. By comparing the data and trends of early voting from previous election cycles, the campaigns will know if citizens are passionate enough about their platform to participate in voting — and if campaigns are hitting their marks.

"Early voters are people who have already made up their minds," McDonald said. "Clinton and Trump supporters will vote right now, and it won't matter what happens until Election Day. They're well-educated and dedicated."

This could be a component for each of the campaigns' successes or failures, especially in battleground states that allow early and no-excuse absentee ballot voting. Florida, for instance, saw almost 4 in 10 people vote early (20 percent early in-person, 19 percent absentee). Professor Paul Gronke of Reed College and founder of the Early Voting Information Center told NPR's Scott Simon that Florida could see an even bigger early vote turnout this year.

Early voting could also be a factor in Ohio and North Carolina.

"This is going to change the dynamics in those states, so that you will expect to see early rallies timed when the early voting period opens up," Gronke said, adding that "the candidates' travel schedule will reflect this because they want to follow up that kind of enthusiasm and get people to the polls right away."

It's not clear how the feelings toward these candidates will affect early voting. Partisan divisions are at their highest levels in decades, and although both candidates hold record-low favorability ratings, Clinton and Trump supporters tend to be pretty adamant about their candidate of choice.

The History Of Early Voting

Despite these sizable challenges, 25 Union states passed some form of absentee voting for soldiers battling in the muddy and bloody trenches.

"Some say Abraham Lincoln might not have been elected if they weren't allowed to vote," McDonald said.

Since then, the absentee ballot has evolved to include the sick and the elderly, business people who frequently travel and others who can provide valid reasons for being out of state, like students in college in a different state. There are currently 27 states and the District of Columbia that do not require any reason to request an absentee ballot.

By the 1990s, many states took up early in-person voting measures, which allowed individuals to cast their ballots at a polling location during a specific period of time before Election Day.

Is Early And Absentee Voting Prone To Voter Fraud?

"The only way we can lose, in my opinion — I really mean this — in Pennsylvania, is if cheating goes on," Trump said at a campaign event in Altoona, Pa. "I hope you people can sort of not just vote on the 8th, go around and look and watch other polling places, and make sure that it's 100 percent fine."

But, according to McDonald, the chances of voter fraud occurring at polling locations is slim. 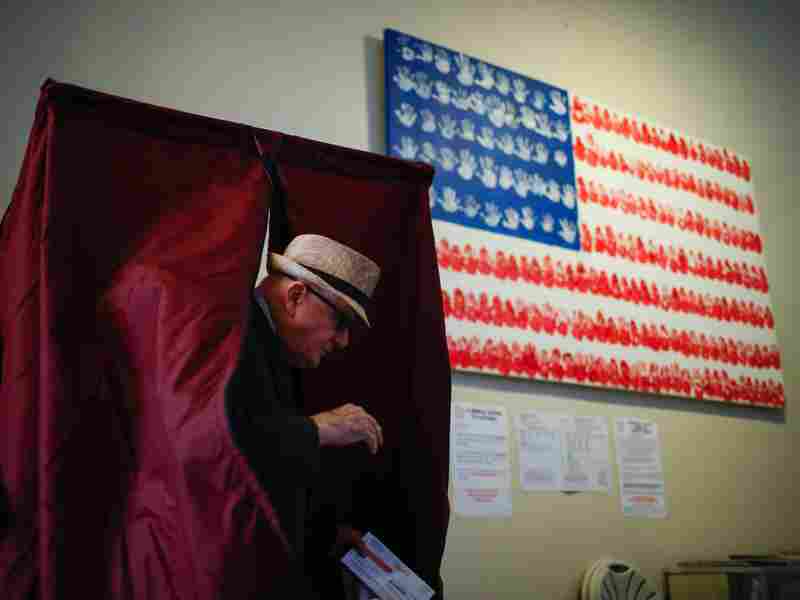 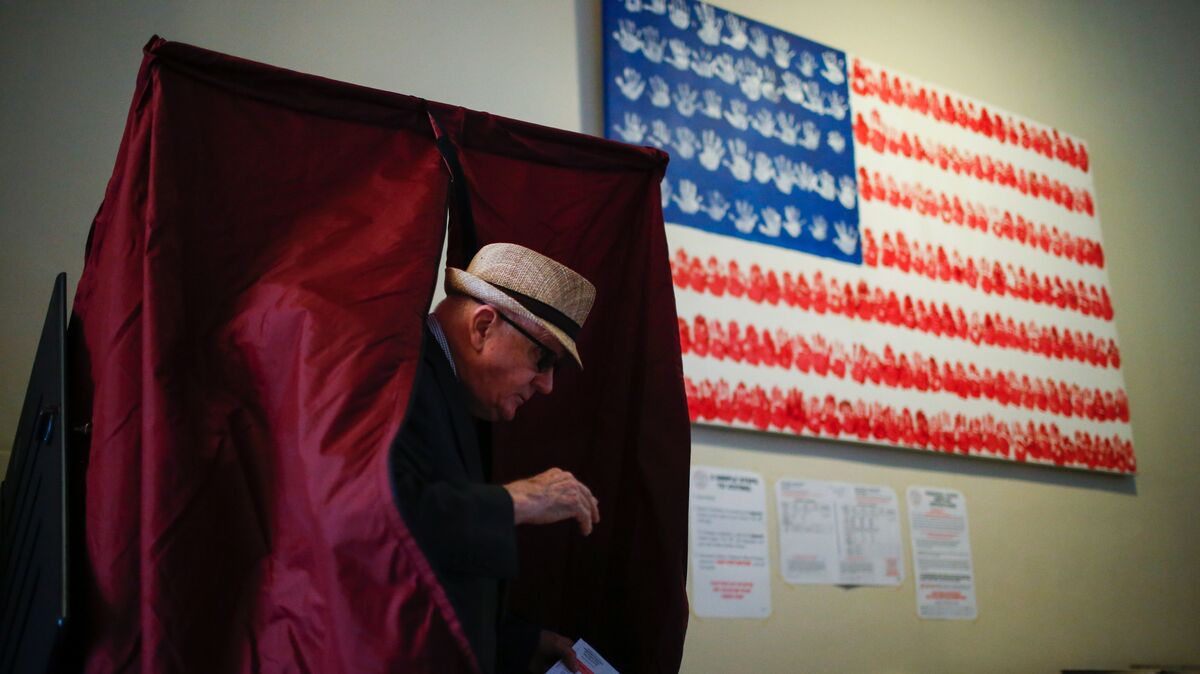 A man casts his ballot at a polling station in Hoboken, N.J., during New Jersey's primary elections June 7.

"If we look at the weakness in the election system," McDonald said, "it's not at the polling places. There is impression fraud, but it's so rare."

So rare, in fact, that there were only about 31 separate incidents of possible voter fraud since 2000, based on data collected by Justin Levitt, a professor at Loyola Law School. This includes general, primary, special and municipal elections from 2000 to 2014.

To put that in perspective, there were 1 billion ballots cast in the general and primary elections during that time. That's 0.000000031 percent.

Some of these incidents may not have been an attempt to actually participate in voter fraud, but could have resulted in data entry errors, a mix-up of matching different people with the same name — or someone accidentally signing in as the wrong person in a poll book.

However, there is a bigger risk of voter fraud when it comes to absentee and mail-in ballots, McDonald pointed out.

"Again, this is small, not a huge problem," he noted. "Local elections are the most vulnerable, not presidential elections."

There are also checks to confirm the authenticity of these ballots. Certain states require people pick up a ballot in person with a valid ID. All absentee and mail-in ballots require a signature that is cross-verified against the voter's voter-registration signature. Any signatures that look suspicious are thrown out.

While voter fraud is one issue, another is whether mail-in ballots are filled out and returned correctly.

"Where most people make a mistake is through the mail," McDonald said. "They won't sign the privacy envelope. People try to save the election board money by putting two ballots in one envelope, but they have to throw that away. It's vital for people to follow the mail procedures accurately."

What's The Future Of Voting?

Vote by mail: Washington state switched to an entirely vote-by-mail system in 2011. Officials noticed that by 1996, more than half of voters were casting their ballots through the mail. It didn't make economic sense for the state to keep its polling places open.

The Internet: It's already being used for military members and certain citizens who live outside the country under the Uniformed and Overseas Citizens Absentee Voting Act. In addition to the ability to return a mail-in ballot (which may be limited to military members who are serving in remote locations), electronic ballot transmission is another option.

If the state does not allow electronic ballot transmission, the voter must print out and assemble a privacy envelope to deliver the ballot, which McDonald said officials call the "origami project." When officials receive the ballot, they check the signature against the one on file with the voter's voter-registration application.

This option is only available for uniformed military (stationed both abroad and domestically) and overseas citizens through the voting act. However, Alaska was the first state to extend the electronic ballot delivery and return option to everyone.

"It starts in the military and goes down to the general public," McDonald said. "That's usually how this stuff happens."

That seemed to be the case with absentee voting and the Civil War. "I believe more states will follow Alaska's lead to expand ballot electronic delivery and return in the future," McDonald said.

But don't expect the transition to occur anytime soon. With the recent hack in Arizona and Illinois voter registration databases and the Democratic National Committee's computer system, tackling the challenges of cybersecurity will likely take precedence over convenience.

When can people start voting? (In-person or absentee drop-off without an excuse)

Oct. 10 – Los Angeles County, Calif. (early voting is set by counties/municipalities. LA County has earliest — until Nov. 7), Maine (until Nov. 7), Montana (absentee ballots set to be available; can be turned in in person), Nebraska (until Nov. 7)

Oct. 19 – Kansas (counties can set earlier dates, goes until Nov. 7), Oregon (most voting is by mail — ballots mailed out, can be dropped off same day), Tennessee (until Nov. 3)

Oct. 21 – Washington state (ballots go out that day and can be dropped off)